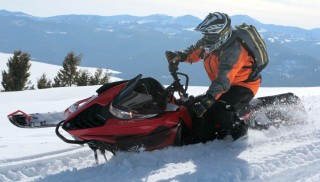 Yamaha has a task ahead of it. The mountain crowd is thronging toward Polaris’ AXYS Pro-RMK and SKS, Ski-Doo’s Gen-4 850 Summit X with T3 and Arctic Cat’s M8000 Mountain Cat and Limited; Yamaha is all dressed up and has no dance to attend high atop the mountain.

Recently, Yamaha released its high-boost and high-horsepower Sidewider M-TX 162 SE, which gives the Yamaha high-altitude hustler a mountain snowmobile that is wild in horsepower. But, it is heavy. In fact, the Sidewinder is 40-plus pounds heavier than the SR Viper M-TX SE we are discussing here – 162 to 162.

With that said, the Yamaha Viper M-TX SE is not a super lightweight snowmobile itself, as compared to the two-stroke mountain snowmobiles from Ski-Doo, Arctic Cat and Polaris. The SR Viper M-TX SE with its 1049cc four-stroke, liquid-cooled three-cylinder motor with fuel injection, is 50-plus pounds heavier than its two-stroke counterparts; and with its 135 horsepower, it falls into the 600 two-stroke motor class.

Before moving on, we must give the new North America Yamaha Snowmobile Corporate folk a small dose of mountain reality. No matter how much boosted non-lag horsepower Yamaha throws to a chassis, or state claims of four-stroke fuel efficiency or environmental greenness, most mountain hungry riders will walk away from Yamaha mountain snowmobiles until these reach sub 460 pounds and are two-stroke powered. You might chat with the YZ250 dirt bike engineers about two-stroke power and come up with a fix. 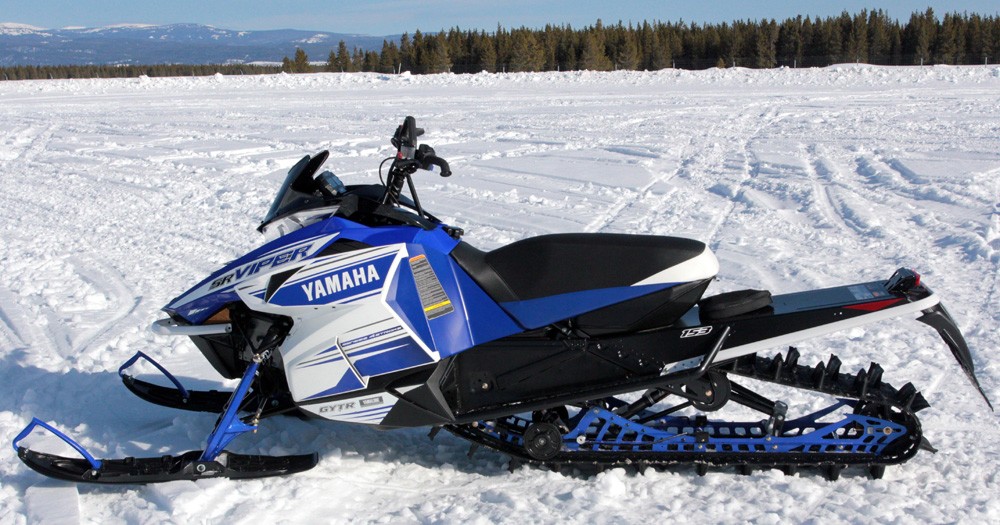 With suggested retail prices of $13,300 to $13,600, USD, it is hard for a customer to justify paying this price for poundage and less horsepower (low power-to-weight performance). For example, Ski-Doo’s high end Gen-4 REV Summit X, with 165 horsepower, and a claimed dry weight of 434 to 441 pounds (depending on track length), has a suggested USD retail price of $12,900.00. Convincing the public to spend an additional $400.00 to $500.00 for more weight and less performance is a steep climb; this is why sales suffer. Yes, Yamaha quality, durability and fit-and finish is an A-plus.

Our rant is done.

There is beauty though, readers. Folks like Troy Johnson, Lincoln County Customs (LCC) of Alpine, Wyo., who is a master Yamaha wrencher and mad mod man, can ante up the SR Viper M-TX SE in stock form and make it run at its full potential. He is not a Yamaha dealer, but is passionate about Yamaha blue. LCC is a highly-credible Yamaha performance shop where Yamaha’s hillclimb team operates from; Johnson is Team Captain, coach and builder.

Also in the Rockies is Outlaw Motor Sports of Enterprise, Ore., a Yamaha performance dealer that elevates the SR Viper M-TX SE snowmobile to that of stock supersled.

Back to Yamaha’s task on hand. Most mountain climbers believe a mountain snowmobile should be powered by a twin cylinder two-stroke motor with at least 800cc. High power-to-weight ratio makes a snowmobile king. We can’t fault mountain riders for this belief. Let’s flip that up on edge; as impartial journalists, we must be independent.

The three-cylinder four-stroke 1049cc electronic fuel injected (EFI) Genesis motor in the M-TX SE works very well. Its lightweight Camoplast PowerClaw track with three-inch tall paddles and Yamaha’s YVXC drive and driven clutches make the SR Viper M-TX SE chassis perform like a much lighter mountain snowmobile with more horsepower and torque. At times, and we’ve been harangued about this by our readers, we find the M-TX to be 700 two stroke-class like; when conditions are right. But for the most part, it is in the 600cc class. 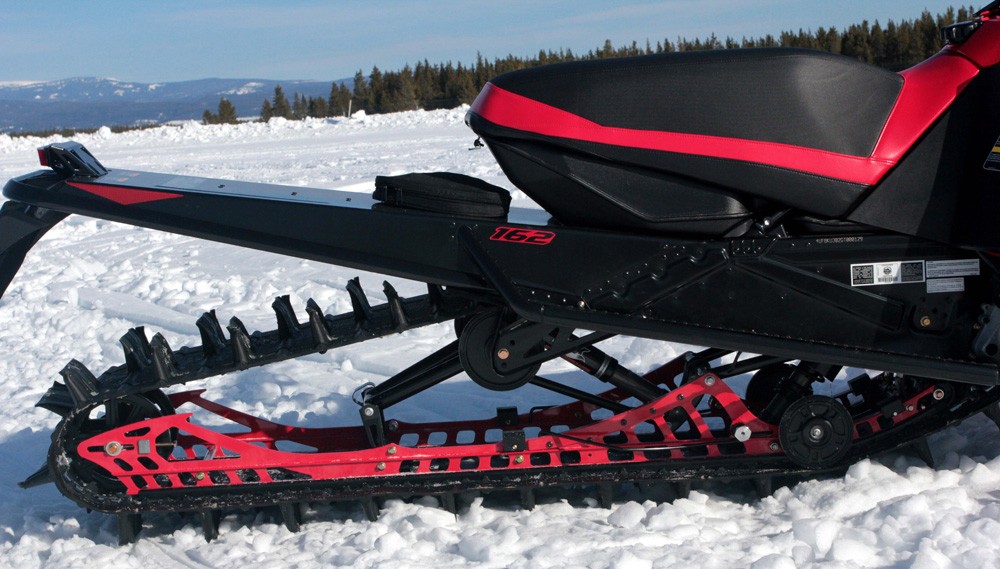 The tall-lugged PowerClaw track with its three-inch paddles work well with the torque-filled motor. Four-stroke power likes to bump along in low RPMs.

Prior to 2017, customers who ordered an M-TX on Yamaha’s Spring Buy Power Surge program (2015 and 2016), could opt in for a Mountain Performance Inc turbocharger kit for an added $2,500, and have the receiving Yamaha dealer install the turbo kit while maintaining factory warranty on the M-TX. This has come and gone, as the big boosted Sidewinder M-TX SE replaces this; MPI kits are not available from Yamaha, only from MPI and its dealers.

In its third year of production, the SR Viper M-TX comes in an SE package only, and in two tack lengths, 162 and 153. Gone is the high-end lux LE and the introductory Standard, and with that, the M-TX SE 141, which was more crossover than mountain. Basically, Yamaha is putting on some skinny jeans by narrowing its model line to those mountain mashers the public actually purchases. We were a little bummed knowing the all-black Standard went away, as this was a favorite M-TX; its coil over shocks on all corners gave it the best ride.

Rear suspension and front suspension changes, which began in 2016, make the M-TX SE smart, in that sidehilling, turning and bump soak enhance deep-powder, boondocking and sidehilling. Track tension is better managed as the suspension travels through its stroke.

Specifically, The SR Viper M-TX SE has forged-aluminum spindles that are tilted back 10 degrees from the 2015 spindle, and are angled in at mid-height to be flush with the lower side panels. These spindles are 2.4 pounds lighter than the 2015s and have new lower and upper control arms. The titled back spindles and control arms bring a light and airy feel to the M-TX SE. This is the same judgement we had for the 2016 M-TX line. 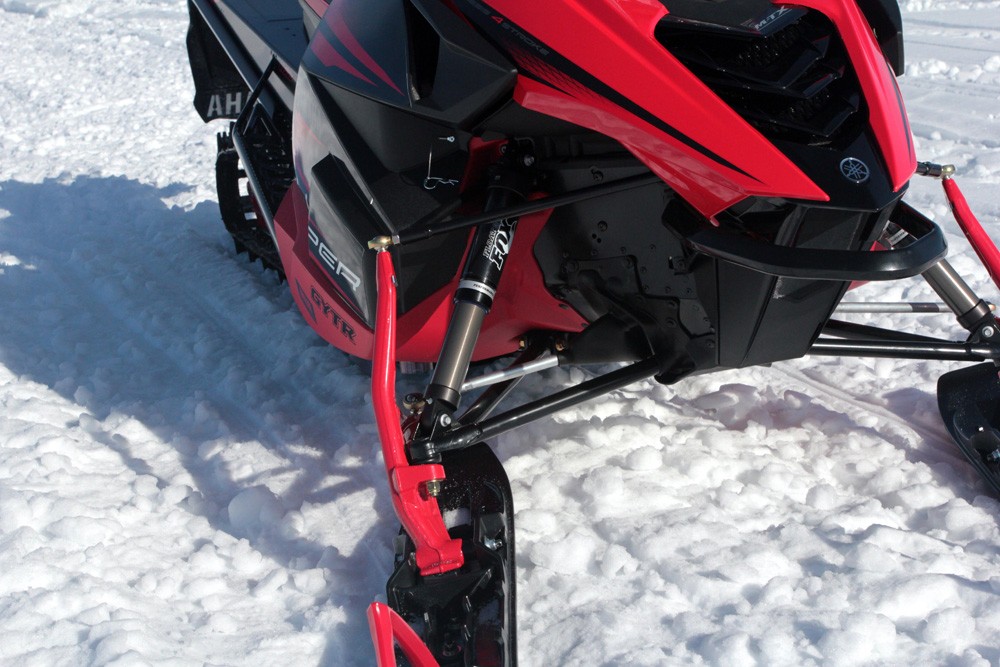 With its tipped in and angled back spindles, narrow ski stance and Fox Float shocks, the Viper M-TX is well equipped for bump hits.

Under the SRV-M front suspension is a new mountain ski. This is new and exclusive from Yamaha and is a ski that does it all for deep powder maneuvering. Yamaha states, “Its wide footprint enhances flotation and actively lifts the sled’s nose up on plane in deep powder. Traction lugs on the top of the ski give you a sure foothold when the situation gets really gnarly. The wide and deep-keel design delivers light steering effort, yet confident and predictable handling on hard pack and in fresh fluff.” The ski, somewhat reminiscent to the mountain ski the Nytro MTX and Apex MTX used way back when, has a wide and deep keel. This keel and overall width keeps the front end afloat. 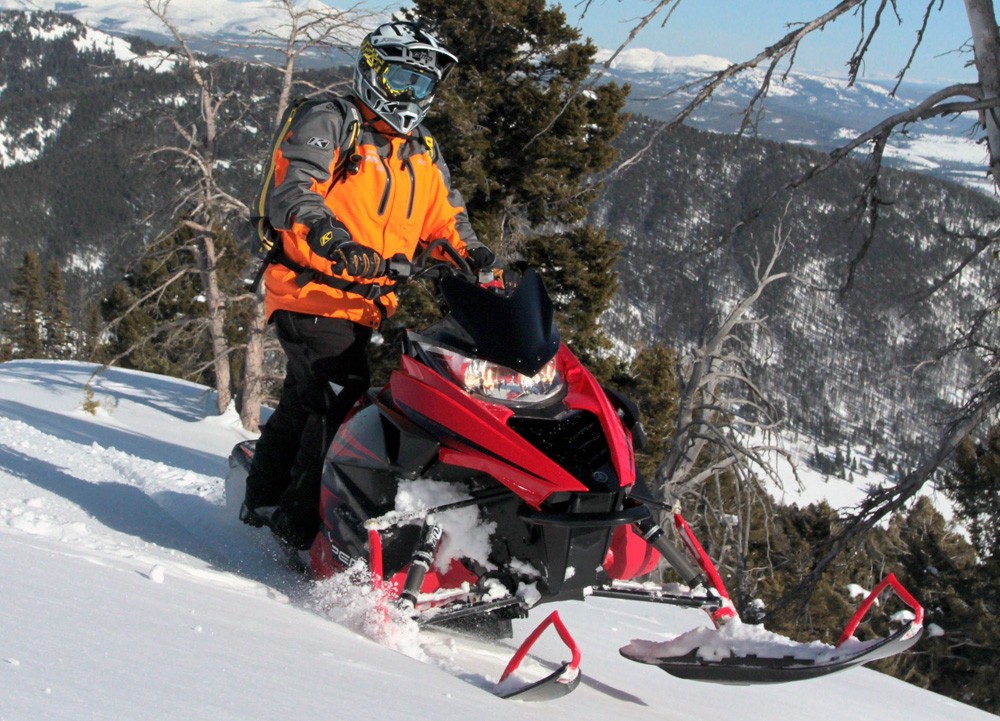 With is new wide and deep-keel ski, Yamaha has given to mountain riders a ski that may be the industry’s best, from an OEM. Without this ski, the M-TX would not be as lively.

As we wrote in our reviews on Arctic Cat’s Mountain Cat and M8000, Cat should trade out some goodies with Yamaha to acquire this ski for its “M” line; after all, Yamaha benefits from using Cat’s ProClimb chassis.

Front shocks for the M-TX 153 and 162 SE are the highly capable Fox FLOAT 3 shocks. Not to end the shock talk here, the rear suspension, the Dual Shock SR 153 and 162 Rear Suspension, relies on a Fox FLOAT on the front rails to take the hits on the chin, and an Aluminum HPG shock for the rear rails. The Dual Shock SR rear suspension is a torsion springless rear skid and handles the long chassis very, very well.

The rear suspension is uncoupled, which allows it to float across powder. Rear suspension rails keep the nose down when ascending hills when horsepower is tossed down to the track. 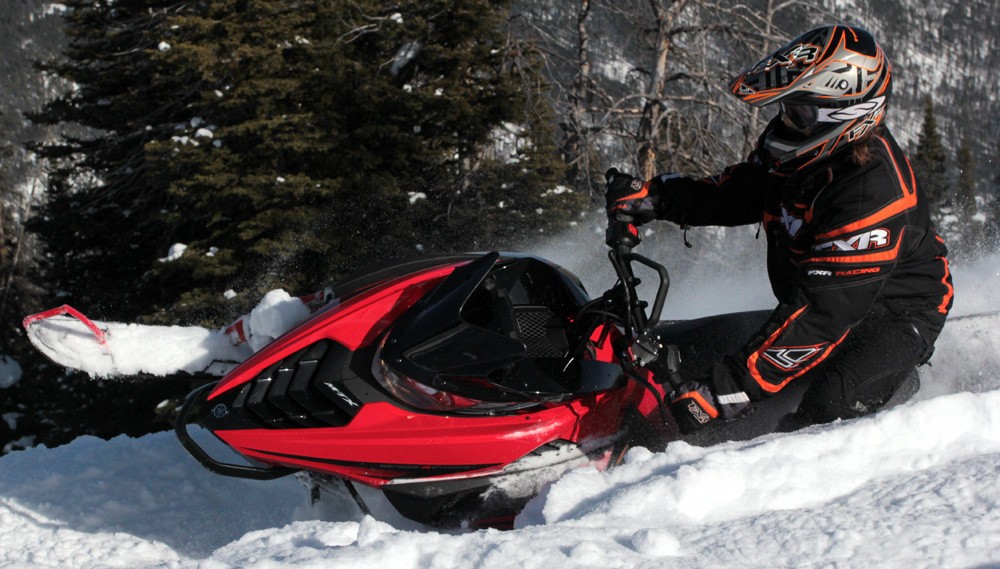 With minimal effort in deep powder, the Viper M-TX, be it a 153 or this 162, feels light through the bars. However, as the day moves on, its weight becomes noticeable.

Our rider impressions for the Yamaha Viper M-TX SE 153 and 162 are favorable. The motor in stock form easily rotates the 3.0-inch PowerClaw mountain track. We admit, we want more power – we like two-stroke snap like a calf roper likes the snap from his quarter horse when running down a calf to rope and heel it. But, for what it is, a 1049cc three-cylinder four-stroke in the 135-horespower class (equal to a 600cc two-stroke), the M-TX SE 153 and 162 are lively.

Yes, we criticize Yamaha for the M-TX’s weight and for sticking with four-stroke oomph for the mountains, but, being it is what it is, the two M-TX SE mountaineers are fun in their own way. When taking the M-TX SE into the trees from some boondocking, the M-TX will do just fine, but the rider will feel the chassis’ weight and if you’ll be there with the two-stroke crowd you’ll have to earn it.

For creature comforts, the M-TX SE has a vertical steering post that keeps a rider square at the shoulders when standing and attacking a mountain’s hillside. The seat is low enough to allow hop-overs, but we would like it to be three inches shorter. Speaking of the seat, Yamaha has an optional seat warmer. There was a time on the “LE” this was standard, but for the SE, it’s an option. Trust us when you have one, you always want one.

The M-TX SE has a righteous cockpit with a vertical steering post, right-sized handlebars, mountain strap and right-sized runningboards – all to help a rider be aggressive. Instrument pod is lively and gives good motor and trip geek speak. 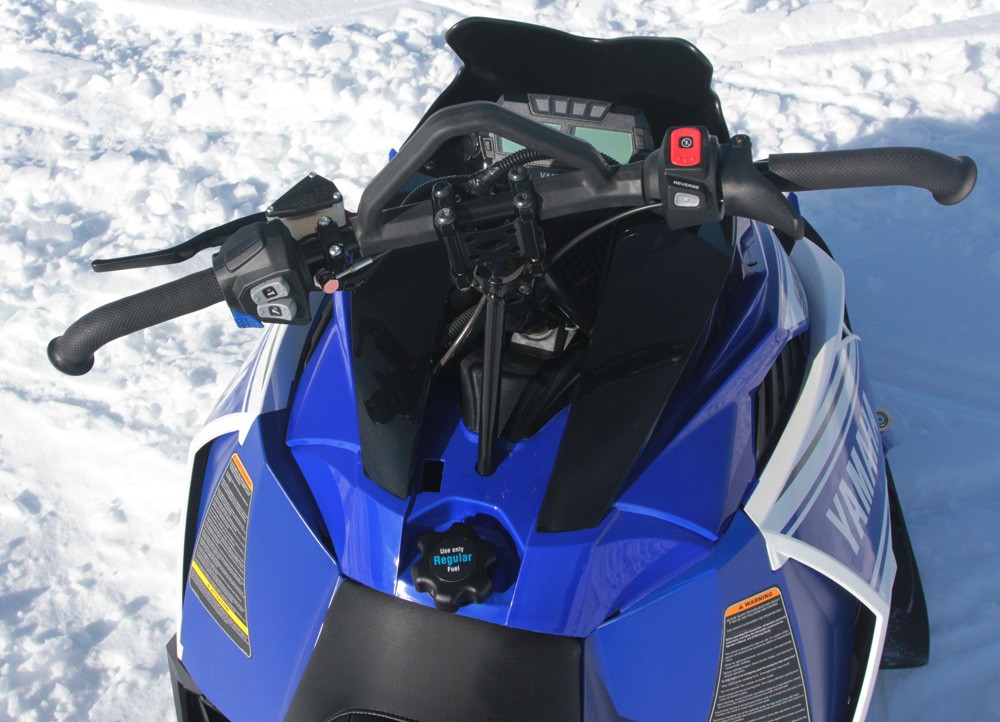 A smart cockpit with simple controls, a low mountain strap and a big instrument display, are essential mountain gear. Yamaha does well here.

If your tastes are to ride the Rockies on a four-stroke, the M-TX SE will deliver days of fun and economical riding. The motor is capable of working hard and being fuel stingy. The 153 and 162 M-TX SE are appealing snowmobiles; give these some time and attention in your research.

Lastly, fit and finish on the Yamaha Viper M-TX SE is superb; these two M-TX SE models are lovely. The motor is reliable, dependable and just plain old fashioned tough. The company builds good toys. But, we desire success – we want a healthy snowmobile industry and for Yamaha to have its chance at kicking snow into the other OEMs’ face; we like competition. Until a change agent comes along, Yamaha will continue to find itself outclassed in the mountain segment, until weight is substantially dropped, horsepower raised (without boost), or two-stroke power gives that sweet braap braap sound from an exhaust dump. Let’s be very clear here, we only speak here of the mountain class.