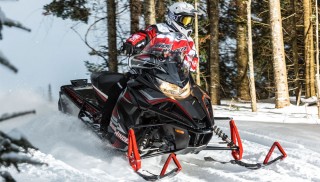 Big power sells sleds? We’ll see if that is true as Yamaha’s all-new Sidewinder series of 2017 snowmobiles powered by a unique turbocharged three-cylinder four-stroke generates as much in sales as it has in word of mouth rumors and facts. Based on initial interest and excitement, the Sidewinder has to be the most powerful news in snowmobiling – ever!

Officially Yamaha and engine-share partner Arctic Cat are claiming 180 horsepower. That may be tame if an independent dyno run this past February in upstate New York is accurate. The claim is for a pre-production Sidewinder engine with more than 800 miles on it. The result claimed was a best reading of just over 204 horsepower at 8850 revs. Will that be the production number? Probably not, but we suspect that 180 will prove a bit understated as production Sidewinders find their way to various dyno shops in preparation for the obligatory aftermarket hop up kits.

We believe the reported results as this writer partnered with that dyno test shop when they both conceived and ran the snowmobile shoot-outs in Old Forge starting in the 1980s. He would dyno the test sleds and this writer’s publication would conduct quarter-mile test runs and publish the results. The dyno shop is credible and we have no reason to doubt the results. 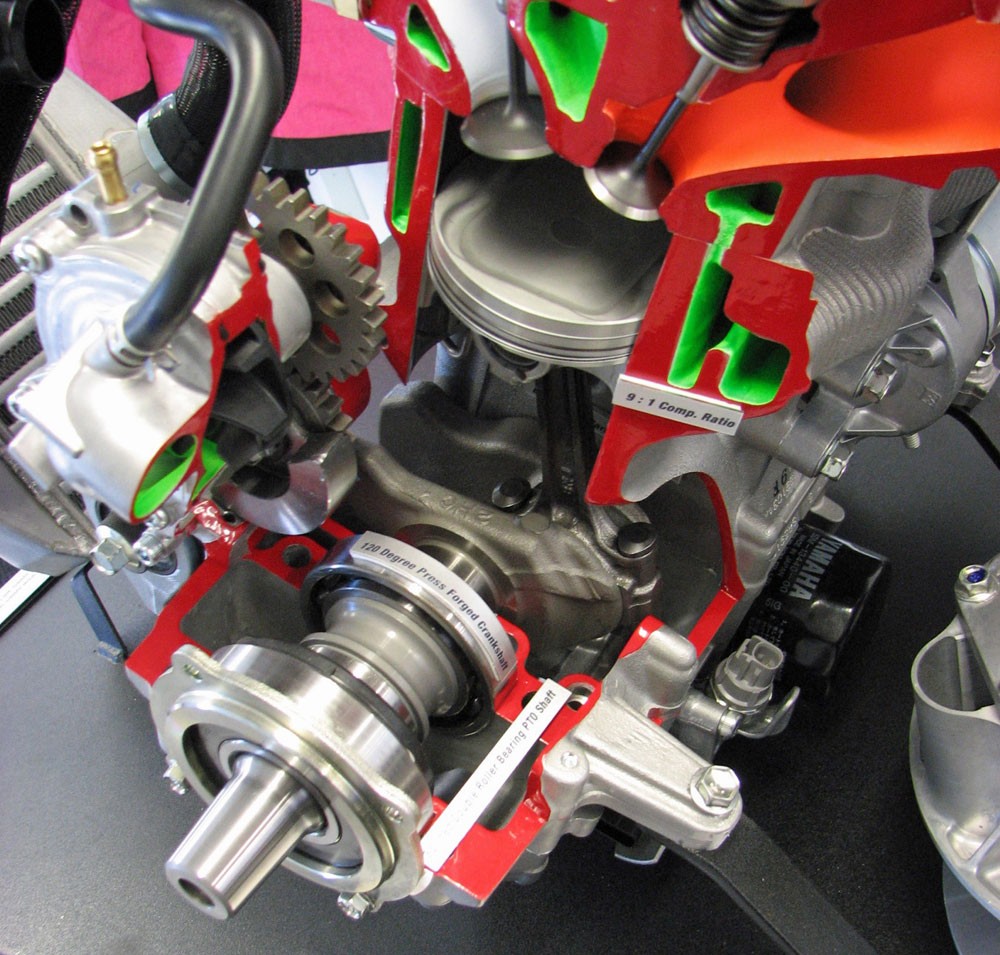 The 998cc turbocharged triple uses a counter-balancer for smoothness, plus unique piston domes and a press forged crank shaft.

Verified performance by an independent third party lets Yamaha off the hook for horsepower claims. Verified seat of the pants and eyewitness speedometer readings by various publications and others all indicate the performance on snow backs up those horsepower claims. Triple digit performance in less than a quarter mile will be the norm come the winter of 2016-2017. Count on it.

Where does this performance come from? According to Yamaha’s Wisconsin-based research and development center engineering manager, Jim Vizanko, the new 998cc triple pre-dated the Yamaha/Arctic Cat hook-up of supplying engines for chassis. When the first Vipers appeared, the turbo project was well underway. A clue to Yamaha’s turbo infatuation could have been suspected with the special MPI kits offered first for Yamaha mountain sleds and then for some of its trail models. Those kits were fitted to the 1049cc four-stroke triple that powered the new Vipers.

But, because of the volume Yamaha and Arctic Cat expected to generate, the turbo package needed to come from a larger supplier that could meet the two sled brands’ demands. That meant Yamaha looked to IHI, a Japanese company with facilities in the United States and a history of engineering and providing turbo units for major automobile brands.

Yamaha desired car-like smoothness from its new turbo engine, which means virtually no turbo lag. Hit the throttle and get immediate go-power. Yamaha had turbo experience with its 1982 Seca XJ 650 Turbo motorcycle, but it suffered from serious turbo lag. Having ridden a Seca Turbo back in the day on California’s 405 freeway, we can tell you that turbo lag can be a big deal. The engine had gobs of power, once the turbo built up boost, but to get on a freeway ramp, twist the grip and wait for the power to kick could be nerve-racking as you needed to blend into freeway-speed traffic. We did it. And we still remember our Seca Turbo riding experience – for mostly the wrong reasons. It was a stylish bike but it had a very short sales life.

Comparing that 1982 Seca Turbo to the new 2017 Sidewinder isn’t fair as the new Yamaha turbo 998cc engine is silky smooth, immediately delivering power almost as soon as you twist the key starter. That smooth power delivery was a “must” as Vizanko explained that Yamaha went with three individual throttle bodies, which is unique to Yamaha. Because the turbo isn’t always on boost mode, the three throttle body set up allows the engine to retain a normally aspirated aspect, especially at partial throttle. He explained that was why riders commented on the smoothness of power delivery as it goes from modest trail speed to boost acceleration.

Yamaha went with three individual throttle bodies because the turbo isn’t always on boost mode and the three throttle body set up allows the engine to retain the smoothness of a normally aspirated motor at partial throttle.

Anyone who remembers Polaris’ 750cc four-stroke turbo or has ridden Arctic Cat’s Suzuki turbo will recall a whistling noise whenever you quickly backed off the throttle and dumped boost pressure, usually via a poppet valve. Yamaha internalizes the boost dump of its waste gate via an air bypass valve that relies on air pressure sensors at the throttle bodies, thus controlling the boost dump.

You’ll note upon inspection of the Sidewinder, that the side panels have been expanded to allow fitting of this side-mounted IHI RHF5 turbo unit. Compact though it is, the system needed space and special considerations which Yamaha made with its design of a special cast steel 3-into-1 exhaust manifold constructed to match the turbo mounting layout allowing a short path for exhaust gases to spin the turbine.

IHI turbochargers feature a nickel-alloy turbine body that can withstand high temperatures. The design incorporates ceramic ball bearings and a strong but lightweight Inconel turbine blade. The turbo unit is similar in concept to IHI systems used on small displacement automobiles, but sized and spec’d to provide consistently smooth performance on the Sidewinder’s optimum operating speed of 8750 rpm. Maximum boost pressure in the system is limited to a conservative 12 PSI. Compare that to the 18 PSI boost used on a Fiat 500 Abarth or the 16 PSI of a Chevrolet Cruze with the 1.4L turbo. 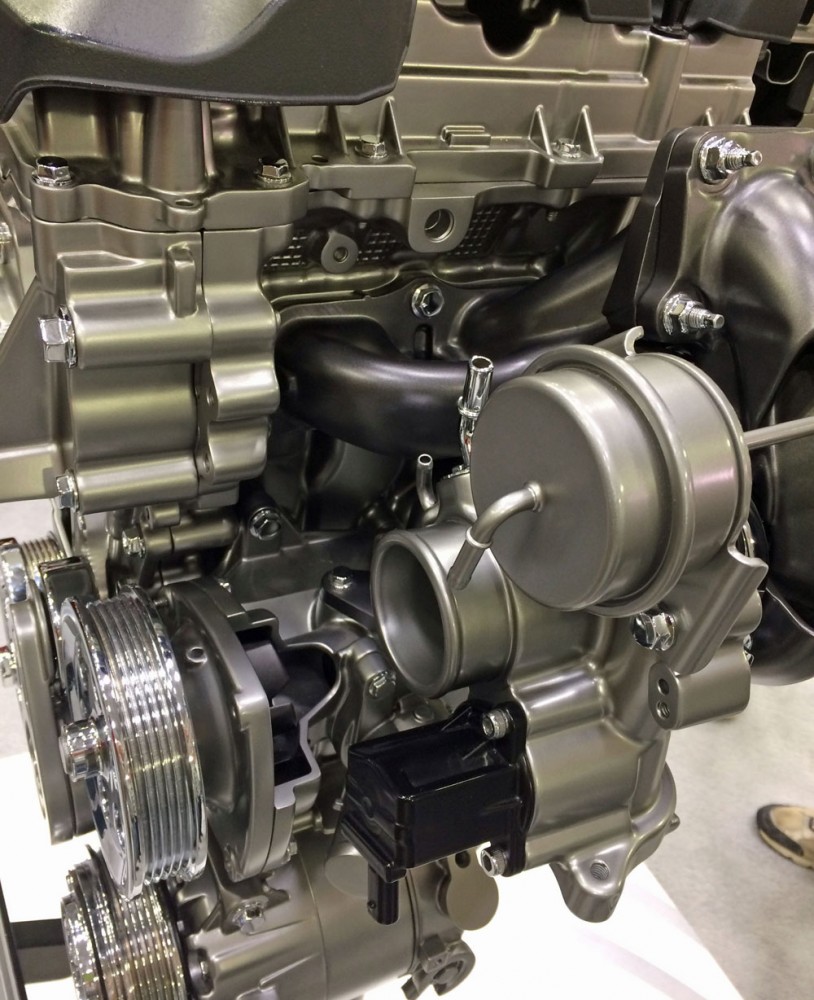 Yamaha’s use of three throttle bodies is unique when you look at General Motors’ Buick division’s new 2.0-liter turbo motor that uses a single throttle body to feed its four cylinders.

The ECU features sensors for: track speed at the driven shaft; air pressure at altitude; engine rpm; pre-ignition; coolant temperature; throttle positioning at the throttle bodies; intake air pressure; manifold pressure at the intake plenum; and boost pressure at the turbo compressor. Although the Genesis turbo was designed to run on premium 91 octane fuel, the system can run on 87octane but may result in engine detonation, in which case the ECU retards ignition plus increases injected fuel volume while adjusting boost pressures to prevent engine damage. Bottom line: run premium!

This “smart” system maintains turbo-generated air pressure at two main points; the Compressor boost, which is controlled through the waste gate solenoid valve; and, manifold pressure that is controlled by the Air Bypass Valve (ABV). The ABV is actuated by a solenoid based on manifold pressure and helps to reduce surge on deceleration and improve response time when re-accelerating. 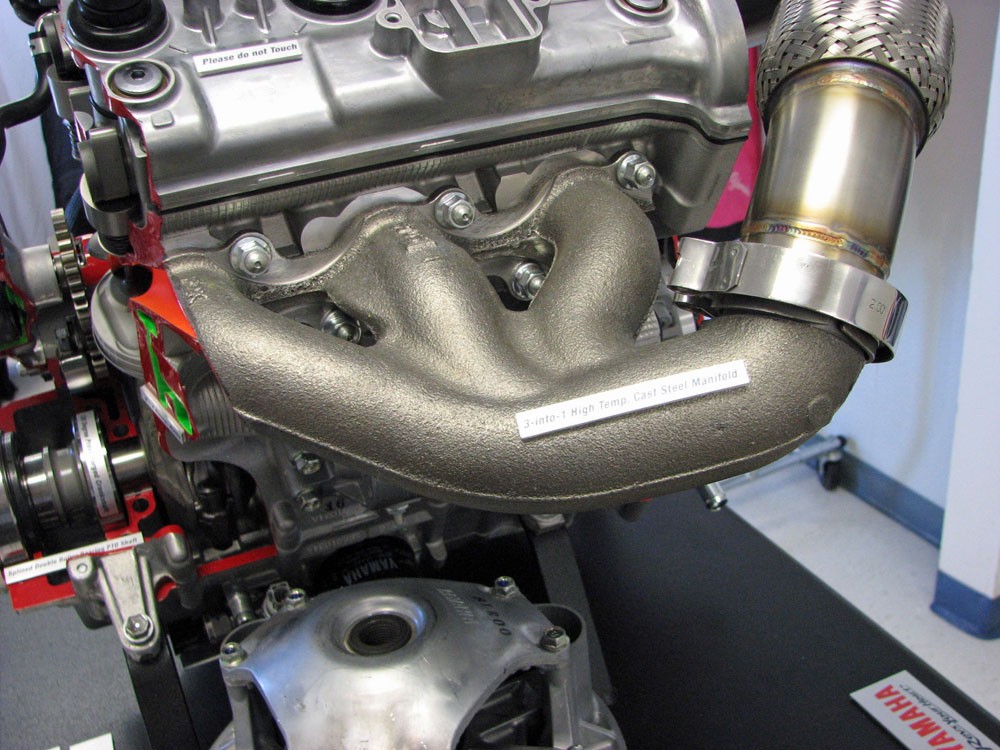 Yamaha created this special cast steel 3-into-1 manifold to match the turbo mounting layout and to permit a short path for exhaust gases to spin the turbine.

All other functions are controlled based on various electronic calculations affecting spark ignition timing and fuel injection. The ECU is programmed to respond to every possible operating condition as reported by the sensors and then signals the various systems with the correct specifications. This map is critical to the performance of the engine.

So then, since no Yamaha engines are created in a vacuum, how and where does the 988cc turbo fit? According to the blog “Yamaha Talk,” which is written by a Yamaha North America insider, the turbo engine came about as a “…concept to build an engine platform that could be customized for a given application. The crank shaft is common to all (versions), but there are many individual parts that are unique to each.

“I guess you could say that we were developing the turbo concept over a longer period of time and the short block followed along. Both the YXZ (Side-by-Side) and Sidewinder engine early proto-typing started with a Nytro-based engine (as did the Viper) and all the requirements for both applications came together in the final layout of the 998.” 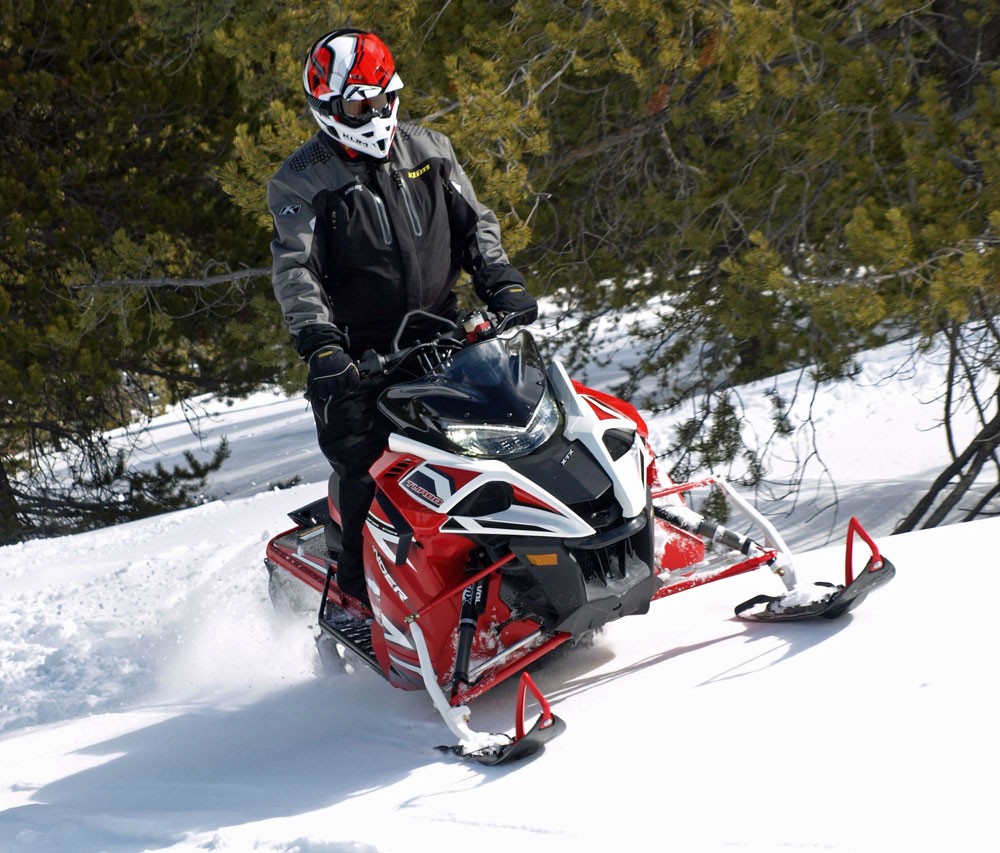 Although the big horsepower numbers may drive sales, the Sidewinder’s on-trail smoothness and excellent handling will make a positive impression with riders.

For the record a Yamaha spokesman notes that Yamaha commenced the 998 Turbo project after it had been pitched in planning multiple times over the years, and way before the Arctic Cat joint venture was even a handshake. Yamaha in Japan finally began official development more than three years ago. Once Arctic Cat was brought in on the project, the two parties were able to work more closely together than on the previous Viper project. The Sidewinder is the result of both engineering groups working side by side.

Yamaha emphasizes that the only thing different between Arctic Cat’s 998cc turbo motors and Yamaha’s turbo is found in the clutching. The ECU programs are said to be consistent model for model. But what will matter for both Yamaha and Arctic Cat is the big number in horsepower. Will it translate to big sales numbers?