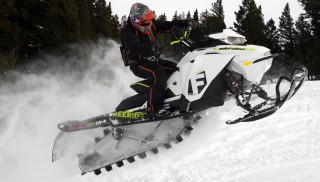 Ski-Doo understands the power behind “seize the moment.” The company’s Gen-4 REV chassis with 850 two-stroke power is seizing the moment, and at the same time creating the moment. That power finds its way into the 2018 Ski-Doo Freeride.

When introduced for model year 2017, the Gen-4 Summit X and SP captured the flag on many mountain tops. There were and are some who were and are skeptical of the Gen-4’s success, citing blown belts from underhood heat or heat exchangers easily punctured by fast moving rocks jettisoned by the track. There are always skeptics. And yes, they have their place.

But, for us, we’ve learned the Gen-4 Summit is a tough mountain masher that is simple to ride and simple to manage. It is as perfect as a snowmobile can be. It may be for 2018 that the greatest rival for the Ski-Doo Summit X and SP may come from within, the Gen-4 850-powered Freeride.

The Freeride for 2018 is not like the 2017 Freeride, it is all Summit X – skinny, narrow, nimble and agile – and more. To understand Ski-Doo’s Gen-4 Summit line is to know there are three Summit configurations, SP, X and Freeride. But, Ski-Doo breaks out the Freeride as its own breed – model – rather than place it under the Gen-4 Summit marketing banner. Now why is that? Ski-Doo believes the Freeride hits a different rider segment, the backcountry freestylist who is more edgy than the Summit rider.  We disagree. The Summit X and Freeride rider (long track Freerides only) are the same, but we see Ski-Doo’s point and give the company credence to declare this as it conducts its own demographics and psychographics marketing research. 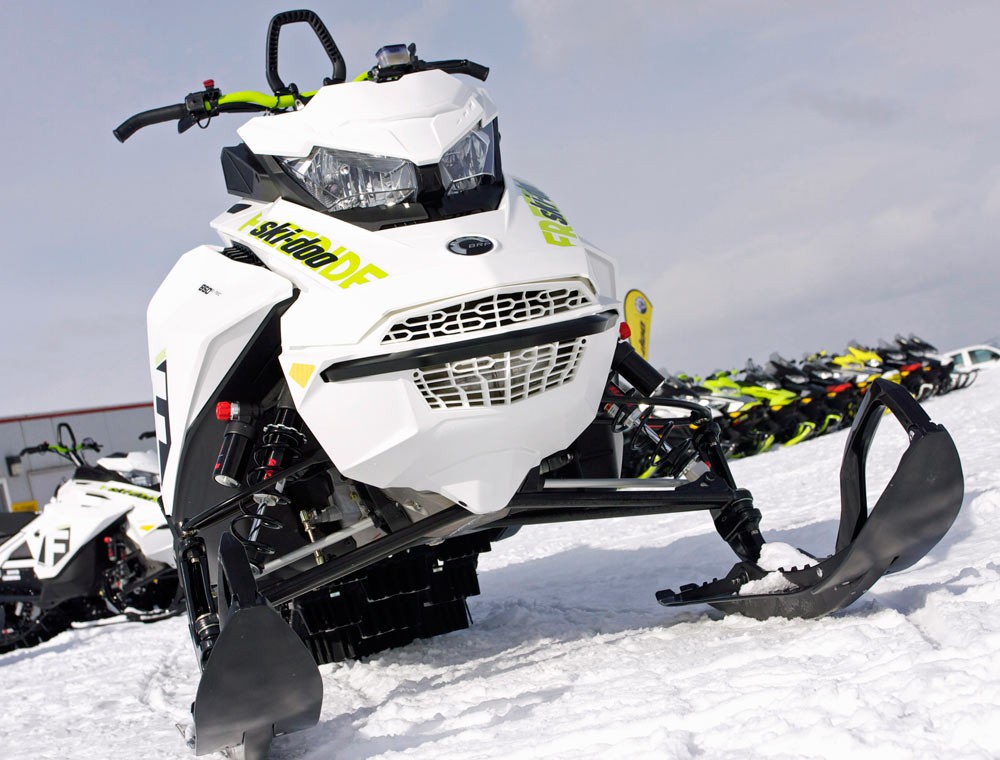 With its menacing and skinny stance, the next generation Freeride proves Ski-Doo believes in its Gen-4 chassis with 850 power. The Freeride’s biggest competitor is its sibling, the Summit X.

If you’ve not ordered your Freeride by time this article goes live, then you may have missed your opportunity as it is a Spring-buy model only.

The 2018 Ski-Doo Freeride has many track lengths and suspension configurations. Summarizing these in order from shortest to longest:

New 146, 154, 154 S-38 and 165 Freeride owners can order their vehicles in either sea-level or high-altitude calibrations. All Freerides are powered by Ski-Doo’s 850 two-stroke and rely on Ski-Doo’s new pDrive drive clutch. These too have the same runningboards as the Summit X, as well as seat and handlebars. All Summit accessories work on the Freeride. Spring-buy customers can choose SHOT for their Freeride, which we highly encourage.

Now that we’ve given a general understanding to the many 2018 Ski-Doo Freeride models, we will focus in the 154 and 165 with narrow ski-stance, as these are the models we rode in British Columbia and on the mountains near West Yellowstone, Mont. The 146 Freeride we did not drive, but we spent time on the 2018 146 Summit X and yee-haw, it is a triple fun mountain banger in a super nimble way.

The 154 and 165 Freerides come equipped with Ski-Doo’s RAS 3 front end with KYB Pro 36 R Easy-Adjust shock at each point. At the rear, the tMotion rear suspension has two KYB Pro 40 Easy-Adjust shocks, these being the center and rear. All these shocks are the standard shocks bolted to the MXZx 600RS race sled. 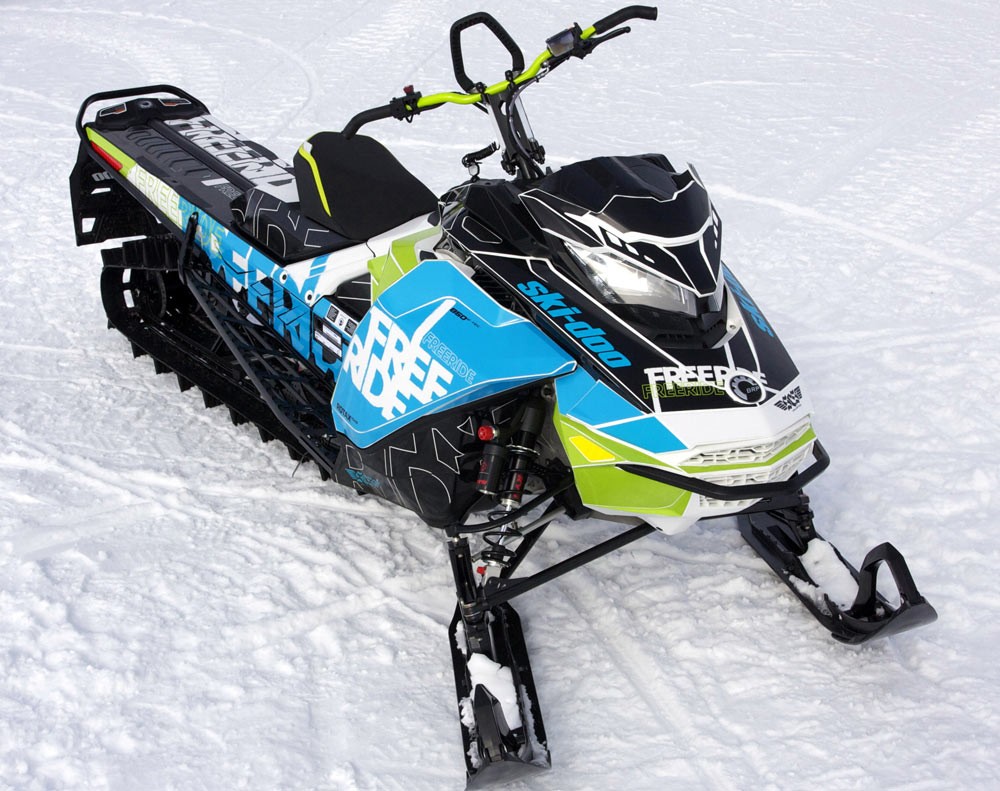 Available wraps come your way for Spring-buy purchasers. This 154 Gen-4 Freeride is a statement maker, Note the high end KYB shocks on the RAS 3 front end.

Another way the Freeride 146, 154 and 165 is different than the Summit X, besides the shocks, is that the runningboards have front and rear reinforcements, and too the slide rails are reinforced – to handle impact energy from long drops. These add minimal weight to the overall package. 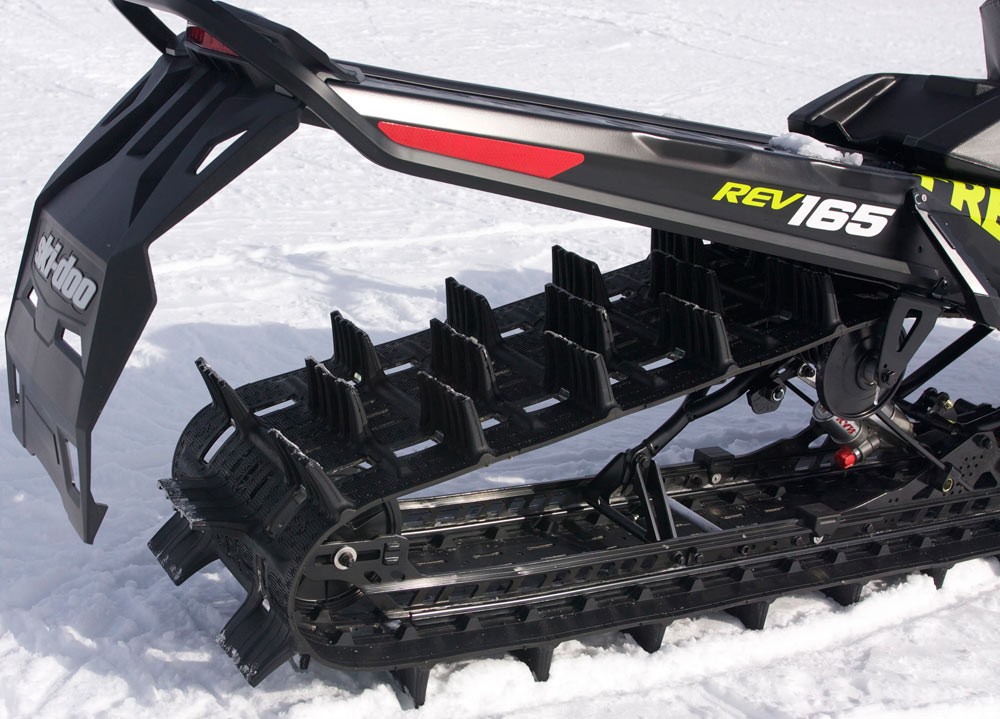 With rail and runningboard reinforcements, the Freeride 154 and 165 are meant to absorb much impact energy.

Regarding the shocks, why is this important? When we first rode the Freeride 154 and 165 in British Columbia mid-January 2018, the first Freeride we hammered on was set stiff, its KYB Pro 40 Easy-Adjust shocks set firm to keep the chassis from over transferring on steep ascents.  With the stiff setting, the Freeride held its nose to the mountain’s steep nape when climbing, but when trail burning and mogul smacking, this Freeride, a 165, was sprung too rigid for our liking, that is for our weight.

The next Freeride we rode the KYB Pro 40 tMotion shocks were set at a low- to medium-setting, with the RAS 3 shocks also set at a somewhat soft setting (compression and rebound is responsive not only to mogul height, snow density and vehicle speed, but to the driver’s weight), which made this Freeride, the 154, cushy and super easy on the knees when pounding the rollers. 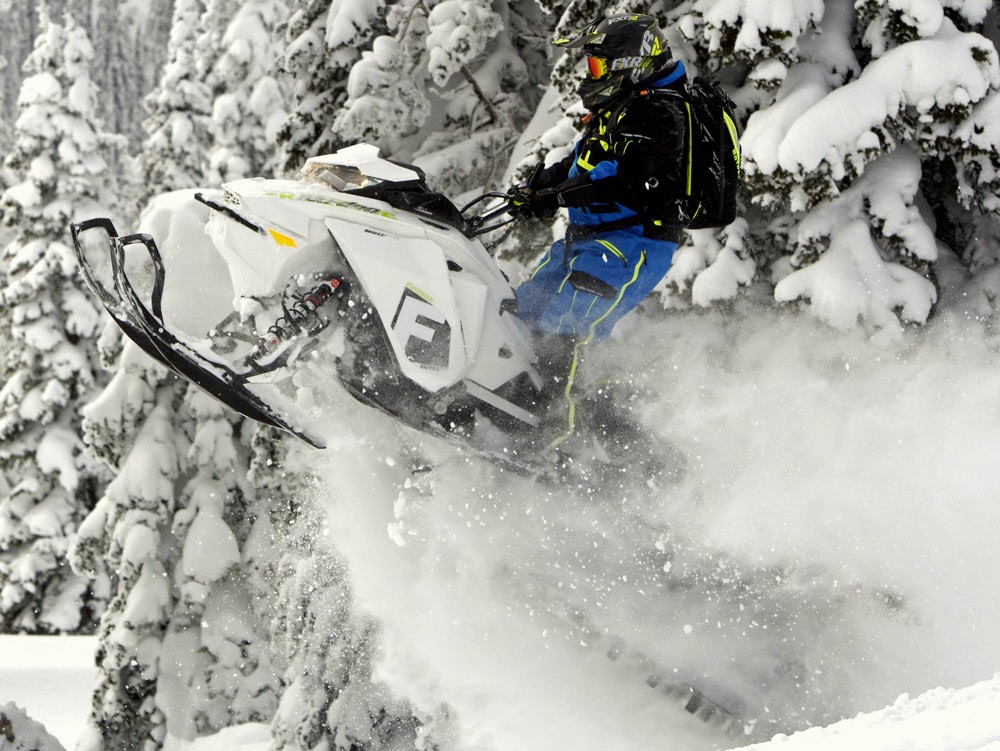 Our point here is the Freeride has deep capabilities with its shock package. This is not to minimize the capabilities the Summit SP and X have, but to report the Freeride 154 and 165 can be set as a long track snocrosser and ditch banger, as well as a deep powder fuel- and oil-injected mountain goat traversing the snowy Rocky Mountains in the U.S. and Canada. The Freeride’s shock package gives versatility – choices.

The Freeride 154 and 165 we rode in British Columbia, and for four days on the mountains near West Yellowstone, earned our trust as slippery, nimble long tracked snowmobiles. With its very-capable 16-inch wide Powder Max Light track with either 2.5-inch or 3.0-inch lugs, and ski stance set at 37 inches (its widest), the Freeride 154 and 165 are agile powder hustlers. 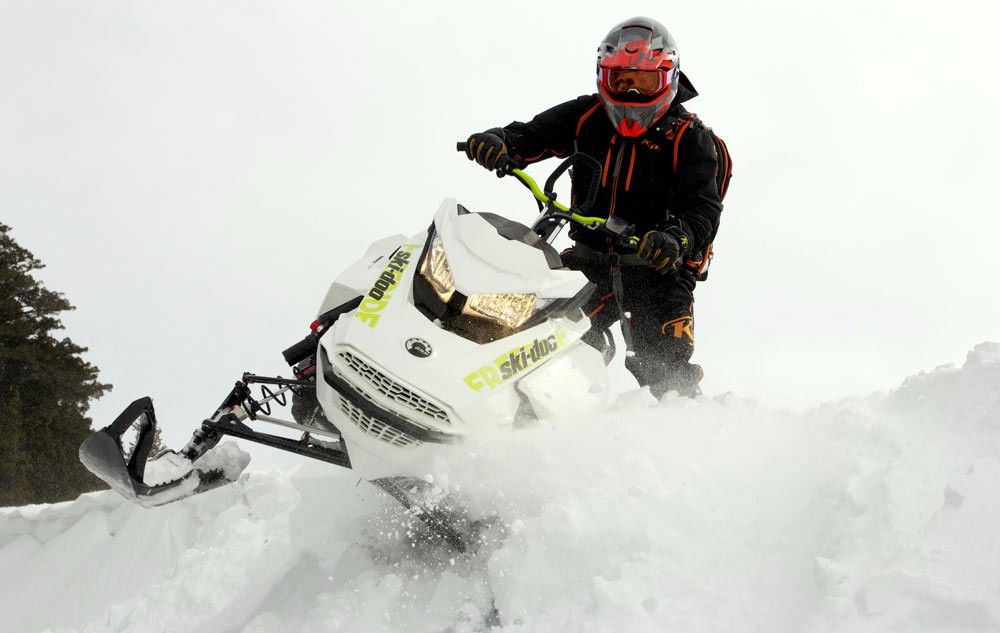 With its narrow chassis, smooth lines, well-machined runningboards, the Freeride for 2018, being all Gen-4, is a Summit X on steroids and a high-energy soda.

When breaking new lines up over a mountain top, the 2018 Ski-Doo Freeride uses the 850’s power and efficient torque transfer through the pDrive drive clutch and QRS driven clutch to humble the mountain and to strengthen the driver. Believe us when we say the Freeride made us better drivers. Additionally, this, the latest-generation Pyramidal chassis, keeps a driver fresh by being a light handling chassis – the best Ski-Doo has ever developed.

One may think, a freestyle snowmobile may be more than what you and I need, and may be wieldy to handle; for this new 2018 Freeride 154/165, this is far from the case. Be not troubled, the Freeride is playful, easy on the hands and carving son-of-a-gun. The chassis will settle down when climbing; by driving this snowmobile with the brake as much as the throttle, the Freeride will deliver almost acrobatic-like maneuvers. 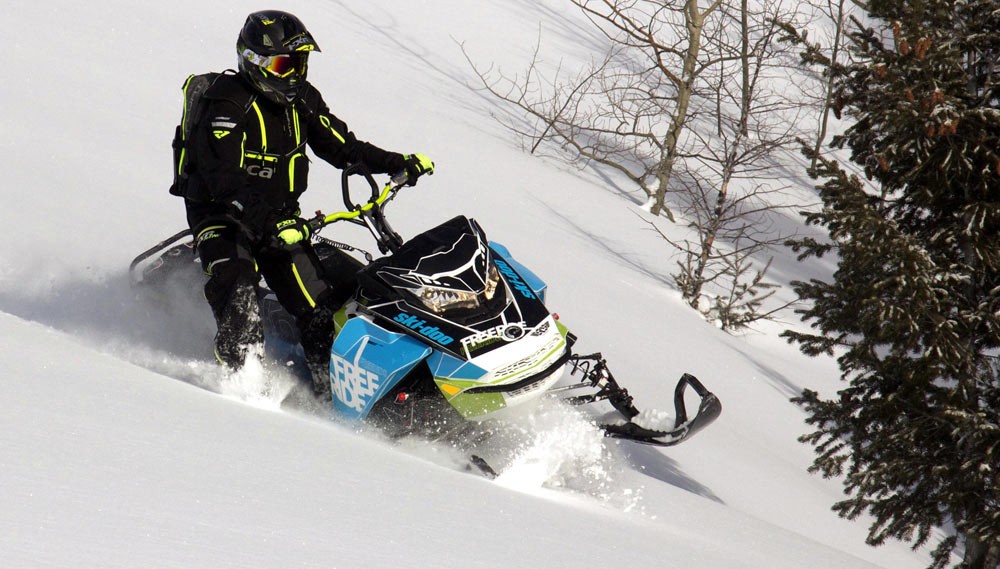 In solitary beauty, the 2018 Freeride, be it a 165 or 154 is simple, easy and forgiving. Freeriding in the backcountry is as sweet as pure maple syrup.

The question lies here: why would a mountain rider, a REV Gen-4-seeker, want a Freeride 154 or 165 over that of a Summit SP or Summit X of same track length? First, the SP and X will powder snorkel and climb alongside the Freeride, all things equal. But, the Freeride gives the hardcore and edgy freestylist permission to take longer drops, harder hits across big dead fall trees, tall hops over large snow-covered boulders, and the equipment to compete in professional hillclimb circuits like the Rocky Mountain Snowmobile Hillclimb Association (RMSHA).

Lastly, we feel the 2018 Ski-Doo Freeride will help deep-powder players seize the moment. We are as excited about the Gen-4 850 Freeride for 2018 as we were the initial release of the Gen-4 Summit X in 2017. The Freeride’s shock package and reinforcements make it tank tough, while being light as a feather through the handlebars and Summit X nimble.