Arctic Cat’s performance legacy dates back to the summer of 1970 when the company added a racing-oriented EXT to a line that included the Panther, Puma and a value-priced Lynx. The 1971 EXT came about as Arctic Cat embraced Kawasaki power, adding it as standard equipment on many models. Flash forward nearly four decades and you’ll find the EXT namesake continues as a potent 2010 model.

No longer relying on Kawasaki for power, this 2010 version of the EXT brings the most 4-stroke power ever dropped into a production snowmobile chassis in the form of a twin-cylinder, one-liter, turbocharged engine that delivers 177 horsepower and 121 ft.-lbs. of torque. Measuring 1,056cc in overall displacement from a bore and stroke of 98mm x 70mm, the Suzuki-built, Arctic Cat-specified motor uses ramped up Arctic Cat engineered clutching, consisting of an Arctic rpm sensing driver mated to a roller cam driven. Power feels seamless as your throttle thumb engages the intercooled engine’s electronically fuel injected intake. There is virtually no turbo lag. And, as we discovered at nearly 11,000 feet of elevation in the mountains around Grand Lake, Colo., the turbo charger gobbles ambient air and packs it with fuel to leave essentially no power drop. 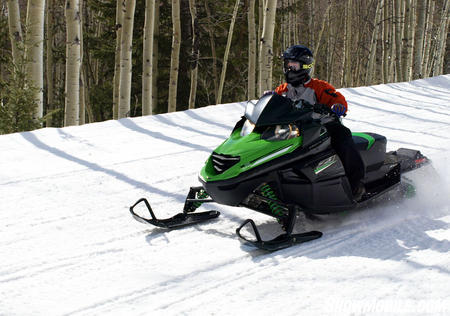 Based on our experience with the short track turbocharged Z1 Turbo and TZ1 Turbo Touring with the elongated track, the Suzuki’s power appreciates the bigger paw print of the 144-inch track. It bites instead of slips. The added bonus is that the longer track and suspension eats up mini-moguls for a smoother ride. That’s exactly what we liked about the 2010 Z1 Turbo EXT — a smooth ride with incredibly smooth power. 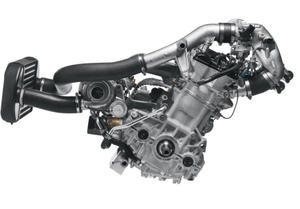 If you want to ride a sled that is uniquely yours, check out the EXT. We suspect that Arctic Cat engineers kept this model in their hip pocket, waiting to see the reaction to the new turbo models. These guys ride what they develop. So, you know, they had to know that a sled with this much power and torque would like putting its ample power to a longer track. Anyone who rode the two turbo models would have known that as well. In some circumstances the touring version with its 144-inch track was actually a better overall performer than the 128-inch equipped Z1 Turbo. We will admit to preferring the longer track’s functionality, even if we didn’t adore what the two-up, too mature for us touring guise said about us. After all, we still see ourselves liking to mix our gray with some flashy Arctic Cat performance green. The touring version is nice and all that, but it’s for older guys isn’t it?

There is no doubt that the 2010 EXT is for the performance-oriented rider, graying or not. This sled anchors Arctic Cat’s claim to having the “world’s fastest” sleds. It does it with style and Cat green flash. As such, you figure right away that the EXT is no entry-level model, but it does have some unique values attached to it. You expect a premium sled to come with premium features and this one does. The EXT’s 144-inch track stretches out when compared to a standard Z1 with 128-inch track length.

You can adjust the handlebars to suit any preference.

We’ve discussed the 15-inch wide by 144-inch long, lightweight Cobra track. It adds bite with the benefit of 1.25-inch tall lugs and traction setting stance gained from the Arctic engineered slide-action skid frame with coupling blocks that keeps the front planted in both acceleration and deceleration modes. There’s a Fox Zero Pro shock with internal floating piston acting on the suspension’s rear arm and adjustable torsion springs for fine-tuning your ride. This set up provides up to 13.5 inches of travel.

As with other premium Arctic Cats, the 2010 Z1 Turbo EXT is built around the box-aluminum Twin Spar chassis. You’ll find this model incorporates the tipped down front with revised geometry for vastly improved cornering, which were changes added last season. As a premium model, the EXT comes with nearly infinite adjustability for the handlebars. The EXT features a 5-inch riser, which measures two inches taller than the one found on the standard Z1. There’s even an accessory mountain strap available as Arctic Cat engineering anticipates this model being used to break trail in heavy snow areas, such as Michigan’s Upper Peninsula and the heavy snow areas of Quebec and Ontario.

Another premium feature is the combination digital/analog instrumentation. You can set the gauge to read out in digits or watch the sweep of a speedometer arm.  There’s a dual stage trip meter, electric gas gauge, clock and warning lights if the coolant would overheat or oil runs low. Of course, you get the expected thumb and hand warmers.

New features from Arctic Cat include the integrated storage pouch, which replaces last season’s plastic storage box, a new LED tail light said to be brighter for improved on trail visibility, and open pattern floorboards that are both lighter and reduce snow build up. Like the optional mountain strap, the floorboard design is deep snow inspired and further evidence that Arctic Cat engineering views the EXT as an off-trail capable model. If we were betting people, we’d suggest that the Crossfire chassis is living on borrowed time and that the EXT set up will be the future for Cat’s “hybrid” models. 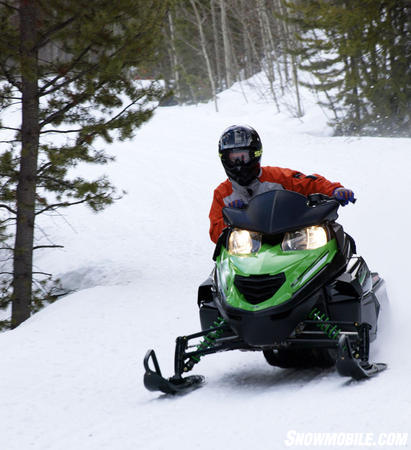 Arctic Cat’s EXT is not going to be for every snowmobiler. If, however, you like turbocharged performance, the smoothness and other advantages of a 4-stroke, Arctic Cat’s aggressively bold Twin Spar styling, and the proven on-trail agility of the latest Arctic Cat models, then you should stop by an Arctic Cat dealership and take a look at this sled.

On or off trail the 2010 Z1 Turbo EXT will more than live up to its EXT legacy and make a mark as it is incredibly powerful, extremely well-mannered on trails, smooth and comfortable to ride, and… did we mention, awesomely quick and breathtakingly fast?