Is one of these the best of all "real" worlds for sledding?

When you measure hype versus reality, some strange-ish things appear. For one, those who scream most about their great ride and handling will get their 15 minutes of bright lights, but those who really know and who really ride mile in and mile out, swat hype. They know reality. Reality is how a sled truly reacts to stutter bumps and hunkers down to absorb suspension soakers. And while hype may scream power, reality is measured at your throttle thumb. Hyping handling can’t escape the reality of how a sled bites into a turn and the reality of how the skis grip and the track follows and the rider reacts instantly and confidently to power away from one corner and sets up for the next. Hype is, well, just hype. Reality sets one sled apart from another. Reality is Arctic Cat’s 2011 F8 series, and, best of all, you have a choice of three — if you ordered early.

If you read our picks for Best Sleds of 2011, then you know that the F8 EXT came out on top in our on/off trail rankings. What we didn’t tell you is just how good the short-tracker models are. Where the EXT is new for 2011, the F8 Sno Pro and LXR are slightly tweaked heading into the new season. The 2011 F8 Sno Pro Limited (AKA, LTD) was an early season inspiration to entice buyers who wanted something a bit different. That model offered a unique Sublime Green coloration, striped seat, color-keyed sport bumper, storage bag, handguards and electric start. So, if you see one on the trails, at least you’ll know what it is, but you probably won’t find one available this late into the selling season. 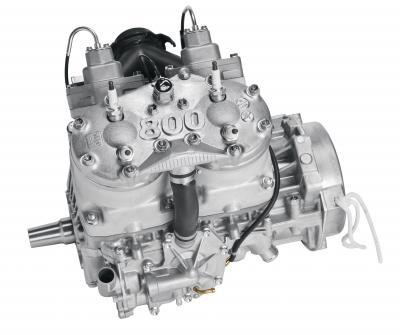 With 160-plus horsepower and a displacement of 974cc, this Arctic/Suzuki two-stroke powers the F8 series.

When we say the F8 EXT may be the best Arctic Cat in the 2011 line as it combines the bests of all things Arctic Cat, we can default to the 128-inch tracked “base” F8s as being among the best straight-up trail sleds of this and the past few seasons. The chassis and underpinnings are essentially are essentially unchanged from the past season. Sitting under the drop-nosed F8 is most recent version collaboration of Arctic Cat’s Suzuki-partnered 794cc two-stroke twin. Register 160 horsepower for starters. Both the LXR luxury and LTD modes offer key start as standard fare. You rope-start the base F8 Sno Pro, but this engine, thanks to Cat’s batteryless electronic fuel injection, fires by the second pull. All three come with the electronic reverse, which adds extreme convenience with virtually no weight gain.

For literal starters, these F8 models benefit from the advances minor and major that have been engineered into what Arctic Cat hypes as its “body-saving ride technology.” Yes, indeed, Cat can “hyper-ventilate,” too. In this case, there is a reality, or so a Wayne State University study concluded when it judged that Arctic Cat’s rider-forward platform delivers 19.3 percent less impact to a rider’s body than a comparable sled from the competition. 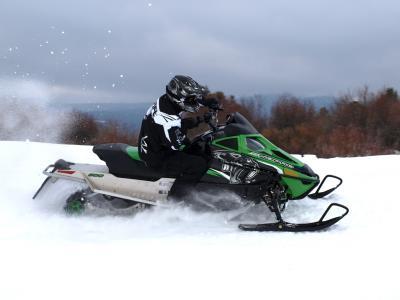 With exceptional power, ride and handling, the 2011 F8 is Cat’s most versatile power performer.

Since the Twin Spar chassis design hit the snow, Arctic Cat engineering has refined it such that virtually any sized rider can fit this one-size fits all platform by adjusting the footrests, setting the handlebar or adjusting the rake and height of the seat. When it comes to the F8, a rider can establish a mode or mood of riding for one day and totally change it up the next day. You can set the sled for an easy cruise or hunker into it to thrash through the backwoods. 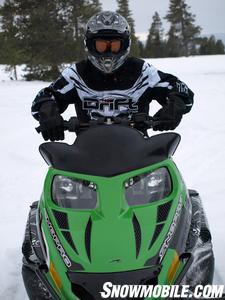 Twin beams sit high to brighten the trail.
The reality of Arctic Cat engineers is that they take their snowmobiling very seriously. Long-term engineering legend and engineering vice-president Roger Skime overseers sled development from the saddle of the latest snowmobile prototypes — usually at full throttle! That’s the direction Arctic Cat engineers take and it’s apparent in how the sleds like the F8 react on the trail. Thief River Falls, which sits in northwestern Minnesota, is flat and prone to seriously cold weather. When you sit on the F8 LXR you’ll sit behind a midheight, racy windscreen (optional for the Sno Pro versions). It’s a windscreen that could qualify as a touring shield on some competitive sleds, but it blends in with the overall sporty look of this drop-nosed Cat. And it displaces wind and weather without impeding performance, just like Roger Skime would demand!

We find that too many riders underestimate the value of night riding. The reality of this sled includes bright, night lighting from two highly prominent headlights. All the better to read the trail at night speeds.

And the F8 handles beyond the hype favored by some competitors. Up front are coil over Fox Zero Pro shocks (LXR) or Fox Float 2 (Sno Pro) to control Cat’s seventh generation double wishbone, which Arctic Cat engineers pioneered when everyone else favored trailing arms or telescopic struts. Now everyone else has some form of A-arm front suspension. The F8 offers up to 9.5-inches of trail absorbing travel. The stance from center to center of the plastic skis is 43-inches. Here again is a positive of Arctic Cat engineering refinements. In the early iterations of the “F” series Cats, riders complained that the new chassis didn’t grip the corners that well. A few tweaks here and there cured that to the point that the most current F-models, including the 2011 F8s are among the very best trail handlers. 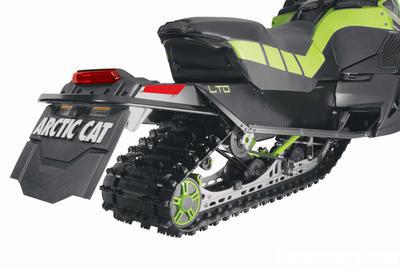 The rear suspension draws from the slide-action style favored by Cat, but fitted to allow maximum traction from a 128-inch circumference track. The suspension can react through the coupling blocks and slip fore and aft via the slide-action to plant the track for acceleration or grip when decelerating. The rider gains the control with this setup. Also, the rider enjoys one of the best rides in the sport. When we compared this setup to a much more hyped long travel rear suspension, we found the F8s could be ridden faster, longer and harder over all types of rough trail conditions with incredibly sure control. Maybe Arctic Cat should hype this aspect, as it is very much a reality! 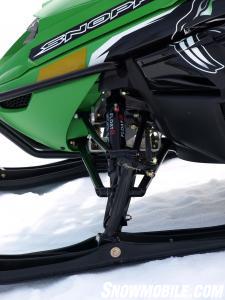 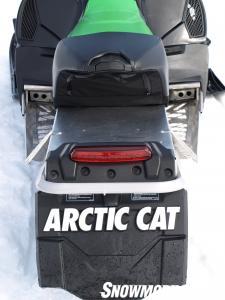 The F8s feature a high-visibility rear taillight for 2011.

The slide-action parallel rail skid provides upwards of 13.5 inches of travel and can be adjusted via a combination of torsion spring adjustments and Fox shocks. As for the torsion spring setup, Arctic Cat engineers have been fine-tuning that device since the mid-1960s when Roger Skime helped develop the first mass production slide rail snowmobile suspension. These Cats have a real heritage for understanding snowmobile performance at every level.

We’ve been extremely impressed with the F8s 794cc twin since our first ride of this docile big bore honker. In the past, 800s tended to have a very limited power band that seemed to give you all the range of an electric power saw. You were either on the power or instantly off it. The latest Arctic Cat 800 twin was the first of what we call the “new” big twins. These new 800s have a throttle-friendly rev range that allows you to ease into a drive-off or hammer a drag race. The engine action is predictable and helps make this trail sled easy to guide through fresh powder.

Arctic Cat combines the 160-plus horsepower of these 2011 sleds with a snow gripping 15-inch wide by 128-inch long track. The Sno Pro comes with the more aggressive 1.25-inch lug profile while the LXR features one-inch lug height to propel this ride through new snow.

You can get more power by opting for the Z1 Turbo Sno Pro with its turbocharged, one-liter four-stroke, but for all-around performance riding, the savvy reality is one of Cat’s “small” 800cc-powered F8 models. While we have no serious complaints about that Z1 Turbo version, we admit to liking the F8 versions much better as they feels less nose heavy and the fuel-injected two-stroke twin responds as flawlessly as the four-stroker.

But, because we are spoiled, we prefer the LXR with its “bennies” of electric start, push button reverse and Cat’s digital/analog instrument gauge, which reads big and obvious, giving you the reality of your on trail performance. Arctic Cat’s F8 series has become one of the least hyped, but most “real” power sleds on the trail. While the F8s may be low on hype, they are very big on reality, making them it one of our most favored sleds for this season.