Calculating powder performance by the numbers

Numbers and data. Like ‘em or not, it makes the world go around and sometimes our head.

January 22, Poker Peak near Palisades Reservoir, Palisades, ID, was the second day, and one set aside for crunching the numbers and cracking the mountains.

Before our on-the-snow tests, test rider Kevin Allred weighed the three 800 mountain snowmobiles in their wet configuration. The Assault we did not weigh, nor the Nytro MTX as it was not delivered to the receiving dealer in time for us to lift. These weights are recorded in our early impressions story, 2011 Mountain Sled Preview, Where Did the Weight Go and Who Has the Power?.

For day one, our riders consisted of Sr. Test Rider, Kevin Allred, John Summers, Greg Huntsman, and Kenny Anderson. Joes like you and I, not pros. (For their background check the bios.) 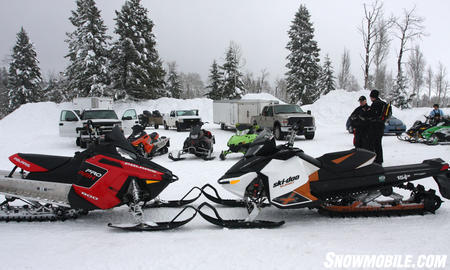 Base camp, day one.

For day two, our riders consisted of myself and Kevin again, and a new set of Joes, Kim Steele, Danny Stowell, and Travis Adams. (See bios.)

Each snowmobile was given a best dealer setup, per elevation requirements. Each motor had been broken in according to OEM specs.

Before beginning this series of evaluations, Kevin Allred spent many nights after work placing miles on the snowmobiles. He rode the trails near Rexburg, ID explicitly following OEM recommendations for motor break-in. He was particular to ensure the Yamaha Nytro MTX received its first 300 miles at an average speed of 35 mph. Likewise the Summit E-TEC 800 was handled similarly, receiving 300 miles before it was cut loose. 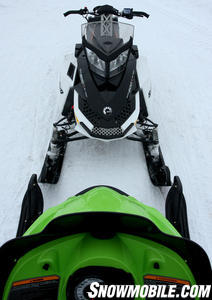 The Summit’s 36-inch ski stance worried us that it may reduce its ability to carve around the hillcross gates. We were wrong. The Summit proved nailed down.

Day Two: Hillcross elapsed times, ascent straightaway speed times – to include fresh track and packed snow, fuel and oil consumptions, and actual miles traveled versus track miles recorded on the snowmobile’s odometer. Unfortunately, severe cold weather caused problems with the batteries on our GPS units, which were mounted to each snowmobile’s handlebar. Despite installing new and fresh batteries, the units gave inconsistent data for the day’s runs.

The test rider impressions and comments will highlight Part Two when we get the sleds in the powder. Here’s who they are with riding background.

Greg Huntsman From: Idaho Falls Occupation: Project Controls Engineer at the Idaho National Laboratory Years riding: 20 Current snowmobile owned: 2007 Ski-Doo Rev 800 Adrenaline Number snowmobiles owned: 4 currently, 9 total Favorite riding type: “I like to mix it up. Shooting big bowls is exhilarating for a few runs, but gets old soon, and I find myself looking for a new adventure, and that is technical riding mostly; especially at the beginning of a ride when my muscles are fresh and full of energy. The most enjoyable rides are those where new areas are discovered. It’s fun to shoot through the trees and climb the next mountain to see what’s on the other side.” 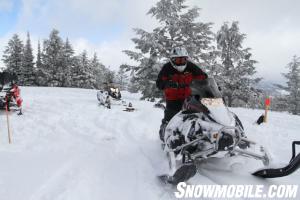 The uphill speed run proved a good test for track hookup. Both loose snow and packed snow tests were run. All the snowmobiles were staged and idling to assure a hot pipe when each driver hammered down.

Danny Stowell From: Rigby, ID Occupation: Paramedic/Firefighter Years riding: “I have been riding for 40+ years with my first snowmobile being a 1972 Arctic Cat Cheetah. I perform medical support for Mountain West Racing, and am an official with Mountain West Racing, this for the past 16 years.” Current snowmobile owned: “I don’t own a snowmobile at this time but last owned was a 2008 Yamaha Nytro; actually Yamaha sponsored the race circuit with snowmobiles.” Number snowmobiles owned: 15 over the years as well as 10 Yamahas through the race circuit. Favorite riding type: Boondocking in the hills and trees. “I desire to learn more about technical mountain riding.”

To study the data, refer to the info tables following this editorial piece. Here from our evaluations are the data points plucked from our tests. 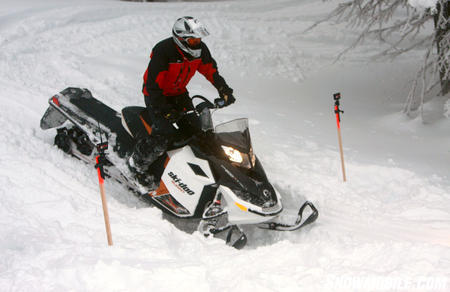 Kevin Allred sets the Summit in the hole to begin its hillcross run.

Analysis: All snowmobiles are within 22 seconds. Yamaha’s Nytro MTX held its own against the 800s. The Summit’s 36-inch stance did not limit the Summit’s cornering capabilities. The short track Assault (144) played the numbers well. 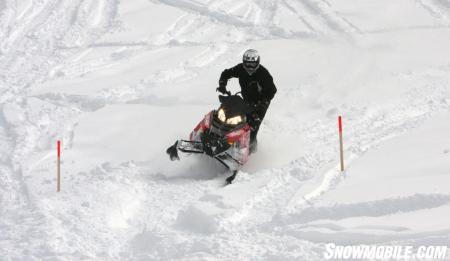 The hillcross courses favored no tread length and for the most part, motor size. Here, from a distance, Kenny Anderson hauls the RMK Pro through the gates and around the bends.

Analysis: Like hillcross day #1, the M8 clicked off the fastest time. This hill favored the 800 mountain sleds, yet the Nytro MTX and Switchback Assault held their own. For Hillcross #2, though the overall times are quicker than Hillcross #1, the deeper snow for day #2 separated the field with a wider average time. Again, the Summit’s 36-inch ski stance did not limit its cornering.

Analysis: Like Hillcross #1, this event had a narrow spread; the 800cc mountain sleds were within a half-second of each other. The Switchback Assault recorded an 8 second time, exceptional for a 144er. The 130-hp, four-stroke Nytro’s time is respectfully close to the higher-powered 800s. The M8 held the quicker time, but its spread is razor thin over that of its competitors.  The Assault spun its 144 track with anger, trying to hook the snow like a 153/154/155.

Each snowmobile was rolled right or left to ascertain tip over angle. Here, Kenny Anderson found the Summit’s balance point while Kevin Allred shouted out the number to the document recorder. 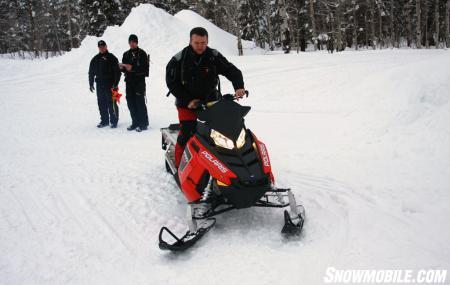 Turning radius was sketched out for each sled. Notice two riders with notepad and tape measure who gave independent views to our work.

Analysis: The M8’s spindles assure a short radius. The shorter length Assault with its 144 track also too had a tight circle.

Analysis: Mountain snowmobile only. Polaris is this season’s lightweight winner. 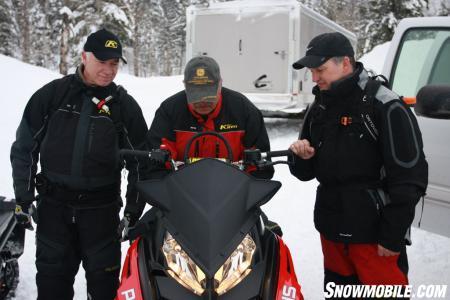 Kevin Allred with Kenny Anderson and Greg Huntsman ensure the RMK odometer, elevation and engine vitals are spot on. GPS units were mounted onto each snowmobile’s handlebars. 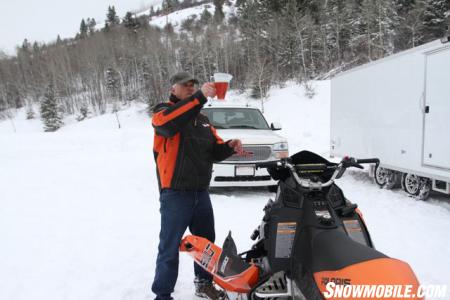 After each day’s ride, oil volume, in ounces was dumped back into each snowmobile to record consumption rates. Here Kevin Allred is reading the ounce-marks.

Analysis: Polaris’ CFI 800s used the least amount of oil of the 800s, with Cats Suzuki and Ski-Doo’s E-TEC using the most.

Analysis: AA batteries do not like meat locker temps.

Analysis: Like day #1, the CFI motors from Polaris were oil stingy. The Cat and Ski-Doo motors are liberal on oil use. Yamaha’s four-stroke, like a car, is a no-worry motor.

The data presented here shows that in the 800 mountain snowmobile class, all three OEM brands run close to each other. On any given day, condition and driver dependent, one 800 brand will eclipse another. But all in all, as Kevin Allred noted, “We proved nothing, yet we proved everything. Everything in the sense that no snowmobile is a bad ride.” 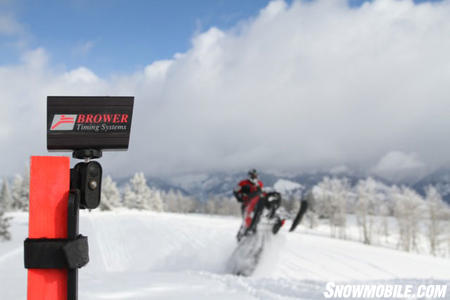 The timing light system we used for the two days proved accurate, reliable and dependable.

Stay with us when we bring you Part II and our test riders’ seat-of-the-pants impressions.