More Than an 800cc Trail Tamer

Polaris essentially created the crossover niche with the marketing idea of “Build it and they will come.” Come they did. Well, buyers bought into the crossover concept and the other Original Equipment Manufacturers (OEMs) followed suit; Cat with its Crossfire, Ski-Doo with its Renegade and Yamaha with its Nytro XTX. As history goes, the Switchback is the original.

From its inception, the Switchback’s visibility in the marketplace was cyclic, with Polaris reinventing its personality many times, mostly through track length and lug height. Yet there was a point in time when sales were dismal and Polaris thought of scrapping the Switchback. 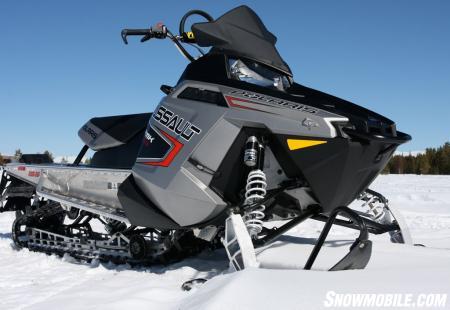 There’s plenty of “Eye candy” in the base model with Walker Evans shocks, Pro Taper handlebar and Rush-style front styling.

In model-year (MY) 2009, Polaris introduced its extreme backcountry RMK, dubbed Assault. In all reality, it was more hyper-Switchback than RMK. Nonetheless, many customers purchased the IQ RMK Assault. For MY2009 and 2010, Snowmobile.com’s powder crew flogged the Rockies on many RMK Assaults. It became near and dear to our mountain team. As the Assault was originally built on the IQ chassis, we could not figure out its odd track length — 146 only. It did, however, compete nicely against Cat’s HCR and Ski-Doo’s Summit XRS in hillclimbing events. With 2.0-inch lugs and a stiff track compound, it was at home on hard pack snow, but out of shape in waist deep December and January powder.

Again, was the IQ RMK Assault more Switchback than RMK? What we concluded was Polaris built a crossover sled to its Switchback crossover line.
Regardless, the IQ-chassis RMK Assault was a sales success. Polaris tracked and trended its purchase numbers, discovering that slightly more than half of all IQ RMK Assaults were purchased by flatlanders — trail burners and ditch bangers — in the Midwest and East. Do the math. Mmmmm…is there a message there? 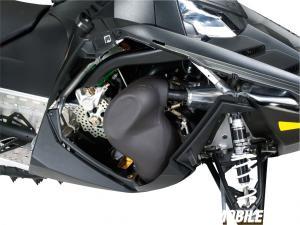 Polaris pulled weight from everywhere, including this lighter but more efficent exhaust canister.

With Polaris rolling out a nimble, agile and smartly designed Rush in MY2010, and for MY2011, a new Rush 800 and Pro-Ride RMK, it was obvious to Polaris the Pro-Ride concept should roll through to its Switchback line in the 800cc class. Polaris lets you choose your Assault, then you choose your topping of RMK or Switchback. The 800cc Switchback Assault helps Polaris resuscitate its 800-powered crossover line for 2011, positioning itself as the king of light weight, power and functionality in the crossover line.

Polaris’ promotional material on the Switchback Assault states, “Is it a RUSH? Is it an RMK? What exactly is it? Quite simply the perfect 50/50 Sled. Trail gearing with added flotation. The Assault for the Flats. This is the weapon of choice for all-around terrain domination. A blend of RMK heritage and trail-proven RUSH technology. The Switchback Assault can run the logging roads or head for the trees.”

The 800-class Switchback only comes to dealers in the Assault shirt and tie — silver/gray mixed with black and white accents. However, a Spring-only Switchback Assault was offered to early buyers. The Spring-buy Snow-Check special Switchback Assault is badged “Orange Madness,” and was available with either the 1.352-inch Cobra track, or a 2.0-inch lug track. All other specs are identical to the stock Switchback Assault . 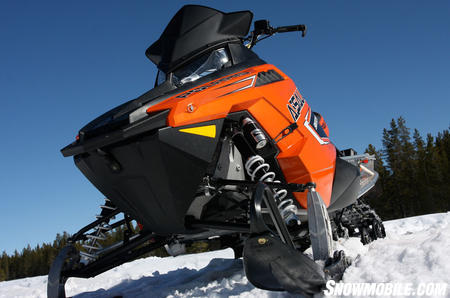 The early purchase version came in a flashy orange with a few extra goodies to make parting with your cash easier.

But for you guys who mostly stay on the trails, slopes and meadows (such as Michigan’s Upper Peninsula) the Switchback Assault or Orange Madness Assault with the 15-inch wide Cobra track with 1.352-inch lugs will deliver your lunch hard and fast. 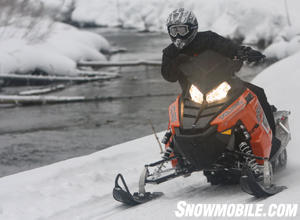 If you want to hit some jumps and then race your buddy down the trail, chances are the 800 Switchback Assault is for you.

The Assault’s oomph comes from the latest iteration of Polaris’ Liberty 795cc 2-stroke, liquid-cooled, Cleanfire fuel injected (CFI) Twin cylinder motor rated at 150-plus horsepower. Bolted to the mill is Polaris’ P-85 primary clutch with a Team LWT driven. This clutch and motor combo is the same as the RMK Assault and is tough enough for the Switchback Assault. And to keep the Switchback Assault owner away from warranty claims, motor strength was poured into the CFI 800 Twin to improve longevity.

But let’s talk function. We are mountain riders. Yet, don’t exclude the fact mountain riders rip trails and boonies, and the Snowmobile.com Mountain and Crossover Team does plenty. For us, a crossover snowmobile must meet our demanding compromises. We don’t expect a crossover to bang with an RMK, Summit or M, but it should muster up a good fight. Likewise, a crossover sled is not expected to straighten out the curves like an MXz, or F-series Cat or Rush, but it should come close. Riding the two “8-oh-ya” Switchback Assaults in West Yellowstone, we found the longer skid (over the Rush Pro 800) compliant for smooth riding across ticked off moguls. To complement the rear skid, the front suspension handled the chicanes and S-curves with ease and confidence; very Rush like.

What are the chassis differences between the Switchback Assault chassis and the RMK Asasault chassis?

We appreciate the Switchback Assault’s snocross inspired wide runningboards and smartly-designed toe hooks. These kept us locked in and locked down for mogul pile driving. Wind protection, and this was a surprise, was good – equal to the RMK. The Rush skis were bullied a bit by the 144-inch tread, especially by the optional two-inch paddle track, but with adaptive throttle and brake control, and body positioning, the Switchback Assault assaulted the grumpy S-turns with minimal ski lift, push and scrub.

The Switchback Assault really is a best-of-both-worlds snowmobile. It is nimble on the trails, comfortable to ride due to its longer suspension (over that of the Rush), Rush-style wide freestyle seat (over that of the RMK Assault) and superb shocks. Its Rush-style handlebar swing, not like the RMK’s mountain specific stand-up style swing, gives the rider the needed body positioning to aggressively sit and lean into a short-bend corner. Conversely though, if pushing a Switchback Assault into RMK Assault-dom, then the handlebar swing may upset your boondocking and sidehilling battle plan. The Switchback Assault dresses out nine- to 11-pounds heavier than the RMK Assault; and those numbers are nothing to sweat about as this is still a lightweight crosser. To that end, we feel that Polaris has launched a near perfect 800-class crossover sled. 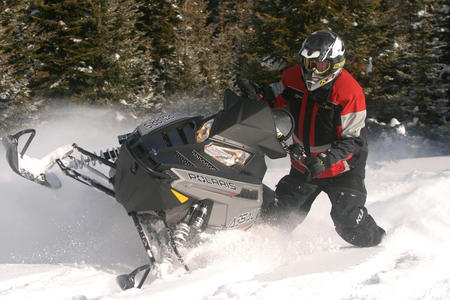 Back for 2011 is the Protaper aluminum handlebar. The hand-warmer controls are off the handlebar down by the gas cap.

Now that we’ve off-loaded some base opinions, here’s another one. We deem the Orange Madness Switchback Assault with the optional Series 4.0 two-inch paddle track to be the boss Switchback Assault (but we’d add the mountain strap to the Pro Taper handlebar for good measure). Any Switchback Assault — silver/gray or orange — leaves us pleased to slap the trails, meadows and boons on. This lightweight sock-it-to-ya rocket delivers.

The Polaris Switchback Assault is impressive. On the trails it held corners almost as well as a Rush. Is it fast? Oh yes, very fast. With the extra bulk and weight gone (from the IQ chassis) the engine has nothing to do but propel the snowmobile fast. So how is it in the steep and deep? With the shorter track it isn’t as well suited for powder. It also comes with Rush skis which do not give much flotation. On the other hand, while throttling the Orange Madness Switchback Assault with the RMK track, I was a little concerned as I followed a Pro RMK into the trees on to a mountain side. With a little more effort (over that of the Pro RMK), I was able to pull it up on one ski and ride with confidence. I was also impressed with the Switchback Assault’s track speed as I was able to climb some pretty steep stuff. It is impressive, though certainly not an RMK killer when taken off trail; but it is not meant to be. Its purpose is dual-purpose, and it does that remarkably well.

Jumpers, track and trail killers, and droppers are going to love this sled with its light weight and impressive suspension package. This should be one of Polaris’ bright spots for sales next year. 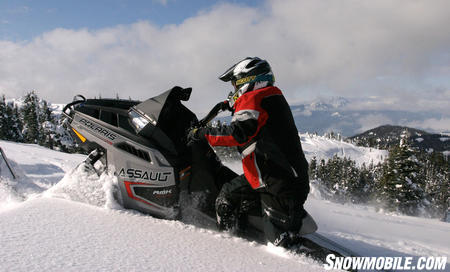 The stiff durometer competition track is ideal for hillclimb and hard pack snow conditions, but is probably not the best in the light fluffy stuff.

Originally, the Switchback concept from Polaris was to build a trail sled with off trail capabilities. As this concept took off, trail riders soon appreciated the smooth ride the Switchback delivered courtesy of its longer track, as well as the benefit of aggressive hookup without losing much top end speed. I am not Snowmobile.com’s expert trail guy, but I do know what works and what doesn’t. Given that, the two Switchback Assaults we rode and evaluated are very good trail sleds. As far as off trail capabilities, they are pretty serious mountain sleds, in fact many western mountain guys would be happy with the Switchback Assault.

As far as the RMK Assault with the two-inch block track, I need to stress this is a track designed for competition hill climbing; in that environment it’s awesome. Yet, in backcountry powder riding it’s a handicap. So, choose your sled carefully to get the right track combo. As Matt mentions, the Series 4.0 powder track on the Orange Madness Switchback Assault (the snow check special), is the track used on the 2010 RMK 700; it is better-suited for deep powder riding than the two-inch block track on the RMK Assault.