Yamaha prides itself on being different, but equally so, being the same. Let’s explore this for a minute.

No different than Ski-Doo with its Summit line, Polaris with its RMKs and Cat with its M series; Yamaha builds a snowmobile for the mountain rider who likes to boondock and hill bust. But Yamaha is proudly different in how it goes about it — choosing to use a four-stroke motor instead of the more common two-cycle. In fact, a four-stroke motor is the only engine Yamaha installs in its mountain snowmobile, the FX Nytro MTX SE.

And that is not a bad thing.

Unlike the many variants that Cat, Ski-Doo and Polaris offer, Yamaha gives the buying public only one mountain sled, although there are choices in track length between a 153 and 162. For 2011 Yamaha’s MTX SE is basically the same as the 2010 model, with a few subtle updates. 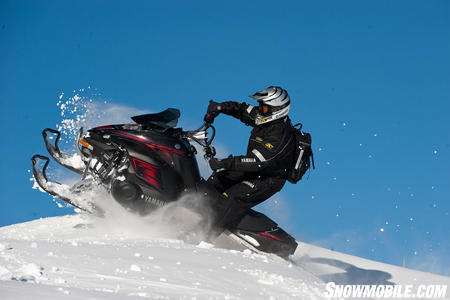 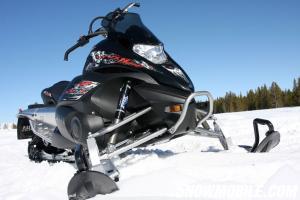 The 2011 FX Nytro MTX SE front suspension, the FXG2, stretches the MTX’s ski-stance to 40.7-inches, center-to-center. The double A-arm front suspension cradles Fox FLOAT 2 shocks. From previous tests, we found that the FXG2 front suspension gave optimum trail performance and did not hinder side hilling. The FXG2 has no sway bar, which helps the MTX better handle mountain terrain. Travel for the front suspension maxes out at 8.5-inches.

We do believe that the Yamaha Nytro MTX SE ski is superior to the other builders’ powder skis. It supports the Nytro MTX in deep snow and allows it to make sharp turns in deep powder. This ski is important to the MTX’s deep snow function. As the Nytro’s motor is heavier than the other OEM’s two-stroke engines, it’s important that the Nytro ski keeps the nose aloft.

For the rider, the MTX utilizes Yamaha’s “sport rider-forward position.” This design places the engine low and back in the chassis, which Yamaha refers to as mass centralization. Also, the Yamaha’s design ergonomics puts the rider in a forward posture that is both aggressive and comfortable. 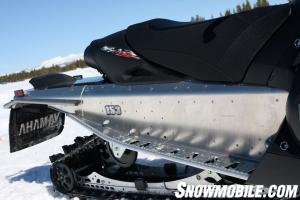 For good or for bad the Yamaha Nytro MTX has the widest running boards of any mountain sled.

To match the tall and forward position, a single-piece, dual-hooked handlebar is standard.

The MTX has a tall and narrow seat which is comfortable and does not slow down foot transitioning — where the rider is moving leg and foot from one running board to the other.

The MTX’s tunnel is light with runningboards that are tipped up to an 11-degree angle to improve both tunnel and running board clearance for deep snow conditions. You should expect less hanging up (resistance) from the runningboards. Yamaha also built in big evacuation holes that clear out unwanted snow from the runningboards. Tunnel stiffeners give the boards needed strength when taking the MTX off a cornice or across deep-impact moguls. 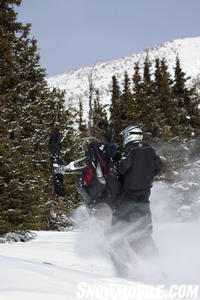 Underneath the tunnel is Yamaha’s Pro Mountain Air rear suspension; a light and strong rear skid. This rear suspension uses Fox Float 2XV shocks instead of springs and control rods. The added 2XV air chamber on the shocks has the volume to give the rider superb mountain handling. The front swing arm uses a Fox FLOAT 2 shock. Travel for the rear skid is 14.5-inches.

This semi-coupled rear suspension, combined with a shallow 18-degree approach angle allows the MTX SE to pop up on top of the snow when throttle is applied.

The Pro Mountain Air rear suspension has machined hyfax rails that are light and strong — read durable. Yamaha keeps the rear skid light by minimizing idler wheels and using ice-scratchers. All Yamaha sleds come with replaceable idler wheels on the bearings to lower maintenance costs on the rear suspension.

Propelling the Nytro MTX SE is the Yamaha- and Camoplast-designed single-ply Maverick track. This track is light, strong and flexes well. This track’s durometer (which is stiffness over flexibility) minimizes lug memory, where the lugs take a set — fold over — and don’t rebound to an aggressive vertical position. The 153 and 162 Maverick tracks are 15-inches wide with 2.25-inch tall lugs.

The EFI motor features a unique Engine Braking Reduction System that permits a small amount of air to pass through the fuel injection system when the throttle is released. This allows the sled to coast.

At the rear end, Yamaha’s patented rear exhaust dump helps the motor build horsepower by using a straight exhaust pipe; which coincidently, reduces the amount of under-hood heat and distributes weight to help balance the sled. 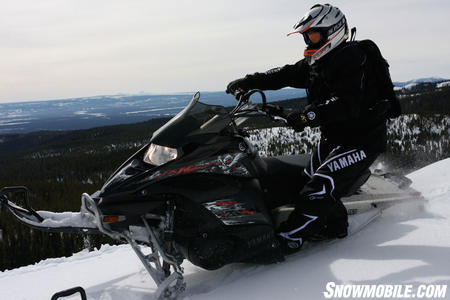 The Yamaha Nytro MTX is all about smooth power with its 3 cylinder four-stroke Genesis engine.

The FX Nytro MTX SE air intake design pulls in fresh air from around the headlight and feeds it through the radiator fins for engine cooling. This is beneficial in low-snow conditions. 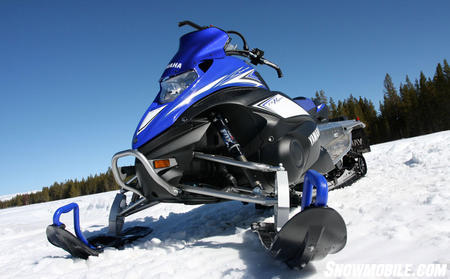 The Genesis 130 FI (electronic fuel-injected) engine proves more than adequate at getting the job done. The near 41-inch ski-stance didn’t hamper side hilling capabilities; credit too, goes to the ski, which holds a fine edge into a slope. Down the trail the FXG2 front end handles the chicanes and whoops like its sibling, the crossover XTX. 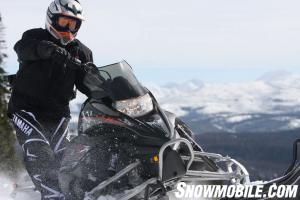 Yamaha engineers did a good job making the Nytro MTX feel light on a side hill.

With all this being said, the FX Nytro MTX handles side hill maneuvers very well. Additionally, the sled feels light and responsive when stuffed into a side hill. We also found with its smooth 4-stroke power, the Nytro MTX is particularly fun to boondock as it’s very easy to handle.

From our testing, the Fox Float shocks are stiffly set from the factory. The torque-filled motor, with factory limiter strap settings on the rear skid, caused the MTX to over-transfer when taking on a steep ascent with crusty or hard-packed snow, meaning that riders must throttle down the motor to keep the nose on the snow. As with any mountain sled, the Fox Float rear skid needs to be dialed in for the driver’s weight and terrain.

The Nytro MTX churns well in deep snow — it clubs any mountain with deep powder. However, as mentioned before, we found its over-the-motor steering post kicking us out of position when tree whacking and ravine bashing. Again, that is us. You may feel differently.

We applaud Yamaha for building a 153 SE. In mile deep snow, the 162 would loose much of its oomph, the longer track chewing up precious horsepower. We believe the shorter 153 is the perfect fit for the Nytro MTX SE. With that said, the longer 162 will float in waist-deep powder better than the 153, but we like track speed. 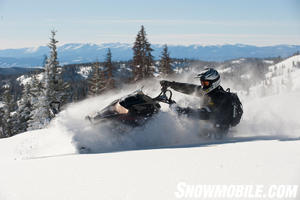 Economically, the Nytro MTX SE is a money-conscience snowmobile. Its operating costs are significantly less than two stroke mountain sleds. When pouring expensive $20.00 to $30.00 per gallon synthetic oil in a two-stroke, per outing, credit cards quickly max. After riding a Nytro for three years, we understand Yamaha’s marketing claim that states its four-stroke snowmobiles are miserly. They are — and appreciatively so. Plus, Yamaha snowmobiles are reliable and oh-so dependable. Also, we appreciate the MTX’s electric start. Suh-weet. In essence, when calculating $3.50 gallon mid-grade fuel and costly synthetic two-stroke oil, the Nytro MTX makes “money-sense.”

When asked by novices, who desire to snowmobile in the Rockies for the first time, we point them to the Nytro MTX as its easy starting and low operating costs will please them and will keep them in the sport. Additionally, the Nytro MTX is as sweet on the trails as it is in the mountains. Likewise, for those of you veteran snowmobilers yearning for simpler and more economical snowmobiling, then the Nytro MTX is a logical choice.

Lastly, when taking the Nytro MTX into the mountains, owners must understand, this is not an 800-class mountain snowmobile. If an owner expects it to compete head-on against a Summit 800, Cat M8 or RMK 800, then they will be disappointed as we find the Nytro MTX competes very well in the 600- to 700-class niche.  With that in mind, an owner will be fully satisfied as they operate it in its envelope. As for us, we have tested the Nytro MTX against the “8s,” because we work in an 800 world. We pushed the Nytro hard, but understood its limitations against the 8s. If throwing the Nytro MTX against the 800s, be patient when working the steep-n-deep, it will make the ascents, not with arm-stretching speed, but it will crest a peak by using some old-school right and left cuts.

The Yamaha Nytro MTX SE has a great four-stroke engine that is smooth, pulls hard and has reliability second to none. I am impressed with the Nytro’s light feel through the handlebars, which means the engineers did a great job of designing the MTX chassis.

Boondocking with the MTX Nytro is fun — it responds fast to rider input. However, I feel with its horizontal steering, I have to swing the handle bars more, which tries to push me off the sled. Basically, it is not as easy to maintain a side hill as the Apex MTX; which is no longer in Yamaha’s product line. I liked the power of the Apex, but not necessarily its girth. I like the smaller lighter Nytro MTX chassis, but not its horizontal steering. The perfect Yamaha mountain sled would be a combo Apex and Nytro. 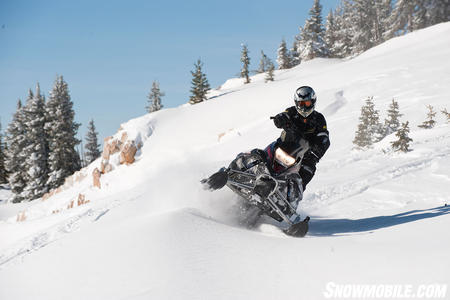 After spending a season on the 2010 Nytro MTX SE 162, we learned much about the sled’s capabilities — what it can and can’t do (all snowmobiles have limitations).  We managed to push it outside its comfort zone.

For 2011, Yamaha offers the MTX in a 153, which for my riding preference is the track length I like the best. I sometimes felt the 162 track labors down the Genesis’ 130 horsepower motor. Then to be honest, at other times the 162 just plain ripped. The issue here is track speed verse flotation. All-in-all I really enjoyed our Yamahas throughout the years, especially when it comes to the lower operating costs. As mentioned, this is for real. We throw the Yamaha Nytro MTX into our 800 two stroke world, but the Nytro MTX is in a different horsepower class, that of the 600s, and that is where it best fits. Yet, the FX Nytro MTX surprises me how it hangs in there with the 800s. The FX Nytro MTX is a very good mountain snowmobile, and deserves serious consideration.