2019 Mountain Snowmobiles of the Year 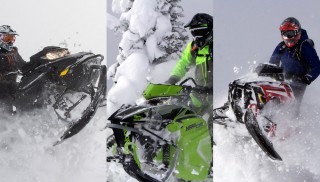 With summer fading away, it’s time to honor our favorite sleds for those of us who like to venture off-trail with the 2019 Mountain Snowmobiles of the Year article.

With the calendar approaching September and Hay Days around the corner, it’s time for our 2019 Mountain Snowmobiles of the Year article. This is the article where we announce our best-of for the upcoming model year mountain and deep-powder crossover snowmobiles. We give crowns to: mountain snowmobile of the year, ultra-deep powder, most-improved, four stroke, deep-powder crossover, introductory (beginners), and backcountry huckster.

2019 Mountain Snowmobile of the Year

Quoting from Kevin Allred, Snowmobile.com Sr. Test Rider, Mountain Team, “In nearly two decades evaluating and testing mountain snowmobiles, I have to say the Alpha One represents out-of-the box thinking, and that’s a good thing from my competition-is-good perspective.”

From Brent Burton, Snowmobile.com multi-year test rider, “The Alpha One is a boondocker’s dream.”

The Alpha One Mountain Cat, with its single-beam Alpha rear suspension, its reduced vehicle weight, reduced track inertia, reduced track resistance, and reduced track rotating mass, all dialed into the Ascender chassis (well-proven from 2018), just may be the most-balanced and easiest-to-ride mountain snowmobile to date. It takes little rider energy (input) to become a highly aggressive rider – in a controlled manner.

Arctic Cat elevated its innovation standard with the Alpha One Mountain Cat; this snowmobile is a complete package with Cat’s recently introduced Team clutches, new responsive C-TEC motor and a much improved Ascender chassis. Adding the single beam rear suspension to the mix throws an interesting variable into the mountain snowmobile arena.

The single beam rear suspension works perfectly with the front suspension, making the Alpha One, in our opinion, the most responsive rider-to-chassis snowmobile to date, giving challenge to this same claim we’ve given the 850-powered fourth generation Ski-Doo REV Summit X and SP. This is going to be a fun season.

Burton said in an earlier article, on the Alpha One, “I wasn’t riding the same kind of skinny ‘edge’ as I have in the past. I actually feel less [negative] feedback in the bars; the sled holds a very stable line when traversing a tracked up meadow or a tracked up sidehill.

Yes, the Alpha One is down on displacement, as compared to the new 850 Pro-RMK LE and 850 Gen-4 Summit X. With the Alpha’s nimbleness, its much-reduced track resistance and its ability to move itself forward with such ease, we say, big frigging deal; 50cc is a trivial matter.

The 154 or 165 Alpha One Mountain Cat with its cinched-in Ascender chassis, smoothed-out and cleaned-up Next-Gen body cladding, opened up toe wells, dropped and rolled chaincase, Arctic Cat-influenced Team clutches, lock-out rear suspension via a Fox Float 3 QSL shock, an 11-pound weight loss from the previous year’s Mountain Cat; the Alpha One Mountain Cat will shred. Here are our two earlier articles on the 2019 Alpha One:

2019 Ultra-deep Powder Snowmobile of the Year 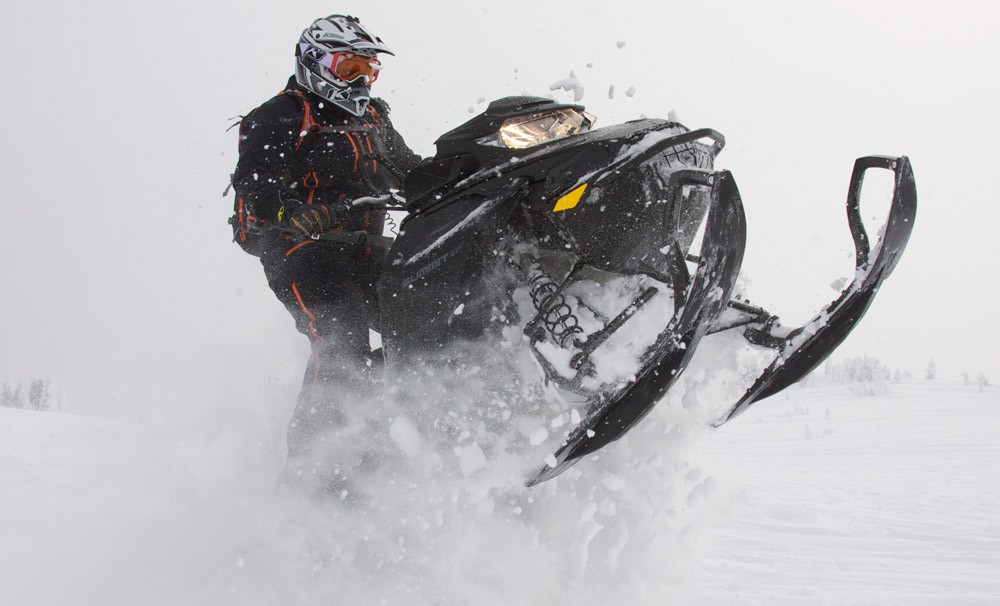 Not an easy pick. This, along with the Most Improved category, was our most debated. We give this again to the Gen-4 Ski-Doo Summit X 175. Though the Pro-RMK 174 deserves every bit of recognition as the 175 Summit X (and SP), it is the Summit’s 16-inch wide track (versus the Pro-RMK’s 15-inch wide) and nose lift from a quick throttle snap to hop around a tree blow hole, that give the Summit 175 a slight margin lead over the Pro-RMK.

However, the new front end on the Pro-RMK LE 174, its planted stance, its new grunt-filled 850 Patriot motor, and its coil-over Walker Evans shocks make it an ultra steep-and-deep champion as well.  We believe, head-to-head, with the Pro-RMK LE 174 being lighter than the Summit X, the two match about as evenly as two snowmobiles can be.

To that end, the Gen-4 850 Summit X 175 acts much like a 165 Summit X, but more stable on a mountain’s side from nose to tail. The 175 Summit X is nimble and fast and powerful, and the embodiment of all things super deep powder.

Check out our feature the two super long tracks here.

2019 Most Improved Mountain Snowmobile of the Year 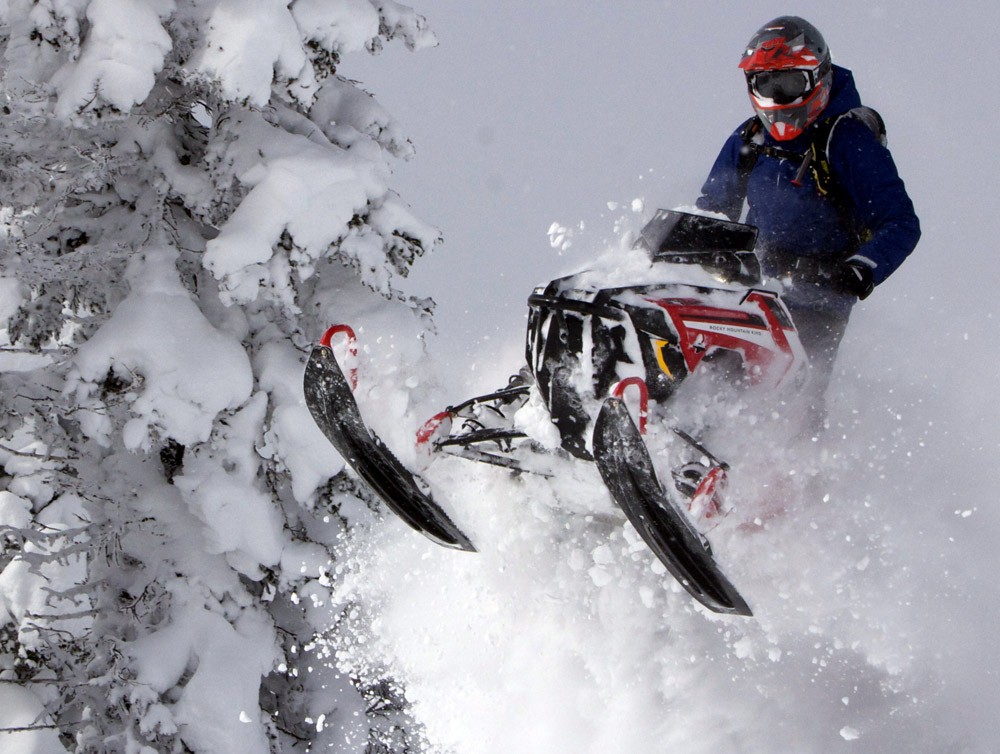 Polaris spent four years developing the Patriot 850 motor to assure maximum durability. The Patriot 850 dissipates motor-vibration harmonics that negatively affect fuel droplet size; this motor incorporates fine technology from the automotive industry to assure uniform fuel delivery and droplet size. The motor’s pistons are single ring pistons where the steel piston ring has an automotive coating called PVD (Physical Vapor Deposition) which decreases wear in highly-charged gasoline engines – which reduces friction losses that occur between the ring and the cylinder running surface. This PVD technology is on some high-performance luxury car brands. The 850 Patriot motor is heavier than the Liberty motor, but has low inertia ratios, increased horsepower (9% more than the Liberty H.O.) and torque. The motor runs cool from its 100-degree thermostat. The Pro-RMK remains the power-to-weight master.

The React Front Suspension provides effortless and precise handling. With little pressure from the arms and hands, and minimal downward force to a runningboard, the 155, 163 and 174 Pro-RMK LE 850 sets on edge. It has eclipsed the 2018 Pro-RMK in initiating a sidehill cut.

Now, we add a confession here. We had a disagreement among the team. This editor’s sentiment also goes to the 2019 Arctic Cat M8000 Sno Pro, as it does go to Polaris’ Pro-RMK LE 850. The twin rail Float Action M8000 with its recalibrated shocks at all four impact points – front and rear – is wholly underappreciated. The M8000 Sno Pro is a powder player and steep-and-deep master at low cost. Honorable mention this editor gives it, with two fist pumps and a “Heck ya.”

2019 Four-stroke Mountain Snowmobile of the Year 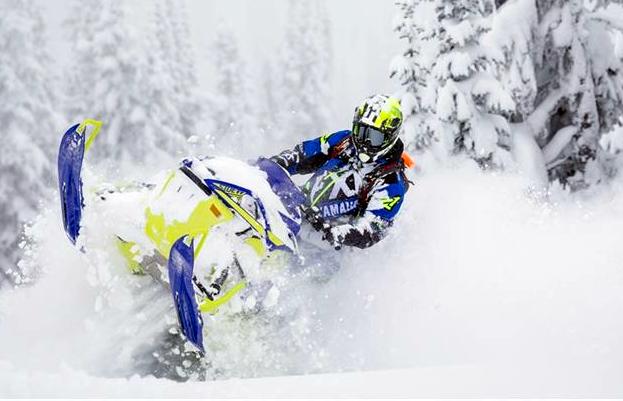 This we give this to Yamaha and its Sidewinder M-TX LE. Yamaha’s turbocharged four stroke motor in the 162 M-TX LE has virtually the same horsepower from 100 feet to 10,000 feet; as M-TX LE climbs in altitude, its 200-plus horsepower goes with it. The Sidewinder’s three cylinder 998 with 12 pounds-per-square-inch max boost, is a 200- to 205-horsepower (some claim 210) all day at all elevations; its power-to-weight bests its stock two-stroke competitors as the air thins.

The motor is gentle when motoring along in the trees where a driver can hold a steady-state throttle position to negotiate through and around tightly-spaced trees. Given that, when needing to pop up the nose and tail dance around a tree, a quick throttle pulse delivers this need; the motor quickly responds. When dropping the RPM after a full-throttle assault, the Sidewinder M-TX LE free wheels like a two stroke.

The 2019 Sidewinder M-TX S LE is fun to ride when on boost. Its three-inch PowerClaw track pulls the snowmobile along quite well. The Yamaha Mountain Ski quite easily handles the big motor’s weight.

The Sidewinder M-TX LE is an enjoyable mountain snowmobile, but drivers should respect its weight and boosted power. To that end, the M-TX LE’s narrow 36-inch ski stance and its low and reward-positioned chaincase make it fairly nimble.

2019 Deep-powder Crossover Snowmobile of the Year 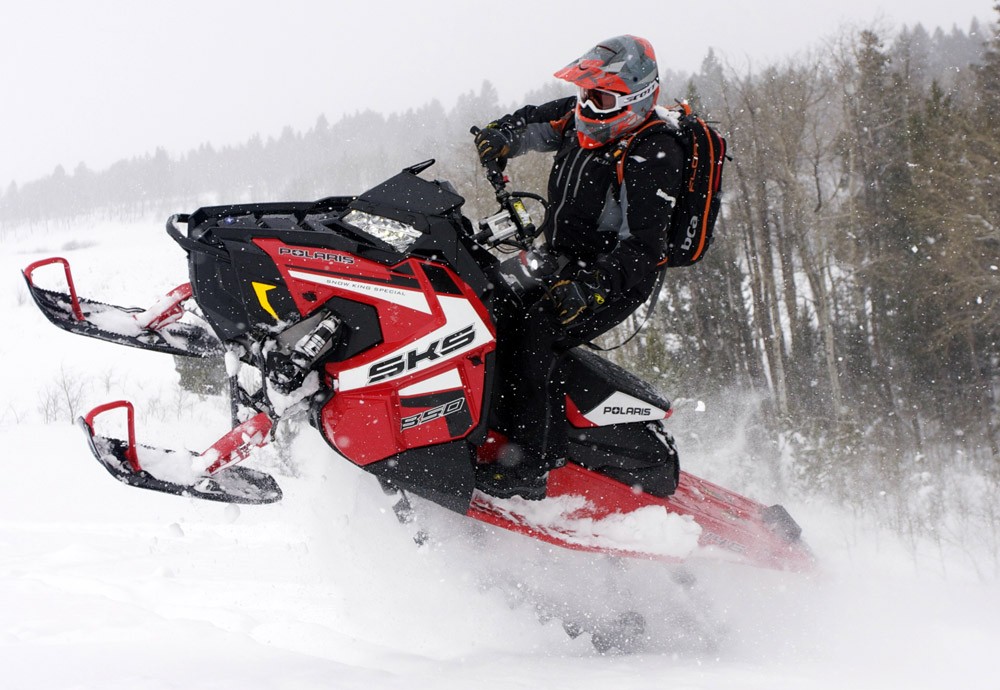 Easy pick here, the 2019 850 SKS 146 from Polaris, this as last year, but with more satisfying horsepower and torque.

Polaris aims the AXYS 146 SKS with its new 850 Patriot two-stroke motor for the rider who wants their deep-powder fix as much they want to shoot the trails and meadows.

Under tunnel is the IGX – Ideal Geometry Xover – rear suspension delivers a smooth ride excellent handling for mountain and rough terrain; the IGX’s geometry controls pitch. The IGX has two Walker Evans compression adjustable piggyback shocks. Lastly, the shock’s settings allow owners to set desired load resistance and reaction. The IGX’s rearmost rail beam is tipped-up making the 146 act like a 136 when on the trail.

At the SKS’s nose is the AXYS RMK adjustable front suspension where its ski stance can be set to 39 – 40- or 41-inches. We prefer the narrowest, 39-inches. The 2019 146 SKS 850 does not come with Polaris’ new React Front Suspension, which is exclusive for the Spring-buy Pro-RMK LE. The skis on the SKS 146 are the powder-specific RMK Gripper. The SKS’ A-arms are one-piece forged aluminum arms that are tough and light.

The SKS with its new 850 motor, wide hybrid PowderTrac runningboards, uncoupled IGX rear suspension and Gripper skis, is a crossover that is highly-adept at boondocking, powder play and burning twisting trails.

2019 Introductory Mountain Snowmobile of the Year 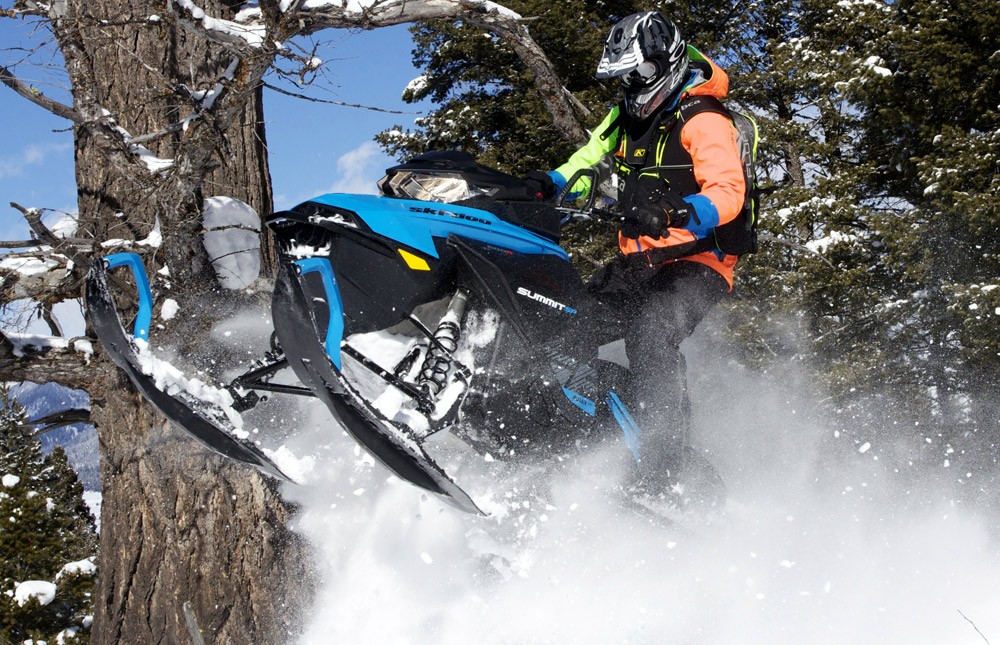 The new 600 R E-TEC is surprisingly responsive.  Like its 850 sibling, it is smooth and has ample torque on the bottom end.  Burton commented of the 600, “I’m really not sure if I was blindfolded I could easily tell the difference between the 600 and 850.

2019 Backcountry Huckster of the Year 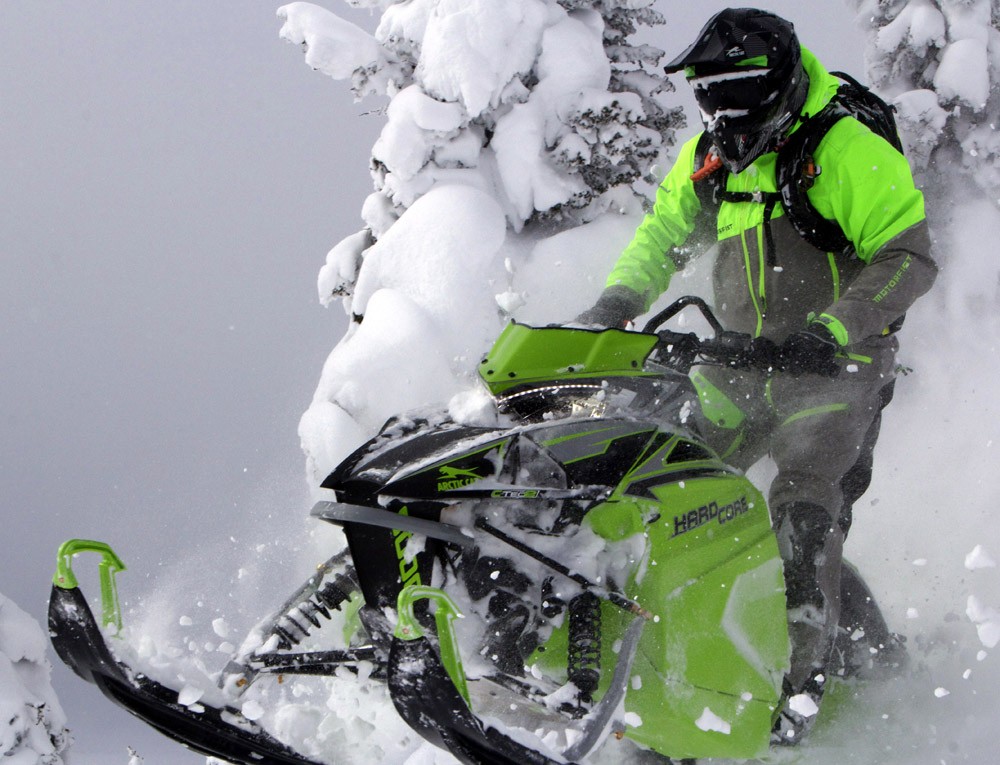 Arctic Cat’s HCR – Hill Climb Racer – returns in 2019 and is known as Hardcore. With Cat’s cancelling “HCR” it has dropped the wide and onerous feel the HCR had, and gave the Hardcore life by giving it all 2019 Mountain Cat amenities – Ascender platform and NextGen panels – and its own shock package.

Arctic Cat reinforced the Hardcore’s twin rails on the Float Action rear suspension not to bend.

Read about our review on the Hardcore here.

There you have it