A Polaris icon returns better than ever

Back when Polaris laid claim to being the Number One selling sled company, the Indy led the way. It came in many versions and often served as the first sled that many of today’s riders ever rode. It was legendary as a racer and it came to dominate both ovals and cross country terrain like few sleds ever have. It was iconic and it gave Polaris snowmobiles an identity that carried the company from Sno-Travelers to the Rush.

For 2013 the Indy returns, filling a narrow product niche that falls between the budget-based Shift and the Rush. With the fan-cooled 550 Shift priced at US$6,399 and base 600 Rush just a buck under 10 grand, the 600 Indy sits right in the middle at US$7,999. As you’ll no doubt note, there is no 600 Shift in 2013. Gone. Replaced by a much better product that is offered in two iterations — the base 600 Indy and the 600 Indy SP. The latter is the one you’ll want, not because it returns the SP nomenclature, but because it returns better value that makes it well worth the extra bucks.

If we were being a bit snarky, we’d tell you that the new for 2013 Indy is most likely what today’s Polaris trail sleds would be like if the Rush’s Pro-Ride suspension didn’t work out and get the final “go-ahead” from the Polaris bean-counters. The Indy gets a pretty straightforward slide rail rear suspension. Granted it manages to absorb up to 13.9-inches of trail bumps, almost as much as the Rush Pro-Ride. But the ride quality is vastly different between the two. The Indy goes old school with an inside the skid frame coupled linking action between the front and rear shocks. If it’s a high quality ride you want, then bypass the Indy and go right to the Rush with its external rear shock and uncoupled progressive action. Let’s not pretend. The Rush Pro-Ride is the superior set-up and may be worth the extra two grand difference to you if comfort and ride is your key demand.

A stiff chassis and Rush-based front end make the Indy SP a fun and nimble ride.

But, let’s also not pretend the Indy isn’t a lot of fun. We’ll tell you that the Indy makes you giggle and reminds you why you ride. We figure the Indy is Polaris’ direct attack on Ski-Doo’s lightweight TNT models. These two models are both light, nimble and very much fun to toss around in the twisties.

As with Indys of the past, the 2013 Indy SP handles the off-trail rough as well as groomed trails.

When it comes to looking at what you get as an upgrade versus the now-discontinued 600 Shift, the Indy offers a lot. The front end is essentially the Rush front suspension. If you opt up for the SP you get the base Fox Racing gas shock with the internal floating piston to control upwards of nine-inches of travel. The regular Indy gives you gas cell RydeFX MPV front shocks from Meritor. But, if you should want to go for a serious upgrade, you could fit Walker Evans shocks to the Rush-shared Indy front end. Maybe we’ll see that as an option for 2014 if the Indy proves to be a hit.

Why wouldn’t the Indy be a hit? Is the price differentiator between, say the Indy SP and the Rush Pro R enough? At $9,000 for the Indy SP versus $10,800 for the 600 Rush Pro R are you really shopping price? If you want the best stuff, is more money going to matter that much?

There is value in the Indy series. The key for us in the 600 Indy model line up is the added value we perceive with the Indy SP version. This is the one you want. You will be much happier with it overall. Why? For one thing, the SP not only gets the Rush front end with the Fox shocks, but that front end becomes night and day better thanks to the new Pro Steer skis, which are not offered with the base Indy. 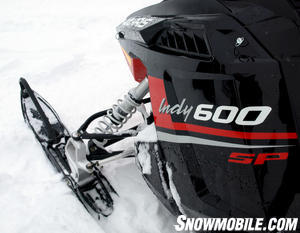 Give Polaris credit here. The new ski works. If you have a chance to test ride a base Indy versus the Indy SP, do it. Don’t tell us you can’t feel the difference the ski makes. The steering, handling and on-snow bite goes from simply okay to “Wow!” It’s truly noticeable — immediately. The ski accentuates all the positive nuances of the Rush-style front double A-arms — like the variable caster and the revised easy turn-in steering. Darting is mitigated. All of the positive suspension changes that were incorporated last year are made better by the skis and serve to make the SP the standout in this Indy pairing.

Another plus for both the Indy SP and the base model is the use of the upgraded Polaris-built 599cc Cleanfire twin. This engine’s semi-direct injection system was modified last season where it appeared in the 600 Pro RMK. Now, that twin-cylinder, two-stroke will be used across the board and makes quite a difference in the 449-pound SP. We found easy-to-like throttle crispness as we rode in the mile-high plus altitude of our West Yellowstone test site. Combine this improved engine response with a stiff chassis, excellent front end and nimble character and you have a sled that will readily challenge the refreshed 2013 Ski-Doo TNT 600. 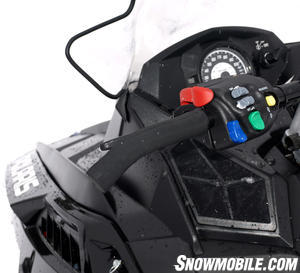 There’s more to like with the SP, which comes with this year’s new one-piece handlebar. Polaris finally gets it and the new bar set is a winner as it blends in a nicely curved handgrip, putting the SP in the mix for ease of handling where quick lock-to-lock steering is crucial. This new Polaris handlebar feels very comfortable in all conditions. Plus, like Yamaha did a few seasons back, Polaris added heat out to the bar ends of the grips. No more bellyaching from us about the handlebars. We also like the standard 3.5-inches of riser height, but we’re certain you can find accessory risers from your dealer if you wanted to change this.

What is the Indy SP like on the trail? Well, it feels extremely agile with excellent room for the rider to maneuver from side to side or stretch out. Because the Indy chassis draws from the Rush design, it is said to be 300 percent stiffer than any previous straight tunnel models. We’ll accept that, as the sled is incredibly easy to butt-kick in the corners. Just kicking over our rather prodigious fanny heading into a turn let the sled’s back end slip nicely into a dirt track-style controlled slide, which we could easily control by whipsawing the Pro Steer skis. That is fun! Like the old days. 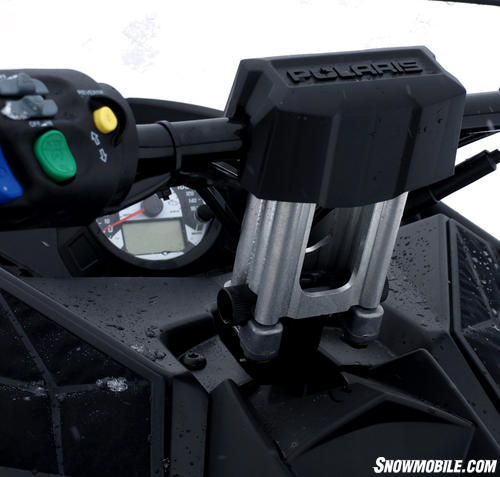 The standard handlebar riser is 3.5 inches.

That’s the key to the all-new for 2013 Polaris Indy SP, fun! The sled is all about reinvigorating your fun quotient. The sled has all the right pieces for a great day on the trail. It will give you a superior day of snowmobiling on groomed trails and in tight technical esses. It is a great sled to remind you that snowmobiling has always been about having f-u-n.