A really big work sled is for truly serious users

If you need a serious over snow vehicle, Ski-Doo has just the ticket. Smaller than a Ski-Dozer but quite a bit larger than an MXZ, the 2012 Skandic SWT is the spiritual replacement for the long retired twin-tracked Alpine. Both share the same purpose in their mechanical lifetime — doing serious work.

Ironically Ski-Doo kind of lists the Skandic SWT (Super Wide Track) in the marketing guise of utility. It fits utility the way a Freightliner compares its usage to a Ford F150 pickup. This is a serious work sled. Even the Ski-Doo marketing types don’t mince words in their description. They refer to it as a “massive snowmobile workhorse.”

With that in mind, we’ll vent our literal hurt feelings encountered as we test rode this beast. Recovering from a very nasty motorcycle crash that rearranged our right leg, we found this sled’s extra wide seating actually painful. We can only imagine that the seating area was conceived for a very tall, very bow-legged cowboy used to riding Clydesdales and not cutting horses. The tall seat and extra width emulate the snowmobiling equivalent of a Freightliner’s control room. Perhaps, this sled could tackle the route used on “Ice Road Truckers.” It is certainly rugged enough. 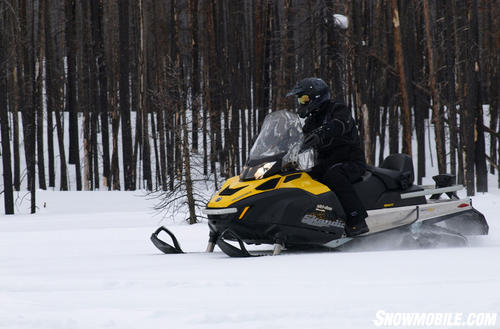 The Skandic SWT grips snow with a huge 156-inch track that measures two-feet in width.

Rugged and tough, the Skandic SWT is the model you want to cross the Yukon or battle the open tundra in a far northern wilderness. You’ll never want to get this beast stuck, but the chances of that happening are not as great as you might think. The SWT part of the sled embraces a very huge, Sasquatch-like footprint that puts a two-foot wide by 13-foot long rubber track on the snow. The lug height measures an adequate 1.25 inches. This huge track is managed by a two-speed forward synchromesh tranny that was developed by Lynx snowmobile engineers, now incorporated into the BRP camp. Indeed, the Skandic Super Wide is extremely well suited for the Arctic Circle areas of the world. 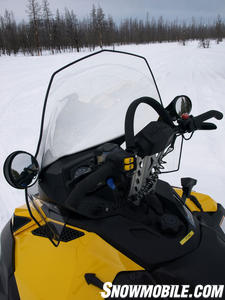 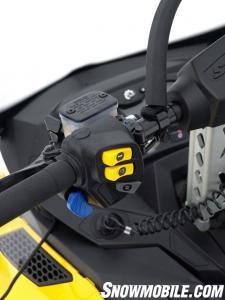 Simple but effective handlebar warmer and other controls are easy to pick out.

While this is a heavyweight sled, it does have some sense of sophistication. The basic underpinnings come from the “utility” versions of the REV design, referred to as the REV-XU platform. You’ll find a great deal of function in this model. The tall seat offers a commanding view of the tundra ahead. A huge, and we do mean huge, windshield sits 23-inches upright. Surprisingly there is minimal distortion in such a wide expanse of Plexiglas. You can watch for approaching polar bears thanks to dual rearview mirrors built into the wind breaker. 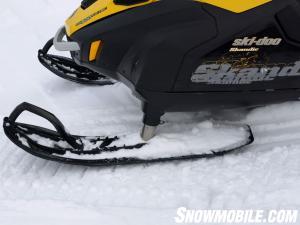 The Lynx strut suspension is simple and provides 6-inches of travel. 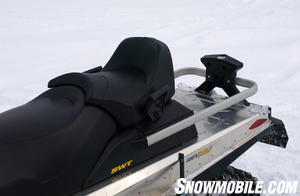 While the Super Wide demands a wide beam to fit the seat, the sled is actually extremely compliant once its Rotax powerplant gets it underway. The front suspension consists of shapely round telescoping cylinders that are controlled by Motion Control shocks. The skis are extremely wide to balance the flotation of the super wide track. But steering ability seemed relatively easy, even when breaking trail, surprising for such a generously sized sled.

We chuckled a bit as we studied the command center and noted a mountain strap. It isn’t likely that you’ll be throwing your weight out beyond the runningboards like you might on a Summit. We imagine that this sled tells you where it’s going to go, not vice versa. It is very stable and likes to maintain directional momentum.

The Super Wide comes with a choice of powerplants, both 600cc Rotax twins. The 600 E-TEC two-stroke is the more powerful and the one we’d specify, as we’d like the nearly doubled horsepower that the E-TEC offers versus the ACE 600 four-stroke. The ACE 600 should offer better mileage and we’d expect it to be quieter, but it tops out at about 60-hp, which is not what we want if we’re hauling serious loads. The Super Wide should excel at managing a ski slope and the attendant needs of hauling sleighs full of gear. It should also accommodate specialty-grooming gear and could be used to maintain narrow “feeder” trails. 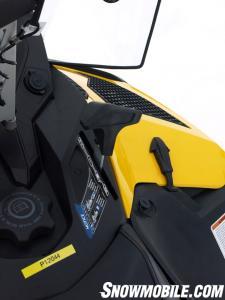 The Skandic SWT shares a heritage brought to the sport by Ski-Doo’s Alpine, a single ski, twin-tracked warrior that was popular with serious winter workers. The Skandic SWT uses a single track but puts down a similar amount of footprint as the Alpine with its two 15-inch tracks.

The Alpine earned the respect of ski resort owners, power line surveyors and far north workers. We fully expect the Skandic Super Wide will earn a similar amount of respect for the same reasons. This is a ruggedly built, powerfully engineered snowmobile that will tackle the most serious winter climates. There’s a rugged bumper, underseat and rear storage, as well as an articulating rear suspension that is especially critical in work situations.

We figure that this is the sled you want when you have to count on getting out and back from who knows where. It is tough. It is engineered for work. It is powered by a choice of two proven motors. And its well-designed two-speed transmission gives you low speed grunt power or higher speed cruising capability.

If you need a serious workhorse, the 2012 Skandic Super Wide Track deserves a serious look. 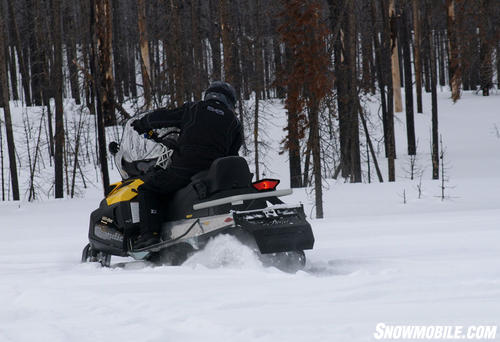 Despite its “bigness” the SWT is surprisingly agile off trail.