With MXZ basics and Grand Touring "goodies," the SE wins in plush performance but the LE could be so much more.

If you loyal readers have followed our love-hate appreciation of Ski-Doo’s GSX models over the years, you know that we love the sled’s MXZ attributes and the luxury touches brought over from the Grand Touring line. But we have yet to find Ski-Doo giving us the “right” combination of each to make us unfailing supporters of the GSX.

For model year 2013, we actually find the “down scale” LE version more suitable to our idea of speedy, comfort snowmobiling. The LE versions, available with either the direct-injected 600cc E-TEC two-stroke twin or the 1200 4-TEC four-stroke triple, mimic the more expensive SE “upscale” models as to powerplants. While there is the choice of two-stroke versus four-stroke, you’ll find that horsepower and effective power to weight will be similar with either version as the LE uses a two-stroke 600 E-TEC to power the narrower REV-XP and the SE versions are based on the wider XR platform, which was designed to accommodate the three-cylinder four-stroke motor. 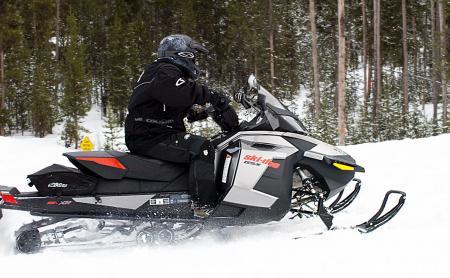 Ski-Doo’s SE version of its GSX luxury sport sled puts the premium on luxury with heated seat and 4-position tilt steering. And, if the 600 E-TEC isn’t potent enough, you can upgrade to the 800 E-TEC.

If we go with the two-stroke 600cc E-TEC, you’ll find that it will feel sportier in the LE as the REV-XP chassis is both narrower and utilizes the shorter 120-inch track. The heftier SE features the 137-inch track and suspension. The big differences come in the suspension differences. The LE has a more traditional SC-5 set-up, a long utilized design prevalent on the MXZ that was recently updated to the rMotion specification. 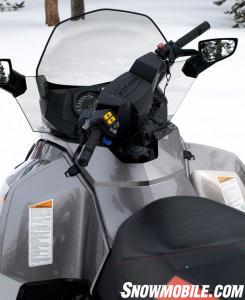 The rider’s view aboard the GSX SE shows off rider-friendly switches, including a rocker switch for the air-control rear suspension.
Air ride sets the tone for the SE package. The SE’s Air Control Suspension comes over from the Grand Touring and can be adjusted as you ride by simply working a rocker-style switch mounted on the handlebar. While the concept is great, the execution is a bit slow as you might expect. Working the rocker switch causes an air pump to breathe revised settings into the 5-position air spring. It works well – just not instantaneously.

The LE rear suspension relies on a Motion Control shock and a variable rate rear arm shock that gives you a compliant rate, but one that’s not as fade resistant as those in an MXZ set up. You will find high-pressure gas shocks up front on the ski suspension on both versions.

So, here’s what you need to consider when thinking through the purchase of a Ski-Doo GSX. Are you looking for comfort over sport handling? If you want the better handling and greater prowess on trail, the LE would be the better choice. The SE will do well on groomed trails and it should handle rough trail conditions better due to the bridging effect of the extended length 137-inch track and its air ride suspension. Since the center-to-center distance for ski stance of 42.4-inches is the same for both and the double A-arm ski suspension is essentially the same, we don’t see any great advantage there. We do expect the REX-XP based LE to be a bit more nimble than the enhanced REV-XR platform. 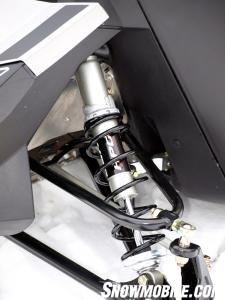 The GSX features a dual A-arm front suspension with gas shocks that’s similar to the one seen on select MXZ sport models.
Now, as for creature comforts, the SE wins. Here is where that Grand Touring expertise comes in. The SE gives you a heated seat with two pre-set levels of warmth. The LE offers a nicely styled REV-XP seat complete with a storage trunk, but it’s not heated. The SE also gives you automobile-like tilt steering with a choice of four positions.

The SE series takes the GSX toward the comfort side of trail riding. The LE series offers a degree of plushness but tends to go more towards the sport side, but we don’t think it goes far enough. In our opinion, there could be greater differentiation between the two versions. Keep the SE as the luxury sport model, but why not make the LE the performance sport model by adding improved shock packages front and rear? These don’t have to be harsh riding packages, but a package that gives you fade-resistant, comfort controlled shock travel. Maybe offer a comfort-tuned rMotion package as an option for early buyers. Create a special designer sled wrap. What’s wrong with giving Ski-Doo buyers the option of a plush riding but sport cornering MXZ X type of sled?

The SE version fits the niche for comfort-first rider buyers. These folks want an innovative and plush air ride and like the idea of tilt steering and nice-to-have heated seating. This is the same type of rider who probably tows his sleds to the drop-off point in a Ram Limited with heated seats, heated steering wheel and full upgrade stereo. In fact, we expect that the SE version with the 1200 4-TEC would be the first choice with this buyer. It’s quiet but has the low-end rumble and pull of a Ram’s Hemi V8 (We’re exaggerating, okay!). The SE 4-TEC would be a great choice.

The top of the line GSX SE model offers this adjust as your ride air-shock rear suspension with up to 16-inches of travel.

The LE with the 600 E-TEC for 2013 is okay, but it could be more okay with just a little extra thought given to it. Ski-Doo marketers have been remarkable at figuring out model niches, but we feel that the company falls short in this category. 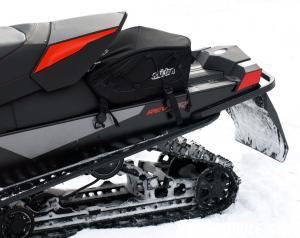 The XP-styled seat offers storage that complements the SE’s standard tunnel bag.
It’s like they fear offending the MXZ buyer by offering the GSX LE as the “loaded” MXZ. We don’t think they’d lose sales, but find new ones from the guy who’s “aged” out of the pure performance category and into a new performance-plus category that gives him the MXZ goodies combined with GSX features like a heated seat. An adjustable handlebar wouldn’t be necessary, but added outlets could be handy and how about some built-in storage areas that vent underhood heat to keep a cell phone safe and dry?

As we said in the beginning, we are ambivalent about the GSX line. The SE seems to have a solid core that takes the longish 137-inch track length to a nicely detailed comfort-first buyer. But the LE could be so much more in the Ski-Doo line. It’s not really a plush comfort rider nor is it a performance ride with benefits. It just seems as though it was created as a price “alternative” to the SE. As a model, the LE deserves better than being the low-priced GSX.