Ski-Doo expands rMotion to the Renegade, rethinks the Summit and continues to evolve its rider-forward platforms

Ski-Doo comes into the 2013 model year determined to hang on to its leading marketshare as both Polaris and Arctic Cat seek to seriously cut into it. Perhaps a bit tentative last season with a limited roll-out of the rMotion sport suspension, only minor tweaks to its Renegade crossover platform and touring sleds, Ski-Doo retained the lead in the short-track trail sports performance segment and sought to increase its share of powder-riding Ski-Dooers.

Coming off a winter that some weathercasters referred to as “snowmaggedon,” sled sales for all brands were on a roll in the preseason and through Christmas with industry executives expecting upwards of a 30-percent up tick in unit sales. But then last year’s snowmageddon turned into “lack of snowmageddon” through January causing a halt to those predictions. Still, snowmobile manufacturers feel good about the potential for continued enthusiasm heading into the 2013 model year.

Ski-Doo’s rMotion suspension enjoyed a good reception and it will be expanded to more sleds, most significantly the Renegade stretch track models. This segment is enjoying significant growth as trail riders effectively redefine the segment by demanding sleds that have power, performance and more versatility to provide good trail feel and a capability to break out and conquer fresh powder.

Although the cross country or trail sports performance segment hit a decline over the past couple of seasons, Ski-Doo will not release its hold on its leadership and has enhanced the MXZ and evolved its REV-XP platform into what will be known in model year 2013 as the REV-XS platform variation. Much of the evolution centers around a new origami-inspired style treatment that offers a new look of complex geometric contours, such as the use of gloss side panel inserts, a more aggressive fascia, and cleverly contoured vents as an overlay to hide panel gaps for a cleaner, more integrated look. 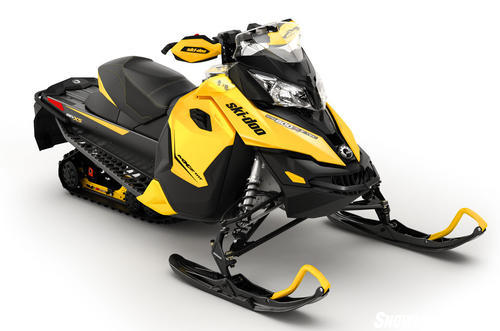 You’ll find that the REV-XS design is more than looks. There’s function as the side panels provide more freedom for leaning aggressively into corners. The revised runningboards are said to be 300 percent stiffer thanks to addition of an extruded edge grip, which lets you position a boot securely for off-trail running. Trail performance gets smoother with new eDrive2 drive on the 4-stroke triples.

As usual, there will be advantages for early season ordering. The 2013 X-RS model is “spring order only.” There will be a special pre-order X version as well that incorporates premium shocks, rMotion rear suspension and a choice of Rotax 600 or 800 E-TEC two-stroke twins.

Unlike last season, in-season buyers will find the rMotion rear suspension available on select TNT models. The leader for serious buyers has to be the 2013 MXZ TNT with an electric start-equipped 800 E-TEC as the power of choice on the new XS platform. Gas shocks, rMotion rear suspension, new LED tail light, new center-hinged snow flap and heated glove box highlight the popular model. The TNT 600 E-TEC twin and 4-TEC four-stroke 1200 triple continue into 2013, but now you can get them with the rMotion adjustable comfort suspension.

Look for an expansion of the eDrive transmission on the 4-TEC triples for 2013. This eDrive 2 drive pulley maximizes the flat powerband of the strong pulling Rotax 1200 and should offer increased belt life and improved response. The eDrive 2 will be standard fare on all 4-TEC sport performance triples. The 600 ACE and fan-cooleds will stay with the original eDrive. 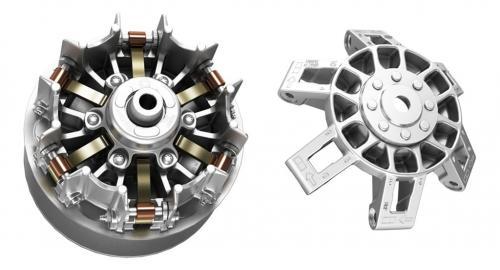 Based on the success of the original eDrive, the eDrive2 offers smoother response from Rotax’ 1200 4-TEC triple.

Interestingly, it was Ski-Doo’s introduction of the 2002 Renegade that proved a market existed for a crossover hybrid that offered the versatility of a short-tracker for groomed trail running with the flotation of a stretched track for off-trail exploration. We say interestingly, because by 2001 Polaris dropped all but a 700cc version of its SKS model just as Ski-Doo came with three engine choices —600, 700, 800— for its new MXZ Renegade series. Heading into 2013 Ski-Doo revives its Renegade by making rMotion standard on the Renegade X, Adrenaline and Backcountry models. To underscore the revitalization of this series, Ski-Doo will offer Renegade X packages for spring order only. The “X” with E-TEC power comes in a stretch chassis version of the REV-XS design and adds the new for 2013 137-inch rMotion rear suspension complete with premium gas shocks. The 1200 4-TEC Renegade X retains the wider REV-XR chassis, but expect smooth power delivery from the eDrive 2 setup.

Serious off-trail riders who spend more time breaking through powder than riding over groomed snow will want the Renegade Backcountry X, which combines features from the trail-oriented REV-XS chassis with the body panel upgrades found in the 2013 Ski-Doo Summit series. The “X” version will be pre-season order only, but there will be a base Backcountry utilizing the older REV-XP chassis but also incorporating the latest rMotion rear suspension. Both Backcountry models offer either the 800 or 600cc E-TEC twins to power a 16-inch wide PowderMax track.

For in-season buyers, there is the Renegade Adrenaline with choice of 600 or 800 two-stroke twins or the 1200cc four-stroke triple. 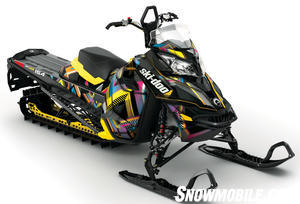 At first glance the 2013 Ski-Doo Summit looks a bit different. And it is, as Ski-Doo intends to grab a more significant piece of the powder segment. The 2013 Summit comes with plentiful trickery as powder sled engineers rethought how a powder sled needs to work. You’ll note that the 2013 model carries a chassis designated as the REV-XM Summit. You’ll find that flowing edge “origami” concepts carried over into the new deep snow series. And you will feel some downright new-think in the rear suspension and deep snow track.

The REV-XM chassis caters to rider ergonomics and how the rider works the sled in powder. The chassis design allows a more forward foot position and a three-times stronger extruded runningboard with substantially greater snow evacuating area. The grab strap is now rigid and more angular for increased leverage. 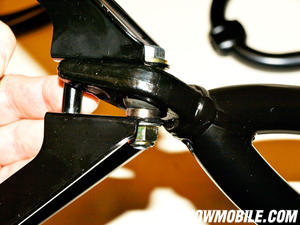 The sled’s side panels have been curved or as Ski-Doo calls it —powderdynamically shaped. The idea is simple enough. The edges have been rounded to get the sled in a roll position for “boating” through the powder.

But, wait, there’s more! Look for a totally unique rear suspension that is designed to flex laterally inside the tunnel, so the sled will bank into the terrain better. To achieve this, Ski-Doo suspension designers added a ball joint hinge between the rear arm and the drop link. You’ll find split flex points on the front arm to further induce controlled roll for responsive and predictable action in powder. This package is known as the tMotion rear suspension and is unique to the Summit. It also was conceived to work with the latest in Ski-Doo’s flexible track technology, which centers 12-inch fiberglass reinforcing rods into the track to allow two-inches of flex on the track’s outer edges. Again, all of this is designed to help the powder rider initiate a roll in the snow.

As with the evolved MXZ series, the top line Summit features the dual air intake by the headlight, the hinged snow flap and a bright LED tail light. Although fitted with the heated glove box, the REV-XM Summit also claims more storage territory with an enclosed seat compartment suitable for a water bottle and spare gloves. 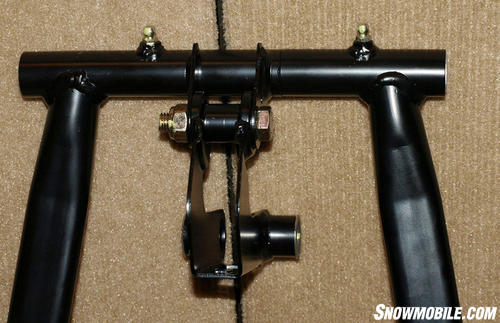 The Freeride series continues into 2013 with an 800cc E-TEC twin and three track options: 154, 146 or 137. In its third season, this sled utilizes the MXZx race sled chassis with forward mount steering post and comes with major attitude. Feel free to add a stylized sled wrap graphic package (if you order early!).

Ski-Doo’s Grand Touring two-ups and solo luxury GSX models come virtually unchanged except for the addition of the eDrive 2 on the 1200 4-TEC triple. That will be same major enhancement to the Expedition and utility models as well.

Colorful “wrap” packages are available for early orders on the Freeride.

So, what’s new? Continuing evolution of Ski-Doo’s pioneering rider-forward chassis design, a spreading of the suspension wealth as rMotion makes it to more models and tMotion debuts in the deep snow segment, increased focus on ergonomics, especially for powder riders and smoother drive systems with the eDrive 2 upgrade for the 1200 4-TEC. And, of course, look for an incredible selection of specially designed and engineered accessories.