To write about the 2014 Ski-Doo XM Summit X, we must look at the 2013 and how that first year model performed.

For winter 2012-2013, we rode, tested and evaluated a 2013 XM Summit X 154 with great expectations. From our archives, the 2013 XM Summit X 154 was a Snowmobile.com “Mountain Snowmobile of Choice;” tied with Polaris’ Pro RMK 155. Sr. Test Rider, Kevin Allred and I, through our many discussions, could not agree on which snowmobile stood on the gold medal podium for 2013, so we ended up giving out two gold medals. You’d think family could agree.

In our timed speed runs – hill cross and straight line – the Summit X was consistently our second fastest snowmobile, only separated by hundredths of a second behind the fastest; when .002 separates the two, then mostly that is due to the driver drifting wide through a gate or drifting right or left through a straight line speed run. 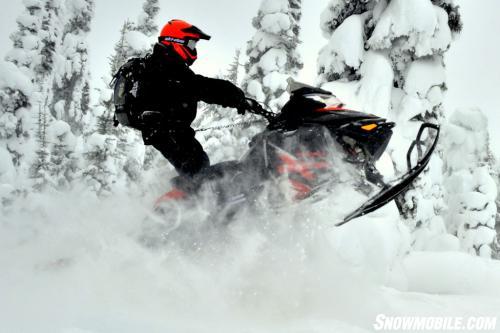 As we reported in our shootout results, our guest test riders wanted to flog this mountain 800-class snowmobile more than our Polaris Pro 800 and Arctic Cat M8 Sno Pro LE. The questions on our riders’ minds were: 1) Is the XM an XP? And 2), Does the combination tMotion rear suspension and FlexEdge track really produce good sidehilling results?” No and Yes.

VIEW: Read about the best mountain snowmobiles of 2013

The XM Summit for model year 2014 comes to the mountain rider with no changes from model year 2013. The XM worked well in 2013 and will continue to work well for this upcoming season. 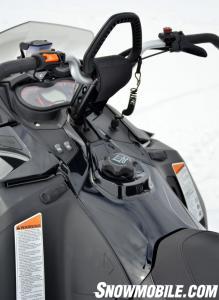 The rider-friendly cockpit has a mountain strap, properly curved handlebars, controls on the console and protected switches on the bars.

Our cache of guest test riders often had the same handling assessments for the Pro 800 and M8; in certain conditions, the drivers drove the 800 Pro and M8 in much the same way.

Guest test riders, after describing the 800 Pro and M8, would point at the XM and say, “Then there’s the XM.”

“It’s so different,” they would retort.

I then would follow-up with, “Different in a good or bad way?”

After this, the test riders would collect their thoughts and say, “In a good, but different way.” They would describe its easy roll characteristics, its easy sidehilling personality and how little effort was needed to initiate a reverse back-up-the-hill downhill sidehill turn, without using the famed wrong foot forward position. In other words, each foot planted on their respective L-R runningboard. 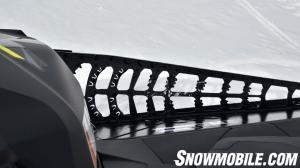 The XM performs all that is required of it, albeit in a slightly different manner from the Pro 8 and M8 (now M8000 ). For us who labor in the snowmobile evaluation occupation, we hold on to the motto: “Different is not always wrong. Different is just that, different.”

The XM is a vast departure from the XP Summit. It retains dependable power from the Rotax E-TEC 800R motor and its driver-forward position by way of centralizing the driver over the track drivers.

Given the above, the XM Summit 800 has pulled back many Ski-Doo loyalists that defected to other brands during the XP Summit years. Furthermore, the XM Summit has pulled customers from Ski-Doo’s competing brands who are looking for a lighter-feeling snowmobile through the handlebars. The XM is that: light through the bars, agile, and flickable.

COMPETITION: Read our review of the Polaris 800 Pro-RMK 155

Setting up the XM Summit X on a sidehill to initiate a cross-cut comes with minimal effort.

Chris Ruske of Ski-Doo’s Summit R&D center, Grand Lake, Colo. told us: “The XM Summit added 10 years to my snowmobiling life.” Whether you believe that or not, is up to you. For this Western Editor, I do believe Ruske; I never felt fatigued-out after a day on the 2013 Snowmobile.com XM Summit X 154. Extending the years one can ride is crucial to mountain-specific snowmobile sales, as more mountain riders are in their 40s and beyond, than riders in their 20s to 30s.

Its motor is the twin cylinder two-stroke Rotax E-TEC 800R that uses direct-injection to build its approximately 164 horsepower. From our experience, the motor is an economical one on fuel and oil. 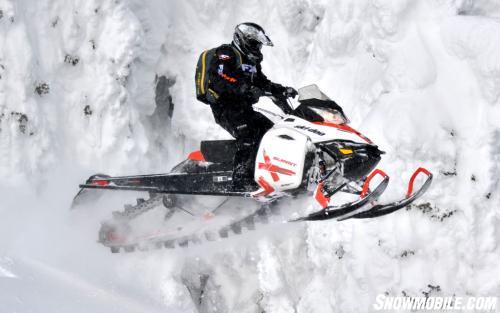 Flying flat and straight is a Summit characteristic.

The motor has an easy throttle pull, linear power delivery, virtually no smoke or smell and one-pull starts.

The drive clutch is the TRA VII, whereas the driven clutch is a quick and easy adjustable QRS. 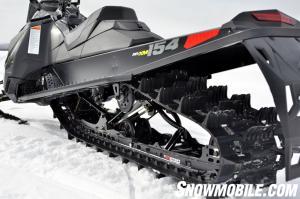 The front suspension has dual A-arms (upper and lower A-arms) with HPG shocks. Ski stance is an adjustable 35.7 or 37.4 inches. Skis are Pilot DS 2. The front end is coupled via a sway bar that can be quick disconnected, hence the label, “Quick Disconnect.” I like this and do take advantage of quickly disconnecting the sway bar.

The rear suspension is tMotion with HPG Plus shocks. The tMotion rear suspension has a ball joint hinge, residing between the rear arm, the drop link, and split flex points on the front arm, that allows it to swing two-degrees right or left, for a total of four degrees. This induces a controlled roll where more track footprint stays on the snow when sidehilling.

Secondly, the tMotion works in tandem with the Powder Max II track. The 16-inch wide track with 2.5-inch lugs has flexible edges. The track has fiberglass reinforcing rods from center out, at a length of 12 inches. With the center 12 inches reinforced, the track’s outer non-reinforced two inches flex ever so slightly (to match the hill’s slope angle). This allows the track’s edges to flex up when a sidehill roll is initiated. The track with FlexEdge technology is 16 inches wide and comes in lengths of 146, 154 and 163. 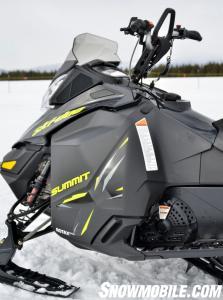 The XM Summit X has deep footwells and cutouts allowing the driver to position above the track drivers.

The S-36 package, introduced on the 2010 XP Summit, remains with the XM Summit, but is changed to accommodate the tMotion rear suspension and track. The changes include skis that are pushed forward 7mm from the spindle, as mentioned earlier, and a 10-milimeter deeper keel and flatter tail from 2012 XP Summit (the last year of the XP Summit). The XM Summit Pilot DS2 ski bites aggressively into a hill.

Ergonomics are well laid out. The handlebars have a natural curve that allows the driver’s arms and wrists to retain their natural bend. Heat controls are located on the console. The controls that remain on the bars, RER and motor kill, are positioned or protected to prevent inadvertent contact (activation)

The XM Summit X comes equipped with a multi-function digital/analog gauge that peers up to the rider, which is helpful as most mountain riders are in a standing position. The gauge reports all engine vitals and tracks altitude, to name a few. We’ve come to appreciate its easy-to-read numbers and wide face.

Located behind the gauge is a glove/goggle box. We appreciate this storage, as having a place to hold an extra pair of gloves or goggles is a huge boon to mountain riders.

The seat is nicely sculptured with a tactile texture. It is not so tall as to hinder most foot swings from one board to the next. But really, the XM Summit X can be masterfully ridden by keeping both feet planted on its respective platform. The seat does have some rear storage. Not much, but enough to appreciate.

The painted tunnel prevent snow from flash freezing. The rigid footboards with wide evacuation holes dump snow and ice with ease. The tunnel is designed to utilize Ski-Doo’s LinQ system – many storage devices can be added to the tunnel with ease. Setting up the XM Summit for downhill sidehill turns is easy as the advanced S-36 configuration, narrow ski-stance and aggressive Pilot skis keep a grip on the snow.

In the Summation, the XM Summit X is a satisfying mountain snowmobile. From our experience, it is feathery light through the handlebars. Through last winter, we experimented with the handlebars, positioning the post more vertical than the factory setting. This gave more negative feedback (impact energy) through the bars than we like. So, we agree that the factory setting is best.

We’ve also learned the XM Summit X’s nose, when sidehilling through some previously laid down trenches or hard packed chops, becomes nervous and wants to dive down off the slope as impact energy wants to kick the bars down. This is not nearly as bad as the XP Summit of yore, but it is still present and can be nuisance.

The XM Summit X can at times trench down more than we like through light and fluffy snow. This can be managed by standing closer to the bars or adjusting the limiter straps to control weight transfer through power-on situations.

Every mountain snowmobile has quirks. These are the Summit’s.

With all the above, the XM Summit X is a highly popular mountain snowmobile. Riders have forgiven Ski-Doo for the XP Summit and praise the XM for its agility, its power, its economy, its E-TEC power and tMotion. Plus, it’s just fun.

The XM Summit X has given a new lease to older riders and has given cause for folks to enter into the mountain riding world with confidence.