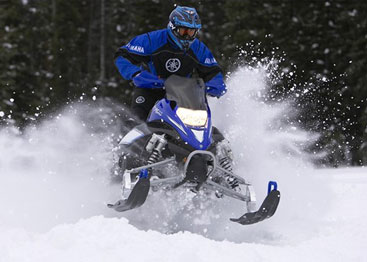 Same powerful personality with much improved on and off trail manners

For 2009, Yamaha reinvents its Nytro with an extended track version that offers vastly improved ride and handling. Wisely, the powertrain remains virtually the same.

The facts are simple. Sitting under the steering post of the virtually all-new Nytro XTX, you’ll find the same fuel-injected Yamaha Genesis 130 as last year. Expect smoother running and even quicker response as Yamaha engineering has had a full season of fine-tuning this snowmobile-specific triple. The drive system reflects updated tuning refinements to match the power delivery to an all-new extended chassis and track dynamic. Gone is the 121-inch Rip Saw track, replaced by a longer 144-incher with the same 1.25-inch height lugs. 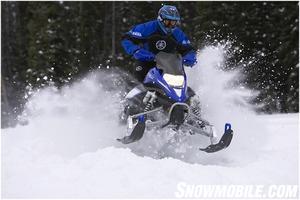 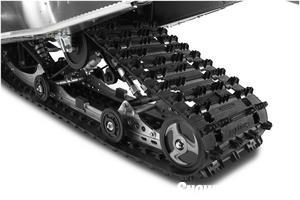 The 144-inch rear suspension uses a 6-degree flip up on the back of the rail profile.

In an on-trail riding comparison of the new Nytro XTX with the “144” track and a 2008 specification Nytro with ‘121’ Camoplast Rip Saw, the new XTX definitely seemed to like delivering power better through the longer track. While you can still get track spin on the 144 when you slam the throttle flipper from half to full throttle, the extended track length provides better on-trail control. The shorter track would spin and torque to the side more like a car’s tires on ice when you floor the gas pedal. The other advantage of the longer track comes in the ‘bridging’ effect you get over stutter bumps and increased flotation when breaking trail in fresh powder.

The upgrade from 121 to 144-inch track blows right past the use of the 136-inch track found in the LTX versions of both the Apex and Vector. The reason for the longer track lies in the new XTX sled’s closer relationship with the mountain Nytro than the trail Nytro. Still, the 144-inch track is shorter than the Nytro MTX’s 153-inch deep powder track setup.

Why did Yamaha settle on the 144? Primarily because the sled’s designers felt that they could devise a new rear suspension that would provide the handling attributes of a 121 on groomed trails, the bridging comfortability of a 136 and the added deep snow float of a 144. To gain this combination required a major rethinking of the hybrid sled’s suspension. That’s why you’ll find what Yamaha refers to as the XTX’s “…aggressive 6-degree rear tip-up on the rails.” The footprint on hard-packed groomed trails will be that of a 121-inch tracked sled, meaning you feel the sporty cornering characteristics you’d expect from the 2008 Nytro. In reality, we liked the new Nytro XTX better than the old short-track version. However, there’s more to all of it than a revised rear end. 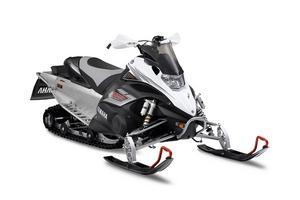 You have a choice of Team Yamaha blue and silver graphic packages. 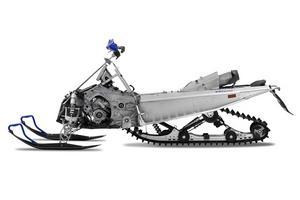 The ‘bare’ chassis look shows how low the engine is centered.

In our opinion, the XTX shows enhanced cornering due to a redesign of the front suspension. The rear end is also an improvement. However, the concept of tip-up slide rails is not new. Polaris has been there in the past and Arctic Cat has used a tipped up rail on some touring and utility sleds. The advantage is real and you will recognize it, especially when you use reverse and the track doesn’t mire itself into the snow. No, for us, the real advantage to the XTX over the previous Nytro is up front.

Think of this sled as what it is – a totally new platform for a very potent existing power system. Yamaha does not so much obsolete the 2008 Nytro as it creates a whole new level of sports performance with a new tunnel and chassis. Still aluminum, the 2009 tunnel flips up at the back a full 11-degrees to give vastly improved powder capability. That’s why we say the XTX has more in common with the mountain Nytro than the 2008 base model. There are more and larger holes in the runningboards that not only allow better snow evacuation when riding off trail, but add improved bite for your boots to keep you in contact with the XTX.

That new front end borrows from the snocross world and settles the sled way better than previous Nytro front designs. Yamaha claims that the new front end slows down the steering. Is that an admission that last year’s Nytro was extremely nervous when pushed hard in the corners? Whatever. The new design feels lower and more responsive due to added trail and revised caster angles. The new front end relies on Yamaha’s own GYTR dual clicker shocks which we’ve found to be easy to adjust on trail. There are 12 compression settings and 20 rebound adjustments, meaning that it is critical that owners read the setup manual. You’ll find a set of high-pressure gas shocks in the rear suspension: a 40mm remote reservoir shock with compression ‘clicker’ on the front arm combined with an aluminum-bodied HPG rear shock.

We found the XTX a great improvement over the previous Nytro. The handlebar set fits the rider better with its one-piece design incorporating curved bar ends. The bar sits taller and combined with the upgraded front suspension you have better leverage and, thus, better control on the trail. The XTX expands the concept of rider-forward positioning first seen on the Apex series. While borrowing from snocross, the XTX gives an immediacy desired in the deepest powder of the mountains. You sit on a new and narrower sculpted seat that has you nearly upright so you can rise quickly to react to changing terrain if you go off trail. For trail riders, you can more quickly rise to meet those bad ditch moguls and for groomed riders you can move side to side more easily to time quick twists in the trail.

With all that’s new about the XTX, Yamaha surprisingly said little about weight. Comparing the published specifications for the new XTX we find a claimed weight of 542-pounds. That’s more than 20-pounds greater than last season’s Nytro RTX with reverse and about the same as a 2008 Nytro MTX (544 lbs without reverse). The XTX’s weight will be noticeably more than the 509 lbs Ski-Doo claims for its all-new 2009 MXZ 1200 X four-stroker with similar power. It will be interesting to find out what consumers think when they have the opportunity to demo the two sleds. There may be a few chances later this winter to get a ride on each sled at the same venue. We’d be interested to know what you thought.

We figure that the extra weight of the longer track and suspension adds up, but consider that Yamaha outfits the XTX with a composite framework around the headlight area. This reflects the difficulties for any manufacturer in keeping their sleds weight down while adding new features to improve overall sled capabilities. This upper frame material around the steering and headlight area helps keep the weight low and centered. After riding the XTX we came away feeling that the overall balance of the 2009 Nytro was vastly improved over the previous year’s entry.

This is the action an rider’s view of the new XTX.

Still, we found some skittish behavior from the skis. They wanted to follow pre-existing runner tracks on groomed trails. Not as pronounced as the darting on the 2008 Nytro, the XTX retains some darting behavior. If we owned either of these sleds, we’d place a quick call to Woody’s to see if there were a set of the company’s ‘Dooly’ flattop runners that would fit the Nytro. The concept behind the Dooly is the same as a manufacturer adding twin runners under a sled’s ski. Four contact lines on the trail surface result in less darting effect. The beauty of the Dooly is that the twin skeg design bolts into the single runner ski holes. Yamaha riders have told us that they’ve junked their stock runners to switch over to the Woody’s Dooly runner. Anyway, it’s a thought.

What does the XTX feel like on the trail? First of all, there is that quick power surge. This 4stroke motor gets you pumped as soon as you switch it on. With its rear-exiting exhaust you get to enjoy a primeval sound that only motorheads appreciate. There’s a rumble as the sled rocks to life. The sound of three cylinders working at relatively low revsÑcompared to the higher revving, four-cylinder Apex motorÑis slightly intoxicating. The lack of smelly two-stroke fumes is not. When you get on the trail the power is nearly immediate and not subtle at all. The power curve seems to spike quickly with a burst of track spitting torque. This is opposite of a Vector triple upon which the Genesis 130 was built. The Vector has good low end and early midrange but drops off at top end. The 2009 Nytro XTX builds quickly and strongly to top end. It feels as though it pulls better than the new Ski-Doo 4stroke, but only because the Genesis 130 has that quick surge and not-too-subtle in your face growl. It will be interesting to actually have the two 130-hp. 4strokers side by side on a lake. For now we can’t truly imagine which is stronger.

We can imagine which sled we like better on the trail. While the XTX is substantially improved over the previous Nytro, it still seems a bit inconsistent in its groomed trail handling. We will grant that we didn’t have a lot of time with the XTX on groomed trails, so we reserve our final opinion until later.

We will tell you that its rough trail, rutted out, straight ahead mogul handling is exceptionally good. Since that is where the sled is designed to operate, we feel that buyers expecting to pound in the ditches will like it. We tried it and we watched Yamaha ditch pounders ride it over a very deep mogul course at Yamaha’s Midwest research facility. One run through there and we were toast, but the sled kept pounding away as other riders ran the course, lap after lap after lap. The sled handled it. We know the sled is not the lightest model available, but in this handling phase, the combination of centered mass, more upright and forward steering, new chassis ergonomics, lightweight tunnel design and everything else helps the 2009 XTX feel like a much lighter sled. Obviously some of that snocross experience is filtering back to the trail rider.

The 2009 Nytro XTX sets Yamaha on a right course in the rough trail sweepstakes. As every manufacturer knows, one of the fastest growth markets in snowmobiling today is 4strokes. More than 30% of new sled buyers opted for a 4stroke in the past season. You think that might be why Ski-Doo has an all-new 4stroke aimed at the Vector and Nytro market? The other three sled makers aren’t ready to totally concede this quickly growing 4stroke market to Yamaha. The Japanese-based sled manufacturer made a major commitment to 4strokes early in this decade and it is beginning to reap the rewards of that decision. They have the lion’s share of 4stroke sales and won’t give it up without a fight. The 2009 Nytro XTX is a case in point.