Power is good, but more power is better

When I squeeze the right handlebar flap on a Yamaha four-stroke that is boosted by a turbo or blower, I become greedy, wanting more mountains to my name. Call me a one-man corporate raider. Now picture this being you, a mountain pillager.

Yamaha is rolling out an extraordinary power grab, offering a 2012 Nytro MTX 162 that can be equipped with either a Push-built turbocharger, or a Mountain Performance Inc. (MPI) supercharger (also known as a blower). What you need to do is, tie down your fave Yamaha dealer for a moment or two, order a Nytro MTX 162 and for an extra US$1,500, receive a $4,000 turbocharger or blower kit, which the dealer will install (installation costs extra). 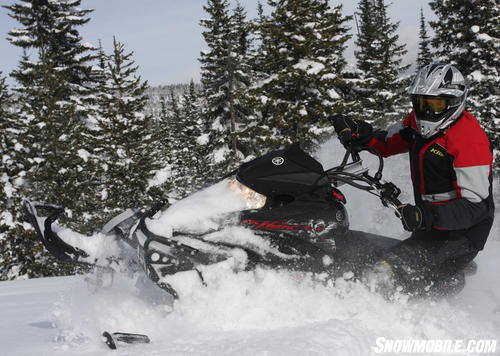 The 2012 Yamaha Nytro benefits greatly from the added horsepower that it receives from Push Turbo that is an upgrade option available through April 18th.

This is a no-second-guess decision. You save $2,500 and receive a Nytro MTX that boils snow. Not to end there, the buyer also receives a custom Klim Aggressive Sled Wear jacket and the option of no interest and payments for six months. 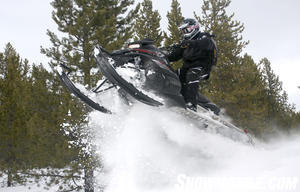 Nytros can get a lot more air with a turbo.

In comparison, if you are looking to purchase a 2012 two-stroke mountain snowmobile, adding a turbo to your mountain stomper will cost you, yes, you guessed it, $4,000. If you forgo the turbo and mount tuned pipes, or pipe, a hot air elimination kit, EFI controller, and a free flowing air intake system, these too, will total up to about $1,500, with no where near the horsepower gain the turbo or blower delivers.

Installation time is dependent on dealer savvy and experience; the Push turbo, can be installed from four to eight hours, and the Mountain Performance Inc. (MPI) blower about eight to 10 hours. With a dealer install, warranty applies.

Here in short are definitions to a turbocharger and supercharger. 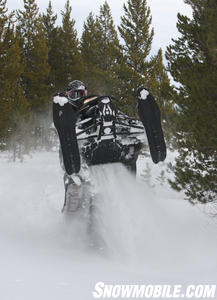 What is a turbo good for if you can’t do a wheelie stand?

Turbocharger – Fast moving exhaust gas drives a turbo unit. A turbo unit has two turbine wheels mounted on shaft, which resides in a housing — one for exhaust, one for the intake. They are linked by a shaft. The exhaust turbine is spun by the engine’s exhaust output. Since it is linked to the intake turbine, the intake turbine pumps more air into the engine (under compression), allowing it to burn more fuel.

The purpose of forced induction systems — superchargers and turbochargers — is to push larger air and fuel mixtures into the combustion chamber. The simplest way to define both is comparing the turbo or blower to an air compressor that is pumping more air into the engine. More air and fuel means more power. 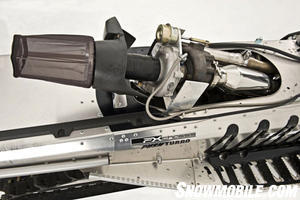 PUSH turbo kits run on premium pump gas and are engineered to be light weight, quick spooling and ultra reliable.

Of huge benefit, a turbo or blower precludes a motor from being affected by elevation, a.k.a, thin air, since “boost” is compressed air that remains constant— as measured in pounds-per-square-inch (PSI). Power loss due to thin air is cancelled out through boost giving you consistent performance at elevation.

The Push turbo or MPI supercharger are not so radical that race gas is needed. These are known as “pump gas” units, where the only fuel needed is premium from your favorite filling station. These are plug and play units where dealer installation is simple.

The Push turbo is a rear-mounted unit with its intake at the same location as the exhaust dump. The tunnel-mounted exhaust system is rerouted to accommodate the intake. Unique to this system, the exhaust pipe dumps above the track with its dump pipe following the tracks forward direction, killing the noise from the short straight pipe. To gather more tech information, go to PushTurbo.com. 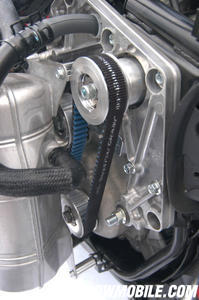 The MPI blower (also known as MPI Stage I) is spun off the crankshaft via a cog belt drive system. It uses stainless steel and aluminum. Plumbing is first rate. To learn more of its technical underpinnings, visit MPI’s website, MountainPerformance.com.

A boosted or blown Nytro is not a pansy-wansy Nytro. These are juiced up powder sleds with big guns in their sleeves. In normal – stock – configuration, a Nytro MTX falls into the 600cc to 700cc two-stroke, class; or in other words, the 130hp to 135-hp segment. Yamaha’s three-cylinder 1050cc four-stroke Genesis motor busts out big muscles when mated to a turbo or blower. Boost is between 7 and 8 pounds per square inch (PSI).

While test riding in West Yellowstone, MT, we spent ample time on two turbo and two blown Nytro MTXs. These were clutched slightly different from each other (turbo to turbo, blower to blower) to address differing elevations. The four amped up mountain sleds were also spinning Yamaha’s new 2.25-inch Ascent paddle track. The aggressive track kept the mountain sleds digging and clawing, receiving the motor’s increased horsepower and torque in fine fashion. Up front, the monster Nytros were steered right and left via Yamaha’s new wide powder ski, the Camoplast MT9. This ski is lighter than the stock Yamaha mountain ski and has greater flotation due to its increased width.

Our impressions are this. The turbo and blown Nytro MTXs increase the motor’s horsepower between 40 and 45 horsepower, thus giving a substantial increase in power-to-weight ratio. The motors, regardless of boost device, showed no lag, hitting the snappy 175 horsepower mark. Through the trees, and when knocking out deep powder maneuvers, the turbo and blower were low and deep in the early revs. Throttle feathering was impressive.

Up near Two Top summit over in Island Park, ID, I was chasing my brother Kevin as I piloted a 2012 Summit X 163 and he a turbo Nytro. At one point, Kevin tore open the Nytro’s throttle bodies as he maneuvered around a tree blowhole leaving a Panama canal-sized trench. As I set up to take a right side route around the trench, my Summit fell into the abyss, lying on its side; I sputtered out from the hole and literally looked down onto the Summit. 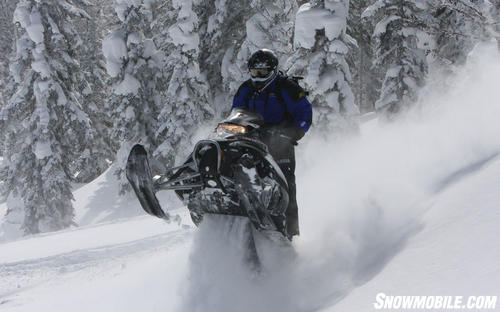 The supercharged Yamaha Nytro feels so much lighter when it’s boosted.

What does this have to do with turbo or blower boost? Thrust. Though the Nytro MTXs – blown or turbo – are simple to maneuver through the trees, being compliant to slow throttle impulses, when terrorist sized power is needed, then bazooka horsepower and torque is delivered to the track by squeezing the right handled trigger.

Understand, this 170 to 175 horsepower is true horsepower from 1,000 feet to 10,000 feet. A motor loses about 3.5-percent of its horsepower for every thousand feet gained in elevation. To understand this, a 160 horsepower two-stroke, as calculated from sea-level air, is a 139 horsepower two-stroke at 6000 feet. A turbo or blown Nytro is 170 to 175 sea-level HP and is also cranking out 170 to 175-hp at 7000 feet and beyond. Non-boosted motors drop more ponies as the snowmobile is pushed to greater heights. Power to weight favors the Nytro MTX. In that regard, any motor, two- or four-stroke, benefits from using a blower or turbocharger.

We all know the Nytro MTX, by nature of using a four-stroke motor, is heavier than its two-stroke counterparts. With boost coming through the blower or turbo, lifting the nose and slicing out the tight turns was simple and sweet. We learned with wrong foot forward, dangly foot outstretched and throttle gently applied, cutting trees and sidehills was a no-brain game. We can say confidently that the Nytro MTX felt as light as a two-stroke 600.

In summation, Yamaha is offering a sweet deal, a high horsepower snowmobile at a minimal price. Hey, this too is a no-brainer decision. The “horsepower deal of the Century” is at your Yamaha dealer.