Yamaha did the expected for 2012. It added electric power steering (EPS) to the Vector, which was already one of the best trail sleds in the sport. Power steering gives it added appeal for ease of operation.

And Yamaha did the unexpected in creating a new Mono Shock II CK rear suspension and upgrading the front suspension to utilize the EPS. Plus, there were a few other tweaks to the Yamaha snowmobile line for 2012.

Any snowmobile enthusiast knew that Yamaha would move its power steering system, which it introduced last year on the Apex, down the model line. Look for EPS on both the 2012 Vector and the 2012 Vector-based Venture GT. We were a bit surprised that Yamaha didn’t make wholesale changes on the Vector — that is, simply move the three-cylinder Genesis four-stroke into the newest Apex chassis and reshape some Apex body work. Guess there was more to it than that. 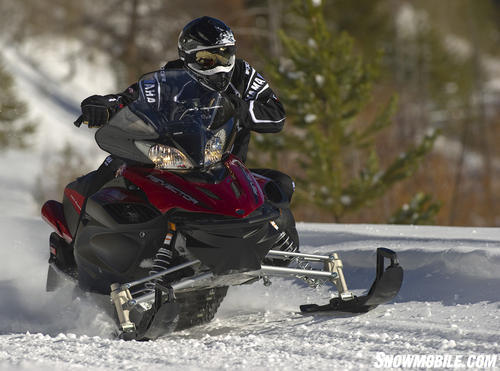 Add power steering to the Vector’s everyday “rideability” and you get one of the best trail rides going.

The front end of the 2012 Vector incorporates a version of the Delta Box steering gate that appeared on the 2011 Apex and is designed to accommodate the needs of electric steering. To that extent the Vector transitioned some of the Apex technology. But from riding a pre-production 2012 Vector, we could ascertain that the seat and its location were old-school Vector and not the two-inch higher seating position of the newest Apex. That’s too bad for us as we enjoy the slightly taller sitting position you get from the Apex.

The advantages of electric power steering are not as dramatic on the Vector as the Apex. The Vector’s steering effort has always felt a bit easier thanks to less mass over the skis. Remember, the Vector engine has one less cylinder than the Apex’ Genesis four-cylinder. The Vector did not get “EXUP” either. The power-smoothing exhaust booster really helps the Apex smooth out its torque load from idle to wide-open throttle. Of course, the larger displacement and lower revving Vector triple is already smooth, a strong asset for everyday trail riding. 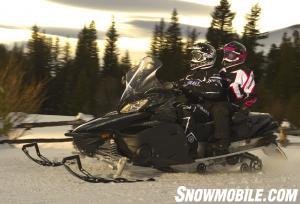 Based on the Vector, the Venture GT blends in ease of power steering to its many pluses.

We are not bemoaning the addition of EPS to the Vector. It was anticipated and seems to be the biggest news for 2012 in the Yamaha camp. Going along with EPS is Yamaha’s third generation double A-arm front suspension, which features revised geometry to increase trail. In addition, the Vector gets a new trail ski that is still to be finalized. The new ski will be utilized in other models as well. Yamaha is one of the most conscientious manufacturers when it comes to design testing, sometimes to a fault.

The Vector offers both a standard length and stretched length rear suspension (the Mono Shock II CK 136) for the Vector LTX model. Both have a clicker shock that replaces the remote adjust shock on last season’s model. Fitted with needle bearings for durability and an adjustable limiter strap, the new suspension is expected to offer an improved ride.

Both new Vectors come with a new windshield to add more wind protection with no increase in drag.

Based on the Vector platform, but fitted for two-up riding, the Venture GT also gets the new power steering and updated front suspension. The ProComfort CK rear suspension remains the same, but reflects ride tuning to match the characteristics of the new front end.

Most other models reflect evolution in tracks or suspension packages, and an assemblage of new color and graphic schemes to separate the new model year from previous ones.

The Phazer models — RTX, big bump play sled, and the groomed trail Phazer GT — are highlighted by replaceable bearing wheels and new styling cues. In essence, one of the sport’s most durable value-sleds just became a bigger value as its durability quotient was raised again. 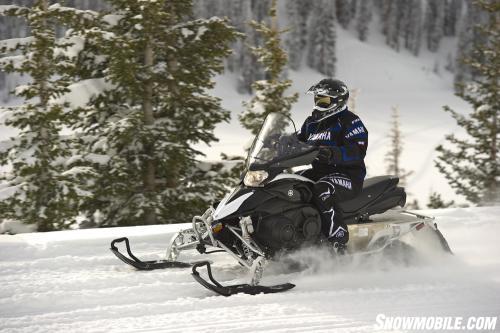 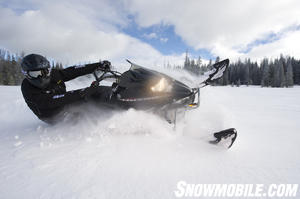 The Nytro 162 takes advantage of new track technologies to float in powder.

The latest seat has a new material that is said to better resist ripping and stretching. A more durable foam material should help the seat retain form and keep it from sagging.

Mountain sleds like the Nytro MTX 162 offer incredible “get out and back reliability” to powder riders. With the addition of a new single-ply Camoplast Ascent track, the steep and deep crowd may find this one-liter four-stroke taking them places they hadn’t expected to visit. The track is claimed to add all-around deep snow performance and is well suited to the extra power coming from a Yamaha-approved turbo or supercharger boost kit.

The MTX will showcase Yamaha’s latest mountain ski, the MT9 design that drops nearly two-pounds from the previous set. The wide based ski should run better flotation as well.

When it comes to unique snowmobiles, there is nothing like the Yamaha Apex, in any of its three iterations — base, SE or XTX. Adding power steering eliminates the feeling of heft from the four-cylinder powerhouse. Of course, bringing EXUP over from Yamaha’s motorcycle side helped create a sled that is potent as soon as you tickle the throttle. One of the most popular Apex models was the fully loaded Apex SE with Float 2 air shocks up front and Fox Mega Float Shock in the rear suspension.

Of course, those who like to bridge the trail bumps and explore off-trail preferred the Apex XTX with its Dual Shock CK 144 rear suspension, which provides the sport of a short track with the snow-ability of a stretch track. With its designed cant to the rail, the XTX provides all around comfort, ride, handling and snow traction. Add in the 40mm gas shock up front and 40mm clicker adjustable rear shock and you have a reason for the sled’s overall popularity. Well, there are the obvious four-stroke advantages of quiet, quick power and famed Yamaha quality. 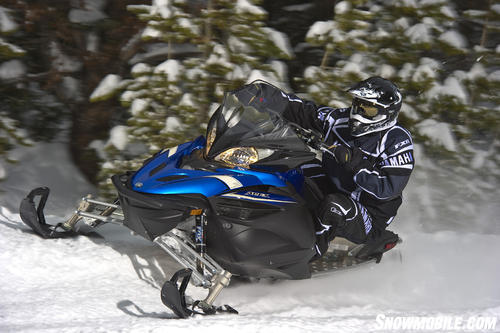 For 2012 you’ll find that Yamaha upped the ante by doubling its offerings of power steering equipped sleds and adding next generation track technologies to its powder and big bump fleet. Let’s not forget that Yamaha also will be celebrating a decade of four-stroke performance, which is starting to catch on big time as more snowmobilers look for ultimate value in their sleds. That value comes when you go to trade a four-stroke Yamaha in for a new one and you discover that premium you thought you might be paying at initial purchase comes back to you at new sled time.