When Yamaha makes changes, it either does it boldly or through evolution. The move to four-strokes came boldly with the turn-of-the-century RX-1, which featured not simply a four-stroke engine, but a four-cylinder four-stroke. It was an exclamation point to Yamaha’s seriousness and commitment to moving away from snowmobiling’s two-stroke comfort zone. With Yamaha firmly entrenched as “The” four-stroke leader, the Japanese-based sled maker brought another innovation with its first full-production run of power steering-equipped trail sleds. This electric power steering (EPS) assembly appeared first on last season’s redone Apex series. Combined with Yamaha’s EXUP exhaust system technology, the EPS-equipped Apex became the “must have” Yamaha performance sled.

Heading into model year 2012, you knew that Yamaha’s EPS would move down the line to the popular Vector models and, possibly, to Yamaha’s two-up cruiser, the Venture. We’re both half right. There is EPS for the Vector series and the top line Venture GT cruiser. The base Venture soldiers on without EPS, without the third generation front suspension and without the fuel-injected Genesis triple cylinder engine. 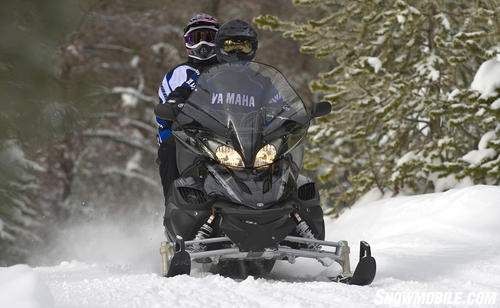 With new EPS for easier steering, the Venture GT becomes an even better two-up cruiser.

In some ways the Venture GT can be viewed as a roomy Vector for two as it shares similar attributes from the integrated bumper back to the tunnel. Of course, that’s a major generalization on our part as the Venture GT gives a much more supple ride and is generally tuned with an emphasis on long ride amenities. If you check out the 2012 Venture GT at a dealer’s showroom, you’ll note the expansive and quite effective windshield, which not only blocks the cold for the driver, but diverts it up and around the passenger as well. 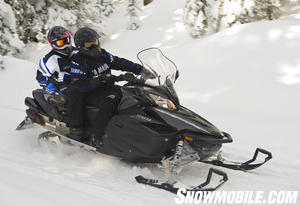 The 2012 Venture GT retains the touring features of previous models, including the rearview mirrors, extra DC outlets to run accessories like a heated visor or GPS, and heated grips for both riders. The driver enjoys the latest in Yamaha handwarmer technology with heating elements that concentrate warmth along the most used areas of the handlebar. There also is Yamaha’s multi-function gauge with easy to read numbers and information output.

As you would expect in a premium touring snowmobile the Venture GT offers plentiful stowage. The main option is a seven-gallon capacity rear trunk with hard cover. You could add an optional rear rack and accessory bags if you needed weekend touring capability. 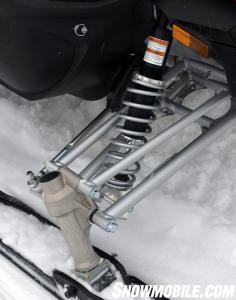 But what really sets the 2012 Yamaha Venture GT apart from the two-up cruiser crowd is the Yamaha-exclusive electric power steering. We really like this variable rate steering system on the four-cylinder Apex, find it almost unnecessary on the lighter nosed triple cylinder Vector, but appreciate it a great deal on the two-up Venture GT. Riding solo, the power steering is nice to have, but when you have a fully loaded sled with a passenger and added gear, that nice to have becomes more “must” have.

As the Vector GT shares front end similarities with the 2012 Vector, that means the Venture GT gets a modified-for-touring version of the third generation double A-front suspension, complete with Yamaha’s latest saddle-type plastic trail ski. Developed specifically to maximize the versatility of the power steering unit, the new ski design features a flatter bottom at the front with further runner setback to relieve darting. In reality, you’d probably not pick up the on-trail darting as much anyway as the power steering reduces that sensation somewhat.

Yamaha’s new front suspension is almost exactly the opposite of Arctic Cat’s ARS (Arctic Race Suspension) in style. Where the ARS looks almost insect-like and spindly, the new Yamaha wishbone design sets the A-arms more closely together. Put the two sleds side to side and you see drastic engineering philosophies at work. Yamaha engineers use high-pressure gas shocks to control the GT’s 8.5-inches of maximum travel, which is actually a half-inch less than with last season’s non-EPS front end. 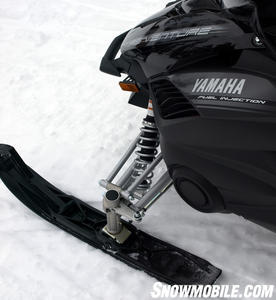 We found the EPS worked exceedingly well on the Venture GT, which most likely will be run at moderate trail speeds where a light steering touch is a plus. When you trip the 41mm fuel injectors on the Genesis triple for more “go-power,” the steering effort is reduced to give you more “trail feel.” But when you need to go lock to lock in a tight section of forest at low speed, the steering is both light and positive. The EPS is a definite advantage for cruising with a passenger. Yamaha may be the first manufacturer to offer the advantages of EPS, but we can think of a couple other cruiser sleds that could use the system more.

In keeping with its plush luxury cruiser engineering, the Venture GT heads into model Year 2012 with a revised ProComfort CK 144 rear suspension that has been tuned to complement the 3rd generation front end and its new geometry. This year’s rear unit features six-spoke carrier wheels with replaceable bearings for simpler maintenance. An easy-to-adjust “clicker” gas shock on the rear arm lets you make adjustments for solo or two-up riding.

Where the front suspension lost a half-inch of useable travel, the rear suspension gains almost an inch, going from 12.4-inches on last season’s GT to 13.3-inches on the 2012 version. 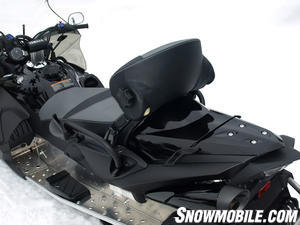 There is a full 7-gallon capacity of rear trunk storage on the 2012 Venture GT.

Both this year’s Venture GT and the Vector house the fuel-injected triple, the Yamaha YVXC drive and the electric power steering within the confines of the latest Delta III front assembly. That means you’ll feel a revised handlebar location. It’s moved a tad up and forward to give you more of a ride-forward effect for quick response to bumps. It also helps to center the mass of the rider’s weight, drivetrain and new EPS pieces. It all works on the 2012 Venture GT, as it is very agile for a 125.4-inch long sled spinning a 144-inch track.

Yamaha keeps the “GT” aspect in this sled as it fits it with a Camoplast Ripsaw track with a moderately aggressive 1.25-inch lug profile instead of a one-inch height. There will be grip from the track to match the aggressive bite of the new EPS-steering.

Is the Yamaha Venture GT the most luxurious cruiser? No. The Ski-Doo Grand Touring still defines plush better. But the Yamaha GT definitely defines sport better than any other two-up cruiser for 2012. It is very much a fun sled to ride with smooth power from its 1049cc triple that comes on steady from idle to wide-open injectors. It has great torque for very smooth drive-offs. And, of course, Yamaha’s Genesis four-stroke triples are as reliable as winter is long, making for superior resale when the time comes to upgrade to the next generation Yamaha.

Adding electric power steering to the 2012 Yamaha Venture GT turns a very good snowmobile cruiser into an exceptional one.