When the RX-1 appeared as Yamaha’s high-performance leader in the 2002 model year, it proved that you could have a fast, reliable four-stroke capable of running with 800cc two-strokes. And you could do it without turbocharging. That first Yamaha Genesis quad borrowed heavily from Yamaha’s asphalt ripping R1 motorcycle. To establish the RX-1 as the four-stroke leader required cooperation from Yamaha snowmobile and motorcycle engineers. 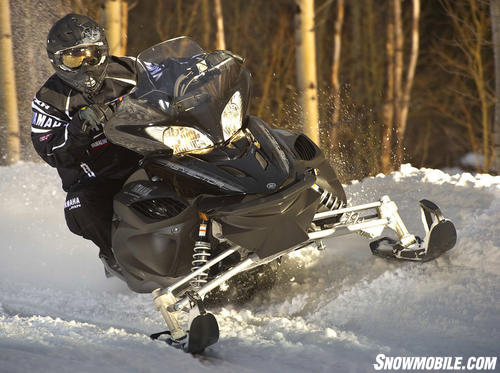 Yamaha’s Vector is one of the most versatile sleds on snow.

A decade after the RX-1, Yamaha no longer features a two-stroke in its recreational snowmobile line up. The RX-1 quad has been upgraded substantially to retain leadership as the high performance Apex. At the introductory level Yamaha created a 500cc twin with similar high-revving characteristics as its quad. In between, there is the soul of Yamaha sleds, the Vector with a fuel-injected triple that steadfastly anchors the heart of the line. 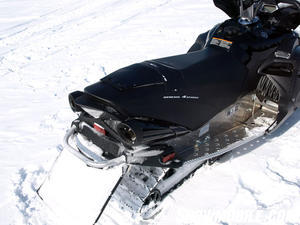 The Vector exhaust exits rearward under the seat.

We admit to being a bit torn between our long-standing admiration for the Vector and the top line Apex, which has garnered updates that make it nearly as versatile as the Vector. We view the Vector as Yamaha’s best all around, every day rider — incredibly reliable, exceptionally smooth on the trail, possessing outstanding low end to mid-range performance that suits the vast majority of snowmobilers. Except for its lower price, the Vector faces a serious challenge from its high-performance sibling. 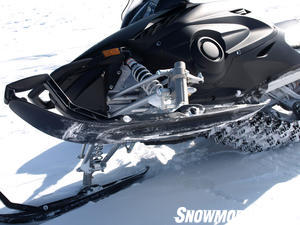 For 2012 Yamaha manages to reinstate some of the Vector’s mid-performance character as the 2012 Vector gains electric power steering, which brings lighter more positive handling and a revised front suspension that mimics the Apex design. Those are advantages for the Vector, but it will cost you more than a thousand bucks versus last year’s Vector GT that came with dual clicker front shocks and a remote adjust rear suspension.

Although the Vector suits the all-around trail rider exceptionally well, we wish that it had gained more of the 2011 Apex upgrades, primarily the raised seat height. Yeah, yeah, it doesn’t sound like a big deal, but the models we test rode this Spring didn’t have the higher positioning. We like the Apex seat for its seeming ability to let the rider move left to right and fore and aft more readily. Maybe the Vector ridership prefers a more stoic riding style.

While we certainly clearly understood the need for EPS (electric power steering) with the Apex, we find it nice, but not essential, to have on the Vector. That, of course, runs against the questions that Yamaha executives got from consumers. The were asked: “Will the Vector get EPS in 2012?” It seemed obvious that it would. 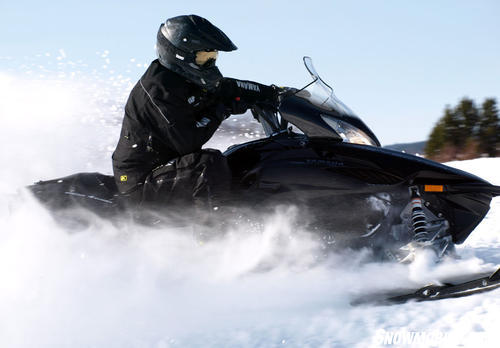 Yamaha’s so-called “mid-performance” triple offers excellent midrange for blasting off and through snow-berms.

The Vector is the ideal candidate for the revised front revision as it simplistically only required refitting the front end to the Vector tunnel. That’s the overly simple non-engineering explanation. And with the new electric power steering framework and steering set, it only made sense to upgrade to the third generation double wishbone front geometry. That allowed Yamaha to fit the 2012 Vector with the latest trail ski, which has enhanced the Apex’ on-trail handling. 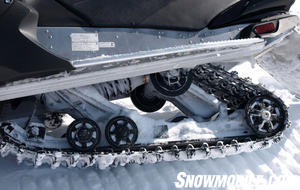 The chassis-mounted dial may be gone, but the next generation MonoShock II rear suspension action remains smooth and controlled.

Actually Yamaha calls its new frontispiece the Deltabox III, whose main objective is to give the rider a comfortable ride-forward position. To that end, the handlebars are set to get the rider in a raised and forward “action” position that effectively centers the rider as a moving element in balancing the sled’s center of gravity and handling. Indeed, the new front suspension works with the new ski design to minimize any annoying ski “pop” — that inside ski lift you encounter sometimes under especially aggressive cornering.

Basically the 2012 is a more moderately powered Apex. Again, simplistically speaking. From the handlebars rearward, the 2012 Vector houses the newest version of Yamaha’s Mono Shock rear suspension — the Mono Shock II CK. This is virtually the same as the previous rear suspension minus the remote adjustment dial. Since most riders set the remote chassis-mounted dial once or twice a season and didn’t change it, this shouldn’t be a stretch as you can set the Mono Shock’s main clicker shock with relative ease. Of course, Yamaha being Yamaha, the suspension set up features replaceable bearing wheels and needle bearings for durability, reliability and so on. Yamaha tends to be nearly anal, but such attention to quality is very good for Yamaha owners and accounts for Yamaha snowmobiles having such good resale value. 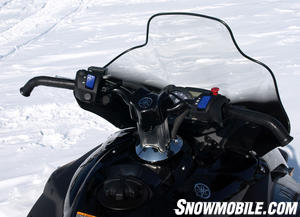 While we’ve noted that we feel that the Apex has gained in versatility compared to the Vector, this 2012 Vector remains one of the best all around sleds you can purchase. The EPS gives it an added dimension of riding ease and comfort that will reward long distance riders. It has been designed to be comfortable under all circumstances as you’ll be able to tuck in behind a very functional and protective windscreen. The hand and thumb warmer setup is unparalleled in modern snowmobiles. You can set them for a quick warm up or tone down the heat as necessary. They are very functional. So is the gauge cluster with its readouts. Of course, we’ll pick a nit or two here, as we’d like some brighter, more colorful feedback so the rider can read the gauge easier. Guess we’re spoiled from test-driving all those new hybrid and electric cars with the “feel good” save-the-environment gauges that plant trees and flowers in the display as you drive eco-friendly. We don’t want that, but in this world of iPads and Androids we could foresee some higher quality screens for us to read.

With a new front suspension, revived rear comfort and more precise steering, we can’t forget what has made the Vector a longtime favorite. The Vector’s 1049cc triple cylinder, four-stroke drive system continues to be a plus. The Apex quad has more top end and vastly improved low speed manners, but the Vector triple with fuel injection continues to be one of the most well rounded designs in snowmobiling. It sounds great with a low but muscular tone. It has superior drive away and strong midrange performance. The fuel injection keeps its crisp response and helps cold weather starting. And, we like the four-stroke’s engine braking, although Yamaha chose to reduce the effect somewhat — as a response to Arctic Cat four-strokes, which have very little and claim it as a marketing advantage? That’s all personal appeal anyway. What is blatantly true is that Yamaha has improved upon an already popular and very solid performer to make its 2012 Yamaha Vector even more of an all around sled that’s nearly perfect for virtually all modern snowmobilers.