When something good remains good, then that is good. Yamaha’s Nytro MTX with a Mountain Performance Inc. turbocharger is a very good, “good” that is in its second year.

For model year 2013, Yamaha continues to offer to the horsepower broker, the “Type-A” personalities, its FX Nytro MTX 162. From model year 2012 (MY12), the Snowmobile.com mountain sled test crew took delivery of a boosted Nytro. It proved to be an interesting snowmobile that never sat idle.

For MY13 Yamaha continues its assisted mountain killer. When a mountain rider pinches the throttle on a turbo-boosted Yamaha four-stroke MTX, excitement builds and adrenaline pumps through the driver’s veins, sending the brain’s synapses into warp 10 overdrive. 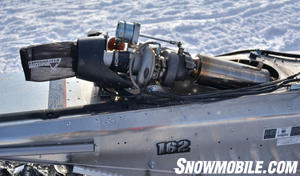 The MPI turbo is a clean unit that tucks under the seat. A proficient Yamaha dealer can install the MPI turbo in under a day.

The turbocharged Yamaha MTX is not a factory-built product, but is a finished product that is finalized at the dealer level. For example, our MY2012 MTX was shipped to Rexburg Motor Sports, Rexburg, ID, as a stock MTX LE 163. The MPI turbo came with the shipment. If a Yamaha dealer installs the turbo, the MTX is warranty-covered. If you or non-dealer performance shop installs the turbo, then the Yamaha warranty is void. Be smart, have the dealer install the afterburner; but know that installation costs do apply.

Again this season, Yamaha offered a special Spring-buy promotion on the MTX with turbo. Given that, walking into your dealer now to order the MTX and turbo kit is a no-can-do. But alert ‘bilers do know that. If you were late in ordering one and still desire one, it is not unusual for Yamaha dealers to order a couple spares to build and have them available for those who made a killing on their Apple stock. 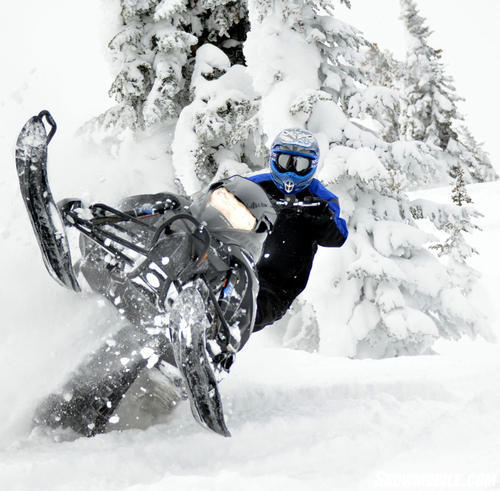 When a driver commits to the FX Nytro MTX with an MPI turbo its Ascent track will launch the vehicle with eagerness.

By definition, a turbocharger uses the motor’s fast moving exhaust gas to spin the turbo unit. The turbo itself is made up of two shaft-mounted turbine wheels that reside in a housing – one for exhaust, one for the intake – and are linked by a shaft. The exhaust turbine is spun by the engine’s exhaust output. Since it is linked to the intake turbine, the intake turbine pumps more air into the engine (under compression), allowing it to burn more fuel. Compressing and stuffing large volumes of air into the motor does not affect it at elevation, that is in thin air. The motor’s 170-ish horsepower remains constant be it at 1,000 feet or 10,000 feet. 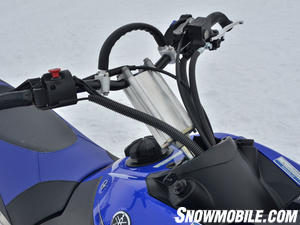 The laydown steering post is a topic of left wing and right-wing snowmobilers alike. We don’t know if laydown is conservative or liberal, but one thing for sure, once mastered, riders like the laydown configuration.

The purpose of a forced induction system is to push larger air and fuel mixtures into the combustion chamber. The simplest way to define both is comparing the turbo or blower to an air compressor that is pumping more air into the engine. More air and fuel means more power.

The MPI boosted motor is not so radical that it needs high-octane race fuel to run. However, you will need to run readily available pump-gas premium fuel.

The MPI turbo is a rear-mounted unit; its intake is at the same location as the exhaust dump. The tunnel mounted exhaust system is rerouted to accommodate the intake. Unique to this system, the exhaust pipe dumps above the track with its dump pipe following the track’s forward direction; this kills the noise from the short straight pipe. 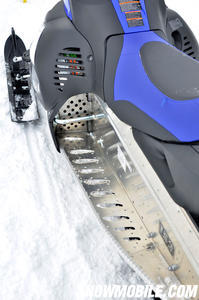 When the MTX came to the public its runningboards were well received. But, by today’s rider’s needs, the boards need larger evac holes to dump snow.

The boosted Nytro MTX is not small-minded Nytro MTX. For most competition purposes, a stock Nytro MTX falls into the 600cc two-stroke class; the 130 H.P. to 135 H.P. segment. Yamaha’s three-cylinder 1050cc four-stroke, electronic fuel-injected Genesis motor busts out big muscles when mated to a turbo or blower, 175-ish. Boost levels, that is pounds per square inch (PSI), are between 7 and 8.

When building a 162 MTX with MPI turbo, Yamaha’s 2.25-inch paddle track, known as Ascent, handles the boost and torque in fine fashion. The standard ski to steer the turbo MTX is Yamaha’s proven powder ski. Yet, Yamaha offers as an optional ski Camoplast’s MT9. This ski is lighter than the stock Yamaha mountain ski and has greater floatation due to its increased width, but it does not have an aggressive keel like the Yamaha powder ski, which is needed for slow deep powder turns. The MT9, though, is great at spreading out the motor’s weight thus keeping the nose afloat on top of the snow.

We all know the Nytro MTX is heavier than its two-stroke counterparts. With increased horsepower coming from a turbo, working the boosted MTX in the powder is simple. Wrong foot forward or with a foot dangling to the side, the MTX turbo is easy to ride.

However, if you read our long-term story on Snowmobile.com’s 2012 mountain sleds, the Nytro does show its age. It needs smoothing and cleaning. Its bodylines, especially at the belly pan area, hang up the chassis when in deep powder. The XM Summit or Pro RMK have fluid lines that allow the chassis to sail over the powder like a schooner sailing on water. Additionally, the steering on the Nytro makes boondocking more work than what we like. The laydown post positions the driver out of sync for proper, ergonomically correct leverage. Lastly, the runningboards hold snow. The platforms need wider evacuation holes that give snow and ice an escape route. 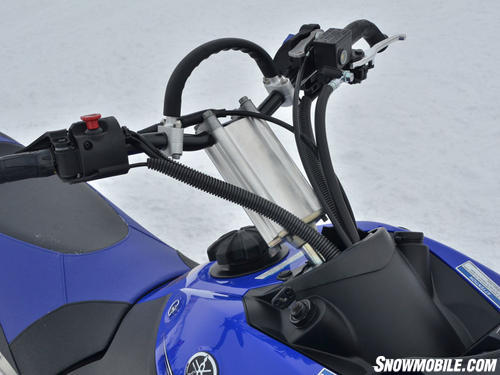 This is best mountain ski on the snow from any manufacturer. Yamaha understands skis and the crucial part this hunk of plastic plays in owner satisfaction.

Over the past several years, we’ve had the opportunity to become familiar with Yamaha’s Nytro MTX. With the addition of a Mountain Performance Inc. turbo, the FX MTX chassis romps to a new level of fun. The MPI turbo is an add-on horsepower builder that fits neatly under the seat. With the turn of the starter key, the Yamaha triple pops to life with a sweet rumble that announces, “Hey, I’m not a stocker.”

The Nytro MTX’s turbocharged motor coupled to the Ascent 2.25-inch-by-162-inch track makes for quite the hill climbing combination. I notice very little turbo lag; this boondocking set up works very well. As always, Yamaha’s fit and finish is a plus that I herald. 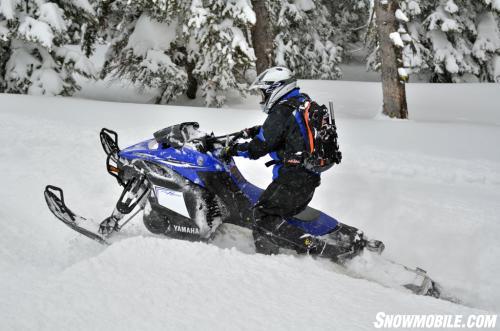 The MTX is a good powder player, but it needs updating with some smoother panels to keep the chassis for hanging up on the snow.

Lastly, I agree on the wish list for the Nytro, and would like to add the sled would benefit from spindles that push the ski slightly ahead, and footrest cut outs (at the foot well) that will allow the driver’s feet to be positioned closer to the motor. Also, the footrest cut outs (think XM Summit) will give the driver the square inches to swing a foot sideways for that needed hillclimbing attack position. Why? I honestly believe “wrong foot forward” is here to stay. It’s a riding style that has caught on.

In closing, we all have our wish lists to improve a mountain snowmobile to do “this” better and “stop doing that,” as mentioned above. Yet and overall, the turbo boost-happy Nytro MTX is a keeper, and is a snowmobile that has no problem laying waste to deep powder.