A simply terrific all-around sled that does everything you need

Let’s not kid ourselves; Yamaha did well with its Arctic Cat-based Viper models. Heading into model year 2015, the company literally heads for the hills with a fleet of Viper M-TX models that feature the same basic one-liter power delivery system as in the trail models, but surrounds it with a Cat designed “M” series platform and suspension set up. As for us low land riders, Yamaha continues evolving its trail models.

If you stop at a Yamaha snowmobile dealership, you’ll discover that the base SR Viper moves more upscale and is now the SR Viper R-TX DX. This past season, we had the original “base” Viper in our small test fleet. We liked it and found that there was nothing basic about it. So, what’s the hoopla for 2015 and the new nomenclature? 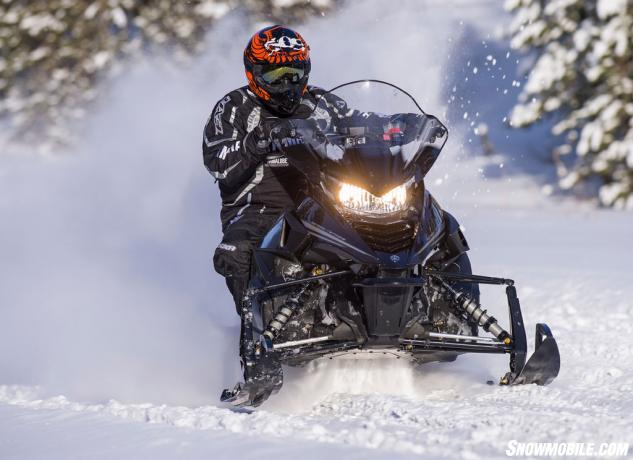 Fitted with easy to live with coil over shocks up front, the 2015 Yamaha R-TX DX is one of the most versatile and sport-loving trail sleds in the business.

Frankly, to our way of thinking, the Viper designation as R-TX DX should have been on the 2014 model. Check it out. Both the 2014 and the similar but renamed 2015 model offer quite a bit of nice-to-have basics. The 2015 DX just ups the game a titch. Both years’ versions provide you with a heated seat, tall wind-defeating windshield, large-enough rear-mounted storage bag and supple suspensions. Actually, Yamaha marketers were in a quandary last season as some felt that the “Deluxe” appellation should have been added to the base vehicle’s designation. Who knows why it didn’t happen, but it does happen for 2015.

Fundamentally all short-tracked Vipers are and have been R-TX models. Perhaps Yamaha felt that the RTX designator on a base Viper model would injure sales of the Nytro RTX, which the Viper supersedes. Whatever, the Viper trail models had to outsell the Nytro hands down.

COMPARISON: Read our review of the 2014 Yamaha SR Viper

Based on our personal experience with the base Viper, we totally expect the 2015 R-TX DX to be more than a worthy successor. Even considering that much remains the same, the 2015 version immediately moves ahead based on the addition of Yamaha’s own Tuner ski. This dual runner ski allows you to customize your settings to limit wander and darting that we found on the base 2014 Viper. Of course, Yamaha only supplies the sled with a basic generic combination of inner and outer runners. You’ll need to purchase any other runners from the dealer to change the stock set up. 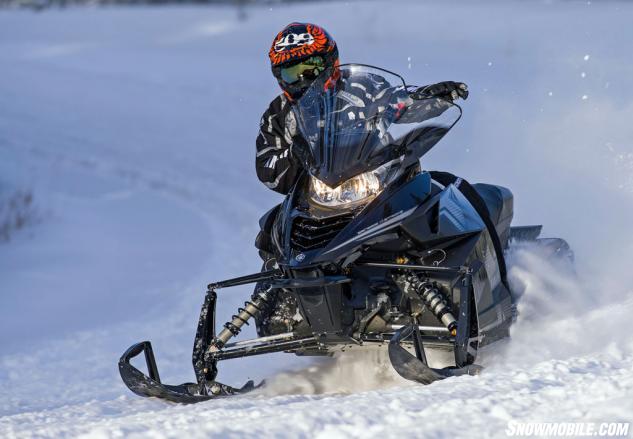 We can report that our rides on various 2015 pre-production Vipers in West Yellowstone tracked well. We also have to state that the Yellowstone snow conditions wouldn’t generate any serious darting episodes anyway – unlike the ones we encountered with the 2014 Viper back in Minnesota a week after we left the test area. We seriously doubt that even Tuner skis would have conquered those conditions of deep-set frozen in-place ski ruts. That’s why we note that the stock Tuner set-up for 2015 Vipers is more of a “best guess” for what Yamaha engineers estimate will be the best all-around compromise. We won’t disagree.

We will agree that the 2015 Viper R-TX DX offers serious, but technically disinterested snowmobilers the best all-around personality for trail riding. This sled invites riding. It features “basic” coil over gas shock front and rear shocks that need minimal ride tuning. Once you set the ride-in sag and deduce a comfort and handling setting for the front double A-arm suspension, you’ll barely need to touch the shock set up again. But you can make adjustments on the trail if need be as Yamaha fits a shock spanner in the tool kit. 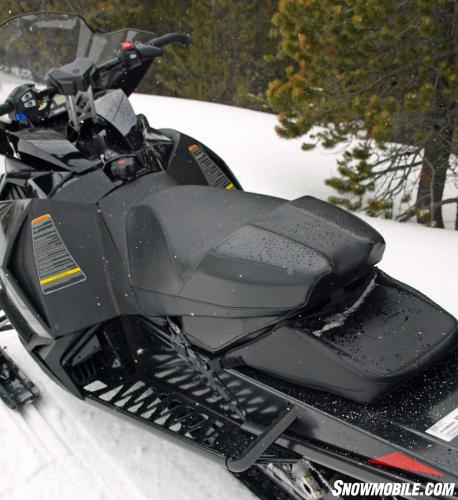 The DX tallish and rounded seat puts you in a good position to react to turns or moguls. Note the more than adequate rear storage bag that’s standard on the DX.

You won’t need to worry about performance either as the Vipers are all fitted with the higher performance version of Yamaha’s nearly bulletproof 1049cc three-cylinder four-stroke. Similar in displacement to the Vector triple, this version offers more performance from different cam settings to up the power a bit and get it to spike a little quicker. The Vector version of the mid-performance Genesis 1049cc has been tuned for broader low end to midrange performance that long haul riders and two-up touring sledders find more appealing. Viper riders want more action and a quicker sensation of power. We find the throttle response and pull to midrange completely adequate with the Viper. Hey, it won’t beat an 800cc two-stroker, but it will hold its own versus an everyday 600cc two-stroke sport sled. And, that’s what Yamaha intended.

As an all-around terrific snowmobile, the 2015 Yamaha Viper R-TX DX scores huge points. This is a sled that is built to be ridden every day. The powertrain of Yamaha triple combined with the Yamaha drive and driven clutching is not simply reliable, but cost efficient. Remember, you only have to add oil (and a filter) before the riding season and then simply keep the 10-gallon fuel tank filled up with 87 octane gas to get maximum enjoyment.

That enjoyment continues to heat up the first time you flip the low-high toggle switch on the standard heated seat. This is the “deluxe” version, remember! And, while your buddies with their racy, low cut windscreens are freezing their noses and frosting their eyeballs, you’re secure sitting behind an unglamorous but highly effective Viper DX windshield. 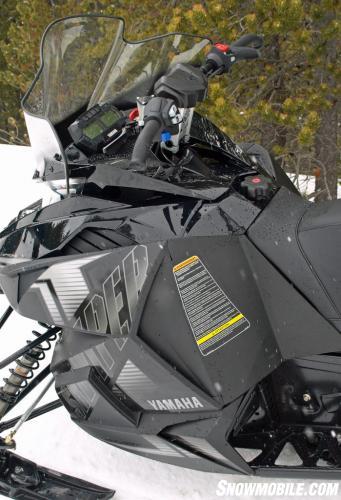 While low and racy sport windscreens look good in the dealership, the taller full width DX windshield makes much more sense and, along with a standard heated seat, offers greater comfort.

Comfort comes in many ways. Yes, there is the heated seat and tall windshield, but also there are 13.5 inches of suspension travel from the SR 129 rear suspension and ergonomic comfort with the tallish but rounded Viper saddle and curved handlebar. Plus, for 2015, the DX adds more outward style with a bright red and white combination or a very stealthy black and silver trim. When looking at the 2015 DX color combinations, maybe the 2014 base Viper was, well, too basic. That won’t be the case with this edition.

Yamaha redefines deluxe with its R-TX DX. Electric start and a push button-actuated mechanical reverse come standard. There’s a very informative digital display that lets you move various output on the display screen. The rear storage bag can hold a spare drive belt – plus, extra tools and a towrope to help your buddies if they get into trouble. Hey, this is still a Yamaha and that drivetrain has been rated as one of the most reliable and durable in the snowmobile business. The only place where we see the Viper falling down a bit comes from the sled’s fit and finish. It seems to be improved for 2015, but remember to set your expectations a bit lower on the “Yamaha-scale.” This sled may be powered by Yamaha, but it is built by Arctic Cat and we couldn’t help but notice the differences between the Yamaha-built and the non-Yamaha built models. For the most part, only long time Yamaha owners would recognize the differences. Long time Cat owners wouldn’t know what we’re talking about. They’d accept the fact that sometimes the grey reverse pushbutton wouldn’t come back out. Or, that some cowling pieces didn’t fit or line up as well as they would on, say, a Yamaha Vector or Apex. 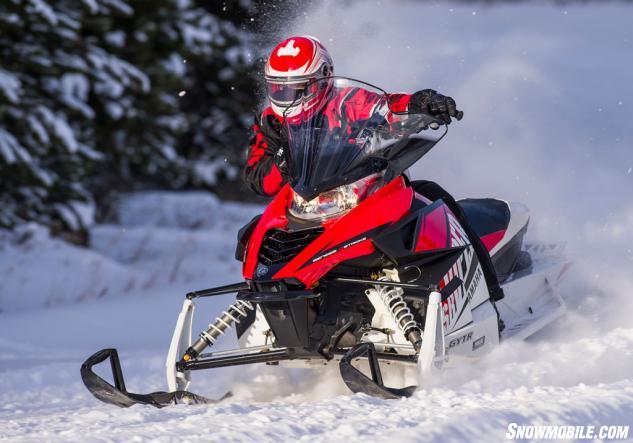 Where the base 2014 Viper was only available in a black and red trim, the 2015 Viper R-TX DX offers a choice of red and white or a stealthy black with silver trim.

All of that aside, we’d much rather have the 2015 Viper R-TX DX than a Nytro. Ah, heck, we’d rather have it over a Vector for that matter. The Viper R-TX DX is simply a terrific all-around sled that can handle off-trail moguls well enough, corners extremely well, sits comfortably and, most importantly, brings a kid-like smile to any serious trail rider. It just does everything you want in a sled.