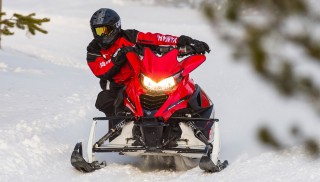 One of the most friendly trail sport sleds for 2016 has to be Yamaha’s Viper R-TX, which Yamaha offered as a limited edition LE earlier in the spring and the current “in-season” SE, a nicely equipped version for less money. Frankly other than a few pieces to stroke your ego, like the Fox Evol shocks and a Performance Damper, the two versions are very similar.

We had the chance to try out the Vipers with the prestige shocks and they do provide more tuning options. No doubt about that. The R-TX LE will have cost about a grand more over the base model R-TX SE at US$13,199. For that early season purchasing decision you got an R-TX with the top line Fox Float 3 Evol RC front shocks and a race suspension with Fox Zero Pro clicker adjustability. And there was the standard equipment Yamaha Performance Damper, which Yamaha is pushing as a new step in chassis stability and consistency. 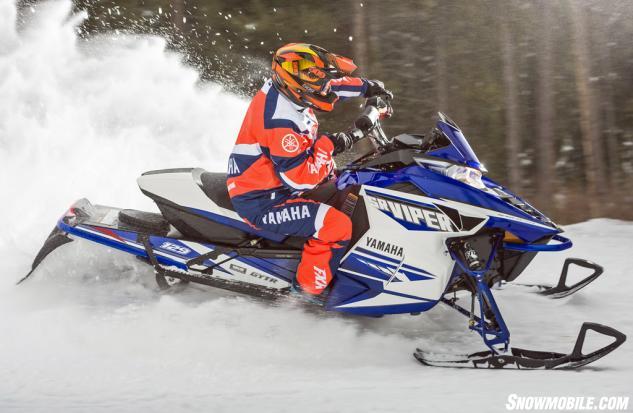 While the pre-season special R-TX LE came with premium Fox EVOL air spring shocks and a Performance Damper, the “base” R-TX SE is a proven handler as well.

If you didn’t jump on the early purchase bandwagon, you’re left with the basic Yamaha Viper R-TX, the SE. And, depending on how your ego is wired, this may be the better all-around choice as an every weekend sport sled. After all, under the hood, like way under the hood and almost dropped out of sight to secure the best center of gravity and handling you can get in a Yamaha trail sport model, both Viper R-TXs are the same.

While the chassis and suspensions roll off the production line in Thief River Falls, home of partner Arctic Cat, the engine and clutching are Yamaha. The engine is a “box” version of the popular 1049cc three-cylinder Yamaha four-stroke that has proven to be incredibly durable and about as bulletproof as you can get. We say “box” since this setup shares its basic electronic fuel injection and exhaust systems with the Yamaha-powered Arctic Cat models. There is no trick multiple engine mode setup for the Vipers. And, instead of letting the exhaust exit under the seat and out the rear of the sled in Yamaha-fashion, the Cat adaptation dumps the exhaust into a suitcase-sized canister to blow downward and out the side by the right ski. 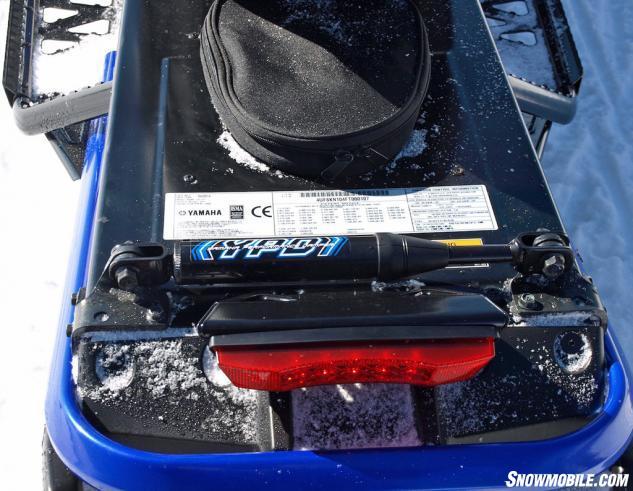 The early-season-only Viper R-TX LE included Yamaha’s Performance Dampers, one at the rear and the other located under the hood.

The EFI may have some tweaks requested by Yamaha, but it was encoded and tuned by Cat engineers. However, the Yamaha four-stroke will give you a familiar Yamaha feel versus a similar Cat model, like the ZR 7000, as the clutching system is pure Yamaha. The RT-X models feature the familiar YVXC drive system with the electronic push button shift for reverse. Of course, this year Arctic Cat uses Team clutching, which makes the drivetrain comparison about a toss-up for performance and long term reliability versus the Yamaha.

We know that the Vipers are exceptionally good on the trails, thanks to the SRV front suspension, a Yamaha tuned version of Cat’s tall spindle ARS. As noted, the LE with its EVOL air shocks should give you more tuning options and will appeal to the suspension setup gurus. Do not underestimate the SE front end’s tuning capabilities. Those base clicker shocks and the coil spring assists can be readily tuned to satisfy the skilled rider. That clicker shock, by the way, is what Yamaha calls the new Fox QS3, which offers easy lever switching between three shock modes: soft, normal and race-like stiff. There isn’t any dumbing down in either of these setups as far was we’re concerned. Do you prefer tweaking air sprung shocks or three-mode clickers? 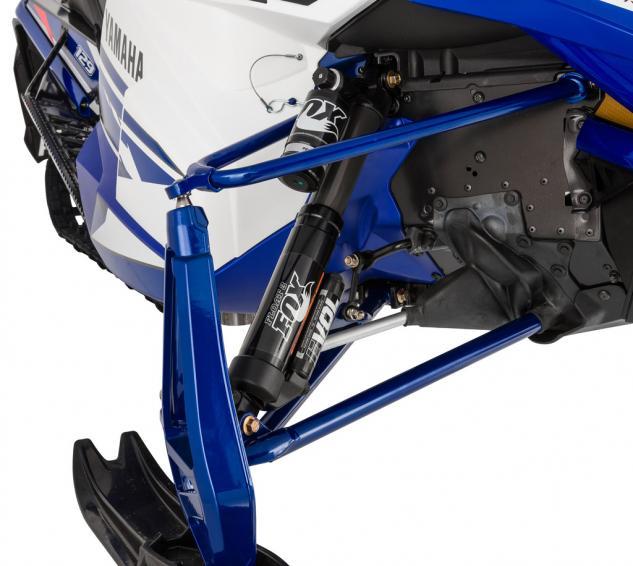 Pre-season buyers of the R-TX LE gained top of the line Fox Float Evol RC shocks that combines the capabilities of the Fox Float 3 with a remote chamber for a wide range of compression and rebound adjustments.

In the rear suspension the SR 129 dual rail design offers a slide-action that helps keep the front end down for ski bite during deceleration or a bit of lift for wide open throttle starts. We would say that the SE definitely offers a more trail ready ride; okay, smooth, a bit softer, perhaps, and composed versus the more aggressive race-action of the LE with its Fox Zero Pro clicker stiffer shock tuning potential. Yamaha refers to the new Fox QS3 three-way adjustable shocks simply as “clickers.” They are much more as the three-way lever-actuated shock modes provides three very different shock ranges from normal, to plush to about as close to full-on racer stiff as you can get.

Yamaha dealers have done well with this Yamaha/Arctic Cat partnership. Why not? The Yamaha drive system is a proven winner that both Yamaha dealers and customers know well. That Cat chassis and suspension package is also a winner and creates immediate trail cred for the Viper brand. It’s a win any way you look at it. Well, maybe not such a big win on the fit and finish, but since that first year of partnership, we’ve seen more and more improvements each season. We figure this partnership has to be a good thing for both parties as Cat gets exposed to some almost maniacal demands on quality and Yamaha learns more about getting product to the snow sooner rather than too late. Regardless of the partnership, the end result is a series of sleds that are incredible fun to ride. With the 129-inch track length, which has been applied by Ski-Doo on select models like the new Blizzard, we get a sled that bridges bumps better, gives us more track bite for hard turn-ins on sweepers, improved straight line stability and, we think, increased sled control for aggressive sport riding. The aggressive Ripsaw II tracks complement the Tuner 3 skis for excellent overall control.

Rider ergonomics are stellar. We really like the ride forward seating on the Vipers and how it places us in the perfect position to grip that excellent curved handlebar. This may be designed by Arctic Cat, but Yamaha core sleds like the Apex and Vector models have a curved bar that is nearly as good. 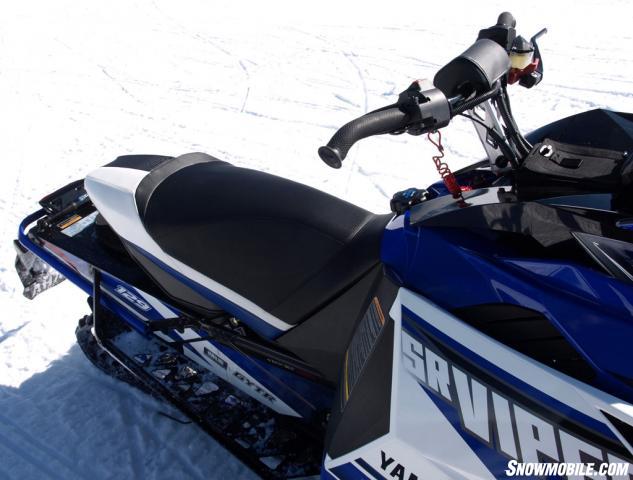 Rider ergonomics are stellar as the ride-forward seating brings you into a natural and comfortable position with the pre-curved handlebar.

Of course, the Viper R-TX is not designed for sedate riding as the low colorful windshield proves. Yes, Yamaha claims that the racer-styled windscreen deflects wind. Okay, it does it better than a racer-style nearly invisible shield and it truly looks great. Still this is not the windscreen you want for kick-back touring on a really cold day. Check out the base windshield on the DX versions. Big, wide. The Viper R-TX is for sport not sedate touring.

Either Viper R-TX, the LE or SE, will provide you with an excellent ride and enough sport to last many winters. Overall, these are hard to beat sleds for serious riders. If you didn’t get in on the early purchase program to get the R-TX LE, don’t sweat it. We think the base Viper R-TX SE may be the better choice for the majority of trail sport riders. 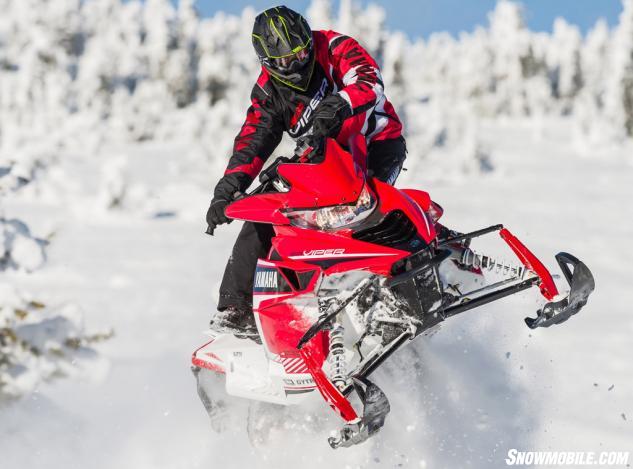 Serious sport riders can get slide-ways with the R-TX SE, available in red or blue, thanks to its high torque engine, Tuner skis and 129-inch long Camoplast Ripsaw II track.
Share
Tweet
Subscribe