Taking snowmobile suspension to the next level

Sharp-eyed consumers got their first glimpse of what would form the basis for the new 2012 ProCross Arctic Race Suspension (ARS) when its predecessor suspension debuted on the 2008 Sno Pro 600 race sled. Not many people paid much attention to the tall spindles and spindly A-arms on that sled since, after all, it was a race-only machine. And, since it was a race-only machine, Cat engineers certainly weren’t volunteering anything other than simply saying that what they learned from that chassis may be applied to future production snowmobiles. But now that the basic design is “public” on the ProCross production machine, the engineers are talking and we’re learning there was a method to Arctic Cat’s madness and the benefits of the design are many. Let’s take a look at the ProCross chassis ARS and its unique design advantages.

First off, increasing the distance between the upper and lower A-arms not only makes for a tall spindle, it reduces the loads in the chassis mounting points. Grab a broomstick and call it your spindle. Hold it out with one hand and have a friend place their hands just above and below yours and try to twist. Now have them place their hands far out on the broomstick and try to twist. It is much harder to twist the broomstick when the person’s hands are placed farther out on the broomstick. The same deal is going on with the Arctic Race Suspension. In fact, the benefits of placing the A-arms farther apart are actually threefold: it results in a stronger suspension, it allows for lighter suspension parts and a lighter chassis structure since they have less work to do and having the pivot points so far apart results in a tighter suspension package since there is less “slop”, or movement of the spindle.

This is the 2012 Sno Pro 500. It uses the same chassis that led to the current ProCross/ProClimb chassis. Compare the basic front suspension layout on this sled to the new sled. 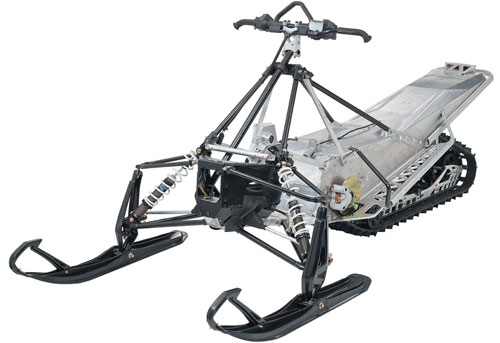 Here is the new ProCross chassis showing how the A-arms were rotated back 30-degrees and how the shock was also tilted back.

The front frame section on the 2008 race sled was designed with one engine package in mind. The front frame section on the ProCross is similar in its design concept to the race sled, but it is more or less scaled up to make room for the 1100, 1100 Turbo and 800 HO engines. On the ProCross, the placement of the upper A-arm near the shock tower was revised mainly to aid packaging for the 1100 Turbo. However, the extra room in the nose section also gives a straight shot for the air intake on the 800 HO. 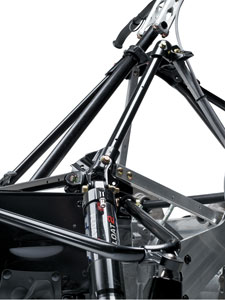 The shock was angled back to help send forces into the chassis instead of simply up into the shock mounts.

Unlike the race sled, which had the suspension arms mounted in a straight line with the centerline of the chassis, the A-arms on the ProCross are mounted at a 30-degree angle to the centerline of the chassis. Basically, how the suspension on the production sled works is almost identical to the race sled, but the suspension arms were rotated back toward the rider roughly nine inches. This allows for a triangulated lower chassis frame that is very rigid. Remember geometry class? The triangle is the most stable geometric shape. An added benefit to the angled A-arm mounts is it feeds chassis inputs (or bumps to you and me) back into the chassis instead of into the suspension pieces, something that allowed Cat engineers to cut even more weight out of the chassis since loads are spread out more evenly.

But it’s not all about bumps, Cat engineers had an eye on the twisty trails too. The ARS suspension arms are mounted at a 4-degree angle where the 2008-2011 race sled had the suspension arms mounted flat (relative to the ground). This is done to improve handling on the new suspension.

It may not get the attention the rest of the suspension receives, but the steering on the ProCross sled is totally revised as well. Mainly, the new suspension geometry allowed for a steering system with fewer parts and/or linkages. Fewer parts mean fewer joints/connections where “slop” can develop in the system. Engineers also designed optimal bump steer into the system, something other manufacturers have been quietly fighting but Cat says they’ve conquered. 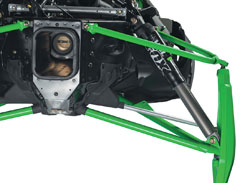 The new layout makes room for the 1100 and 1100 Turbo, but a side benefit is it allows for a straight shot into the airbox for the 800HO. 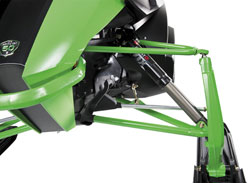 Unlike anything else in the industry, the new suspension looks “trick” and the basic design has already been proven on the racetrack over the past four seasons.

In the snowmobile industry there is no room for error with new product and Arctic Cat has nailed it with its ProCross ARS design. When examining the Arctic Race Suspension it’s clear that not only is it an improvement over the F-series, it’s leapfrogged its way past even the race-only Sno Pro 600, a sled that has won every major race in snowmobiling. Indeed, it is one of the most capable and advanced front suspension designs in the industry.