When it comes to the 50th anniversary litter of Arctic Cats, they showcase excellent breeding. The all-new Procross chassis works exceedingly well whether it fits the shorter tracked “F” models or the stretched out “XF” series. The new XF offers up a longer paw print thanks to the use of a 15-inch wide by 141-inch in circumference track. The sled also measures slightly more than a half-foot longer than the “short track” F1100. Most of that seven-inch difference provides a longer wheelbase for what we consider better on-trail ride as the longer slide rail can bridge bumps more evenly.

While we would definitely prefer the longish XF version with the rambunctious turbocharged four-stroke, we aren’t as adamant when considering the 1056cc non-turbo version of that twin and its 125-horsepower. While we have some opinion about Arctic Cat’s use of the non-turbo 1100 four-stroke as its “600” heading into the 2012 model year, we prefer to reserve final judgment until the snow season gets underway again. 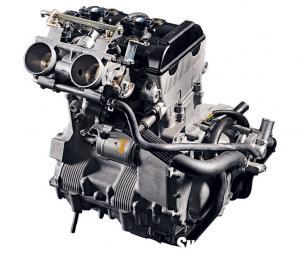 Apparently Cat’s Suzuki-built two-stroke 600 motor has been retired thanks to the current climate of environmental protectionism. Existing EPA regulations are stringent enough to make Arctic Cat blink — along with the other snowmobile makers. The end result is that the familiar Suzuki-built 1056cc big twin will become a more persistent player in the Arctic Cat model line up, at least until Cat engine builders hit the snow with their own design in a year or two. Since Arctic Cat already has proven it can build powerful and reliable four-stroke ATV engines such as the hemi-headed ones seen in the top of the line 1000 and 550 models, we have no reason to believe that Cat engineering can’t transition those capabilities to snowmobiles. In the meantime, the latest Cats will feature the Suzuki four-stroke powerplant in the “600” class.

Arctic Cat’s feeling is that the 1056cc fuel injected twin is quite competitive with the existing array of two-stroke competitors. Since we were at some semblance of altitude at our West Yellowstone test venue, we hesitate to make an all-encompassing call on this. It is our feeling that the Polaris and Ski-Doo two-stroke 600s both “feel” more responsive at initial throttle input than the Arctic Cat 1100 and even the Yamaha Vector four-stroke triple. That’s all subjective. Since both the Arctic Cat and Yamaha four-strokes are incredibly turbine-like in power delivery and exceedingly quiet, it may be that they seem a bit less responsive because the two-strokes ratchet up to their operating revs differently. 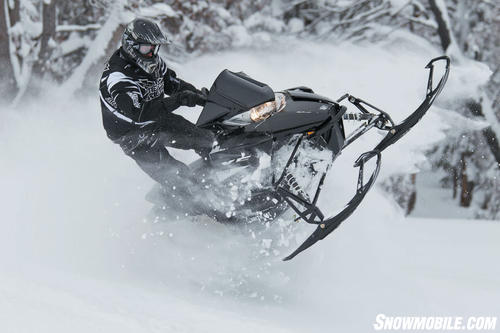 Light in weight and imbued with excellent handling the XF1100 will be a blast on trail or off.

On the trail the Arctic Cat XF1100 was deceptively quick as we would find ourselves carrying much more speed into some turns than we expected. The entire XF1100 LXR package proved very smooth, comfortable and able to get up to speed with less “to-do” than the sporty two-stroke competitors. You definitely want to refer to the digital gauge frequently when riding twisties. In the sweepers the four-stroke twin felt car-like in holding speed and then accelerating smoothly as you eased the throttle in. While the engine seems a bit lazy when compared to a two-stroke when slamming the throttle flipper from a dead stop, we never lacked the ability to keep up or even get ahead of two-stroke riders when test riding. The XF1100 requires a bit of learning to max out its potential. 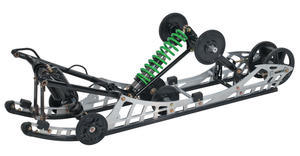 That potential comes from more than the four-stroke twin. This is a light and lively feeling trail sled. It may have a four-stroke powering it, but it sure didn’t feel heavy at all. It rides light and corners better than its older F-series predecessor. The new Procross chassis works incredibly well with the new tall A-arm front suspension and slightly revised slide-action Arctic parallel rail rear suspension. We can’t state enough how impressed we are with the new Procross breed of Cats. 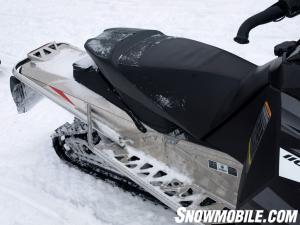 These sleds are fun to ride at any level. They can lumber along at 20 to 30 miles per hour or carry you at full throttle for as long as you dare. The new front suspension steers sharply, reacts predictably and hugs corners. Our first ride on the XF models came early in the morning when the trail was icy and hard, not giving up much grip. We found the XF wanted to push out the front end, which we really don’t like. If anything we want our sleds “loose” and wagging their tails, so the pushing was not to our liking. During later test rides of the same models when the trails had been beaten down, we found grip and handling to our liking. And we had established something of a learning curve with the new Procross models. We chalk up our first ride experiences to the trail conditions and our lack of understanding of how best to put the XF through the corners. Flog ‘em and hold on.

Since a serious motor vehicle accident a year ago March, this writer’s right leg lacks up to 40 percent muscle mass, strength and some quick response capability. That came to the fore when charging hard down a mountain trail and cutting to the inside of a blind turn, which had been badly and deeply rutted out. Already committed to the inside line, the rutted out trail forced the sled to dip and dive sharply left, nearly unseating this rider as the right leg didn’t have the power to grip and adjust to the action. The Procross XF1100 literally saved this writer’s fanny as the sled dipped left, quickly flattened back to level allowing the rider to stay aboard and get the speed down and steering out of harm’s way. As a snowmobiler it would be the norm to say that we were good. But in this case, the sled’s design and capabilities saved our day. 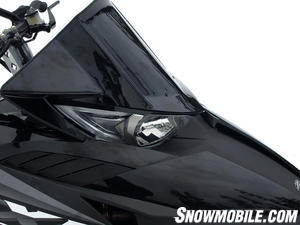 The XF1100’s predictability worked perfectly. The front end’s 10-inches of travel got soaked up and the rear suspension’s 14.5-inches of travel absorbed the rut to control the sled. We discovered that the 1100 twin has enough power and speed to get you going fast enough to know better and that the sled’s balance will work to make you a better rider, in spite of yourself.

The XF1100 LXR represents the new breed of trail sled. That’s the breed with the stretch track for occasional off-trail exploring, but primarily it serves to give you a much better overall ride. The new Arctic Race Suspension (ARS) with the stock Fox Zero Pro shocks and sway bar works well. The FasTrack rear suspension with Fox Zero Pro shocks handles trail chatter and moguls exceedingly well. But it’s the lightweight construction, the effective bell-crank steering, seat ergonomics and rider positioning that make this new sled such a standout. It is amazing what a great job Arctic Cat engineers did in creating this all-new design. This sled marks the 50th anniversary of Arctic Cat snowmobiles and rides as though it draws knowledge from every previous Arctic Cat ever built. For a first year model, the latest XF1100 seems more like an established veteran. 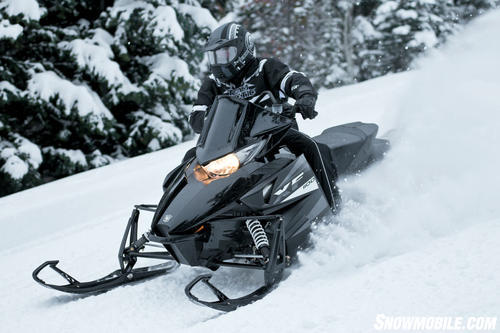