Just three years ago Ski-Doo was sticking to its guns as a company that relied on clean two-strokes to power its snowmobiles. Though it had jumped on the four-stroke bandwagon in 2003 with a V-Twin engine in its Legend snowmobile, the machine was heavy, slow and noisy and Ski-Doo seemed eager to leave the sled to the annals of BRP history. Fast-forward to the 2011 model year — Ski-Doo launches its second new four-stroke engine in the past three years. This time the company has repositioned its aim and, instead of adapting something to work in a snowmobile application, it is designing entirely new four-stroke engines. With the 2011 600 ACE engine the company aims not only to position itself as the builders of the cleanest two-strokes on the market but as the builders of the cleanest four-strokes as well. 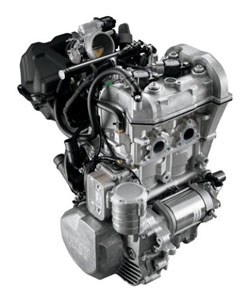 The Rotax 600ACE is a compact, highly efficient two-cylinder four-stroke intended to replace the 550 Fan engine.

The beauty of the Rotax 600 ACE lies in its dual theme of simplicity of design and efficiency. The engine is an inline Twin cylinder liquid-cooled four-stroke that features a slightly oversquare design with a bore of 74mm and stroke of 69.7mm for a total displacement of 600cc. The oversquare design lends itself to torque production while still being able to pull RPM (and pull them quickly) like a snowmobile engine should. It also allows for a compact design, making for a physically small engine and keeping its overall weight at 90-pounds. (By comparison, a 550 fan-cooled engine set up with electric start weighs in at 77-pounds.)

The engine has a forged crank that rides on surprisingly low-tech shell bearings like you’d find in a small block Chevy V8. At 12:1, compression is high, but despite this rather high ratio the engine still calls for only 87 octane. The secret to this is the spherical combustion chamber. While most four-strokes use a flat or wedge-shaped chamber, the spherical chamber (or hemispherical as the design is sometimes called) with a centrally located spark plug lends itself to combustion efficiency, as the piston naturally wants to force the air/fuel charge to the tip of the spark plug.

Four valves per cylinder allow the engine to breathe efficiently. Physics dictates that two small passages will flow better than one large one so, while the valve sizes are small, they actually flow better than if the engine had one large intake and exhaust valve. Very small valve angles (11 degrees and 13 degrees) also lend to the engine’s efficiency by improving flow into the cylinder. The whole setup amounts to 100-percent volumetric efficiency at certain RPM, which translates into huge fuel mileage numbers and ultra-low emissions. 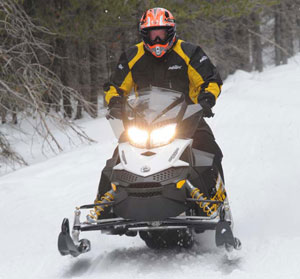 The 60 horsepower the 600 ACE pumps out feels pretty good thanks to the lightweight Ski-Doo REV-XP chassis. It rides nice, has good throttle response and is whisper quiet.

Dual overhead cams perform valve actuation via hydraulic buckets that are DLC (Diamond-Like Carbon) coated to reduce friction and wear. The hydraulic buckets and chain require no adjustment. Interestingly, Rotax opted for a high-lift cam design on the 600 ACE instead of the finger followers used on the 1200. The cams are covered by a lightweight magnesium cover. Stick coils sit directly on the spark plugs and ignite the air/fuel mixture.

The dry sump oiling system and flat bottom design of the engine allow it to be mounted low in the chassis which helps make for a lower center of gravity. Plus, with a dry sump there is less chance for oil starvation if (when) the sled ends up on its side. The oil tank is integrated into the engine and there are three oil pumps, two that scavenge and one high-pressure pump that feeds the bearings. Cast iron cylinder liners that are finished with a unique honing process make for almost zero oil consumption.

The 600 ACE is a model of parts design integration and efficiency. Not only is the oil tank integrated into the engine as stated previously, the oil cooler (utility models) mounts to an aluminum magneto cover, the filter is an inexpensive paper cartridge (also integrated into the mag cover) and components such as the water pump are sized just large enough to accommodate the engine’s needs. The “less is more” efficiency theme also translates over to the intake where a single throttle body is used and the ECM uses a minimal amount of sensors: coolant sensor, oil pressure switch, crank speed sensor and a Tmap sensor in the plenum.

With models that use the 600 ACE the technology surprises don’t stop with the engine. Ski-Doo fit a new eDrive drive clutch, derived directly from BRP’s Can-Am ATVs, to the 600 ACE to further capitalize on its mission of efficiency. It is 3-pounds lighter than a TRA IV clutch and is designed to last longer than the TRA IV and be just as efficient if not more so. Because it’s lighter it spools up quicker giving quicker response and it also takes less power to spool up. While most snowmobile clutches have three cam arms (or ramps in the case of the TRA IV), the eDrive has six ramps. This distributes the load more evenly adding to the durability of the clutch. Heat is an enemy to clutches and Ski-Doo says the eDrive runs cooler than the TRA design. 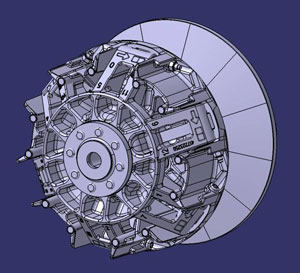 The eDrive clutch looks more complex than it is thanks to a busy-looking cover. While it has twice as many ramps, it’s a simple clutch that’s easy to service.

This cutaway shows the revised ramp/roller design and the layout of the spring. With lightweight and technology such as Vespel rollers the clutch is smooth, efficient and responsive.

The clutch is easy to service and comes apart with three bolts. The six ramps inside are a new design that use Vespel rollers with burnished roller pins. Vespel is a Dupont product that mimics the characteristics of lightweight metals but is much tougher and more efficient, lower friction and more durable. To top it all off Ski-Doo says the clutch runs quieter than a TRA too. 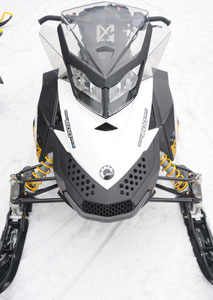 The 600 ACE is right at home tucked under the hood of an MX Z. It’s a great sled for a casual rider looking for a sporty, lightweight trail sled that gets great fuel mileage.

The obvious role of the 600 ACE is as a replacement for the 550 Fan engine. With EPA standards dictating what snowmobile manufacturers can and cannot sell, more and more focus is being paid to phasing out “dirty” (fan-cooled) engines that cost manufacturers points with the EPA. The two engines compare well and, while the 600 ACE weighs more than the 550, its 60 horsepower is slightly higher than the 550, which is in the high 50s. The 600 ACE also trumps the 550 in fuel economy with a projected 30mpg. Also, with its extensive design and technology its service life will be multiple times that of the 550.

While snowmobile enthusiasts tend to focus on the high-horsepower engines, the role of small, clean, reliable, fuel-efficient engines to power rental fleets and provide an avenue for the touring rider or beginner snowmobiler has a huge value in the industry. The 600 ACE should fill the role for Ski-Doo quite well.