Arguably Yamaha’s best trail sled, the Apex SE uses what is perhaps Yamaha’s best rear skid as well, the Mono Shock II (called the Mono Shock II Air on the SE). While the newly-revamped skid is somewhat overshadowed by some of the sled’s other new features such as EXUP and power steering, it would be a mistake to overlook the importance of this suspension in the 2011 Apex SE as well as its significance to the Yamaha snowmobile lineup as a whole. 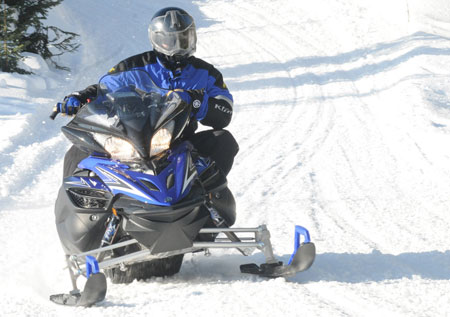 The 2011 Yamaha Apex SE is the first trail sled with an all-air suspension. The ride is one of the best Yamaha has ever produced.

Before we get to the details of the Mono Shock II Air we must first provide some background on the basic skid design as the story behind its birth and development is both significant and interesting. The Mono Shock skid’s production debut was in the 2005 RX-1, but the skid was in the works at Yamaha and even in front of the consumer’s eye long before that in Yamaha’s snocross race sleds. In the late 1990s, Yamaha race sleds used an early version of the skid that featured one giant Ohlins shock tucked up inside the tunnel. At the time, it looked like nothing anyone had ever seen before.

Masao Furusawa first patented the Mono Shock design in 1999. This drawing is from the original patent filing.

In the mid-1990s, Masao Furusawa, then Yamaha’s General Snowmobile Engineering Manager and designer of the Pro Action skid, took his work with that suspension and developed an idea for a revised long-stroke skid that used a single shock. He brought the idea to the suspension designers who developed linkage to make it work allowing the front arm and rear arm to actuate the same shock. The Yamaha race team embraced the lightweight, long-stroke skid for snocross racing and proved its worth by winning snocross races on a National level. When Yamaha’s interest in snocross began to taper off in the early 2000s, the company almost shelved the design, but engineers inside Yamaha, including Furusawa, kept working on it for a trail application and eventually it was ready to bring to market.

The revised design that eventually made it to production kept the lightweight of the race skid and also offered the consumer a lot of adjustability. The original Mono Shock RA skid debuted in the RX-1 in 2005 and exhibited superb trail manners and a smooth ride at moderately fast trail speeds. In later years YPAD, Yamaha’s parts and accessories department, provided heavier springs for the skid to further increase the range of use for the skid. If the Mono Shock has an Achilles heel it is that it bottoms on its links where most skids bottom on the rails. But it’s typically not a problem outside of racing applications.

The 2011 Apex SE’s all-air suspension comes thanks to Fox Racing Shox FLOAT II shocks on the front suspension and, more importantly, the new Fox FLOAT Mega shock in the Mono Shock II Air skid. The FLOAT Mega not only rounds out the plush ride on the sled, it is the largest FLOAT shock Fox makes and it may just be the largest shock found on any snowmobile. It features twice the air volume of the FLOAT shocks used on the front suspension of the Apex SE.

The 2011 version of the Mono Shock skid is the pinnacle of its design. The skid’s five-plus year lifespan in a consumer application is proof of its viability.

A “normal” FLOAT air shock will exhibit an initial stiffness at the beginning of the stroke causing a spike in the initial “spring” rate of the shock. It’s something Fox refers to as “sticktion.” The company recognized this and designed a negative spring that assists the shock at the beginning of its stroke preventing sticktion and making for a more compliant ride. Fox refers to shocks with this feature as FLOAT 2. Like the FLOAT 2 shocks found in front, the FLOAT Mega also features a negative spring to soften the initial shock stroke in the Mono Shock II Air. 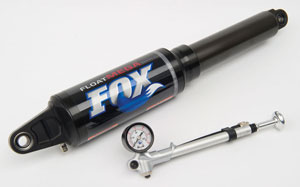 The Fox FLOAT Mega shock is the secret to the Mono Shock II Air’s superiority over all other versions of the Mono Shock design. With it, the skid retains all its ride quality and adjustability while correcting its tendency to bottom out.

Like all FLOAT shocks, the FLOAT Mega is preload adjustable via use of a small air pump and the more air pressure it has, the stiffer it gets. A FLOAT air shock features a “spring rate” that rises sharply as the shock is compressed because the air inside will only compress to a certain point. This spring rate and resistance to bottoming solves the problem of the skid’s falling rate design in that it is nearly impossible to bottom out when set up properly. The Mono Shock skid is a slightly falling rate design and, like any falling rate suspension, will get softer as it moves through its travel. This sort of suspension generally provides a plush trail ride as the suspension strokes easily through its travel but isn’t necessarily suited for performance use.

With the FLOAT Mega fitted in the Mono Shock II it effectively changes the skid to a rising rate. In a nutshell, the FLOAT Mega retains the compliant ride of the original Mono Shock while correcting the suspension’s tendency to bottom when hitting low-speed G-out bumps. At the same time it adds almost infinite adjustability without the knobs and mechanical or electronic setups of its predecessors and it’s lighter than a conventional shock/spring combo.

In 2010 Yamaha took what it learned from the original Mono Shock RA to further improve the Mono Shock II. That year the skid featured no less than 13 changes, including a larger rear axle, needle bearings in the lower front arm, replaceable bearing wheels, a track adjuster and stronger rails. 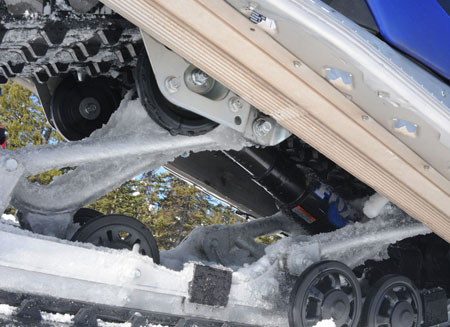 The Mono Shock II Air tucks the giant Fox FLOAT Mega up into the tunnel. You’ll have to make your friends get down on their knees to check it out.

For 2011 the Mono Shock II Air features a new rail design to accept a 128-inch track. From our experience the Deltabox-chassis Yamaha snowmobiles seem to ride better with a longer track. The 128-inch track strikes a balance between the more nimble 121-inch skid from previous years and the longer 136-inch skid. This, combined with the compliant ride, adjustability and race- and consumer-proven performance of the Mono Shock skid make the 2011 Yamaha Apex SE one sweet-riding sled.