Two suspensions that represent inside and outside the skid frame thinking

The two most talked about snowmobile rear suspension systems are Ski-Doo’s rMotion and Polaris’ Pro-Ride. But which is better? Or, is it that simple? To help you understand which ride you want, we take an inside look at these two high tech suspensions from Polaris and BRP/Ski-Doo and cover their development, how they work and how these top two skids compare. 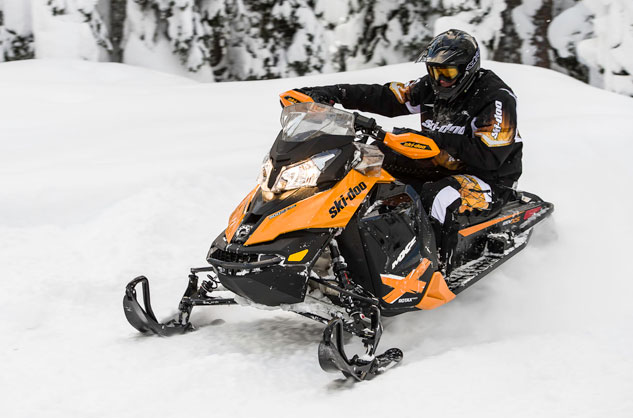 Ski-Doo’s rMotion includes tune-ability to satisfy novices as well as throttle to the bar experts.

The rMotion is a progressive rate suspension with 13 percent more travel than the previous SC-5 suspension. Looking at the rMotion rear suspension, it has the appearance of earlier BRP/Ski-Doo skids. But through refinement the BRP/Ski-Doo engineers have worked hard on getting the maximum travel with the most efficient geometry. Today Ski-Doo is pushing this rear skid as one of its top features across the 2014 product line.

How Does the rMotion Rear Suspension Work?

The rMotion skid offers 10.7 inches of travel at the bump stop. It uses spring tension to eat up the light stutter bumps with its gas-charged shocks taking over for the larger hits. The rear shock has a unique feature with the high speed and low speed compression settings tied together.

The rMotion with Quick Adjust places accessible adjustment knobs on the runningboards.

The Quick Adjust version also has the spring preload adjuster on the left side of the running board. Spring adjustment is controlled hydraulically, which gives more range of adjustments over the Standard version. The spring range covers from a lightweight rider up to a heavier rider and even the addition of a passenger – all with the same springs. Several adjustments can be made to this rear skid to improve the range capability. We’ve heard some complaints about the Quick Adjust system taking up some real estate on the runningboards and being in the way of the rider’s feet. 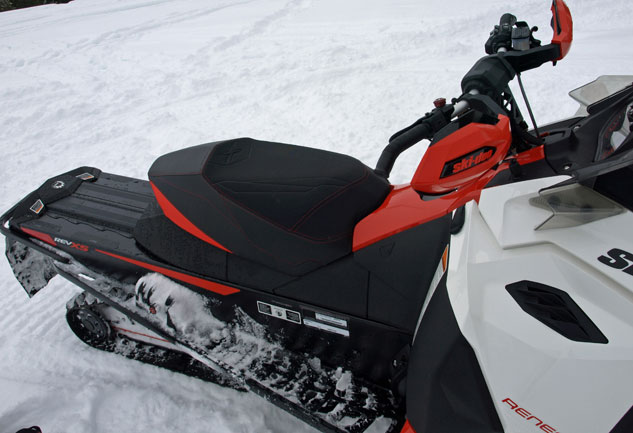 There have been some complaints that the Quick Adjust system takes up real estate on the runningboards and gets in the way of the rider’s feet.

We tested an MXZ X with the SC-5 setup and another sled with rMotion back-to-back for a comparison. We started our test ride with soft settings on both the spring tension and compression settings. The soft settings were really soft. I noticed that although the new MXZ X did not steer as well as previous MXZs, it was still enjoyable to ride. At our first stop, we stiffened the spring adjustment to my weight and took the compression setting from #2 to #6. This improved the steering and the ride. It was incredibly plush for an MXZ X and I could feel the rear suspension going through its travel when I hit big bumps. 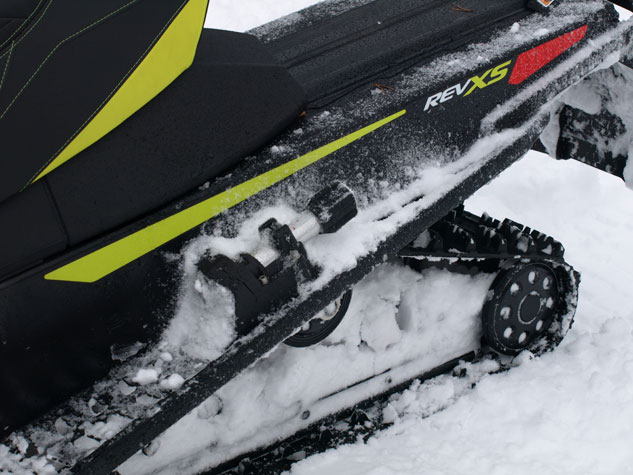 The rMotion can be quickly and easily tuned and proved to work well in the small and medium bumps while getting progressively stiffer as you go into harsher bumps, where you one can feel the range of travel in this rear skid.

We switched sleds after the next stop. While the SC-5 suspension is a good suspension and works well, it’s stiff and hard to get a full range of travel when compared to the rMotion. Next stop, I was back on the rMotion sled, this time I took the compression setting from #6 to #10, which made the suspension work and react more like SC-5 sled. Then we tried changing the compression settings again, this time from #10 to #15. Now the rear suspension was really stiff and the only movement I noticed was in the seat foam.

This compression setting goes up to #22, but I don’t see the need for me to go beyond #15. During this test, it didn’t matter what the settings were, the sled was forgiving and always provided a good ride. I did notice that this suspension does work well in the small and medium bumps and at the same time it did get progressively stiffer as I went into harsher bumps – I could actually feel the range of travel in this rear skid. I’m not sure what the “r” stands for, but it may stand for: real, radical, range. 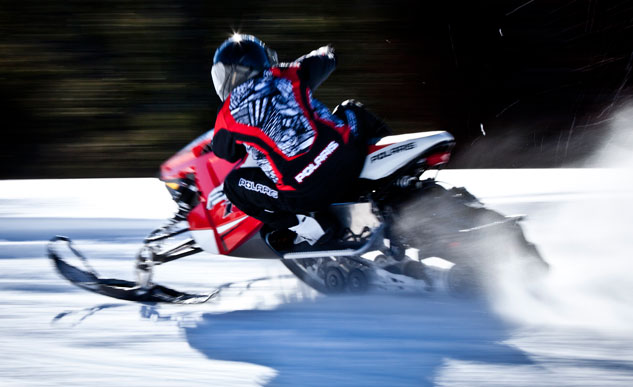 The Polaris Rush Pro-R series is directed at experienced riders who are looking for active feedback.

It was five years ago, but I can remember it like it was yesterday when Polaris brought the snowmobile media to Daniel’s Summit, Utah in the Rockies. This is where Polaris pulled the covers off its new Rush line. Those were exciting times as this new product release also included an awesome test ride.

We all had lots of seat time and a chance to form some opinions on this new sled with this radical new rear suspension with suspension parts and the spring outside and on top of the skid. I had the pleasure to ride with one of the Pro-Ride design engineers who had the rear spring adjustment tool on hand. As we rode together during this test, he was able to explain the different settings as we rode and when we stopped every 5-10 minutes for another adjustment. 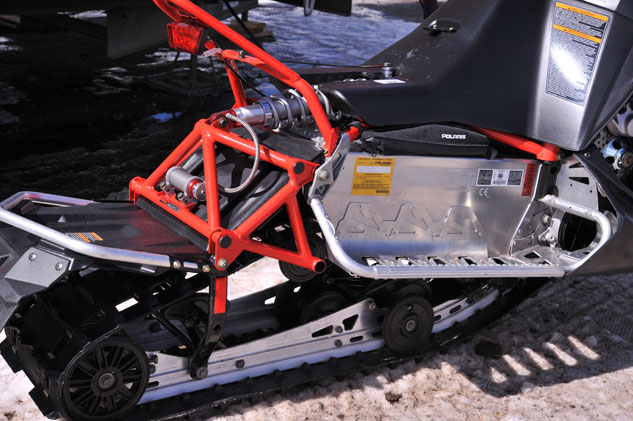 Introduced five years ago in Utah at Daniels Summit, Polaris’ ProRide rear suspension really stood out for its soft settings.

It was truly amazing to feel the range that this new Pro-Ride rear suspension had. One thing that really stood out was the soft settings. I could really feel the full range of this long suspension travel and it felt soft. But while this buggy was set on soft it was hard to steer and there was a real tendency to push in the corners. On the other end of this spectrum, the harder settings made the suspension travel stiff, but on these settings this sled railed corners better than any production sled ever and this was even with the throttle on. This positive steering was incredible, so finding a balance between the soft and hard settings was the way to go. During these early stages of the Pro-Ride rear skid, everyone talked about ski lift and today this comment still comes out now again. Does this skid work?  Absolutely! . How Does the Updated Pro-Ride Work? 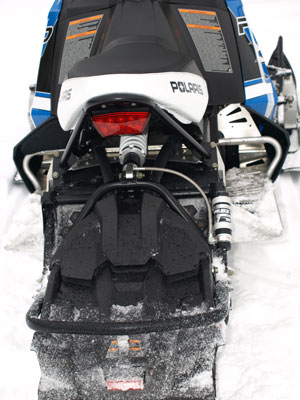 Polaris engineers have made refinements to its Pro-Ride such as raising the front torque arm mounting points by a half inch.

Since that first version, Polaris engineers have been busy making some refinements. These changes made a positive difference on the Pro-Ride Progressive Rate Rear Suspension. For example, on the 2012 Pro-Ride rear suspension, Polaris raised the front torque arm mounting points by a half inch (or 13mm). This small geometry change made the sled handle better in corning with less ski lift and flatter cornering. The change also made it easier to find the right balance of ski pressure and weight transfer when compared to its earlier version. This latest skid has a better weight transfer, even when the rider throttles up and it has a more positive feel.

Like the rMotion skid, the Pro-Ride rear suspension has also made its appearance on the longer chassis of Polaris’ Switchback model line. The Switchback features a 136-inch track and yet it is still easy to maneuver through the tight stuff both on and off trail. When looking at the longer profile of a Switchback, the appearance of Pro-Ride rear suspension looks like it belongs. And yes, this longer Pro-Ride version is flawless and preformed well during our testing.

The Rush Pro-R series is directed at experienced riders who are looking for active feedback. In other words, the rider needs to move around on the seat to get the maximum control. The Pro-Ride rear suspension is uncoupled, meaning the front and rear arms are independent. To get the maximum out of this suspension setup, the rider must sit back in the seat for maximum acceleration and move forward and lean-in for the corners. This rider positioning is standard for all sleds, but it’s really important to do this on the Rush in order to get this machine to work the way it was meant to work.

The Pro-Ride rear suspension does look radically different. Whenever there is a group that talks about the Pro-Ride rear skid, there is always a comment about its appearance, but this radical looking skid works best for those who want active control. 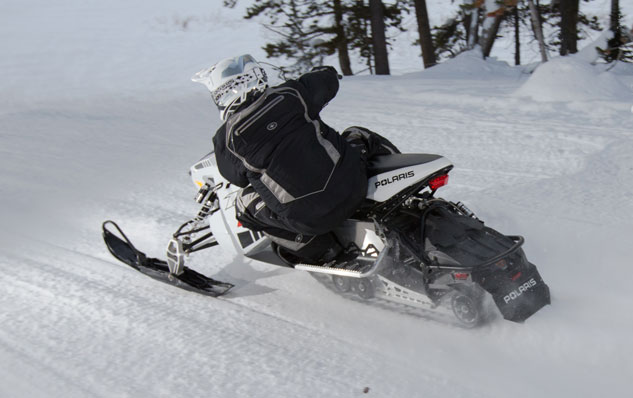 Like the rMotion skid, the Pro-Ride rear suspension is no longer a Rush only skid, but now appears on the longer chassis Switchback model line.

Both of these skids are progressive rate suspensions, but they are completely different in every way. The Pro-Ride rear suspension does not have the years of development history as the rMotion. In other words, it doesn’t have the generation transitions as the rMotion. But the Pro-Ride really works well for the experienced rider who wants active feedback and control. On the other hand, the rMotion has more range to satisfy the novice all the way to the experienced rider who is demanding the best. The rMotion also comes with a higher price tag. But, the end result is that you can’t go wrong with either of these two awesome suspensions.