Standing Out on the Trail

Riding safely at night means seeing and being seen

The 3M Company wanted to prove a point. Our minivan slowly turned a corner on the Minnesota company’s 2.5-mile paved test track. Its headlights poured out their full distance into the black of night. Distance markers provided scale as we peered into the void ahead of the headlights. We were searching for people in the road wearing reflective snow gear. At distances ranging from 1,700 to 750 feet we could begin to pick out movements of people moving. Depending on the amount and placement of reflective materials on the apparel, we could pick out the people, either more readily or not.

The point was that reflective-equipped apparel gives a snowmobiler or action-sport enthusiast an edge. Make no mistake; unless you’re a covert operative up to no good, you want to be seen. You especially want to be seen at night. 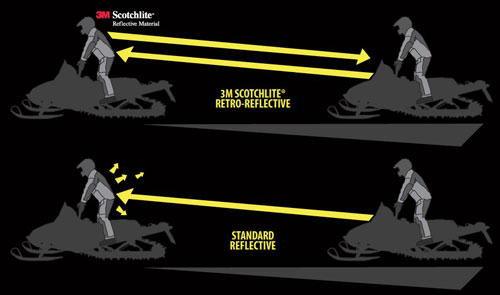 3M Company’s reflective materials are regarded as the “gold standard” due to the quality and reflective capacity as illustrated here.

3M’s point was made. As innovators of the world’s top reflective materials, in this case Scotchlite brand material, the company works closely with many suppliers of action apparel. Top brand companies and 3M work together to embellish their apparel with the added safety enhancements of this product.

While the 3M brand is recognized as the “gold” standard of such products, this innovative multi-national company with nearly 90,000 employees worldwide refuses to rest on the successes of its base products. Indeed, 3M sets the standard because it constantly researches new ways to incorporate its reflective products into more activities, including snowmobiling. The gear we were trying to pick out of the darkness was old and new KLIM technical riding gear, all with varying amounts of 3M Scotchlite reflective materials in the detailing. 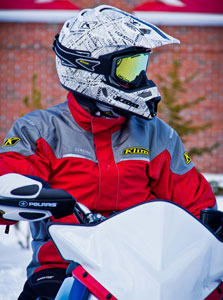 As a snowmobiler, bicyclist and an injured motorcyclist, this writer knows the value of being seen. In daytime conditions we’d conclude that bright colors and warning lights should be enough to advise automobile drivers that we’re sharing the road with them. Should be isn’t reality as my totaled-out motorcycle and badly mangled and now rebuilt right leg, ankle, and foot can attest. We have to be aggressively seen, and still remain ready to avoid accidents. But, so what, you say. That’s daylight and bikes and motorcycles offer up a narrow hard-to-see profile. Perhaps, but when we ride sleds, how often do we make road crossings, enter gas station aprons for refueling or ride alongside the highway next to speeding cars? 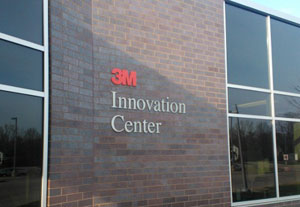 Being seen is crucial. And since 3M works its high visibility product to appeal to action sports apparel manufacturers, we can choose to be aggressively seen. We have noticed more and more bicyclists and motorcyclists wearing reflective safety vests during their daytime rides. Of course, 3M has a line of worker safety gear that includes high visibility vests, rain gear, shirts and sweats, but we don’t need – or want – to look as though we should be moving highway cones. That’s where companies like KLIM come into the picture. And that’s why we were traveling at night in 3M minivans on the company’s Visibility Demonstration Course, located about 11 miles south of 3M’s world headquarters in Maplewood, Minn.

Think of this demonstration center as an outdoor laboratory. Just off a major north-south US highway, most drivers speeding by would have zero concept of what goes on within the fenced in confines of the facility’s 1,750 acres. The operation consists of 35 different buildings that include various production facilities serving six 3M divisions and its own Minnesota Pollution Control Agency certified wastewater treatment plant and on-site incinerator to contain industrial waste. Among the lab experiments are demonstrations of new and current products, such as the add-on reflective materials being used in KLIM gear. 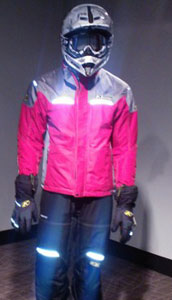 You can appreciate how reflective materials stand out when hit by a camera’s flash or a sled’s headlight.

Why do 3M reflective materials matter for an add-on to gear? First of all, the 3M brand has a 93 percent recognition factor with general consumers. A total of 92 percent of surveyed respondents felt that reflective materials add safety. Motorsports enthusiasts indicated a high likelihood to both use and be willing to pay more for reflective gear.

But 3M wearable reflective materials aren’t simply bright add-ons; they are fully researched within a history that includes products used by US astronauts for lunar exploration and other space-age achievements. The high reflectivity of the materials results in its being seen when a sled or car’s headlight hits the product. Through extensive research 3M learned how the human eye and brain perceive and respond to the material’s reflections. Through this and an understanding of “biomotion” and its perception helped the company to maximize its product usefulness. That’s why you may notice that more and more high visibility apparel for roadside and airport workers feature rings around a sleeve or pant leg instead of full-length stripes or piping. Such shapes and biomotion allows the brain to pick out the wearer and recognize him more readily as a human shape.

This was another part of the minivan tour. 3M had worked with KLIM, which utilized reflective materials in past garments, to show how placement and material patterns could make the KLIM gear more visible. Instead of simple piping, the use of strategically placed but bigger panels of reflective materials could have a bigger input on safety for nighttime snowmobiling.

Think for a moment of what happens when you stop alongside the trail at night. You may not leave your sled running, which means you may or not have front and rear lights on to warn oncoming riders. If you are stopped for repairs and have to turn off the engine, you’ve gone dark and will be hard for approaching riders to see. If you are under the hood changing a drive belt, you will be near invisible to pick up unless you have something reflective for an oncoming headlight to pick up. 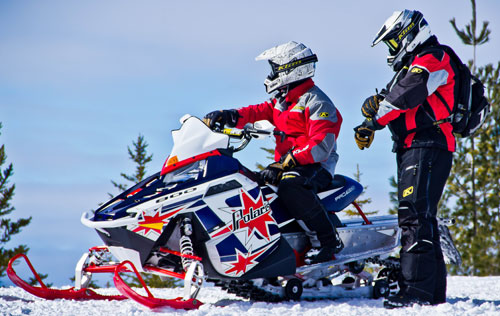 That was the purpose of our nighttime minivan runs. To experience picking out shapes in the night. It wasn’t always easy, and we knew what and where to look. At night on a darkened trail aboard a sled traveling plus-50 miles per hour, you’re reactions will be tainted by your degree of awareness, which could be compromised by cold and fatigue. If you are the snowmobiler stopped alongside the trail at night, you want every advantage. One of those advantages comes with 3M Scotchlite Reflective Materials being integrated as a design element into your snow gear.