Why OEMs Make Their Own Two-Stroke Snowmobile Oil 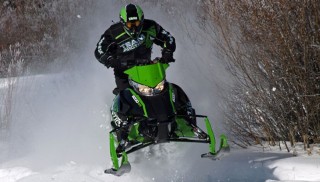 The most basic job of two-stroke engine oil is to prevent wear in the cylinder. Two-stroke oil must also mix with fuel, keep engine internals clean and free of carbon and perform numerous other critical functions depending on application.

Before 2006 these oil duties were pretty straightforward. Today, however, oil’s job has been made more challenging with groundbreaking technologies such as E-TEC direct injection, C-TEC2 injection and Cleanfire injection. While all of these different systems provide the same end result – a clean, EPA-compliant two-stroke engine – none of them work the same to get those results. One thing they do share is the unique demand they put on the engine’s oiling requirements. So, if they are all engineered differently how do you blend oil for one of these high-tech engines, no less all three? That’s a good question, and that’s why the manufacturers turn to custom oil blenders to develop oil that works with their particular technology.

What’s In The Formula?

Two-stroke oil may look like one homogeneous fluid, but it’s actually made up of a number of different components. Oil base stock makes up the majority of any two-stroke snowmobile oil – about 25-35 (and in some cases up to 40) percent – and the base stock determines what type of oil it is – Mineral, Semi-Synthetic or Synthetic. Mineral oils such as Group I and II are products of the petroleum distillation process. There are two types of synthetics used in two-stroke engine oils, one made from highly refined Group III base stocks while Group IV synthetics are Polyalphaolefins (PAO) and are constructed through a chemical process. Generally, a semi-synthetic is a blend of mineral base stock with no more than 30 percent of synthetic base stock and, while semi-synthetic oils can be good, they can also be deceiving since there’s no way to know how much of the blend is actually synthetic (though the industry has a gentlemen’s agreement that a semi-synthetic blend should be at least 10 percent synthetic). 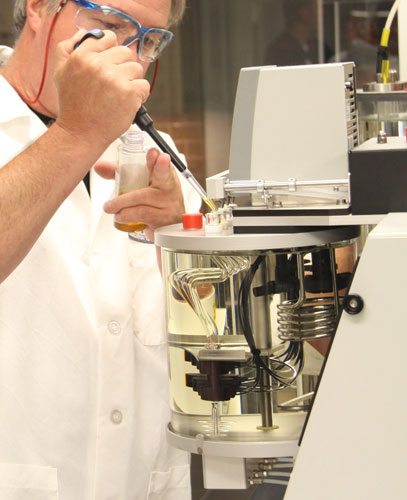 Lab technicians carefully adding fluids to make up a test blend. This process takes a lot of experience and partnerships with additive vendors to make it all work in creating a brand’s OEM-specific two-stroke oil.

Solvent, which makes up about 15-25 percent of a two-stroke blend, helps two-stroke oil pour at cold temperatures and helps it burn clean (helps oil mix with fuel inside the engine) while reducing smoke, but it hurts lubricity.  Polyisobutylene (PIB) is a slippery substance often used in two-stroke oil to increase lubricity. PIBs make up another 15-25 percent of two-stroke snowmobile oil. PIBs also reduce smoke and can be sticky after they are burned, leading to additional problems in modern engines, but they are a cheaper alternative to using more expensive synthetic PAOs.  Finally, the additive package makes up 5-10-percent of the blend. This is where two-stroke oils can really be tailored to an individual application. Additive systems are typically designed to keep components such as ring lands clean, but they are the most expensive components in the formula and can significantly increase the final cost of the oil if not chosen carefully.

Although additives are a small portion of the overall blend, they play a huge role in how the oil “works.” Common two-stroke snowmobile oil additives include dispersants, detergents, corrosion inhibitors, anti-wear elements and pour point depressants.  When they engineer oil, OEMs spend most of their time dialing in the additive package for their engine application.

“To achieve the outstanding performance and reliability level of the Rotax 800R E-TEC, we had to also develop an oil that could match the engine’s unique requirements,” says Mischa Zimmerman, engine development project leader at BRP. “High-tech two-stroke engines, like the direct-injected E-TEC, require oils with specific formulas to reduce friction, heat and carbon deposits, and XPS does that with a special additive package like no other existing oil has. That is why we so strongly recommend it.” 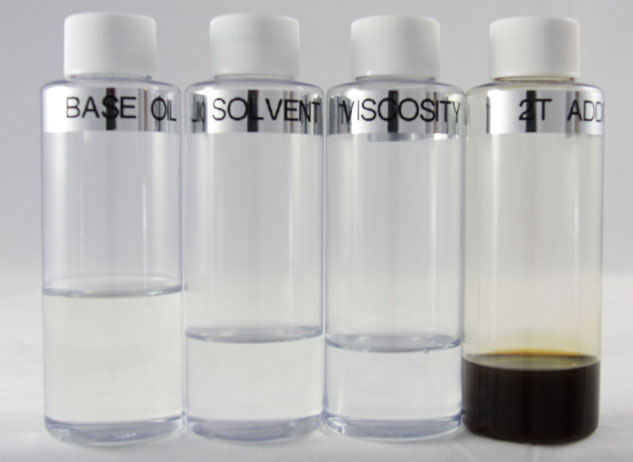 The different bottles show the different components that make up a blend. They are mostly clear – even the base oil – until specific additives and the dye go in, giving the oil its brand-specific tint.

It is far more important to the health of your engine to have an OEM-approved additive package than any other component, including such things aftermarket companies lean on to sell their oils such as synthetic base stocks. 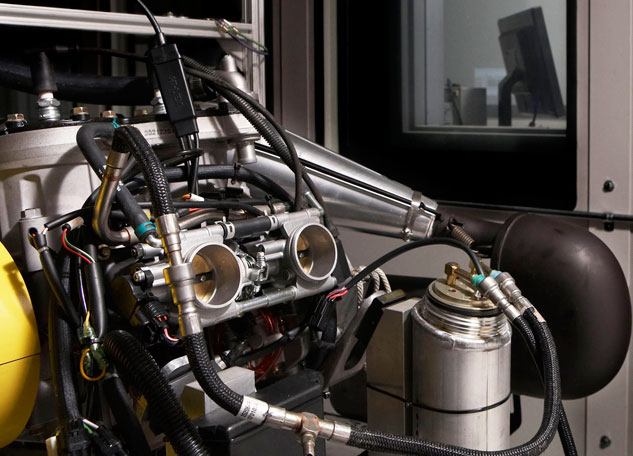 “Snowmobile technology has gone from simple carburetors to sophisticated Cleanfire fuel injection, exhaust valves and oil pump all being controlled by the ECU,” says Polaris engineer Joe Laurin. “There are no industry standards for snowmobile oil. Polaris has set our own oil quality standards that maximize the performance and duty cycle of the engine while working with ever-changing and advancing technology.”

Current two-stroke oil standards are based on carbureted, non-exhaust valve two-stroke engine configurations found in generators, motorcycles and scooters that reflect the bulk of two-stroke engine use worldwide. For example, the much-touted JASO testing uses a Suzuki SX800R generator engine and a Honda AF27 scooter engine. Both engines are more than a quarter century old, carbureted, non-exhaust valve, single cylinder air-cooled engines. These engines used as a baseline for certification are far-removed from the technology found in a modern, liquid-cooled, fuel injected, exhaust valve-equipped, high-RPM snowmobile engine. 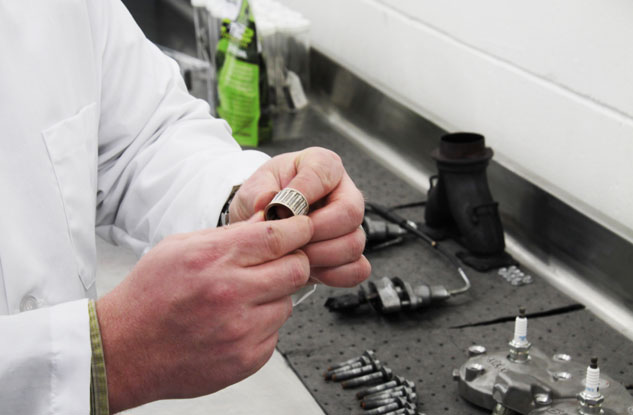 A technician inspects a wrist pin bearing based on standards established by the Coordinated Research Council, which sets basic ratings for inspecting engine parts.

Moreover, differences in engine technologies make it impossible to certify snowmobile oil to one standard. In fact, laboratory tests of all four OEM oils show they all use different formulas and additive packages. Some may have a goal of less smoke, some may want to protect specific engine components and some focus on maximum engine longevity.

“There are a lot of Yamaha two-stroke engines still on the trails,” says Steve Friedrich of Yamaha Motor Corporation. “When we develop lubricants for Yamaha engines they go through an extensive approval process focused on long-term reliability and durability. That is the reason all those sleds are still running strong.”

Focused development is the difference between OEM and aftermarket oil. If the off-the-shelf oil were good enough the OEMs would simply co-brand or recommend that instead of spending millions to develop their own specialized blends. Anyone can blend and market a “snowmobile oil,” but there is no industry regulating body to protect the consumer. So you don’t know what you’re buying.  Each OEM has a unique blend to keep its vehicle performing at its best to maximize the customer experience. For one OEM the target might be exhaust valve cleanliness, another might want special sacrificial wear elements that add protection in lean burn situations and another’s priority might be easy starting at -30 degrees. 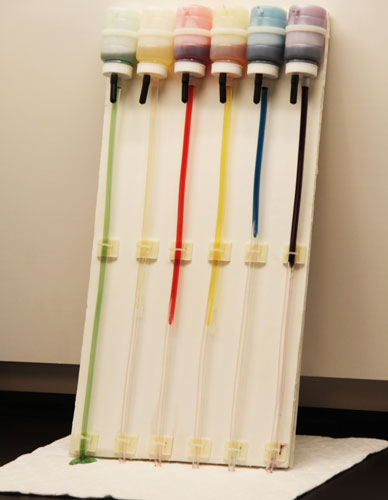 An illustration of the superior cold flow property of Arctic Cat’s C-TEC2 oil, where various oils were chilled to -30 and then allowed to dribble in the flow test to see how much quicker the CTEC2 flowed down the tube. One of the goals with CTEC2 was better cold pull for easier starting.

“As the engineers who developed the all-new Arctic Cat C-TEC2 600 engine with Dual-Stage Injection, our performance and durability demands of the oil are extremely high,” says Kim Chervestad, two-stroke Engineer at Arctic Cat. “The oil has to deliver outstanding protection against wear; provide optimum detergency to keep the engine components and power valves clean; emit the lowest amount of exhaust smoke and odor; and provide the easiest cold-starting in the industry. This is why we say with great confidence, that after a four-year development period to identify the unique oil requirements of this engine, C-TEC2 is the only synthetic oil approved for the new C-TEC2 600 engine.” 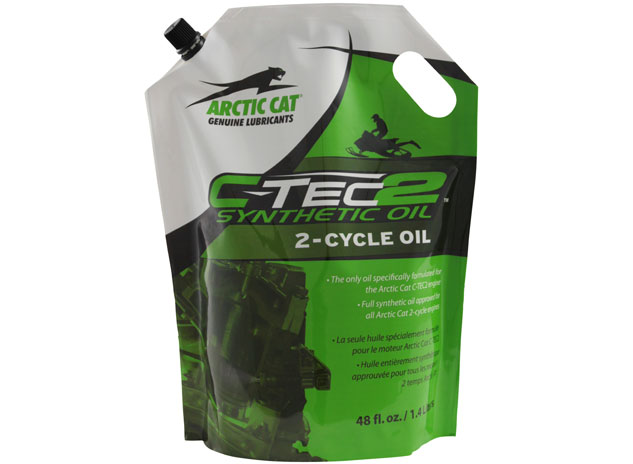 Each snowmobile manufacturer offers unique branding and packaging of its sled-specific two-stroke oils. Cat’s C-TEC2 48-ounce container is easy pouring, while its bright green packaging identifies it as the oil of choice for the new C-TEC2 600cc direct injection twin.

OEM oil is co-engineered with the snowmobile and can be considered “original equipment” to the sled. With advanced technologies such as E-TEC, C-TEC2 and Cleanfire, switching to an aftermarket oil is a significant change in how the snowmobile was designed to operate. The oil you use affects the engine performance for any given duty cycle and performance of the engine and using an OEM oil gives your snowmobile the best chance of operating as it was intended by the manufacturer and the longest operating life.