Snowmobilers expect winter to be cold and snowy, so why can't the Weather Channel?

It is what it is. The weather. We can’t change it. We endure it or we embrace it. As winter sports enthusiasts we welcome winter weather, but not everyone does. Apparently winter and impending storms freak out some folks.

Take the winter of 2013-2014 as an example. This turned out to be an old-fashioned winter: One with many days of below zero temperatures and a high snow count. Here in the Midwest, winter came about on schedule in late November. Now it did seem to overstay its welcome by a few weeks as some early April professional baseball games needed to be rescheduled here and there. But, who was counting as the local pro hockey franchise enjoyed an extension into the post-season. Winter weather should be normal for a hockey playoff. 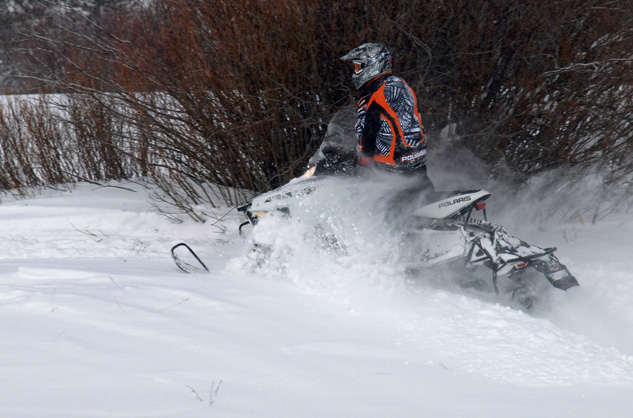 Weather folks don’t understand the snowmobiler’s need for snow and how it plays into what a rider can do when he plays.

As snowmobilers we expect winter to be cold and snowy, the snowier the better! We like that winter brings early snows between Thanksgiving and New Year’s Day. In the days that my father’s dealership sold Ski-Doo snowmobiles, he expected to sell off the bulk of his sled inventory before the first of the New Year. If it got past that, he worried. It’s like a marine dealer trying to move his inventory before the July 4th holiday. After that, unsold inventory will likely sit and generate excess interest.

A good snow year for a snowmobile dealer and a snowmobiler means something quite different than it does to non-snow enthusiasts, especially the ones who report weather as news. 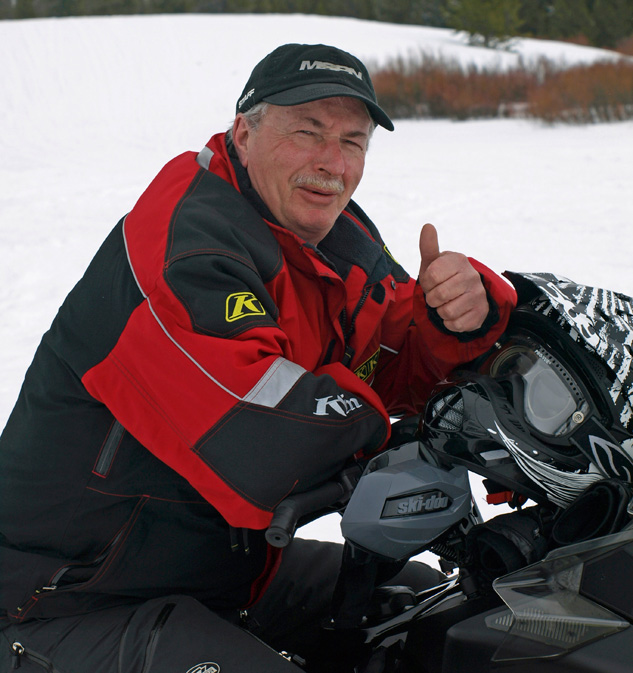 Snowmobilers relate to winter and give cold temperatures and snowy days a big Thumbs Up!

In January of 2013 we were in far northern Minnesota attending a sponsored appreciation ride for military veterans. The weather had been un-winter like, leaving the planned route sloppy with open water and bare areas along the trail. A day or two before the event, sponsors sent out riders to make certain that the route was ride-able and to make route changes where it might not be. The night before the ride was to get underway, the weather whisperers at the Weather Channel, headquartered in Atlanta, Ga., stirred the pot of fear among non-winter enthusiasts by introducing us to Winter Storm Gandolf – a winter storm as defined by the Weather Channel’s “storm team” would exceed their key “potential impacts.” One of these impacts was the dumping of 6-12 inches of snow across a large area. Another impact was the arrival of “bitter wind chills.” Excuse us, but it was January and we were in far northern Minnesota, just a few yards south of Ontario, Canada. 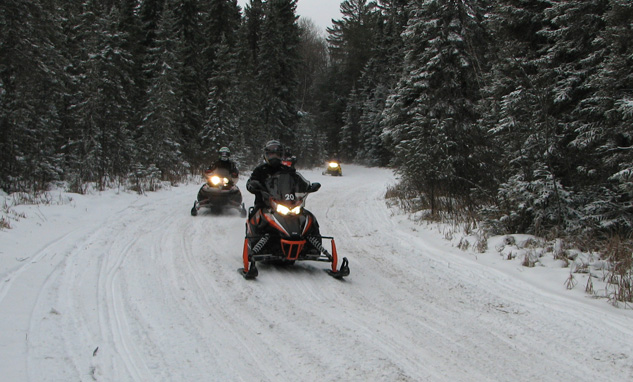 For our location and the time of year, those “impacts” were positive as the ride ended up enjoying wet and slushy spots that were iced over and a fresh coating of snow for the trails. Yes, it was a bit chilly, but not by snowmobiler standards. There was some disruption to road travel, but isn’t that to be expected on most winter weekends as we all travel to our favorite snowmobile trailheads?

Now that was the relatively tame winter of 2012-2013. This past winter was the most intense winter season ever experienced – if you are younger than about 33 years of age! For those of us older than that, well, it was an old-fashioned winter. That snowfall amount that gathered this season tended to come early, yes, but it came in spits and spurts of about two to four inches at a time. Granted those times were close together, sometimes every other day or every few days. By winter’s end the weathercasters could point to near record snowfall amounts and be perfectly right in doing so. In this “winter of the century,” we had smallish storms not the major dumps from famous storms such as Minnesota’s 1991 Halloween Blizzard that brought more than two feet of snow and did cause some real traffic disruptions. Still, the Armistice Day Blizzard of 1940 ranks as the second most significant weather event in the Minnesota State Climatology Office list of top five weather events of the 20th century!

Minnesota military veterans and their sponsors shared a group moment during the appreciation ride held near International Falls.

It’s all relative right? Weather is weather. Winter, especially one that brings lots of snow, is the essential ingredient for a snowmobiler, not so much to non-snow enthusiasts. So, why then do we have to be saddled with fear-mongering weathercasters who continually use the norms of winter – snow, ice, blowing winds, low temperatures – as fodder to scare the population as a whole.

Winter Storm Gandolf was the first “named” winter storm that we can recall. And it was fearsome. Why right there on the national weather channel outlet was a weather reporter standing outside and assuring us that we’d be lucky to survive the weekend if the storm continued to build. Only one slightly wrong thing with the reporting, the reporter who was telling us how brutal the conditions were was not bundled up and equipped with winter gloves and hat. Guess it wasn’t that bad!

Based on the winter scare tactics we observed last winter, we expected that a local major league baseball game played in our area would have to be postponed. There were dark clouds and reports of rain after all.

Back in the days when I sailed, I would check the weather reports early and then decide to abide them or not. After gaining some experience with the local weathercasters and their proliferation of fear, I reverted to common sense to determine if I would sail or not. I simply checked the skies and looked to see if small craft warning flags were flying at the marina – or not! Simple. 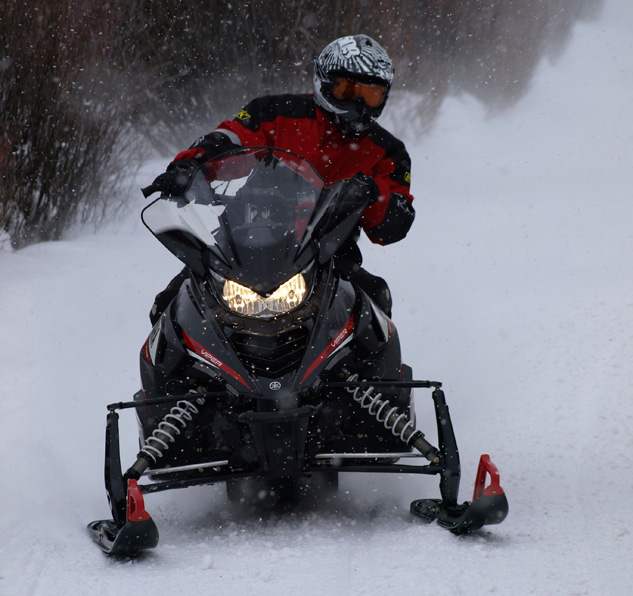 Blowing snow can create an unwanted effect in a photo sequence, but it doesn’t deter a snowmobile rider in the pursuit of a good time.

This past winter, the worst in history if you were in your early thirties, did genuinely create some havoc. There were the times when the Departments of Transportation in both Minnesota and North Dakota rightly closed the interstate freeways. Those areas feature near constant winds and a tendency to trap unwary motorists. The fact that major towns and cities between the Minnesota and Wyoming borders are many miles apart made this a prudent decision. Oddly enough, the national weathercasters didn’t focus on those travel issues. Being based in the southeastern portion of the US, the major television cable news and weather outfits don’t really cater to what they view as “fly-over” land. But, if a cold snap with blowing snows approaches New York, Atlanta or Washington DC, they’ll be all over it. That’s where they have camera crews. Fortunately, those of us between Billings, Bismarck and St. Paul are on our own. The weather folks seem to have gotten tired of reporting on our winter in North America’s northern midsection. And how many times can they legitimately cry “Winter Storm Gandolf!”

So, how about it weather nation? If you are going to have reporters giving the latest on winter weather in “fly-over” land, please at least get people who have seen snow, have experienced a biting winter wind and not those who’ve lived their weather lives in Florida! We aren’t kidding about that, one of the local weathercasters in the Minnesota market hails from Ft. Meyers, Fla. by way of Macon, Ga. Lots of blowing snow and ice in those towns.

As snowmobilers we are okay with winter, its cold temperatures and tend to get excited by above average snowfalls! How about reporting on Winter Storm Welcome Winter!