The Farmers Almanac predicts a cold and snowy winter. Yes!

One constant in merchandising the sport of snowmobiling centers on its need for snow. Simple enough, but oft times downplayed as to its significance. For example, last season showed increased snowfall in key snowmobile areas such as the Upper Midwest and Northeast. Granted, some of this snowfall came late, but it did help end of the season sales and left an indelible reminder that we did have a winter.

Sled sales that had been flat or even a bit below the previous 2011-2012 season as of late January got a boost with the snow as reflected in the actual end of season reports. Keep in mind that most companies operate on a calendar fiscal year and would likely show flat sales, although Arctic Cat should have seen a sales bump since it ends its fiscal year after the first quarter. Cat could look a bit better as it counted improved January through March sales. 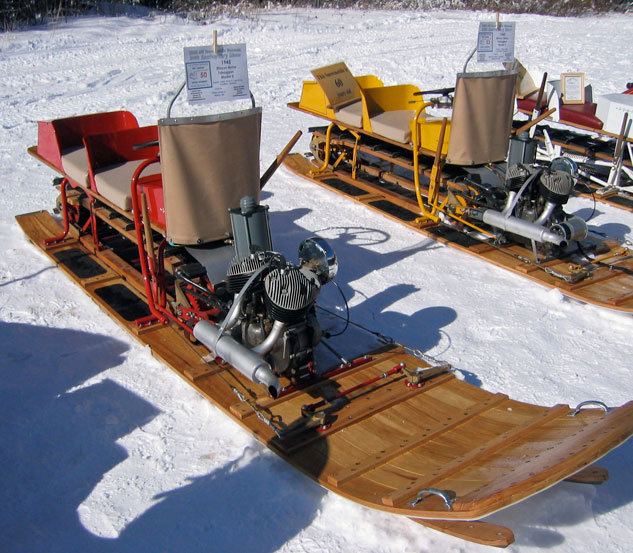 Sled sales of the early 1950s consisted of the Eliason over-snow-vehicles, which were sold primarily to outdoor workers such as linemen, trappers and the like.

Depending whether or not you’ve followed snowmobiling as a business or simply as an enthusiast, you are directly impacted by snow. Sled companies almost since the beginning tried to spread out their business over the months to increase cash flow, lessen the vagaries of a seasonal business, and justify keeping key employees working. In those early years, companies like Arctic Cat and Polaris weren’t as concerned about seasonal down times since many of its workers were also farmers. The seasonality of manufacturing snowmobiles meshed well with the needs of farming. Most of the northwestern Minnesota farmers around Roseau and Thief River Falls gained extra income from seasonal snowmobile manufacturing jobs.

VIEW: Snow is THE Answer

But as snowmobiling grew and companies’ overhead grew as well, many sled companies sought ways to keep the plants operating. For sled makers like John Deere, Outboard Marine, Coleman and others that came into the sport with established products that were dependent on snow, they could simply transfer a snowmobile manufacturing line over to a lawn tractor line during the “off-season.” John Deere did exactly that at its Horicon Works in Wisconsin. It made sleds in the summer and fall and lawn tractors in the winter and springtime. Cat, Polaris and Ski-Doo had to create new businesses to fill in. 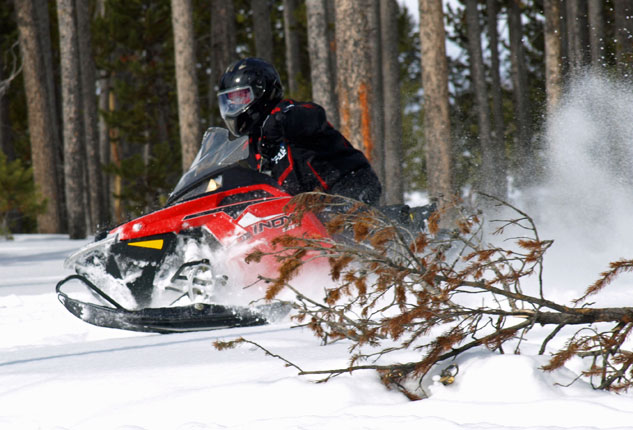 The promise of snow is essential to the sale of performance sleds such as this 2014 Polaris Indy SP.

Early on Polaris experimented with wheeled products. Later on, Polaris introduced an all-terrain “wheeler” that eventually changed that market by utilizing snowmobile-type transmissions, “on-demand” all-wheel drive, runningboards instead of dirt bike-styled foot pegs and long travel MacPherson strut front suspensions. The Polaris ATV project, like Deer’s lawn tractors, meshed nicely with the snowmobile manufacturing cycle. This helped solve cash flow, down time and revenue problems, but created a bit of a problem in having enough workers as most of the farm-oriented workers still farmed in snowmobiling’s off-season!

Those problems ebbed as now we have four surviving snowmobile manufacturers that could probably survive without a snowmobile element of their business. Well, let’s exclude Arctic Cat, which counts sleds as 39 percent of sales, meaning simply that corporately Cat depends on snowmobile revenues more than Polaris, BRP/Ski-Doo or Yamaha. In reality, for a strong sport there need to be strong snowmobile makers and that comes down to snow. S-N-O-W.

When these Ski-Doos reigned supreme as THE sleds of winter, snowmobiling was a new and exciting sport with untapped growth potential. Sales neared a half-million units by 1971.

In the past we have seen very intelligent, extremely well educated, highly experienced marketing types try to circumvent that one constant that is snow. These gurus came up with great plans that worked to a limited degree, but would have been brilliant had it snowed a normal amount. And there was an issue of a souring economy, too, which seems familiar to current day marketers. With all of that brainpower, sled sales and revenues fell. That was pre-bankruptcy Arctic Cat.

Interestingly, a decade later in post-bankruptcy Arctic Cat, a group of young, enthusiastic sales and marketing types launched their own “new” marketing initiatives, at best vaguely aware that such plans had been tried in the past. That nouveau strategy worked. Not so much because it was a good idea, which it was and had been in years past, but because there was snow! The timing of the snowfall mattered the most to making geniuses out of the new guys and thwarting those old marketing pros! 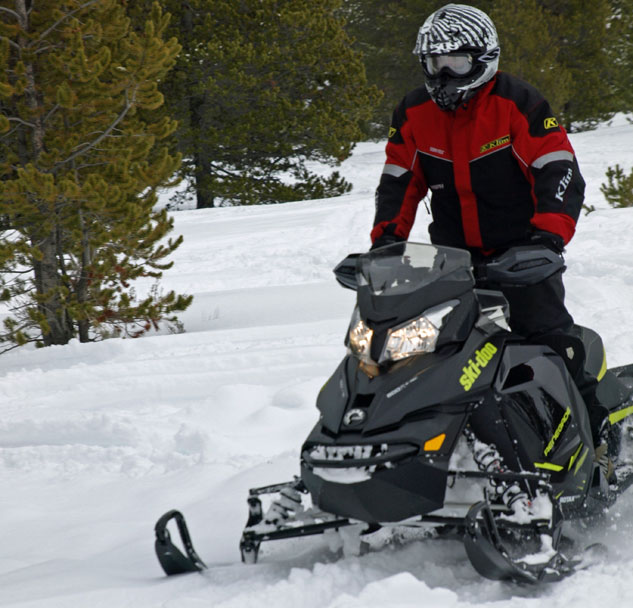 Times and technologies have changed as the sleds of winter, like this top of the line 2014 Ski-Doo illustrate, are more efficient, more powerful, and more expensive, but ever more dependent on consistent snowy winters.

So, hold on to your helmets, if the Farmers Almanac can be believed – and experts admit that it tends to be essentially right about 80 percent of the time – then sled sales should be on an upward move as that publication predicts: “Significant snowfalls are forecast for parts of every zone.”

That coincides with a forecast of below average temperatures for more than two-thirds of the US, which includes abnormal low temperatures north and east through New England.

While that may make some folks rush to Sears or Wal-Mart to stock up on “longies,” snowmobilers and snowmobile manufacturers will head to snowmobile dealers and online sled sites as snow or the promise of snow should fire up all of our moods. 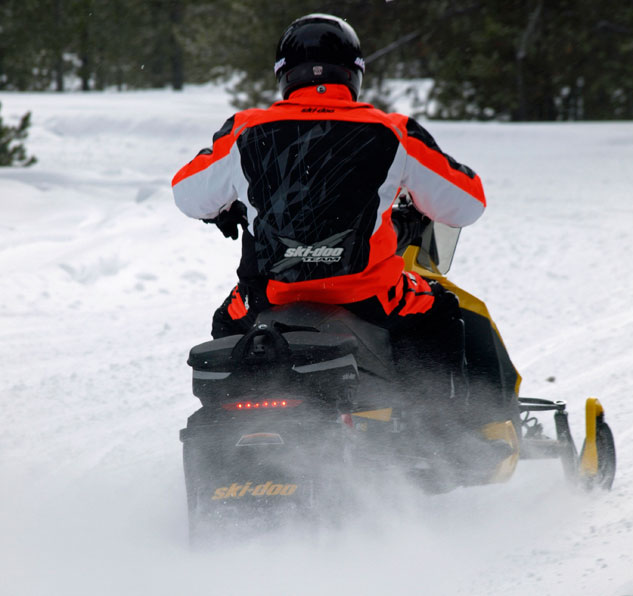 Snowmobile sales are less dependent on trail technologies such as “green” four-stroke powerplants in more and more of the 2014 models than the snow to ride on.

Looking at last season, late snow encouraged late season sales. Previews and demo-rides of the 2014 sleds proved extremely active. While one lone good snow year won’t create a stampede of sales, one plus another one should push interest. Historically, ample snow seasons translated into strong sales.

When the “new” Arctic Cat came back from the old Arctic Enterprises bankruptcy, it followed a snowfall curve that led to better than planned sales. Indeed, the people behind the resurrection of the Cat had planned quite small, figuring on a very modest production. That plan went by the wayside as the mid 1980s began a rebound that saw a sales demand go from 150,000 units sold in 1992 to more than 260,000 sleds sold annually by 1997, just five years later! Snow and the economy perked up.

With current sled sales mimicking those of the early 1990s, can we expect a similar snow-driven rebound two decades later? At least the Farmers Almanac seems to think we’re in for a snowy winter. The publication is even predicting a big snowstorm to coincide with next year’s Super Bowl, which is to be played outdoors at New Jersey’s Meadowlands.