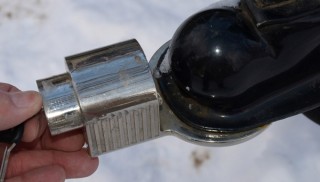 As we enter this new year of 2015, most traditional snowmobiling areas and destinations enjoy ride-able snow and snowmobilers have optimistic enthusiasm resulting from three back-to-back-to-back seasons of honest-to-gosh snowmobiling. Early pre-season snowmobile sales powered sled makers’ early financial reports and there are hints of strong 20 percent or more end of year growth increases. Things are looking up for snowmobilers as we head into 2015. And let’s not forget that gasoline prices have fallen to their lowest point in six years, which means more sledding miles for less dollars spent for fill ups. Yeah!

If you are one of those snowmobilers who bought a new sled for the season, you’re imagining visits to trailheads and weekend destinations that you’ve put off since the Great Recession – and pathetic snowfall seasons. The economic outlook invites more recreational travel and a loosening up of discretionary dollars for play.

Ahh, the season ahead seems filled with promise. You have a new or favorite sled loaded and ready to trailer. The tow vehicle is tuned and prepped. How about your snowmobile trailer security? Is it primed for security or pimped out for theft?

In Search of the Versatile Trailer

Unfortunately we learned the hard way about trailer theft. Fortunately we didn’t have any sleds sitting on it when thieves did a literal smash-and-grab of our three-place snowmobile hauler. We had it locked and parked in what we felt was a lit and secure location. Guess the lit part must have assisted the thieves who simply slammed a sledgehammer against our coupler hitch lock, threw the pieces aside and then simply towed our trailer away. The crime was reported to the police, who did respond adequately by creating a report, which we could use when notifying our insurance carrier of the loss. But, truthfully, we always had the feeling that the on-call policeman somehow felt we were mostly at fault. Our coupler lock was an inexpensive kind that tends to make the trailer owner feel that he’s secured the unit as soon as he pockets the key. 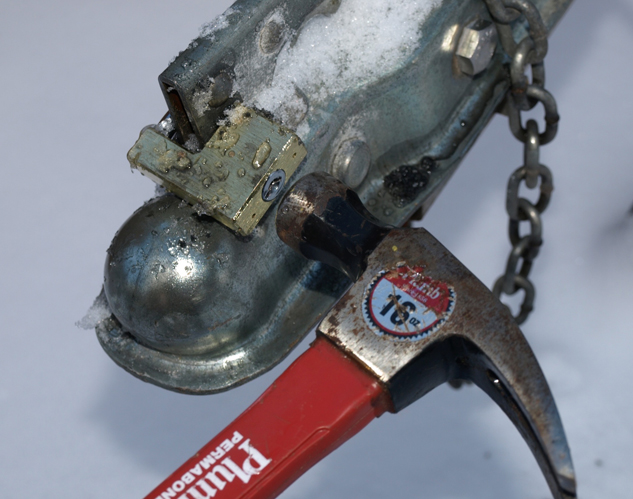 Inexpensive coupler locks work great for securing your trailer to your tow vehicle when traveling, but we don’t recommend them as long-term theft deterrents when storing your trailer. A few sharp blows with a hammer very easily can defeat the lock.

We’ve learned a bit since then. We no longer have a multi-place snowmobile trailer. And we’ve shed our tall and powerful five-passenger truck in favor of a more fuel-friendly tow vehicle. Wouldn’t you know, right after we dump the thirsty V8 torque-monster, gas prices dropped 40 percent! Even so, since we travel to our lake cabin to meet other riders or head up to our favored and close by trailhead, we rely on two single-place trailers we’ve personalized a bit for our own use. Because these are our lifeblood to getting tracked vehicles to our destinations, we take security seriously. We could do more, though.

Having had that three-place trailer ripped off, we found better locks. We have three different lock types for these units. The serious locks fit into the coupler and deny an easy drive up and away theft. The third lock we use to secure the trailer to the tow vehicle when underway and when left unattended at rest stops such as gas stations and restaurant parking lots.

The travel lock works well for its intended use, but would never withstand a serious hammer attack at a motel or resort’s overnight lot, where we might unhook so we could use the tow vehicle to find an in-town restaurant. That’s when we fit one of the coupler locks. So far, these two locks have been enough to deter thieves. But for home storage we would consider adding wheel locks.

We use burly keyed locks, Master Lock’s Universal Trailer Coupler Lock and a Tow Ready (Gorilla Guard) universal coupler lock. There are other locks similar in function to these, but these are what we’ve settled on – until the next theft proves us wrong! 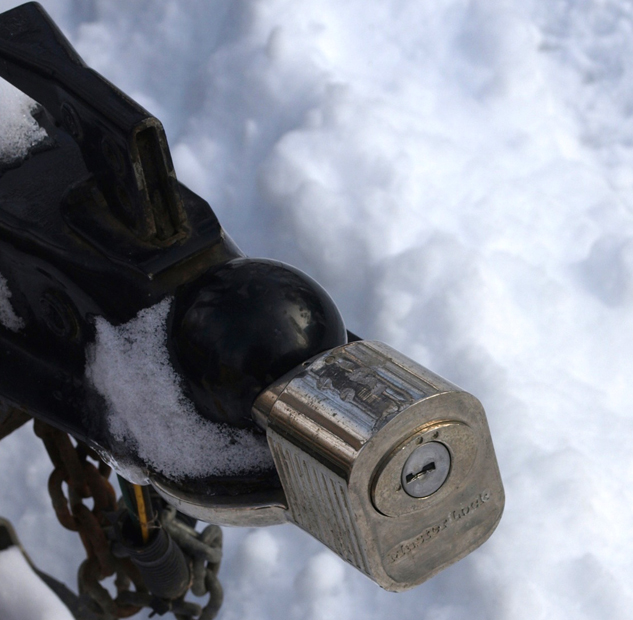 With a suggested retail of about US$50, the Master Lock universal trailer lock fits into the space for your coupler ball. Made to look good with chrome-plating and die-cast zinc style, the Master Lock is designed to fit 1?-in to two-inch plus hook ups.

The Master Lock suits our needs as it’s versatile enough to fit 1?-in to two-inch plus hook ups. Chrome-plated with die-cast zinc construction, the Master Lock appears rugged in that bullet-proof look the company made famous in its advertising. Plus, there is that lifetime warranty, which probably won’t count for us anymore. We’ve had this lock for years as you can note from the scratches and beginnings of rust.

Regardless of all that, the lock slips into the coupler and then you simply use the key to adjust the locking bolt onto the lip of the coupler. Master Lock claims that this system resists picking and prying. We tend to agree. 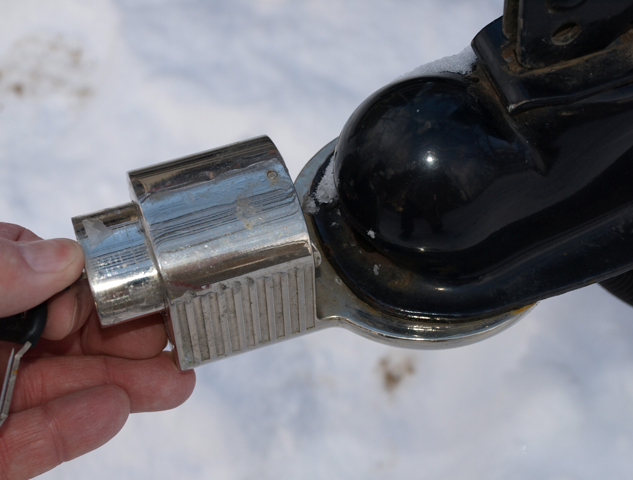 This lock is very easy to fit and remove, but we found it surprisingly heavy at just less than four pounds. That is a good thing, though. The Master Lock is available at many auto, truck and trailer parts outlets for US$30 or more.

Our other serious lock is the Tow Ready Universal Coupler Lock model 63226. We’ve had ours when it was called the Gorilla Guard. Either way, this is the same design and is readily spotted by its bright yellow casing and chrome U-hook that fits over the coupler. Like the Master Lock, our Gorilla Guard sits up in the coupler’s ball socket. Lower the coupler lock lever, drop the U-hook over the coupler and into the casing and then simply lock it down. Like the Master Lock, this device fits 1?-inch to two-inch plus couplers. 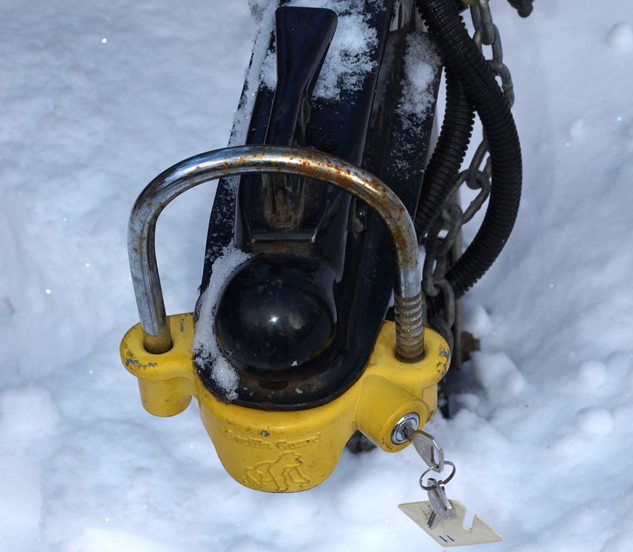 The Tow Ready Gorilla Guard universal lock features a separate chromed U-hook to fit over the coupler lever and into the casing.

The suggested retail for the Tow Ready (Gorilla Guard) lock is about US$50, but the lock tends to be on sale at various online trailer parts sites for US$35 or less. We suggest shopping around for your best deal.

How to Improve Your Snowmobile Trailer

One idiosyncratic issue we have with all of these locks is a tendency for the keyed parts to freeze-up under certain conditions like “frizzle” (the North Dakota term for freezing drizzle, of which NoDak has great experience!). If you have rain preceding a snow event, you should anticipate freezing locks and either use a piece of tape to cover the keyhole or try injecting anti-freezing liquids into the key lock ahead of time. If you forget and you’re fumbling around, cursing and about to twist the key head off, try heating the key with a propane cigarette lighter or fire starter. Of course, you’ll quickly figure out that heating the key hot enough to melt the ice in the lock means you’ll need to wear a glove when doing this! 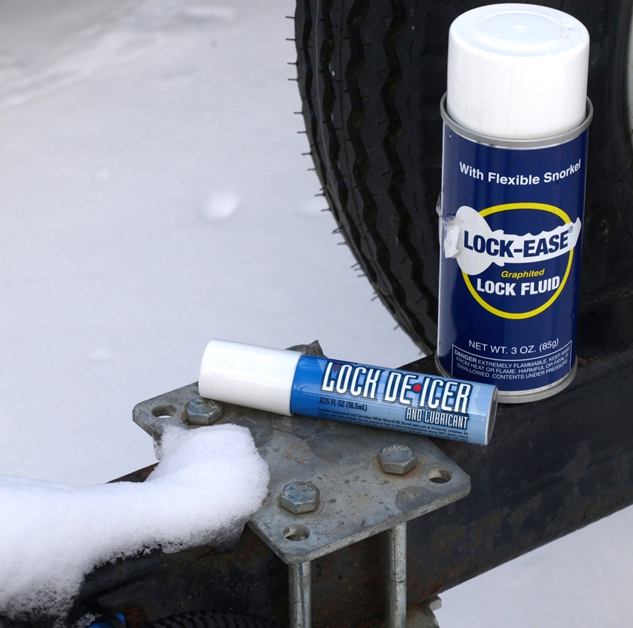 Most locks we’ve used are susceptible to icing up, so carrying some kind of deicer is a good idea.

Both of these locks are tough enough to embrace some rubber mallet hits to break up ice on them, especially the Gorilla Guard’s drop down toothed lock end.

None of these locks are totally fail-safe if a prepared and determined thief assaults your trailer, but they will require the thief to come prepared. He’ll need a steel cutting saw blade to cut through the Gorilla Guard’s chromed U-hook. Or, he’ll need a strong battery-powered drill and metal bits to penetrate the locks to make them ready for a full-on sledgehammer assault. But, then, a quick visit to the darker side of the YouTube video kingdom will alert you to the many ways of thievery and circumventing security devices. 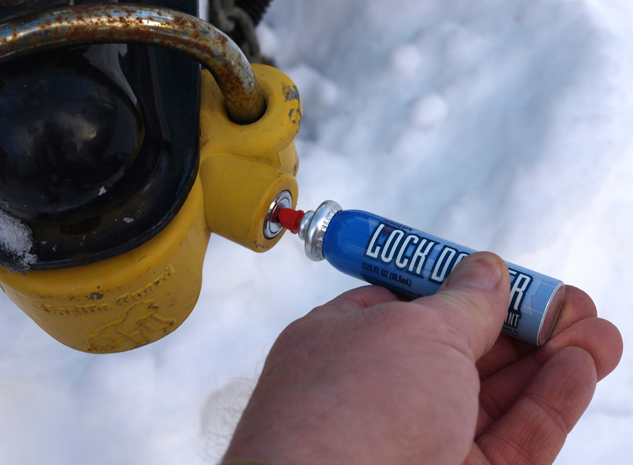 You can find lock deicers such as this one that propel the lubricant directly into the keyed lock on our Tow Ready Gorilla Guard trailer lock.

We believe in these products, or newer versions similar to these, for our trailer security. We feel that the inexpensive locks that retail for $10 or so and mount through the coupler hole work for travel and quick stops, possibly an overnight at a resort lot. But, we aren’t ready to entrust our $14,000 snowmobile to that type of lock as our only protection. We’d consider the addition of another security device like a wheel lock or chaining up to a post or tree. When left to their own dishonest intentions and given ample time and determination, all you can really do is slow down the thieves or, at least, keep basically honest folks, basically honest!