Are you a blender? Do you blend extra ingredients into a recipe? If you could, would you dip a crispy piece of hickory-smoked bacon in a chocolate fountain rather than a strawberry? Being a bit edgy is a bit of fun. Your humble mountain editor likes a pinch of cayenne pepper and organic cinnamon in a tall frothy hot chocolate.

You see, Arctic Cat is a four-stroke company. Arctic Cat, too, is a two-stroke company. Four-stroke mountain sleds within the M line consist of the M7000 and M9000. The M7000 Sno Pro is Yamaha-powered. The M9000 is Suzuki-powered and turbocharged. For the two-stroke M line, there is the M6000 and the M8000. The M6000 motor is all Arctic Cat-designed and built. The M8000 engine is Arctic Cat-engineered, with Suzuki collaboration, and Suzuki built.

But, let’s focus on the new, which is the Yamaha three-cylinder four-stroke-powered M7000 Sno Pro. To the specifics, the M7000 Sno Pro carries Yamaha’s 1049cc electronically controlled fuel-injected (EFI) motor that produces approximately 135 sea-level horsepower. This motor has been around since Yamaha introduced its FX Nytro chassis. The motor has a solid reputation for reliability and good fuel economy. In the Arctic Cat chassis, the motor is called 7000 C-TEC4.

Product sharing between Arctic Cat and Yamaha is common news, given that we, with the speed of print electrons, gave much timely information to explain the partnership between the two companies. However, though the two companies exchange a motor for a chassis, the two remain, according to each company’s press corps, independent. But, we’ve seen the two companies sneak out at night meeting under the old oak tree to discuss the intimate details of their relationship. 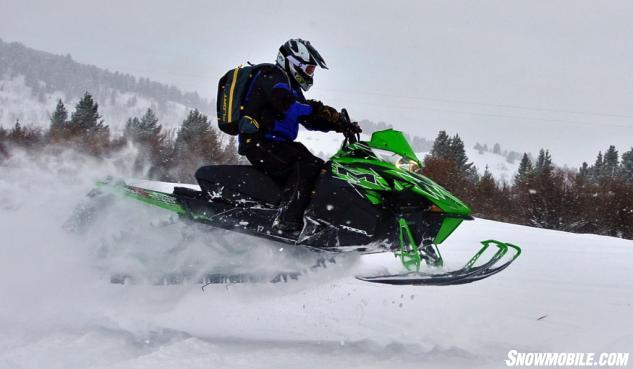 Taking the M7000 Sno Pro for a flight is easy to do as the Yamaha four-stroke motor zips up the RPM and rotates the 2.6-inch PowerClaw with ample speed to lift the nose setting up the pilot for a launch.

The M7000 Sno Pro is built on Arctic Cat’s triangulated upper spar ProClimb chassis with two-piece tunnel. Its track length is 153. The track is the hearty 2.6 PowerClaw that is 15 inches wide. The rear suspension is Cat’s own Mountain Rear Suspension with a tri-hub rear axle. This springless 153-inch rear bump soaker uses a FOX Float 3 air shock at the rear. On the front arm, an Arctic Cat (IFP) shock takes the first jolt from impact. Vertical travel for the Mountain Rear Suspension is 15.5 inches.

The front suspension is the Arctic Race Front Suspension (ARS) that combines tall lightweight spindles and widely spaced A-arms to give torsional rigidity. The lower A-arms mount in a 30-degree angle to give a stable and comfortable ride. Front shocks are FOX Float 3s. Vertical travel for the ARS is nine inches. Ski stance is an adjustable 38-39 inches.

After having FOX Float shocks on other Cat products, we recommend becoming familiar with these air shocks and tailor their air pressure for load and riding style. Steering on the ProClimb M7000 Sno Pro is a vertical system, which allows the bars to swing flat like an off-road motorbike and which makes for manageable deep side hill cuts. This system is the same as on the M9000, a fixed post with a surrounding four-post support tower. This is not Cat’s telescopic system, which is used on the M8000 and M6000 Sno Pros.

The ProClimb chassis adapts to Yamaha’s triple motor quite well as the chassis was designed to house both two-stroke and four-stroke motors with all the plumbing, exhaust and valve train.

The 7000 C-TEC4 motor spins Arctic Cat’s own clutches, which makes the motor’s output to the track drivers behave how Cat desires. The drive clutch is Arctic’s six post (rpm sensing) design, whereas the driven is Cat’s standard 10.75-inch roller-cam. These are the same clutches on Cat’s other high end M-series models.

The M7000’s drive and driven clutches are gentle on the bottom and up through mid-range revs. From mid to the upper revs, the wow factor kicks in and the C-TEC4 unleashes its torque on the top curve; for a 135-horse motor it is naked fast. This is the personality Cat wants to give the M7000 Sno Pro with C-TEC4 power. Its sister ship, the RS Viper MTX, busts out the launch rpm in a hard-hit, lifting the skis and snapping the driver’s head, then mellowing as the revs climb to the top. The M7000 Sno Pro is the opposite, mellow down low, blistering fast on top. Though the M7000 is shown here on flat land in a one-ski stance, this sled is as capable on a steep slope pulling off sidehill cuts as it is carving an “S” in a meadow.

The M7000 at 5,700 feet and higher felt strong – this is a grunt motor. Its tall legs from mid-range and beyond gave the feeling a one-mile straight shoot may not be enough. However, we are more interested in mountain kicking than trails. The M7000 is a confident powder hound with its 135 horses. It climbs and handles the deep stuff quite well. Remember, this is a 600cc class snowmobile, though its motor is a 1049cc four-stroke.

In the backcountry, we found the M 7000 to be a fun tree picker. It traverses mountain snow quite well, even if the slopes have a half-foot of fresh fluff. Don’t be afraid to explore backcountry slopes on the M 7000 Sno Pro. We certainly gave it a whirl.

The motor sends gentle spins to the PowerClaw track to keep the chassis flat and on top the snow. Over the years, we have had several 1049-powered Yamaha mountain-specific snowmobiles and have come to appreciate the motor. In the Cat ProClimb chassis, it is smooth and responds well to throttle input. For our several days of testing, the M7000 Sno Pro gave us confidence. 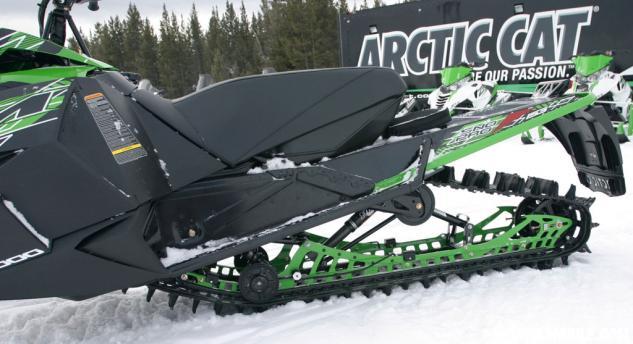 Ergonomic-wise, the M7000 Sno Pro is pleasant. It provides comfortable seating where arm-reach to the bars is a strenuous activity – typical of the ProClimb chassis. The wide and deep footboards and toe holes give proper knee and ankle bend. Wind protection is sufficient for powder riding.

The instrument pod is easy to read when sitting, but when standing to navigate backcountry trees and ravines it is hard to pick up motor information.

We found the M7000 Sno Pro to have a plush ride. Its shocks seemed to control the suspension in a falling-rate manner – somewhat stiff as bump soak began to soften as the suspension stroked down through its collapsed position. The ProCross-style ski controlled the left- and right-hand bends with ease, but failed to keep the nose upright in marginally deep-snow conditions. The M7000 Sno Pro would greatly benefit from a wider ski, given the motor’s weight on the nose; the ski has limited flotation. 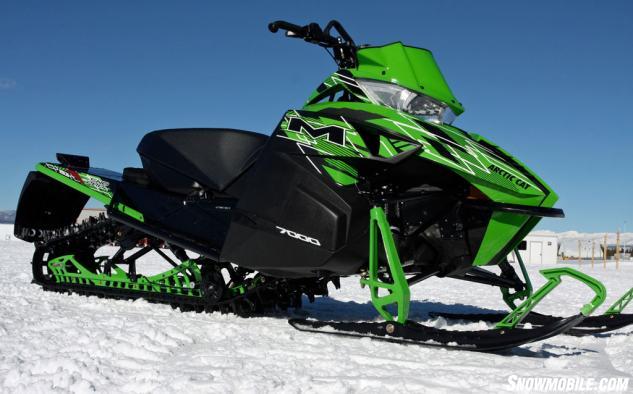 The M7000 SnoPro’s runningboards are stiff and have wide holes to dump snow. The handlebars’ kill switch and heater controls are nicely situated, and for the kill switch, it’s properly housed to prevent an unplanned activation. The bars have a center-mounted pull strap for needed leverage when rolling the M7000 onto its right or left side for a sidehill slice.

We found the seat’s width ample enough to keep our south side locked down and is short and narrow enough for leg swings when setting up for some one-ski runs along a slope.

This sled is the real deal for four-stroke mountain climbing in the 600 class. We like this sled, we really do; it is the perfect blend of reliable Yamaha power and Cat ProClimb tech, and it is also sweetly stirred.

The technology behind the 7000 C-TEC4 motor is nice, and it gives the Arctic Cat loyalist comfort and pride knowing his or her snowmobile has a dependable turn-key motor that will deliver several thousand miles of boonie bashing fun.

Would we own one? You bet.