Five mountain steeds are put to the test

In our first phase of powder sled evaluations, we introduced you to the sleds, the riders and our ways of testing. You can read that first phase right here. In Part Two we’ll wrap up the tests and draw some final conclusions and offer some opinions. But remember, these are our opinions and we fully expect that not all readers will agree. Nor will we doubt that some of these results might change on a different day under different snow conditions. Be that as it may, this is what we found as we continue with our Powder Sled Evaluations.

In Part Two of our 2010 mountain snowmobile shoot out, we test the sleds on an uphill-timed straight line speed run and measure fuel and oil consumption and actual miles traveled as measured by GPS feed. To get this we mounted a GPS receiver on each sled. With each sled’s trip meter set to zero, we deduced actual miles traveled versus track miles, which also gave us true fuel and oil consumption rates).

Rather than go through each sled’s technical makeup, check out our tech pieces on this site, as well as our mid-season report on the five. Using a Protractor we measured the angle at which the snowmobiles would roll over into a side hill.

Now for our disclaimer, these results are not omnipotent. On any given day, results change. No matter how comprehensive we were, results will vary as snow conditions, temperature and elevation changes. Driver mastery also affects a snowmobile’s performance. However, with our numerous location changes, we feel our results reflect real world riding and are accurate.

*Did not complete speed run, lower A-arm knocked out from rock hit.

In our M8 vs. M1000 slugfest, we learned from our timed speed runs and deep-powder comparos, the M1000, though heavier than the M8, is still the Boss. The M1000’s torque works well in stupid deep snow. It will out pull its lighter and equal horsepower M8. Now, are we are NOT saying by leaps and bounds? But, just enough to keep the M1000 in its godfather status. When diesel-like torque is needed, the M1000 gets the call. As mentioned in the Mountain Team’s mid-season report, in deep and thick powder, a rider must be nearly incompetent to bury the big Twin M. We do hope Arctic Cat finds a way to keep this motor in a mountain chassis for years to come. The Arctic Cat M1000 had plenty of ponies under the hood to set the fastest times up the hillcross course.

Now, the Dragon and M8 are evenly matched. Last year, the Dragon bested the M8 in our timed speed runs. But, the M8’s weight loss, and amped-up motor has made it faster on the slopes. The Polaris Dragon 800 had a solid pull during the up hill timed speed course and managed the second fastest time of the day.

The M’s Power Claw track seems to be more adaptive to varying snow conditions, more than Polaris’ Series 5.1 track. Last year though, the Series 5.1 track fell within that prime window, just for a very short time, where it bested the Power Claw track. Again we must clarify, the differences between the two are not vast and wide. For this year’s snow condition, the Series 5.1 seemed to trench more than the Power Claw. But on another day, that could change. As you can read from our speed run results, the two 800-class sleds paired well.

Also know, the Ms tracks have 2.25-inch lugs, whereas the Polaris spins a 2.4-inch track.

The 700 RMK and Nytro, though in the same horsepower class, truly rest in their own camps; though horsepower between the two are similar, the Nytro handled the deep snow more like a 600. The Nytro motor has a smaller horsepower-to-weight ratio than the RMK 700. But, we are not going to hand off the Nytro as a non-competitor. Its trail manners are excellent. Its ergos are great. Its looks are killer sexy. And….and….in deep powder, it tractors and tractors and tractors. Yes, it will not burn a hill with bullet-like speed, but it will muscle its way up. Additionally, with its greater than a two-stroke Twin torque, full throttle need not be applied in all cases when taking on a hill. The MTX Nytro transfers well, and will tail walk if the driver fails to master its throttle bodies. It likes a fairly tight track and shortened limiter strap. In our turning radius test the Yamaha Nytro edged out the competition by turning one complete circle in 22 feet 2 inches.

Track speed adds much to traveled-distance, that is, ground covered. On average, we noted about an 8 percent difference between odometer miles and GPS miles. What does this mean for you? Nothing, but it is data that we motor heads like to have in our….motor heads.

The 800 Dragon’s oil consumption surprised us, it being nearly double that of the other two-stroke motors. After dumping in the 42-ounces we discussed the matter with the Dragon’s receiving dealership and they mentioned to us the pumps calibration is set to high and must be dialed down. We will take care of that for its consumption rate should be that of the others’.

We must be very clear here, this test staff can make a sled pull good mileage or very bad mileage. Timed runs in waist-deep powder — in heavy moisture-laden powder — taxed our sled’s fuel consumption; we worked and pushed these sleds hard at wide-open-throttle.

NOTE: After the evaluation, Sr. Mountain Team Test Rider, Kevin Allred, delivered the 800 RMK Dragon to Rexburg Motor Sports (RMS), Rexburg, ID, for an understanding of the Dragon’s high oil consumption rate. The service department techs at RMS adjusted the Dragon’s oil pump cable to OEM settings, as it had stretched “past center” to full open. The Dragon is now using oil at a greatly reduced — normal — rate.

Additionally, with two forty mile “normal” mountain rides conducted on the five sleds since our day of hard full-throttle timed runs, the M1000 is averaging 10.5 MPG; and the M8, Nytro MTX, RMK 700 and 800 Dragon RMK all are averaging one mile more at 11.5 MPG.

Snowmobile.com has learned from this season that track speed is more a benefit than track length. But, we must qualify this statement. The difference in flotation between a 162/163 and a 153/154/155 is minimal; the gain in track speed, from the motor spinner a smaller footprint, outweighs the advantage of a longer foot print. This is our opinion and others will argue the opposite point. 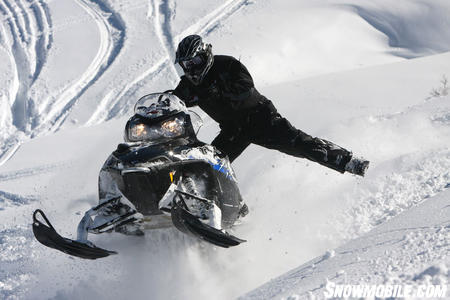 Bret Rasmussen does what it takes to keep the 700 RMK straight after coming out of a tight corner on the hillcross course.

When we conducted our timed tests, Rob Weston of Providence, Utah, a former Rocky Mountain Snowmobile Hillclimb Association (RMSHA) racer joined us. He brought with him a well-tuned 100 percent stock 2010 Arctic Cat HCR; he piloted his HCR in our timed speed runs. 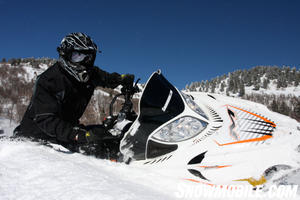 The HCR verified what we learned from the 700 RMK ? track speed is good, very good. Additionally, the harder compound track performed exceptionally well in this day’s condition. So….. Snowmobile.com’s Mountain Team is changing its mind about longer is better; we are becoming 150-ish supporters. And we would like to see an HCR 1000.

We can’t nail down a clear winner from our tests. As mentioned earlier, we had three soloists, and one 800 – the Summit – MIA, in our 800 class. However, here are our conclusions. The 700 RMK is by far the biggest bang for a buck. It was our sleeper sled and defiant to the larger-bored 800s.

Track speed is crucial. Length may not be master over faster spinning tracks. Kobi Stevens of Northstar’s Ultimate Outdoors in Preston, Idaho, goes through the timing lights on the hillcross course.

Heavier and higher-mounted weight is, at times, easier to kick right or left. But, as we well know, weight has its disadvantages too, more so than lower-hung mass (Dragon vs. M8); low hung mass equals balance.

At season’s end, we will give a final, long-term report on our five media sleds. Stay tuned.