We concluded our evaluation the last weekend of January on the mountains near Preston, Idaho. However, we did begin our evaluation four weeks earlier by racking up miles on three separate outings near Alpine, WY. 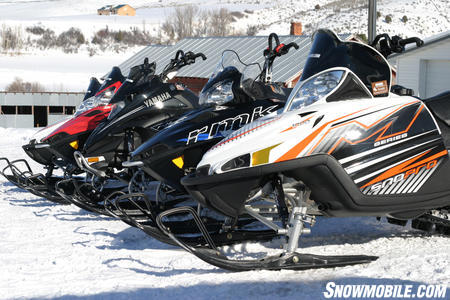 Unusual for this year, we did not have an 800 Ski-Doo XP Summit to evaluate. On four individual instances, we contacted Ski-Doo to hopefully have an XP for our use, even if for a month. Alas, this did not happen and they aren’t included.

For the 800 shootout, we matched the 800 RMK Dragon and M8 Sno Pro against each other. We’d hoped to test the changes Ski-Doo made to the Summit’s front suspension and rear skid to verify if the geometric changes made to the XP-chassis Summit did indeed make it easier to handle on the sidehills and through the trees. We’ve heard reports about the Summit’s changes, but we can’t confirm them here. 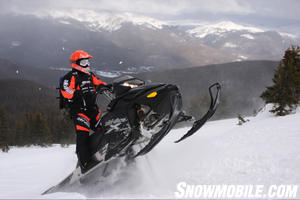 Unfortunately, we couldn’t procure a Ski-Doo Summit for the evaluation.

Of Snowmobile.com’s five media snowmobiles, only two were in the same class, the 800 RMK Dragon and M8 Sno Pro. The other three, FX Nytro MTX, RMK 700 and M1000 Sno Pro were class loners. However, if looking at horsepower classes, the RMK 700 and Nytro MTX are fairly matched, though one is a two-stroke Twin and the other a three-cylinder four-stroke.

For our 2010 Powder Sled Evaluation, we solicited the help of “Schooled” master rider Bret Rasmussen, Preston, Idaho, and Steve Stevens and his son Kobi from Northstar’s Ultimate Outdoors, a Preston, Idaho Yamaha and Polaris dealer. This gave us assistance to assure our fleet-of-five was at their optimum. The Stevens’ ensured our two Polaris RMKs and our Nytro had their A-game on, such as electronics dialed in for fuel octane grades and track tension etc.

For this model-year 2010 mountain snowmobile shoot out, we completed ready-to-ride weights (warm and dry snowmobiles filled with fuel, oil and coolant); degree/angle where the snowmobile tips over beyond its balance point; turning radius; uphill-timed hillcross; uphill-timed straight line speed run; full wet-weight after the day’s ride (to know how much weight the snowmobile gained); fuel and oil consumption; and actual miles traveled as measured by GPS feed. (We mounted a GPS receiver on each sled. With each sled’s trip meter set to zero, we deduced actual miles traveled versus track miles, which also gave us true fuel and oil consumption rates).

Rather than go through each sled’s technical makeup, check out our tech pieces on this site, as well as our mid-season report on the five.

Now for our disclaimer, these results are not omnipotent. On any given day, results change. No matter how comprehensive we were, results will vary as snow conditions, temperature and elevation changes. Driver mastery also affects a snowmobile’s performance. However, with our numerous location changes, we feel our results reflect real world riding and are accurate.

In table format, you will see results from data points for each snowmobile test within a specific criteria. 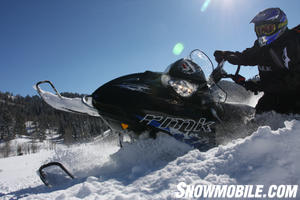 Western Editor Matt Allred shows off the great side hilling capabilities of the Polaris 700 RMK.

Historically, dry or “shipping weights” are controversial. Knowing of the many no-win controversial arguments, we packed each snowmobile with fuel, oil and coolant, and the OEM-supplied tool kit and air pump (if equipped with air shocks), and we hung them from a scale. Prior to weighing and to be sure each snowmobile was dry, we parked them in a heated shop for one week.

Note the 700 RMK’s weight is a half-pound less than the Sno Pro M1000, and only 8 pounds more than its longer-tracked 800 Dragon sibling. This is not faith shaking, however we will prop up this topic in a later analysis.

Regarding tip over; in essence, the lower the number, the easier it is for the driver to roll the sled up on a knife’s edge and begin the business of cutting a mountain in half, or reefing through narrow-spaced trees. Snowmobiles with a high center of mass, like the RMK and Dragon, kick over with ease. Low hanging centralized mass is harder to pick up and toss right or left. As light as Cat’s M8 is, and in comparison to the 800 Dragon, it is just a wee bit harder to roll right or left; being the RMK has more higher-placed metal above the drivers: jackshaft and brake (the sled falls over easier). The M8, on the other hand, has a direct drive system, which tucks just inches above the left driver, and has a low mounted brake. Through direct drive, efficiency is gained and weight is dropped. However, the low hanging alloy takes more effort to pick up and roll; not by a large effort, but by enough to be noticed. 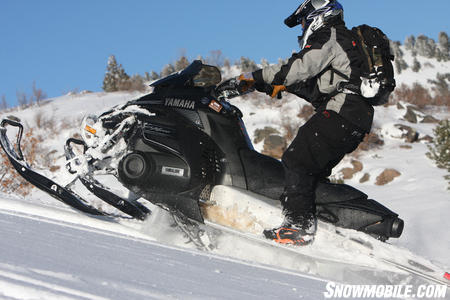 The Yamaha Nytro shows that it too can put its power to the snow leaving the skis dangling in the air.

Though the Polaris RMKs are easier to roll, the Cat’s Ms have better balance when slapping trees and ravines, due to the lower center of mass weight. There are trade offs.

Think of it this way, imagine an eight-inch diameter, 12-foot long metal pole, with a 50-pound square metal base. Push the pole over and it wants to swing back to center. Move the metal base up the pole’s shaft, and it becomes easier to tip right or left. This concept is true for snowmobiles. 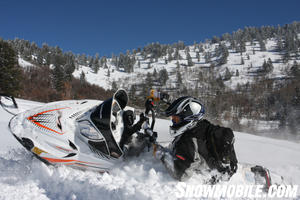 The M1000 proves time and again why it is still in a class of its own as it consistently pulled off some of the fastest times.

Furthermore, leverage is improved if the snowmobile’s steering post is behind and under the motor. The more vertical the lever, the easier to leverage weight; flat levers – laydown steering posts (over the motor) – are harder to use when leveraging weight. So, the winner for easy tip over is the RMK line.

Now on to turning radius. The 163 FX Nytro MTX had the shortest turning radius, due to its excellent ski, with aggressive keel, and by nature of having the most weight on its spindle. Regardless, all were within inches of each other.

Weight gain. This measure tells us how much snow hangs up on a chassis. This is not a constant as snow type, atmospheric temperature and moisture content in the snow, greatly affect this. But for our test day, in the conditions we had, freshly fallen moist, deep and unpacked, snow, the Nytro gained the most weight, by 71-pounds. The A-arms held much between its horizontal rods, the tunnel and the long wide runningboards too, held much. Now, for this snowmobile and the others, we do not know how much moisture the seats collected. Our hard working staff scoffs at snowmobile seats that are nothing more than overly large household sponges.

The 700 RMK gained the least weight. Why? We absolutely do not know. But overall, expect a snowmobile to gain 35- to 45-pounds by day’s end.

For the two-stroke spinners, much of a snowmobile’s success on the timed hillcross came down to driver ability and choosing that sweet line. Here too, the results help us form our horsepower vs torque vs. weight investigation, the M8 vs. M1000.  If you notice for these two, overall average time favored the M8, but only by 12/100 of a second. That, my friends is minimal. And, the diff here for the M1000 pilots comes by way of committing a bobble on the course. Result, no real clear king.

Now, looking at the M8 and Dragon RMK, the M8, with its greater horsepower, lighter chassis and exceptional track, narrowly eclipsed the RMK by three-quarters of a second. No clear and decisive door slamming here. 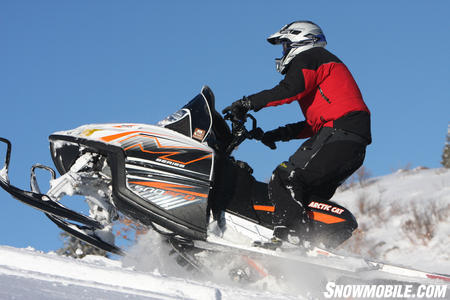 The M8 piloted by Kevin Allred has plenty of power to climb the hill with its skis in the air, during the up hill timed run.

Continuing, look at the 700 RMK’s time, it was quicker than its lighter and more powerful 800 Dragon. The only result we can muster from this is….track speed. Though the 700 RMK is heavier (weight is equal to the M1000) and has less HP to 800 Dragon’s HP, its lighter track (due to its 155 length), spun faster than the 163 Dragon, thus propelling the 700 to quicker uphill times. This is good knowledge to have when choosing a 160-plus length track.

For this timed hillcross and the uphill speed runs (discussed next), as the course became packed, speeds increased and ETs dropped; the first runs the sleds were breaking their own trails. Also, as the drivers became more familiar with the sled and the course, this too dropped the ETs. 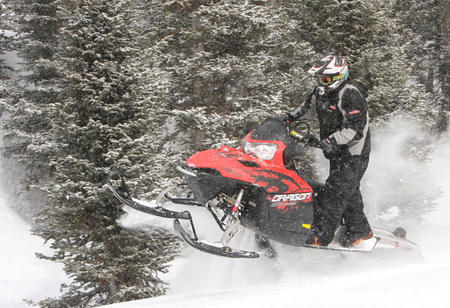 The Polaris Dragon 800 was one of the favorites through out the day. It was a constant performer throughout the day.

In Part Two of our Powder Sled Evaluations, we finish up our evaluations with a series of timed runs and give an opinionated and fact-based analysis of what we found. So stay tuned until next week.