Three seasons getting it very right

The first time we ever saw the Pro-Ride Polaris we made up part of a super-secret focus group with other writers, public relations people, engineers and the like. After agreeing to keep what we saw a state secret until after its public unveiling, we kept our outside the focus group thoughts to ourselves. At that time we thought the unique Pro-Ride sled seemed a bit strange. It looked big. It sat high. But it had promise.

That first impression came more than three years ago. Not long after the focus group gathering, we got to ride the real deal at a sled preview in the mountains outside Salt Lake City, Utah. Polaris had decided to showcase its newest snow vehicles to a group of snowmo-writers. The preview centered around a carefully selected 25-mile route that would highlight the benefits of the first Polaris Rush model. 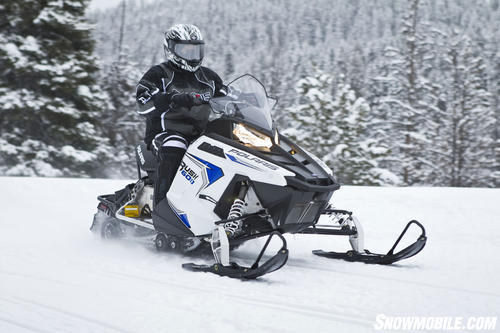 With the popular 600cc Polaris Liberty twin, the 600 Rush will suit a wide variety of riders from aggressive to sport cruisers.

Polaris supplied all the appropriate engineers, those who designed the outside the skid frame Pro-Ride rear suspension and could explain in technical and layman terms how the design worked and why it was better than any existing design of the time. Other engineers dealt with the thinking of using “glue” to bond some key pieces together and how it benefited lightweight durability and dealer after care. Polaris planned this introduction carefully and left nothing to chance. That’s how important the new Pro-Ride sled was to the company’s plan to regain market share from BRP and its oh-so-popular Ski-Doo snowmobile models, especially the MXZ line. 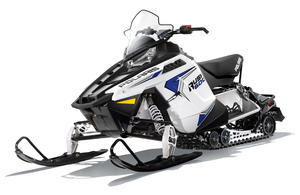 We took our time with Polaris’ new sled very seriously. We made four circuits of the test loop, choosing to ride it in four different styles. We rode it as hard as we could. We rode it like a weekend mileage rider. We slowed it down like a casual scenery checker. And we rode a combination of all four. The sled worked well and we were pleased with what Polaris had built. We specifically asked for a 600 Rush test unit so we could enjoy a season-long shake down.

That first winter Polaris’ Rush hit the snow as a 600. We had ours fit with some touring-oriented pieces. While it took us a few rides to get it set to our comfort level, we never became one with the sled. When we sat on it, the feel was incredibly similar to the latest MXZ. The ride in a straight line was better than what we could get from Ski-Doo’s SC-5. But, no matter how much we tinkered with the Rush suspension set ups, its cornering suffered compared to the MXZ. That seemingly higher ride height we had noted at the focus group intro threw us off. The skis popped in the corners. We didn’t trust the Rush as implicitly as we did the MXZ. 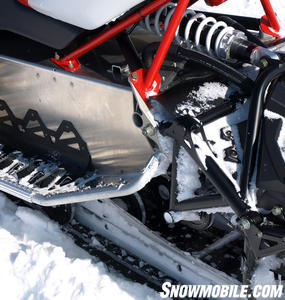 The next winter we upgraded to an 800cc Rush. It did all that the beloved Polaris 600cc two-stroke would do at low to moderate speeds. Being an 800, it had incredible muscle for aggressive corner exits and excellent power down the wide-open straights. Still, the added thrill of the 800 highlighted what we saw as Rush shortcomings.

Now, for 2012, we saw the latest Rush at a January 2011 sneak peek. The Polaris engineers glossed over the revamped front suspension upgrades and how the front shock in the third iteration of the short track Pro-Ride suspension has been relaxed a bit to allow the skis to plant themselves and stay planted — without that annoying popping up when you corner too aggressively. Polaris marketing was showcasing its new stretch track Rush series, the 136-inch tracked Switchback, and looked at the base Rush as old news.

Well, the 2012 Rush is not old news. It has become, in its third iteration, the Rush we had always felt it could be. And that means its pretty darn good now. The newest version of the Pro-Ride front end, which owes much to Polaris’ success in snocross racing, now lets the sled corner flatter with excellent control. Besides the enhanced and actual improved cornering, Polaris claims the sled enjoys 20 percent reduced steering effort. All we know is that the 2012 600 Rush exceeds our expectations and we’d rate it ahead of the comparable MXZ for cornering. 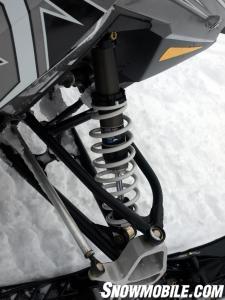 Polaris engineering arrived at an excellent compromise shock setting for the revamped front suspension on the base Rush series.

Much of the change can be attributed to the new stretch track Switchback. Polaris engineering reworked the Pro-Ride design to fit the longer wheelbase of the stretched out Rush chassis and the need to lengthen the slide rail underpinnings. In doing all that, the engineers revamped the front suspension as well, to make it responsive in matching the extended length. The end result is that the front-end changes necessitated by the Switchback designs actually greatly benefit the short track Pro-Ride Rush versions. Finally, the sport track Rush works likes we had expected it should. It took three iterations, but who’s counting? The Rush is right in 2012. It’s incredibly fun to ride. And we can readily recommend it as a true alternative to the MXZ series, even the early order ones with the rMotion rear suspension, which essentially gives you a Pro-Ride feel.

Three seasons ago the 600cc Polaris twin seemed just right. Its 120-plus horsepower remains an excellent choice for everyday riders looking for reliable sporting performance. Still, we would upgrade to the 800 powerplant simply because it does everything that the 600 does, but adds a higher level of go-power when you really want to get aggressive. 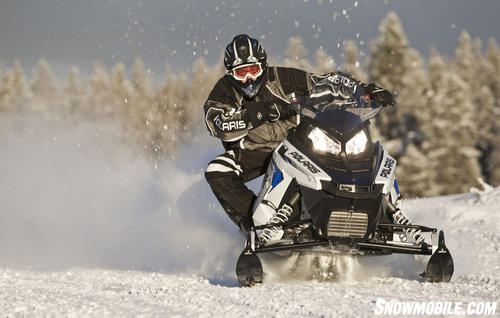 The 2012 Rush exceeds our expectations for handling ability in its third season.

While we think that the exclusive to Polaris Walker Evans shock packages give the Rush an incredible degree of ride adjustments, we could easily live with the shock package offered on the base Rush models. We may be very wrong here, but we tend to think that adjustability offered by the Walker Evans made the Polaris engineers a bit uninspired. They could choose a set of parameters that allow the consumer to fine tune the final settings. But, when it comes to the “base” shocks set up for the economy Rush, Polaris engineering worked much harder at getting a setting that gives great all around performance. We’ve noticed right from Year One of the Pro-Ride, that the non-Walker Evans units actually seemed extremely well suited for the average rider, providing supple action from low to moderate speeds and positive action at top end. And, still, the very nature of the Pro-Ride permits suspensions settings to be made on the outside of the skidframe rear suspension big shock. If you want to save some bucks and can admit that you are a serious rider, but not a big whoop banger, opt for the base model. Use the money you save by not getting the Walker Evans package and upgrade to 800 power.