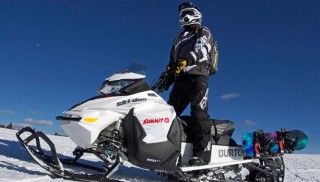 Ski-Doo refines Summit for snowboarder/skier use

However, in recent years an increasing number of skiers and snowboarders have come around to the idea that they are tired of paying US$100 or more for a ticket at a resort, only to ride slopes and trails that have been hammered by other skiers and boarders since the last snowfall. Now an increasing number of riders find it very appealing to access the backcountry terrain on a machine and ride almost wherever and whenever they please. These backcountry thrill seekers are accessing terrain that was almost only available to those who could afford the US$1,000-plus per day price tag to go heli-skiing. For 2016 Ski-doo and Burton Snowboards teamed up to develop the Summit Burton Edition.

Currently some of the “adventure” companies that were anti-motorized have seen an increase in sales to snowmobilers. That explains a recent trend of adapting some snowboarding and skiing products and accessories to work better for snowmobilers, who have responded by purchasing such products. Snowmobilers hope that a better view of snowmobilers will ease the pressure to close riding areas.

2016 Snowmobiles of the Year: Best of the West

In an effort to be more boarder and skier friendly, Ski-Doo joined forces with Burton Snowboards to create a machine that is both unique and stylish and introduced it as the all new 2016 Summit Burton. This sled was developed with assistance from Burton’s Pro riders, who worked with Ski-Doo engineers to develop a snowmobile that they believe will work for backcountry boarders. Ski-Doo was not the first to attempt to bridge the gap between boarders/skiers and snowmobilers. In 2003 Yamaha teamed with DC snowboarding and assembled a package with graphics and racks for some of its Pro riders. In 2005 Arctic Cat joined with Atomic and did much the same. Cat created custom Arctic Cat-Atomic graphics and made a custom billet aluminum dual board rack. These sleds were also used by the Pro riders and accompanied them to Atomic snowboarding events. Ski-Doo is, however, the first to offer this package to the public. Ski-doo added a snowboard rack to the LinQ system that attaches to the rear tunnel and can accommodate one snowboard or two skis and two poles.

Rack – Ski-Doo started with a standard 2016 Summit SP 154 and began refining it for snowboarder/skier use. Incorporating its unique LinQ system, Ski-Doo created a rack that will accommodate one snowboard or two skis and two poles. The LinQ rack mounts on to the side of the rear tunnel. It can easily be installed for hauling a snowboard or be removed for backcountry snowmobiling, depending on what the user wants. Equipped with a ratchet strap to secure the snowboard/ski to the rack, the ratchet system is much like what you see on snowboard bindings. The rack can also be paired with other accessories like backpacks and fuel cans. While this is a standard feature on the Summit Burton, the rack is in the Ski-Doo accessory catalog and will fit on any REV-XM chassis as well as the REV-XP chassis. It is possibly the best part of this innovative Summit package and can be fitted to all track lengths from 146 to 163 inches. The rack retails for US$329.99. The LinQ rack uses a ratchet strap much like a snowboard boot binding to attach the board to the rack.

Seat – Another feature of the Summit Burton that makes it stand apart is its two-up mountain seat. Developed by Ski-Doo for the “Burton,” it’s the only one we know of. The seat puts the driver in front with the passenger in back holding on to the strap. It’s a REV-XM mountain seat but stretched to accommodate the second rider. Ski-Doo kept the same light weight features in this two-up seat as in its regular XM version. Although Ski-Doo claims the seat is “low-profile,” it is similar to the average height of most snowmobile seats. Ski-doo developed the only two-up seat that exists in the mountain segment. It has a strap in the middle so the rider in the back has somewhere to hang on.

Graphics – The graphic package is unique to the Summit Burton, carrying a bold Burton Logo on the tunnel. For 2016 the Burton Edition only comes in white.

Summit SP – Except for the specialty items unique to the needs of skiers and boarders, the Summit Burton is built on the standard Summit SP package. Ski-Doo chose only to offer the Burton edition with a 154-inch track, which is the Summit SP’s standard PowderMax track measuring 2.5 inches tall by 16 inches wide. The 154-inch track is a good all around track length – not too long, not too short – and will work very well for the average snowmobile rider. Power-wise the Burton edition is only offered with the 160-hp 800 E-TEC engine. The Burton comes standard with HPG shocks.

Intended Use – The use of snowmobiles by skiers and snowboarders has been going on long before Ski-Doo introduced the Summit Burton. As mountain sleds improved and actually became truly mountain sleds (instead of long tracked trail sleds), a few in the non-motorized community began to see the benefits of owning a snowmobile to access the backcountry rapidly and easily. The number of non-motorized users that have decided to purchase a snowmobile to access the backcountry has steadily risen. It is a growing niche that is expected to increase with new products like racks and new techniques for going into the backcountry with two people on one snowmobile. 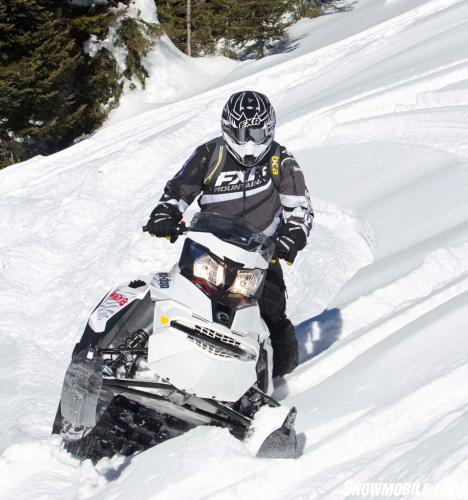 Even with the snowboard attached to the rear tunnel it never really affected the maneuverability of the snowmobile.

One issue that we see is that rarely do users mount one set of skis or a single snowboard to their machines. When two people ride on one machine, there is a need for another rack to carry an extra snowboard or skis, or the lone rack must be able to carry two sets. Since the LinQ rack is designed to carry one set, riders must purchase another rack or figure out a way to carry another set.

From what we have seen in the backcountry, boarders and skiers are currently using snowmobiles that are about 10 or more years old and cost $3000 or less. They are in the backcountry to board or ski, making the snowmobile a means to an end. These snowmobile users view the snowmobile as transportation with perhaps a small fun factor, but their whole reason for being in the backcountry is to board/ski. We see this when we pull into a parking lot and there is an early 2000 Subaru Outback with the rear suspension sagging pulling a $300 trailer with a couple of 10-year-old mountain sleds. This setup works for them, and they do not need the newest snowmobile to accomplish their task. In many cases boarders/skiers make their own rack to haul their board/ski, or the rider simply holds them while the other drives the machine. With this being the current reality and relationship between boarders and sleds, it’s a tall order for the average backcountry boarder/skier to pony up the US$12,549 for a 2016 Ski-Doo Summit Burton, no matter how versatile it may be. We anticipate the Summit Burton will be utilized by ski resort companies that need to access more difficult terrain away from any groomer tracks. Rental companies will also add this to their line of rental sleds so that they can attract more customers.