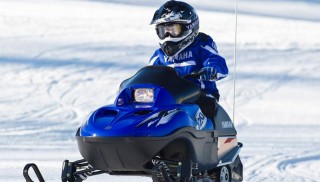 How do you like your 120cc kid sled? As a blue Yamaha of green Arctic Cat?

So you stopped in at a combination Arctic Cat and Yamaha snowmobile dealership and noticed how similar the two kid sleds looked. You had to ask whether or not Arctic Cat’s green Sno Pro 120 was a knock off of the Yamaha SRX 120. Other than Yamaha blue and some SRX graphics, the two sleds could be twins. And, they are.

In a cooperative effort between Yamaha and Arctic Cat, the two companies set aside marketing rivalries and decided to consolidate and share engineering expertise. The engine is Yamaha’s contribution, while the remainder of the sled comes from Arctic Cat. Well, mostly that is. Each company brings its own particular style to the finished kid sled. Arctic Cat’s Sno Pro 120 is the heir to Cat’s all time classic mini-sled, the Kitty Cat. The new version dropped the two-stroke powerplant in favor of a cleaner, more earth-friendly four-stroke single. With engine options available from all manner of suppliers that build low power four-strokes like Honda, Robin and Briggs & Stratton, Arctic Cat chose to go with Yamaha. With the chance to supply power to one of snowmobiling’s most iconic kid sleds, Yamaha decided to use the opportunity to create a youth sled of its own under the guise of its own iconic brand name, SRX.

Both sleds give parents a low horsepower option to bring their kids into the snowmobile family. With a displacement of 123 cubic centimeters from a bore and stroke of 56mm by 50mm, the diminutive single cylinder engine can be contained via a governor, the training wheels of youth snowmobiles, to keep top speed to 8 miles per hour. The young operator will appreciate the easy throttle pull of the spring-assisted butterfly carburetor. Parents will like the influence of the band-style brake.

Whether you opt for the green Arctic Cat Sno Pro 120 or the Yamaha blue SRX 120, rest assured that either model will provide hour after hour of reliable action for your young snowmobiler. The Yamaha motor will only stop when the sled’s half-gallon fuel tank runs out of 87-octane gas. The kid-grip starter handle has a relatively easy pull, allowing the young operator to restart the sled after a hot chocolate pit stop.

To make it a Yamaha, the SRX 120 comes in blue with heritage Tuning Fork decals and special simulated gauge decal.

We fully appreciate the need to create some marketing separation, but it will be interesting to see how this “same-but-different” two-in-one sled design fares on the kiddie racing circuits. You know that these two models will face off, after all, that original Kitty Cat established a series of kid races that included a showdown at the famed World Championships at the Eagle River Derby. Which will be the more competitive mini now? The Cat Sno Pro or the Yamaha SRX.

Regardless of choice, know that the basic design includes double A-arm front suspensions and a slide rail rear setup. Arctic Cat calls its front end an AWS, but be assured that it’s the same for either the Cat or Yamaha. There’s a basic hydraulic shock on the A-arms to control the three inches of vertical travel. A safety tether will stop the engine if the rider comes off.

The shocks and A-arms control plastic skis, which keeps front end weight to a minimum and which makes steering easier for the young operators.

At the rear you’ll find a parallel rail slide suspension that utilizes torsion springs with preload adjustability. The design provides upwards of 4.5-inches of travel, which will work just fine for the sled’s level of performance. Consider that amount of suspension travel matches the available cushion of sleds built in the 1980s and which had much more straight-line performance. Spinning around the slide rail is a narrow 10-inch wide by 68-inch long rubber track with a half-inch lug profile.

Styling-wise the basic sled resembles the older, pre-ProCross bodied Arctic Cats. Note the smooth curved areas around the A-arms and rear kick-up of the runningboards. The hood resonates Arctic Cat Crossfire with low profile windscreen. The seat offers a racy style, complete with rear storage in the bun. Despite the fact that the sled starts out as an Arctic Cat youth model, Yamaha stylists performed a masterful job in making it their own. Yamaha’s blue replaces Arctic Cat green, but the SRX 120 also gets well placed graphic trim to create a similar but uniquely Yamaha appearance. In addition to the heritage tuning fork badges on the hood, the SRX 120 also features a decal that simulates big sled gauges. Yamaha is quick to point out that the SRX 120 design came from the designers that gave the grownups the blue Nytro performance models. Young riders gain confidence and experience riding on their own with youth sleds like the Yamaha SRX 120.

While youth sleds don’t give either snowmobile manufacturer huge sales numbers, the youth concept is viewed as important because it helps point young riders to the brand. Yamaha has long offered youth-sized dirt bikes with the expectation of establishing brand loyalty at an early age. Both companies hope the idea resonates with today’s young riders. And, the two snowmobile manufacturers see the sleds as creating and maintaining the idea of snowmobiling as a family sport.