It’s called pow pow, or simply, pow. If you like riding in the powder, then you know what I mean. Yamaha has given you pow pow hunters reason to get your powder hunting license and go at it. Going deep with the 2014 Yamaha SR Viper XTX SE, a new crossover snowmobile from Yamaha, is taking advantage of Yamaha’s proven four-stroke technology in its new SR Viper Chassis, which will be familiar as it’s the ProCross chassis from Arctic Cat.

Crossover snowmobiles deliver winter fun in two ways, (1) trail comfort and control, and (2) deep powder-in-the-meadows finesse. Crossovers have gained, and continue to gain much popularity over the trail-specific short trackers, due in part to an aging rider population. A crossover’s longer rear suspension, 20- to 10-inches longer or more than that of the 121-ish to 130-ish snowmobiles, provides a more plush, less choppy ride, due to the fact the longer rear skid frame glides over many more moguls, rather than falling into them like the short tracks.

There has been much written about the technology- and product-sharing venture between Yamaha and Arctic Cat. Wade West, Media Relations Manager for Yamaha Snowmobile, USA, told Snowmobile.com “Though Yamaha and Arctic Cat have entered into an agreement to share some technology, whereas Arctic Cat purchases Yamaha’s 1049 motor, and Yamaha purchases Arctic Cat’s ProCross chassis, the two companies will remain separate and distinct companies.” This statement became highly apparent when we chronicled Arctic Cat’s XF 7000 Cross Country. 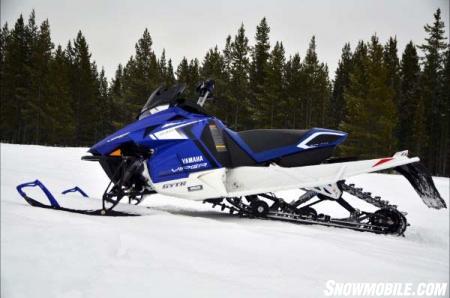 The SR Viper XTX SE chassis, a two-piece design, shows off long-swooping lines that are clean and compliant for trail and deep-powder meadow use.

The SR Viper XTX SE shares the same motor as Yamaha’s other crossover snowmobile, the FX Nytro XTX – XTX is the label for all Yamaha’s crossovers. The motor, the grunt-filled four-stroke three-cylinder, 1049cc high-performance Genesis, is a one that has a solid history of dependability and fits nicely in the SR Viper XTX; literally a turnkey motor. 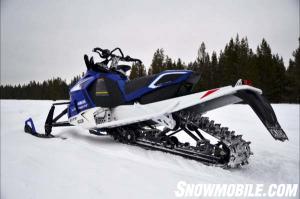 The 15-inch wide, 141-inch long Camoplast Cobra track with 1.6-inch lugs provides plenty of bite for the trails. The long skidframe makes choppy trails comfortable.
The SR Viper XTX is intended to give Yamaha a new image, one that is aggressive. Yes, the SR Viper XTX looks similar to Arctic Cat’s XF 7000 Cross Country, but it is different from the Cat product in that Yamaha uses its own YVXC drive clutch. Yamaha likes it clutches to hit hard out of the hole and rail up the horsepower and torque curve with voracity. We found the SR Viper XTX, when on the trail, would transfer its power quickly when ripping out of a sweeping corner, the back end would wash and the XTX would side slip then gather up its legs and align with the trail. Yet, the clutch weights and springs seemed to lock down the motor’s long legs. We don’t hold that against the test unit since we know Yamaha at the time was working through its clutching, as the SR Viper XTXs were prototypes.

For years we at Snowmobile.com have ridden the FX Nytro MTX and XTX and we know the motor runs fast as it stretches out, but for this time, the Viper XTX seemed to drop off, which was uncharacteristic. 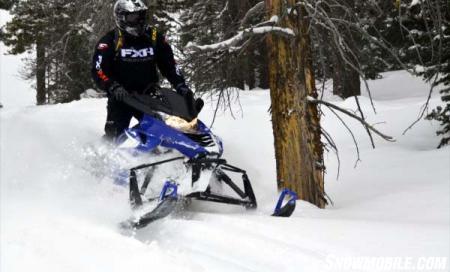 Going off trail with the Viper XTX SE is a joy. However, the XTX’s limitations must be understood, as its under-two-inch-lugs can cause the XTX to trench.

When we took the SR Viper XTX to the backcountry, we found the 1.6-inch track to be sufficient for some mildly deep snow, but it could use some taller lugs. The SR Viper XTX would do well with a 1.75-inch track – it has the power. With the shorter lugs and bottom-end hard clutch hit, it would blow out its track. The chassis is designed for good flotation, and we feel a mellower engagement and taller track would benefit the crossover rider who yearns for deep powder and more backcountry exploring. 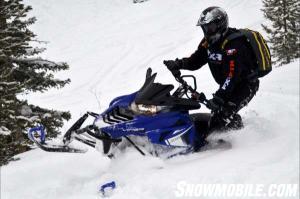 Test Rider, Kevin Allred takes the Viper XTX through some Montana deep powder.
Yamaha has the best powder ski on the market. We encourage Yamaha to place it on the XTX. The ski on the prototype XTX we rode was Cat’s own ProCross ski, which we just can’t warm up to. So, Big Blue, utilize your MTX ski, it will help the XTX’s boondocking.

The Viper XTX has great ergonomics. Its seat-to-handlebar feel and reach are superb. The seat is long enough to stretch out on and has just enough grip to tie the rider down, but not so much to prevent the rider from positioning on the seat for right- and left-turn cuts. The windshield and hood provide good wind protection and move the snow around the driver when plowing the deep. The Viper XTX’s runningboards are stiff, appropriately sized for a heavy boot, and they do evacuate the snow. The Viper’s platforms are a vast improvement other the boards on the Nytro XTX where its snow evacuation holes are not as large.

We like the bold colors, the solid blue and red. The blue, Yamaha’s traditional color is appealing, but the brash solid red Viper XTX really stands out as an image-maker.

When we rode the SR Viper XTX, we did not feel we were on an Arctic Cat-supplied and Yamaha-purchased chassis; we felt like this was all Yamaha. Anyway, this feel came from the familiar power and sound from the Yamaha 1049. Its unique hum and Yamaha’s method to clutching – hard hit – and Yamaha’s approach to shock compression and rebound, the Viper XTX had Yamaha’s fingerprints all over it. 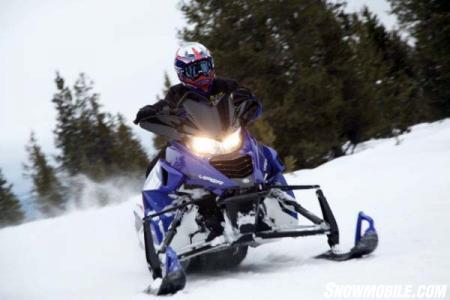 The XTX hit hard on the bottom, lifting the skis, but its oomph mellowed down in the high RPMs. The XTX cornered well, thanks to its tall spindles and aggressive trail ski.

The SR Viper XTX’s shocks were set to be stiff. It was dialed in for choppy trails with harsh flat top moguls that challenge rider and sled. The SR Viper XTX performed best when rolling through the junk at half throttle where the SR Viper chassis skipped the tops. If slower, the SR Viper XTX would fall into the holes and the stiff shocks would feed the highs and lows up through the handlebars. But, as you know, shock pre-load and valving can cure this – it’s always smart to be a tuner and prep your sled for body weight and riding style. For this day as we rode the XTX, with ample throttle the XTX would smooth out and glide over the tops.

The Viper XTX has controls off-trail use include a protected kill switch, high-med-low heater hand- and thumb-heater controls, and mountain strap on the center post. 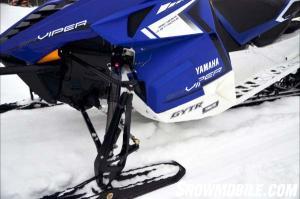 The stretched wishbones and tall spindles give the Viper XTX its nail-down on the trail. The Fox FLOAT 2 shocks, its 10-inches of travel, and adjustable 42 -43-inch ski stance give the rider confidence when bruising the trolls that fill a trail.

The SR Viper XTX chassis is a two-piece tunnel made up of an inner- and outer-formed shell with a boxed support structure to make up the two-piece tunnel. This gives the chassis strength. The tunnel is also tapered – tear drop style – from front to tail, giving the snowmobile a skinny feel for the rider. This helps the Viper XTX propel through the deep snow. Continuing, the chassis uses triangulated spars that increase rigidity and reduce chassis weight over that of the FX Nytro.

The SR Viper XTX’s front suspension, with tall spindles is known as SRV. It uses Fox FLOAT 2 shocks and has up to 10-inches of travel. Ski stance is an adjustable 42-43 inches. The rear suspension is known as Dual Shock SR 141, where it uses Fox Zero Pro on the rail’s front and a Fox FLOAT 2 on the rail’s rear. Travel is reported at 14.5-inches. The Camoplast Cobra track is 15-iches wide, 141-inches long with lugs that are 1.6-inches, as earlier stated.

If you are considering a crossover snowmobile, then here is a solid choice. The Yamaha 1049 motor is a reliable three-cylinder electronic fuel-injected four-stroke that delivers 135 sea level rated horsepower. It is a motor that requires very little attention.

The chassis has proven itself in the Arctic Cat XF Cross Country line and has no bad habits. 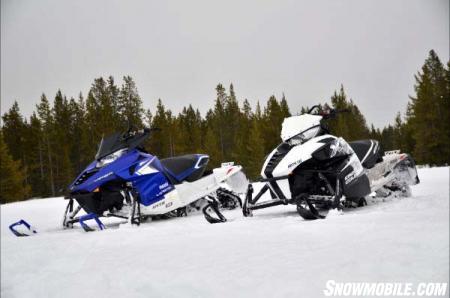 Cousins, one may say, the SR Viper XTX from Yamaha and the XF 7000 Cross Country from Arctic Cat. Though similar in motor and chassis, the two have distinct personalities that reflect their corporate mission.

We figure by the time the SR Viper XTX hits the showroom floors, Yamaha will have its drive and driven clutches properly set for this chassis, as it is wholly different from the FX Nytro XTX. Yamaha is a company that has a heighted sense of quality control. Also, ask your dealer to set up the shocks to your riding style, this makes the sled uniquely yours. Lastly, for me, I would change out the ski for Yamaha’s powder ski; that’s just me as I am a deep pow pow rider.

The technology transfer between Yamaha and Arctic Cat is a win-win here. When Suzuki and Kawasaki hooked up to share tech on their off-road dirt bikes, the companies’ four-stroke models jumped forward in quality and customer appeal, the same will be true here, I believe. We live in a global market, and the snowmobile world across the vast Pacific Ocean and the plains in the Midwest have joined together. That means for you, a blue or red SR Viper XTX that is a blend of American get-er-done with Japanese patience for quality. Thus your pow pow crossover experience will be get-er-done, but patiently. 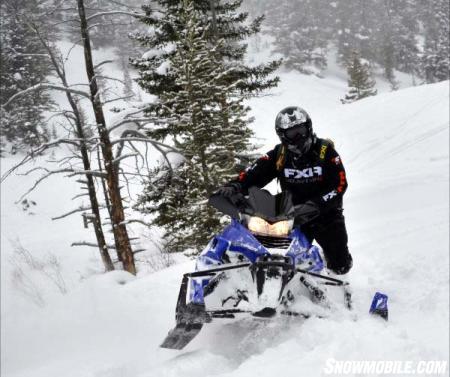