Boosting Power in the Yamaha Viper 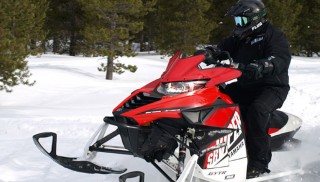 Yamaha doesn’t have a lightweight two-stroke to compete with the likes of Ski-Doo’s 800 ETEC, Arctic Cat’s Suzuki 800 or Polaris’ new Cleanfire 800 HO. They do have a four-cylinder four-stroke with competitive power, but it’s not what most riders want sitting over their skis. How do you get around this issue? Arctic Cat, which has a very good and powerful Suzuki-built 800 two-stroke, upped its own ante by turbocharging the family-friendly one-liter Suzuki four-stroke twin that it uses in most of its moderately powered models. Boosting that four-stroker turned it into one very powerful trail Cat with 177hp and 121 lbs/feet of torque. Still it remains a somewhat nose heavy powder runner.

So what have we here? Yamaha has a very good, 135 horsepower one-liter four-stroke triple that its uses in its Viper MTX, but it has to run up against two-stroke 800s and even a turbocharged deep powder Cat. While early reports of the Viper MTX with the base normally aspirated engine have been good, the Yamaha triple is no match for the Ski-Doo 800 Summit, although it does compete with a Polaris 600 RMK. What does Yamaha do for a power runner in the mountains? The company’s answer for getting more power is the same that Arctic Cat discovered – turbocharging the four-stroke. 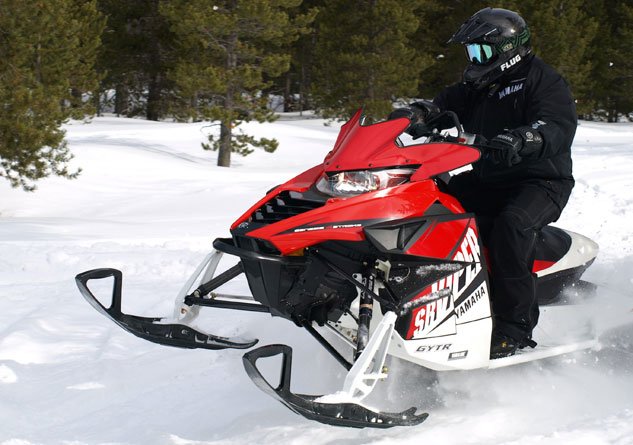 By opting for the trail turbo accessory kit, Viper riders can add 45hp, taking a stock Viper from about 135hp to 180hp. That’s less than US$75 per added horsepower.

There is a major difference between Yamaha and Arctic Cat, though. Cat will dare to try something a bit different like a turbo and get it to market much sooner than Yamaha would. They will study predicted life cycles of the proposed engine, what failure rates they can expect and take a calculated gamble. Remember the Arctic Cat T660 turbo models? Never one of our favorites for pure trail enjoyment, they did skedaddle in a straight line, but were heavy steering. Despite some serious boost, more than twice the nine pounds of boost in a modern turbo Cat, the engine lived. That was in spite of Suzuki’s refusal to warranty the engine at that much boost. Yamaha would be in the same conservative camp. Or, would they? 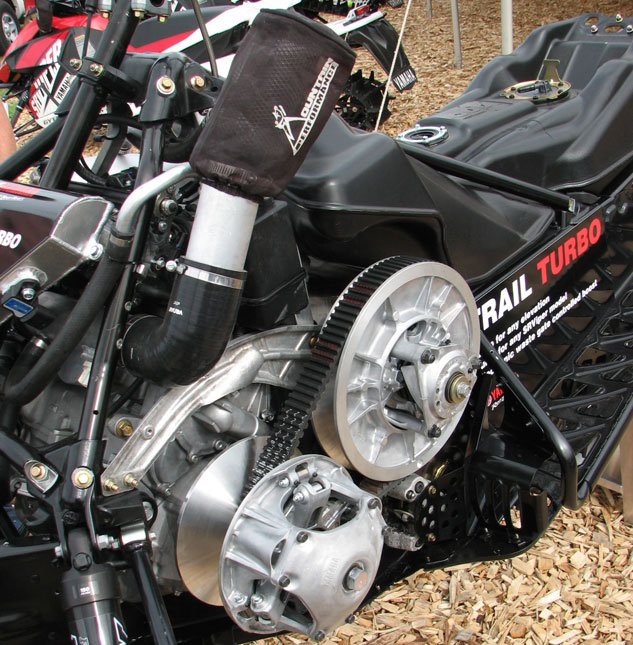 “We are bringing the kit to market at US$3,299 MSRP, which makes it significantly less expensive than its competitors,” notes Yamaha marketing manager Wade West.

If all this sounds a bit familiar, it should. Adding boost is something that Yamaha did in the last season of the Nytro series and is doing with mountain-specific Vipers. Since MPI, the aftermarket supplier of the mountain turbo kits, got the turbo to fit into the Viper MTX chassis, getting a turbo to fit in a trail Viper was do-able. Of course, in 2012 when boost was added to the trail models of the Nytro, Yamaha opted for a supercharger solution. Now the company has chosen a turbo.

While we understand fully the benefit of pushing power in deep snow areas where horsepower matters, will boosting the trail Vipers be as popular?

The key thought is that for four-stroke engine builders to build performance, they need to explore the viability of turbocharging. Yamaha’s 1000cc four-stroke triple without boost maxes out at 130-something horsepower. Adding a conservative – and Yamaha is conservative – five pounds per square inch of boost gets you turbo Cat numbers. The Suzuki engine lives, so it can be done. 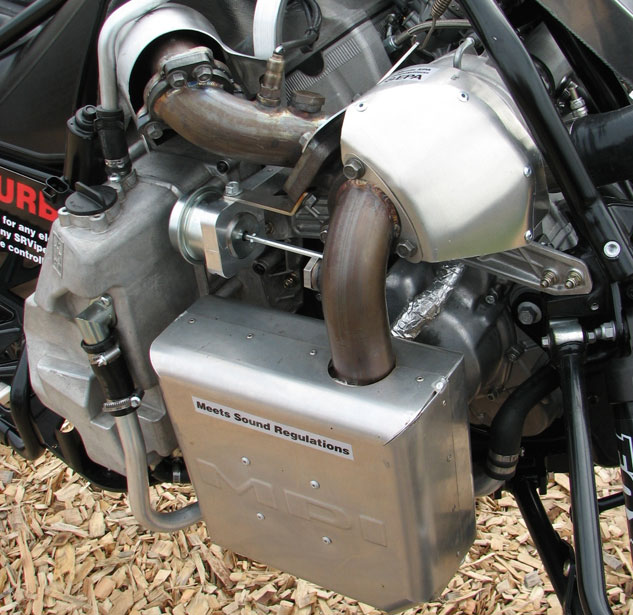 An obvious change with the turbo kit is replacement of the stock suitcase-sized exhaust with a smaller canister. Yamaha claims that the turbo-equipped Vipers meet all sound and emission standards.

The actual numbers coming out of a boosted Viper matches the power output seen from the powered-up Nytro. But, instead of going with a turbo on the trail models, in 2012 Yamaha released a Trail Supercharger as its low-elevation, bolt-on, premium pump-gas upgrade for the Nytro. The supercharger used a 5 PSI boost and added the same instant 45 horsepower over stock. What you get is a power uptick to about 180 horses.

With the supercharged project, Yamaha insisted that the kit be designed and engineered to provide quality fit and finish with no modifications to the Nytro’s hood or side panels. All wiring had to use stock-style connectors, thereby eliminating cutting or splicing the wiring harness. The 2012 kit included a tunnel-mounted auxiliary cooler, a set of accessory ice scratchers, and all necessary clutch and gearing calibration components. It also carried a one-year limited warranty from the manufacturer and retailed for US$4,399.95. Priced US$1100 less than the 2012 supercharger kit, the new Trail Turbo kit is quite a bargain.

Although Arctic Cat adds turbocharging to stock production sleds, this aspect of a factory adding performance to production sleds remains rare. Turbocharging to gain performance from “undersized” engines is almost taken for granted in the auto industry. Fiat boosts its 500 series basic 1.4 liter 101-horsepower four-cylinder to 135hp in its 500 Turbo and up again to 160hp in the performance Fiat Abarth model. The Abarth turbocharger stuffs air into the cylinders by spinning upwards of 230,000 rpm as it boosts output to an estimated 160 horsepower. The Abarth system is rumored to use boost that peaks at 18 psi. 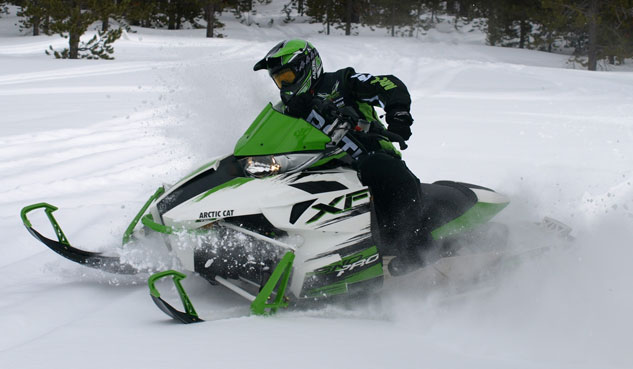 Arctic Cat provides trail and powder riders a choice of a powerful 800cc two-stroke or a 177hp turbocharged Cat models.

Chevrolet’s Cruze features a turbocharged 1.4-liter engine that runs about 16 PSI of quick spooling boost to give the “city” car good first to third gear acceleration. Car reviewers note that once the low-end torque runs out there’s not much left for on highway passing power.

Subaru’s WRX offers high performance featuring a turbo boost up to 13.5 PSI. Gaining performance via turbocharging is hardly a new concept. One of the “big” powerplants in the truck industry is Ford’s turbo EcoBoost V6, which is claimed to pull with the power of a V8. Future cars from Ford and Volvo are expected to showcase one-liter triples for their “city” cars of the near future.

One main advantage of turbocharging is utilizing instead of wasting thermal energy through the engine’s exhaust. That energy is used to boost engine power by having the exhaust gases drive a turbine to pump fresh air into the cylinders, resulting in a greater mass of air entering the cylinders on each intake stroke. The bottom line is that a smaller capacity engine can deliver power comparable to bigger normally aspirated engines. To create faster and higher flying fighters and bombers in World War II, warplanes used turbos and superchargers. Racing cars used turbocharging, most notably in Formula One during the “Turbo Era” that began in 1977 and ran until 1989. Those small 1.5-liter racing engines delivered upwards of 1500hp! 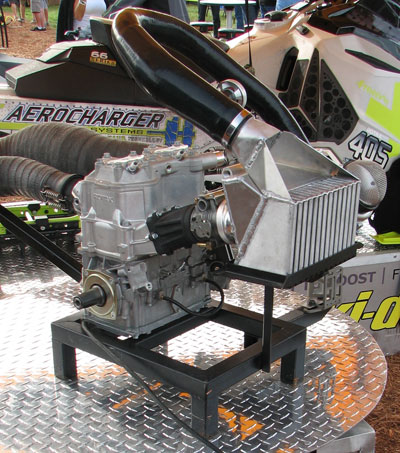 Aerocharger worked with Ski-Doo to fit a turbo system to the Rotax 800 ETEC, which can register 240hp at only 7PSI. The Aerocharger system can be set to produce up to 300hp.

It’s easy to understand the appeal of power boosting engines for added sled performance. Hill climb racers on the Rocky Mountain circuit fit Ski-Doo’s two-stroke 800cc ETEC with an Aerocharger turbo system to make 240hp at just 7 pounds of boost. Turbocharging as an option has appeal when you recognize that an aftermarket ‘Stage 1” kit with 11 pounds of boost pressure for a 500cc Yamaha Phazer can get power up to 140 hp. A four-cylinder Yamaha Apex motor on 10 pounds of boost can go to 240hp! Those may be extremes, but if you casually estimate that one pound of boost can be worth 10 horsepower, well, do the math and figure what a modest 5 PSI boost bump can do for your sled. With the MPI Viper Trail Turbo accessory kit it’s worth 45 added horses that cost less than US$75 apiece.