Half a century of good times and some lean snows

One of the good — maybe it’s bad — things about having been involved as an editorial observer of the snowmobile industry since the early 1970s is that much of what we see today has been played out in the past. In the early 1980s the snowmobile business sought magic formulas to regain sled sales. In the late 1970s, sled sales were at 226,000 units, but by 1992 had fallen off to 150,000 units. In the 2010 industry report, sales totaled less than 112,000 units worldwide. Of course, we should expect to see an up tick for the current season thanks to a snowier winter season across much of the North American snowbelt. Again snowmobile manufacturers look for answers to renew sales interest.

We figure that in the 50 years that Arctic Cat has been around, the Thief River Falls, Minn. company has seen it all. Often more than once. As Arctic Cat prepares to celebrate its 50th anniversary this August, we take the opportunity to look at how this pioneering company has evolved through its product and managed to capture a following that rivals that of Harley-Davidson motorcycle enthusiasts. Currently Arctic Cat is bringing some serious all-new product to market and seems to be stirring up some well-earned excitement for the brand, despite the sales numbers. 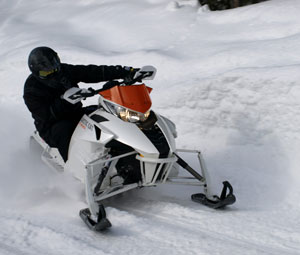 The modern “next generation” F1100 Turbo built around the Procross chassis is the most nimble, best handling big Cat in Arctic’s 50 year history.

The new Procross and Proclimb platforms give Arctic Cat loyalists gloating power they haven’t had since the light and fast Firecats. Don’t think this isn’t going unnoticed by the competition. Expect some anti-Cat reaction to hit the snows in the next couple of seasons. But expect Arctic Cat to continue building excitement as the company unveils its own Arctic-built snowmobile engines over the next few seasons. We’d suppose the new motors will showcase hemispherical heads just as the ATV motors have. And we suspect that Cat will lead the way with at least one high performance four-stroke. Since Arctic Cat has little fear of turbocharging to get power out of a one-liter four-stroke, we suspect that turbos will continue to play a role in future Arctic Cat models. Plus, Arctic Cat with its F1100 Turbo is demonstrating that you can have a high horsepower four-stroke engine in a sled that handles and is comfortable on the trails.

While Yamaha proved that four-stroke snowmobiles could perform and didn’t have to putt-putt along like a lawn tractor, Arctic Cat is proving that four-stroke sleds can be nimble handlers and feel light on or off the trail. We expect more from Cat as the new breed kicks off the next 50 years of Arctic Cat history.

Just 13 years ago Arctic Cat reported its 15th consecutive year of increased retail sales of snowmobiles. Interestingly this came about at a time sled sales proved tough as it was the first time since 1991 and the second time in the previous 15 years that industry-wide sled sales decreased. Arctic Cat sled sales of the period actually saw market share grow by 13 percent.

At the time, then Arctic Cat president Chris Twomey noted: “We attribute the soft snowmobile market to substantially lighter than normal snowfall.” That was back when decreased snowfall was blamed on “El Nino” weather patterns. 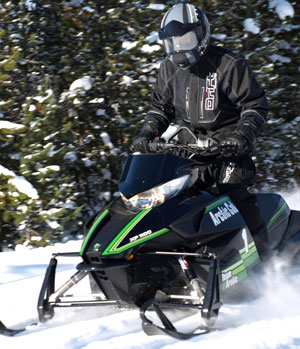 When Arctic Cat introduces sleds with its own Cat-built engines, we expect four-stroke power under the hood like this XF1100.

Sled sales led Arctic Cat as the company was fighting to stay relevant in the personal watercraft market with its Tigershark line, which represented only seven percent of total company sales. Arctic Cat’s ATV product was just underway and wasn’t making a major contribution to sales. That’s changed as sled sales represented 36 percent of the company’s fiscal sales in 2010. ATVs represented 42 percent. Of course, ATVs can be sold in places where it doesn’t snow — like Arizona or the Middle East.

Despite that somewhat rosy outlook back in May 1998, Arctic Cat realized that its dealers would enter the next season cautiously and expected sled orders to be as much as 13 percent lower than the previous year. Snowy winters breed enthusiasm at all levels, dealer and consumer! Sound familiar?

Times have been tough sled sales-wise before the 1990s El Nino. For instance, in 1983 the snowmobile industry addressed its concern about sales growth by gathering for an economic summit, the Economic Conference of the Snowmobile Industry. One of the leading snowmobile publications of the time designed and conducted a market research report. The purpose and scope of this contributed report “…was to determine the current attitude of snowmobilers toward buying a new snowmobile and what, if anything, would motivate them to do so.”

According to the International Snowmobile Manufacturers Association (ISMA), today’s “average” snowmobiler is 44 years old with an annual household income of $68,000, which represents $31,000 in 1983 dollars. It would seem that the “average” snowmobiler’s income is somewhat constant; of course, a gallon of gas was about $1.24 back then. That would be about $2.74 in current dollars.

So, we think things are strained today? Maybe. But in 1999 the hottest Arctic Cat was the 172-horsepower, 999cc, case reed, triple-cylinder, two-stroke Thundercat. Would you really rather ride that sled that had a 1999 retail price of about $9,500 (approximately $12,500 in 2010 dollars) or a new 2011 F1100 Turbo for $13,300? When you look at the 50 years of Arctic Cat snowmobiles specifically, even in today’s money, you have to know you’re getting pretty good value. So, while times are tough, what’s new? That’s the advantage — or the curse — of having been around this business for a while. There have always been challenges of one kind or another. For us, we’re looking forward to watching Arctic Cat amp up Thief River Falls this August. It’ll be a rockin’ time as 50 years worth of stories flow thick and fast at the Black Cat tavern. See you there!