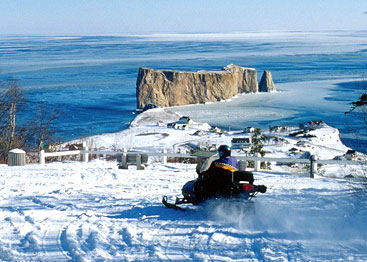 Going east late in the season

There are very few places on this continent where you can park a snowmobile, stop the engine, walk twenty feet on the beach, remove a glove and touch the salted water of the ocean. And those very few places are probably all in Gaspesia, the impressive peninsula guarding the entrance of the St Lawrence estuary in eastern Québec.

It’s quite special but one must admit that touching salted water isn’t something the average sledder has in mind when he considers a new destination. No reasons to worry, this isn’t all that this great region where you may ride the trails or track the bowls until late March or early April has to offer.

For many, Gaspesia may not be next door. From Toronto, Ontario, reaching Mont-Joli, the western gateway of the area on the St Lawrence estuary, requires over twelve hours on driving. Hartford, Connecticut is eleven hours away. But from Boston, Massachusetts, you can reach a southern entrance, Pointe-à la-Croix and the bridge over the Restigouche River separating Québec from New Brunswick in a reasonable nine and a half hours. Portland, Maine is seven and a half hours away, Halifax, Nova Scotia requires a six hours drive while Moncton, New Brunswick is a few steps away at three and a half hours. Is it worth all this travelling? You bet! 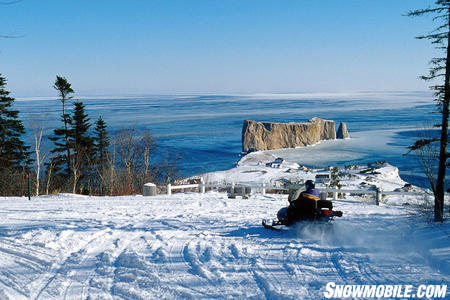 Sitting in the ocean, the famous Percé Rock seen from Mont Sainte-Anne.

Just because you can ride your sled to the beach doesn’t mean this region is at sea level or flat as a cornfield. There are impressive cliffs all along the shores and occupying most of the peninsula’s center, some quite impressive mountains: the Chic-Chocs range where Mont Jacques Cartier, the highest peak, displays a decent 4,160 feet of elevation. In fact, 25 of Québec’s forty highest summits are part of this range. By the way, Jacques Cartier was the explorer who discovered the area in 1534, casting anchor in the bay of Gaspé and claiming the land for the King of France. 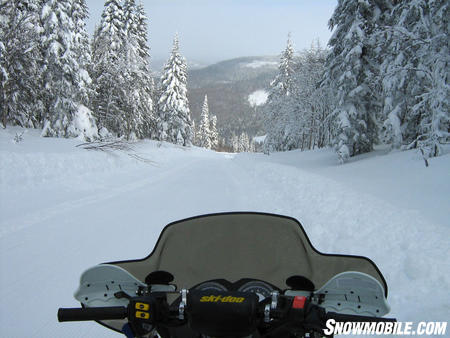 At the bottom of Val D’Irène ski resort, on trail #5 near Amqui.

If you plan on riding in Gaspesia, there are three numbers to remember: 5, 595 and 597. These numbers identify the main trails, in fact the only Trans-Québec and regional trails on the peninsula. Only three, but they are quite something. First, trail #5 is a perfect loop, 1,250 km (776 miles) long following the north, east and south shores before heading to the north along the Matapédia River valley. In this area, a stop to overlook the surroundings at Val d’Irène ski resort (near Amqui) is a must. The rider who plans this trek must secure five days for the whole ride at a good pace; six or seven if he is planning to stop and shoot everything the scenery has to offer. He could find a good starting (returning) point somewhere between Mont-Joli and Matane on the St Lawrence estuary, or between Carleton and New Richmond on the Baie des Chaleurs. Riotel and the Quality Inn in Matane offers good lodging, as does the Hotel Le Francis in New Richmond.

Looking at the St-Lawrence estuary.

Should you decide to remain on trail #5 and explore the shores, you’ll miss half of the Gaspesian Peninsula’s personality: the forests and the mountains. This is why it’s a must to consider doing loops that include riding inland (north-south or vice-versa) between Saint-Paulin and New Richmond on trail #595, or Mont-Louis and Chandler on trail #597. The big question about the value of the trip to Gaspesia finds its answer here. I risk a statement: these are the two nicest trails in North America. Why?  For the most part, these trails are groomed over closed roads. Their width is obviously not a problem when riders have ten feet of trail in each direction. And there is another interesting twist on a safety standpoint: the signage used for the cars remains in place and most of it is as evident as it is during the summer season. Thirdly, there is no lack of snow, including some fantastic areas of powder to track. As one local rider told me “In the area, short track snowmobiles aren’t the ones the dealers sell first.” Finally, the scenery is quite impressive and you may often frame a shot with deer, a couple of moose and, with some luck or a long lens, mountain caribou. Far from the Rockies but still impressive: one of the Chic-Chocs.

Whatever direction you take, be sure to reach Percé and there, high on the cliff at Mont Sainte-Anne, take a breath and have a look at its famous pierced rock emerging from the ocean. Book a room and have a meal at La Table à Rolland. Then there is Gaspé, the largest town and the administrative center of the region where Motel Adams is a FCMQ secured hotel. Just north of Gaspé, there is Rivière-au-Renard, renown as the capital of the fishing industry. The Auberge Caribou is a popular stop. If you like eating what the best of what the ocean has to offer, it’s a good place to be. Further to the northwest, in the tiny village of Petite Vallée, La Maison Lebreux has you sleeping right on the sea shore. You are then 100 km (60 miles) away from one of the greatest areas for scenery, the village of Mont-Louis on the St-Lawrence estuary. There, if you’re facing the ocean, the Chic Chocs are pushing in your back and especially its first peak near the shore, Mont-Saint-Pierre, a world-renowned destination for deltaplane riders. The first portion of trail #597 starting at Mont-Louis is quite something. This is where you will climb and climb on your way to Murdochville.

We can’t forget the Southern part of the peninsula. As we said, New Richmond offers the popular Hotel le Francis, his restaurant and his pub and more. It’s also where you can join trail #595 to the north. Trail #595 leads you to the Relais de la Cache, in the mountains where you can stop for a meal or stay overnight. The Motel Chandler in Chandler, near the junction of trail #597 is a good location to take a rest.

What else makes the trip to Gaspesia worthwhile? The Gaspesians! Friendly and available, from French, Irish and Jersey Island lineage, proud and willing to share their trails and bowls with you. And let’s add the colorful fisherman’s houses, the immensity of the ocean, the Chic Chocs against the blue sky, and more.  Try it. 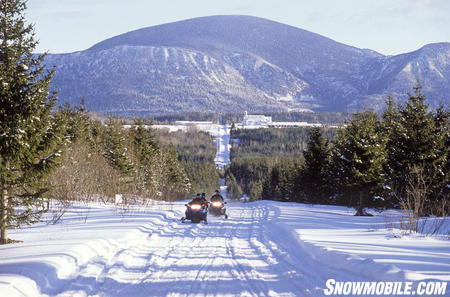 At the foothills of the Chic-Chocs.