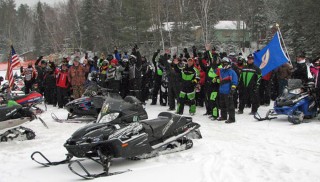 The winter of 2014/2015 began just before dawn on June 21. Each day after that gets shorter until the winter solstice reverses the trend and we head back to longer days. But, for now, as the days count down to the real on-snow snowmobile season, we can embrace the cooler evenings and look to jumpstart our snowmobiling by taking in some special snowmobile-specific activities.

The 47th Hay Days kickoff, held in North Branch, Minn, is just one event that signals the beginning of a new sledding season.

Check out this selection of winter warm-ups. These are not the only shows in the snowbelt, but they can help you get a fix on your sledding addiction. Varied in event type and geographic region, we hope that this grouping of snowmobile events allows you to plan some sledding activities and help you better enjoy the winter ahead. After all, at the winter solstice on December 21, 2014, the days once again begin to stretch out and winter’s days are numbered. 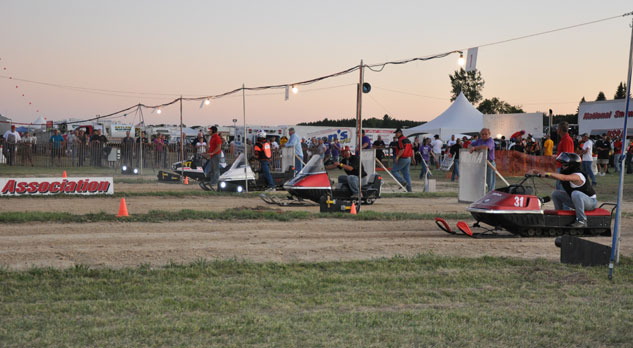 Supported and organized by the non-profit Rum River Trail Association, the Outlaw Grass Drags helps the organization’s six sustaining snowmobile clubs meet the financial needs of maintaining its 500 miles of snowmobile trails. Funds raised from the event go to make the trails safer and more enjoyable for snowmobilers riding the Rum River trails.

The three-day Outlaw Grass Drags event is held off US Hwy 169 in Princeton, Minn. at 3708 Baptist Church Road. Gates open at noon on Friday and 7AM on both Saturday and Sunday. Adult admission for Friday and Sunday is US$10. Saturday’s fee is US$15. For more specific information visit the official event website at http://www.outlawgrassdrags.com/. 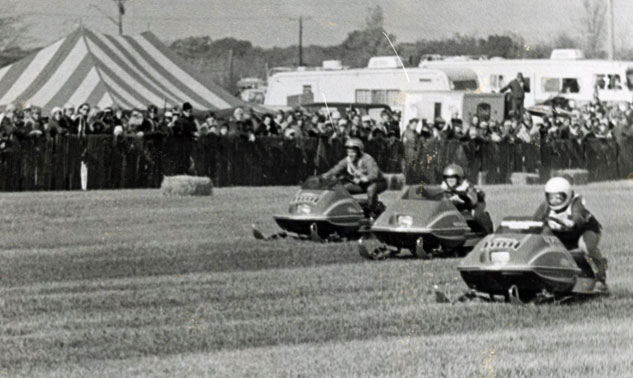 Much has changed since the mid-1970s, when Minnesota’s Hay Days grass drag event was staged in a large Minnesota field on the northwestern outskirts of Minneapolis. The track was long, wide and Scorpion sleds with Para-Rails suspensions were the stock sleds to beat.

Pushing a half-century of snowmobiling history, the 47th annual SnoBarons Hay Days is the grand daddy of snowmobile “must visit” events. It’s what snowmobilers need to put on their bucket lists because it embodies virtually all aspects of snowmobiling – past, present and future.

You’ll find a humongous swap meet that will provide “what the ?” moments and pieces of “snowmobilia” that will take you back in personal history. There will be parts and accessories to sleds old, older and never heard of. You can barter, buy and swap all kinds of items from riding gear to complete vintage sleds and one-off engines.

The present consists of snowmobile manufacturer displays of the latest 2015 models, as well as new apparel and add-ons. Aftermarket makers of apparel, accessories and new go-fast parts will be available to show you why you need their latest items and provide hints of future snowmobile “must have” gear. Various snowmobile dealers and trailer makers tend to offer pre-season specials too good to pass up. At least that’s what they claim.

Over the years Hay Days has evolved into a spectacle with grass drag races, new products, food tents and an ever-changing list of entertainment. This year Hay Days offers what event organizers call its Motorsports Expo. 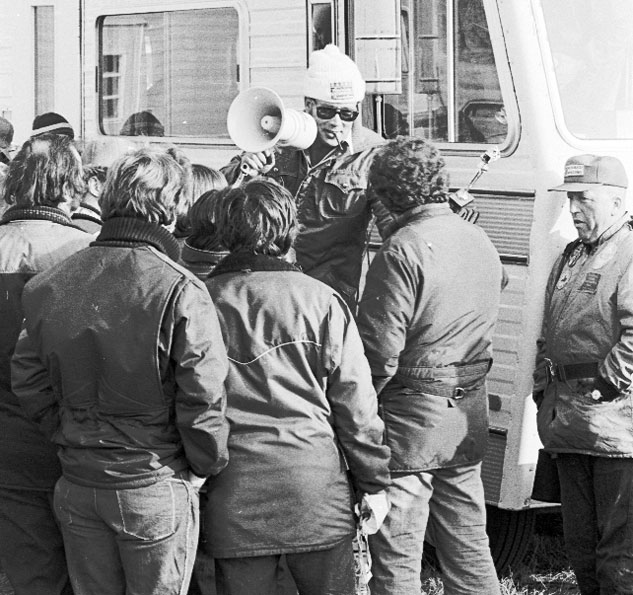 In the 1970s Hay Days grass drag spectators and racers alike were entertained by the calls of track announcer Lyle Hazeltine, a Minnesota icon of the period.

The second motorsports expo puts you in the action at a special Demo Track, where you can test drive Arctic Cat, Polaris, Yamaha and Can-Am four wheelers and Side-by-Sides. Test rides are free to those 21 years of age and older with proof of age and valid driver’s license.

As noted, Hay Days is the oldest event of its kind, tracing its history back to 1966, when there were few snowmobile clubs. The current sponsoring club, the SnoBarons, celebrates its 46th anniversary.

The Hay Days grass drags has been the sustaining focus of the SnoBarons and is what club officials point to for the club’s long-term success. The Hay Days event provides a common purpose and explains why the event has managed to grow year by year, until it is now recognized as the largest event of its kind in North America.

Hay Days started out in November of 1967, taking in a single afternoon and known simply as the “Hay Day” race. As the result of land development during the 1970s, the event has been held at different locations over the years. By 2010 the event needed to move once again. But this time the move was to its current proprietary site in Chisago County.

From an initial attendance of a few hundred racers, spectators and curiosity seekers, Hay Days has grown into a two-day event that draws thousands of snowmobilers, who consider the event as the Official Start of Winter.

The financial success of Hay Days enabled the club to create the SnoBarons Grant Program, which provides financial assistance to other snowmobile organizations and clubs to construct bridges and warming houses on their trails. Other Hay Days generated funds go to support scholarships and charities.

Admission for the two-day event is US$20 for Saturday, US$10 on Sunday. You can purchase a two-day pass for US$25. For more information, visit the Hay Days website at http://www.snobarons.com/. 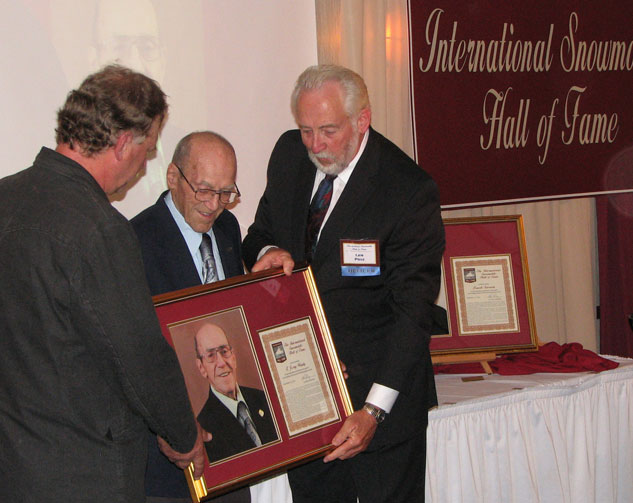 This September, the International Snowmobile Hall of Fame will host its 25th anniversary in Eagle River, Wisconsin.

Twenty-five years ago, Elmer Cone of Bovey, Minn., developed a concept for an International Snowmobile Hall of Fame to honor and recognize those snowmobilers who had created the sport, built its infrastructure and helped it to grow into an international winter recreation.

His idea of creating a snowmobiling hall of fame to recognize those pioneering entrepreneurs, adventurers, volunteers, trail and program builders celebrates its 25th anniversary with ceremonies at the International Snowmobile Hall of Fame in Eagle River, Wis., the iconic “capital city” of snowmobiling.

The weekend of September 12-14th, ISHOF will celebrate its 25th anniversary by honoring past hall of fame members and inducting three new members.

If you would like to be part of the 25th anniversary celebration or simply visit the International Snowmobile Hall of Fame (ISHOF) and museum, check out the organization’s website: http://www.ishof.com/. 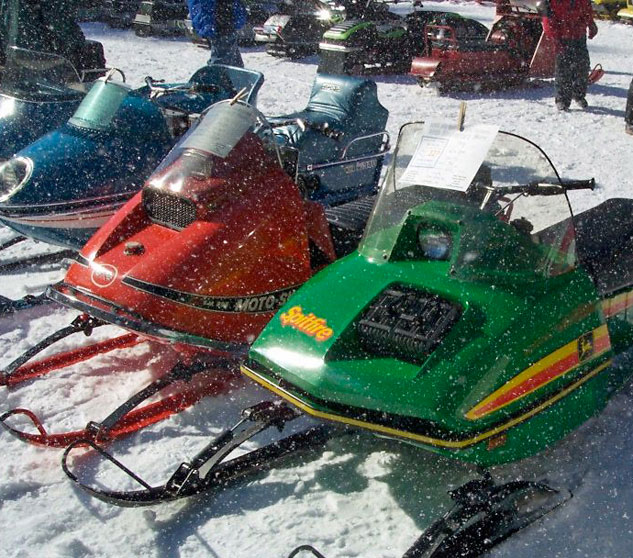 The NH Snowmobile Museum traces snowmobiling’s beginnings to the needs of the local logging industry, trappers, and rural people for dependable over-the-snow transportation. You’ll find information about the important role New Hampshire played in establishing snowmobiling as a viable and acceptable form of recreation.

The New Hampshire Snowmobile Museum recognizes the significance of the sport of snowmobiling thanks to people like New Hampshire native Paul T. Doherty, who envisioned a place where people could learn about the history of snowmobiling. He believed that there should be a location where people could go to feel the excitement of the sport; through it’s memorabilia and machines. He felt that it could help people understand the important role snowmobiling plays in the state’s economic and recreational mix.

The museum became a reality in 1985 when the non-profit New Hampshire Snowmobile Museum Association was created. NH’s Bureau of Off Highway Vehicles provided space at two Civilian Conservation Corps (CCC) buildings near Bear Brook State Park in Allenstown, NH. It became the first and only state-sponsored snowmobile museum in the United States. This one-of-a-kind museum complex boasts a collection of more than 80 snow-traveling machines along with a large collection of memorabilia.

For more information about the museum and New Hampshire snowmobile events, visit: http://www.nhsnowmobilemuseum.com/.

In addition to the usual display of new sleds form Polaris, Ski-Doo, Yamaha and Arctic Cat, there will be a Used sled Corral and an Antique Snowmobile Display.

Along with product displays, the event hosts an annual Snowmobile Trails Workshop on Saturday. Interested snowmobilers and club members are invited to join groomer operators and trail project leaders to learn more about how Maine’s snowmobile trails are funded and maintained. Members of the Maine Snowmobile Trails Committee and representatives of the State of Maine-Bureau of Parks and Lands snowmobile trail grant program will be on hand to provide information and answer questions.

A Snowmobile Safety Room will feature information about the Ride Right, Right Smart safety program. You can even test your trail knowledge, as volunteers will be on hand to assist anyone interested in participating in an interactive safety course.

Exhibitors representing snowmobile destinations in Maine and Canada can assist you with family or club trip planning.

The Maine show runs from 4PM on Friday until 3PM on Sunday afternoon. Admission for adults is US$6 and free for those 12 or younger. For more information visit http://www.mesnow.com/. 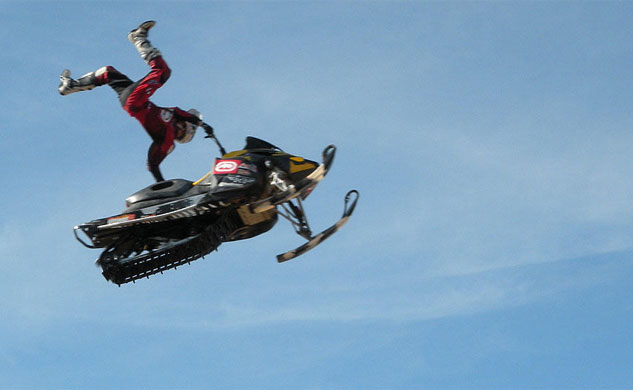 With a half million square feet of show space and snowmobile freestyle shows, the Toronto International Snowmobile ATV & Powersports show is a great way to kick off the season.

Show sponsors claim: “If you’re in to snowmobiles, ATVS and an all around Powersports enthusiast, this is the show for you! As soon as you step foot on the show floor, you’ll be blown away with the incredible roster of exhibitors and the feature events taking place around the show, not to mention the enormous Outdoors Event Area with Live racing and Freestyle Shows. You’ll find huge Manufacturer Displays showcasing all of the 2014 sled and ATV line-ups. With more corporate manufacturer displays at this snowmobile and ATV Show than any other across North America… All under one roof, over one weekend.”

The show has been designed to be family friendly and the place to make great savings. It’s billed as a “huge, quality Buying Show.” Over its 27 seasons, the show has become the event where you can expect the best selections, best deals and best display for what’s new in snowmobiling for 2015.

The “World’s Largest Snowmobile and ATV Show” runs from October 24 through October 26th at the Toronto International Centre. Admission is CD$18 for adults. For more information about events, vendors and parking, visit the event website at torontosnowmobileatvshow.com. 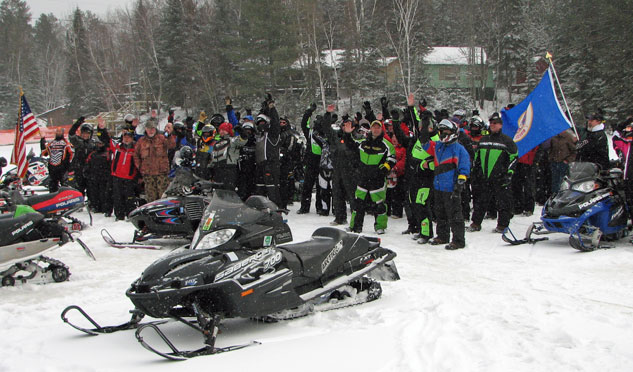 For the past seven winters, Minnesota snowmobilers have shown their appreciation for America’s veterans with an annual Veterans Appreciation Ride.

The Minnesota United Snowmobilers Association and Minnesota Snowmobile Education and Advancement Fund will hold their 7th Annual Veterans Appreciation Snowmobile Ride on Saturday, January 10, 2015 in Silver Bay, Minn. The event is held each year at different locations across Minnesota.

Minnesota’s statewide snowmobile association views the appreciation ride as “…a token of appreciation to the veterans who have given part of their lives to serve all of us.” The event sponsors provide breakfast, lunch, dinner and one night’s lodging to the attendees. There will be 20 snowmobiles available to those wanting to try snowmobiling. Others are invited to come along and bring their own snowmobile.

All veterans and active duty military personnel are welcome to attend. Pre-registration is required. For information, visit the event website: mnvetsnowmobileride.org.