It’s that time of year when snowmobilers look ahead to the upcoming riding season and turn their thoughts to long rides, cutting the perfect corner, flying off the biggest whoop and then reliving the tales with friends. Of course, the retelling of events frequently gets a bit embellished as your best miles per gallon recorded gets rounded up. That big whoop that got you big air grew by at least a yard. That tight corner becomes narrow and not the sweeper that you actually slid through. And those daily miles ridden are just a bit longer by the end of the day. It’s all part of our snowmobiling fantasy.

Actually the International Snowmobile Manufacturers Association defines this as simply being a part of the snowmobiling lifestyle. As defined by a Montana State University survey, snowmobilers participate in the sport for a few quite basics reasons: • To view the scenery • To be with friends • To get away from the usual demands of life • To do something with their family • To be close with nature. 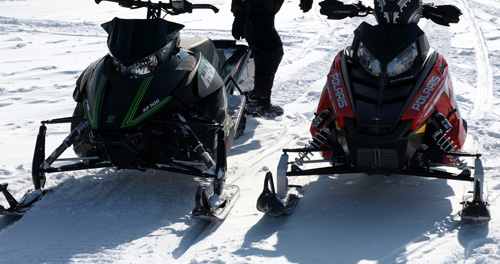 Both Arctic Cat and Polaris have become aggressive in marketing new designs and gaining marketshare with product innovations like their newest suspensions.

We have to agree with the industry association on this. Snowmobiling satisfies a need to get away physically and mentally. As we are seeing, this season seems to be appealing to a very pent-up demand for more of us cold-weather enthusiasts to break out. 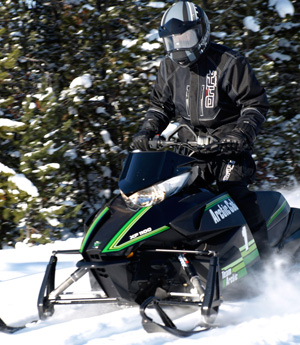 Good grief, why not? Have you watched television lately? The news is virtually all bad news. It’s November, the U.S. elections are a year away, but it’s depressing to listen to all those political scalawags whine knowing that they’ll only get worse in the next 12 months. And, lord help us, what’s a Kardashian? Apparently they can whine louder than a politician. Who knew that there was an occupation called “reality TV” star?

The good news comes nightly during the weather forecasts as places get colder and there are early freak snowstorms that dump a foot or more on coastal New England. That must mean that the Great Lakes soon will get its annual first “lake effect” storm that will catch everyone, except snowmobilers, unaware. We’ll be ready.

Seems that snowmobilers have been getting ready since last season. Polaris and Arctic Cat recently reported incredibly good quarters, driven in large respect by demand for sleds and sled gear. Both of those Minnesota-based companies came off an impressive snow-fed season with the promise of all new product. Polaris ramped up its 2012 line with a very nice Switchback series, added a true touring Adventure sled, and expanded its extremely popular powder line. We hear that Arctic Cat could have sold more 2012 Procross and Proclimb models than they built. That’s okay, it means people will be more eager to get in line for a shot to buy a 2013 model next March. 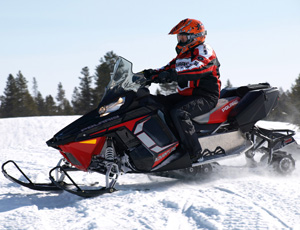 Borrowing concepts from other product lines and adding pieces to existing units helps Polaris add models like the Switchback Adventure 600.

Seems that the old snowmobiling marketing magic has returned. Snow! When we have snow, sleds sell. The more snow and longer it stays and returns, the more sleds get sold. Of course, it would appear that Polaris and Arctic Cat are in the best shape to take advantage of a good 2012 and beyond as they have both been feeding the snowmobile buying public with the newest choices. What can we expect going forward — and, assuming more continued positive “el-whatever” snow cycles?

Arctic Cat has a winner in its all-new 2012 product. We had a clue this past March when we saw one of Arctic’s top mechanics trying to stay busy by polishing sleds that the magazine test riders would return. In past generations of Arctic Cat products, the mechanics would be “wrenching” on new sleds, fixing tings that had broken. This year things weren’t breaking and the Cat mechanics had to find ways to stay busy. That suggests that these new 2012 “pro-series” models must be pretty darn good. They certainly appealed to potential Cat riders. 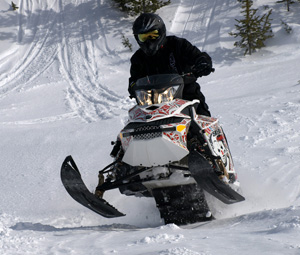 For 2012 we anticipate that the new chassis and suspension systems will be expanded to replace touring models. We also expect that at least one 2013 preview model will showcase an all-new Arctic Cat engineered and built engine. Cat is going away from Suzuki power in favor of its own designs, that’s a published fact. We’re speculating that a new engine will hit the snow in a 2013 chassis, perhaps as early as an Eagle River Derby unveiling in January. Odds are it will be a direct injected two-stroke along the lines of Rotax E-TEC series. A new 600cc displacement would make some sense, as we just don’t see the non-turbo one-liter 4-stroke holding off Ski-Doo MXZ 600 and Polaris 600 two-stroke sales forever.

We would expect that Arctic Cat is likely to complement its 800cc two-stroke with a smaller sibling, just as Ski-Doo has done. While Ski-Doo evolved some of its sister company’s Evinrude direct injection technology, we recall Arctic Cat working with Mercury Marine on some direct injection technologies as well. Mercury offers direct fuel injection in some very successful two-strokes. Or, since snowmobile companies have been known to buy technology from each other, like electronic reverse, why not license a two-stroke injection system?

We do expect to see new motors coming from the Cat in two- and four-stroke designs. 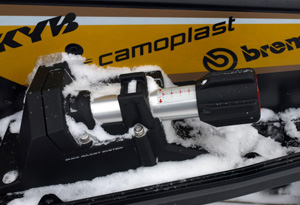 Ski-Doo attempts to fight Polaris’ Pro-Ride with its own rMotion rear suspension concept.

We fully anticipate an expansion of the new Ski-Doo rMotion suspension into more models or, at least as a full production offering. We figure it can make it on to a new sport-touring hybrid that could offer the best comfort and ergonomics of the GSX with the performance attributes of the MXZ.

We aren’t seeing a big play in engines as the E-TEC series has been successfully integrated throughout the model mix. We could see another displacement version of the 600 ACE four-stroke, perhaps a 450cc or 750cc to satisfy, first, low end buyers desiring a 340cc level of performance and something a bit more potent for reliable two-up riding that would be lighter than a 1200 triple. This is really pushing the envelope of probability, though. We don’t see Ski-Doo bean counters allowing the marketing push we’ve seen from what we once thought was ultra-conservative Polaris.

Polaris has truly surprised us in recent years as it continues to push sales with new or seemingly new product that has a good appeal to both its ATV and sled customers. At the rate Polaris has been innovating, we wouldn’t be surprised to see a hybrid gas-electric snowmobile or side-by-side UTV in the future. This company has scored expertise in the electric vehicle market in the past few years. First the company developed an electric side-by-side and a “gated community” EV. Then it relieved Fiat of Chrysler’s Global Electric Motors in North Dakota. More recently Polaris bought a share in BRAMMO, a maker of electric motorcycles. Not just any two-wheeled bike, but a performance electric bike. We are no longer naive enough to think Polaris does not have a plan in the EV scheme. 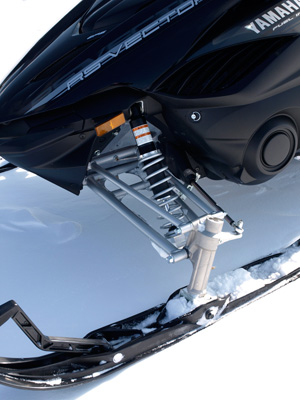 Known for wonderful quality, Yamaha relies on innovations like electric power steering to push sales of proven products like the Vector.

And, then there’s Yamaha. We keep expecting new and exciting. But the Yamaha reality may be too simple. Since product research and development is fed from a percentage of sales in each division, Yamaha’s niche snowmobile group may not have the financial firepower to drive a breakthrough technology in sleds like it can in motorcycles and outboards. So, here we think Yamaha will work on updating existing four-stroke powerplants and, perhaps, playing with a new, must be lighter powder sled design to grab a share of that too big to leave alone market share. We think the turbo powder sled sounds great for high marking riders, but is it nimble enough for winding through the tree line or making an easy cut in bottomless powder?

Every one of the four main snowmobile companies has some dated product in its inventory. The point is that Arctic Cat and Polaris seem to be heading into 2013 with the promise of newer rather than older. Of course, this can all change and we do expect Ski-Doo to grudgingly give up any hard-earned market share points. We do see some promise for Model Year 2013 to be quite exciting. Only time will tell if we live in too much of a fantasy snow world or not.

Related Reading Arctic Cat Takes a Short-Term Risk Polaris Gets On The Gas In A Down Economy Have We Seen the Future of Snowmobiles? Snow is THE Answer What’s Up in the Sport Today? Snowmobiling’s Decade of Change