Following the snow to stretch out the season

So, you’ve spent eight days traveling, riding and photographing new 2015 sleds, what do you do next? Go riding, chase snow, of course.

The week after getting back from in-the-saddle impressions of the key 2015 model year snowmobiles in West Yellowstone, we headed north to our top secret Area 330 ride site just off the south shore of Lake Mille Lacs and situated near some of Minnesota’s finest snowmobile trails. There were seven of us, some former test riders, a snowmobile publication executive, a regional snowmobile sales representative, two local area businessmen and our veteran trail guide. He knew the trails. He should, as he has spent thousands of hours grooming many of them. 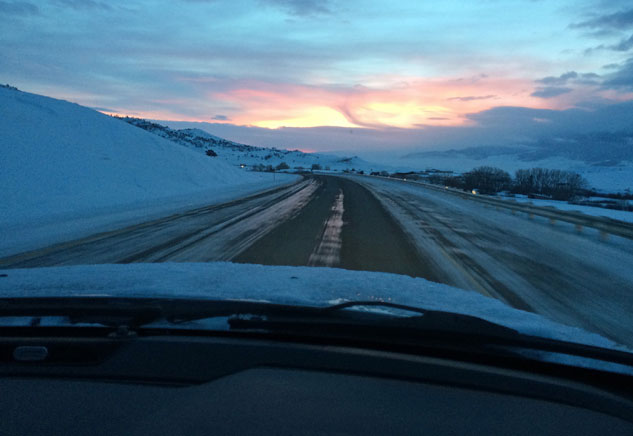 Serious snowchasers extend their riding season by hitting internet sites like Hardcore Sledder for word about the best riding areas and then packing up and driving to the snow – wherever it may be!

After a brutal February of seriously below zero temperatures, our ride day started out in the low 20’s. The trails were stiff. The previous days’ melt down had been followed by near zero nights, freezing the snow and any tracks in it. It posed a challenge as even the most modern ski sets tended to hook into the pre-existing runner ruts. Worst, though, was a deep furrow left by an angle iron guide from a trail groomer. In normal conditions the rut would be folded into the main grooming, but not on this day. Once a ski hooked into the rut, it took serious effort to pull the front end out of it. Once you did, you quickly learned to stay way away from it.

But, trail conditions are trail conditions. Admittedly the morning ride challenged some of us, as the corners were not simply ski grabbers but slick as well. Full brake lock wanted to set tracks sideways. Obviously throttling back worked. Trail conditions often dictate speed and this morning was a true example of conditions controlling the ride’s pace. 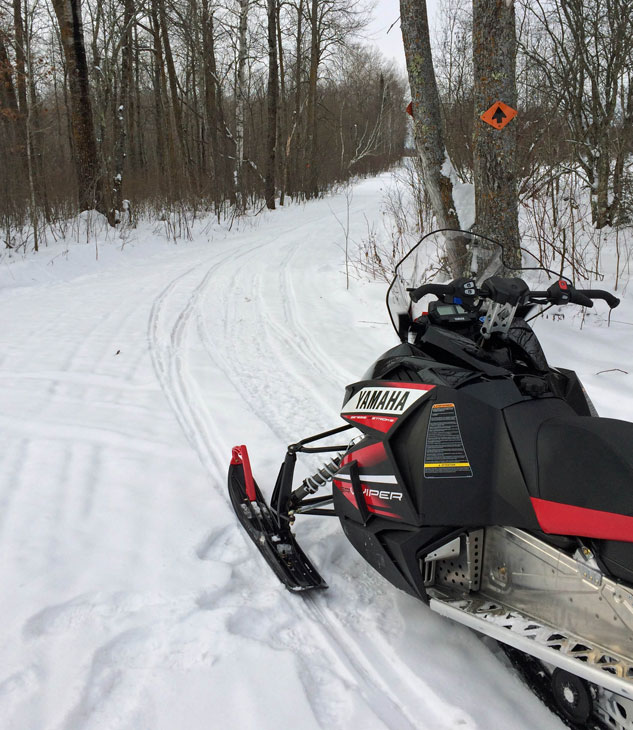 We’d looked forward to this March ride. Generally mid-week running offers light traffic and fresh groomed trails. It was pretty much that. After a lunch stop and with warmer afternoon temperatures the trails softened up, providing more certain grip. Plus, the group was a good one. The riders were all experienced, knew each other and shared the bonds of the snowmobiling brotherhood. There was kidding back and forth. Sled choices got picked apart – a little of that Ford versus Chevy thing.

Maybe that’s what makes up the sport – the camaraderie of riders. As a snowmobile writer with access to the newest of the new, sometimes we tend to think only in terms of what we ride, not why we ride or with whom. It’s our job to shake down a new sled and look for its faults. But on a ride like this one, we become true snowmobilers, just out for the day, enjoying the ride and the people. 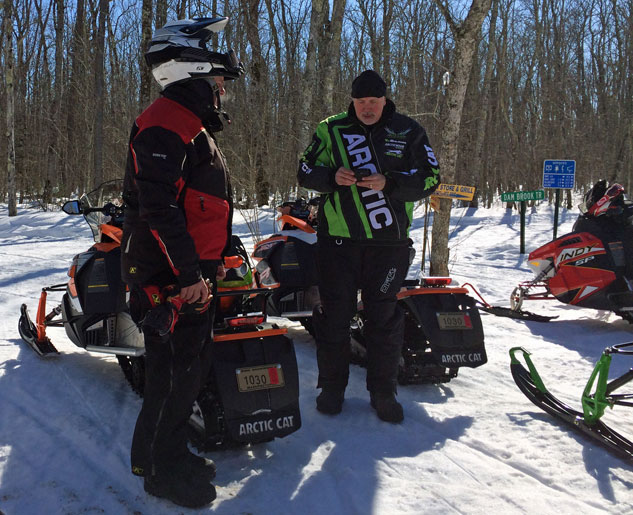 Snow makes the sport, but the camaraderie of snowmobilers with their “brand-teasing” and common bond of enjoying sleds and winter makes for good times.

It struck me on our group ride what brings us snowmobilers together. It’s a camaraderie that’s offered by the sport. After this early March ride, I rode again a few days later under somewhat similar conditions, but this was a work assignment testing the new Hayes Trail-Trac braking system. It would have been good to have that set up on the group ride. But this was a singular purpose event, not much camaraderie intended when working.

But, then about a week later, our not so secret riding Area 330 kept getting snow and I decided to head north alone. It was getting late in a season where all trail grooming over private lands must stop on April 1st. Snow pack south of this riding region had shrunk and the internet word was out that our area was not simply still ride-able, but well-groomed as well.

The Saturday morning came. I hauled my own personal sled to my favorite area’s trailhead. Good grief! The parking lot was overflowing with pickups, SUVs, multi-place covered trailers and two- and four-place open trailers. I found a spot for my rusty-fendered solo sled hauler and unloaded. It was the first serious ride of my 2006 fan-cooled Ski-Doo in almost three seasons. It rarely saw any mileage as I used freebie “demo” sleds for any riding I needed. But, I’ve always enjoyed this throwback Ski-Doo with its original REV ride-forward seating and lightweight handling. It’s simple in operation with a basic 550cc fan-cooled two-stroke that smokes oil when it first fires up, makes power through a simple Powerbloc-style Bombardier Lite clutch and invites memories with its air-cooled need to thrash. It takes me back in time and leaves me coated with the smells of an innocent freedom. I like this sled and regretted not playing with it before this. 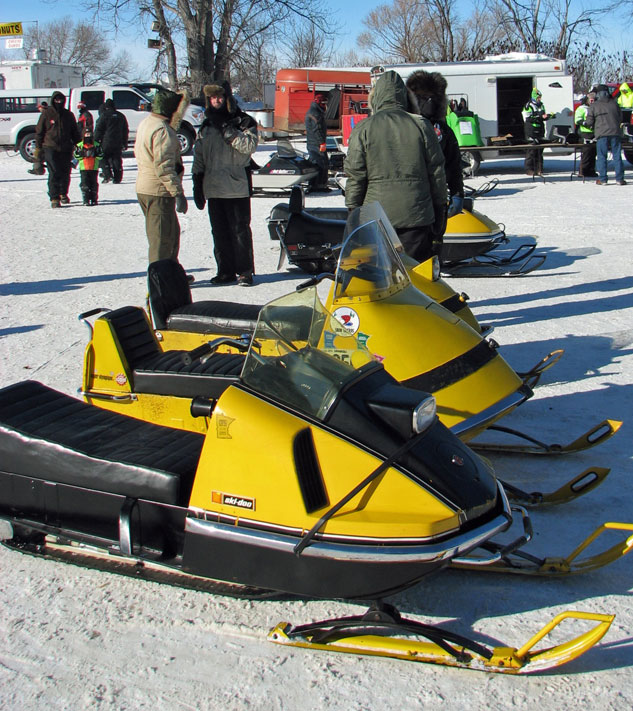 Not all snow chasing involves the latest and greatest in snowmobile technology, much of it involves memories revived by vintage events.

But mine was not the oldest sled to ride out of that trailhead on that Saturday morning. The four-place covered trailers dislodged newer Polaris Switchbacks and Ski-Doo MXZs. Groups of 20- and 30-something year-old riders gathered up and headed off. Then a dual place trailer pulled alongside me. The sleds were older Arctic Cats. The beige Carhartt-clad pickup driver stepped out and asked about trail conditions. He wanted to know because he was taking a young 20-something guy and girl out on their very first snowmobile ride. He made sure they were warmly outfitted. Now he wanted reassurance that the trails would be easy and safe. He was reassured and we even told him of the local club’s off-trail warming hut. Then they got ready to take off.

Out on the trail that day, we had followed behind a 50-something couple aboard older Polaris Indys. We never did run across the guy-groups with the newer sleds, but we did see the occasional husband-wife couple trying to prolong the snow season.

Then, just after the trails officially closed, we made one last foray to the not-so-secret Area 330 riding loop. Ironically, it was snowing and the forecast called for upwards of a foot of new wet snow. We made some miles again on our favorite 2006 snowmobile, loaded up and beat the storm home. It did leave behind between 6 and 12-inches of fresh white. It’s gone now. You couldn’t tell that we had plowed it back into the protruding snow banks that had accumulated over the winter. Guess that’s what warm 60-degree sunny days do. 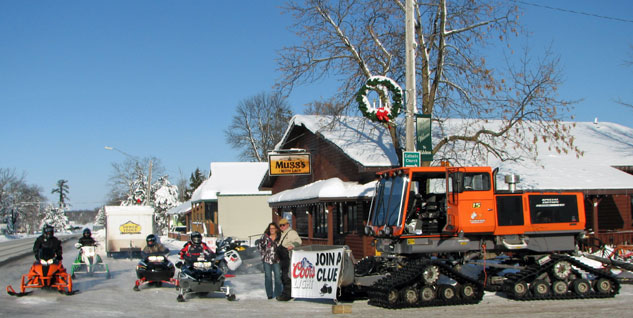 Some areas located on key trails in snow country understand, promote and welcome snowmobiling as part of their community activity.

With the winter of 2013-2014 finally coming to a melt, we know certain things remain constant. Snow is the key ingredient in snowmobiling. This past winter proves beyond any doubt just how crucial snow is to a successful recreational as well as sales winter season. It doesn’t take an MBA-educated marketing person to understand that. Any snowmobiler gets it. And as we witnessed and experienced firsthand, early snow gets us out on the trails early and late snows keep us out there. Why else were all those pickups hauling sled loads of trailers overflowing the trailhead at one of the best trail loops in central Minnesota? These weren’t locals, either. These were snowmobilers from Iowa and southern Minnesota looking for and enjoying good riding close in. In sparser snow seasons, these same folks would have headed another 200 miles farther north to ride. But ride they would! They get the fact that s-n-o-w are the most important four letters in the word snowmobiling and they’ll hunt it down until it’s gone!