A year ago our last ride of the snow season came at the end of the annual photo/test ride session in West Yellowstone. The simple reason for that: lack of rideable snow in the Midwest. Fast-forward to March 2013 and things were markedly different.

This season, while not a great snow year, at least provided us with ample snows that came as consistent storms, sometimes mean enough to warrant naming of them by Weather Channel minions, but mostly somewhat inconsequential storms dropping two to six inches at a time, usually at “rush” hour in the metro regions. Those inconsequential snows added up, giving us ample riding days. If not for the simple fact that agreements with gracious landowners require that many trails have to close by April 1, we could still be riding in lots of areas. Indeed, trails in the northernmost parts of the central United States still host some diehard riders. But, for us, we let the last ride come voluntarily. That’s quite a change from the past few seasons when late February proved more fitting for golf than snowmobiling. This year, petulant golfers decry the change in fortunes, as they have to wait while we snowmobilers enjoy our last rides of the year. 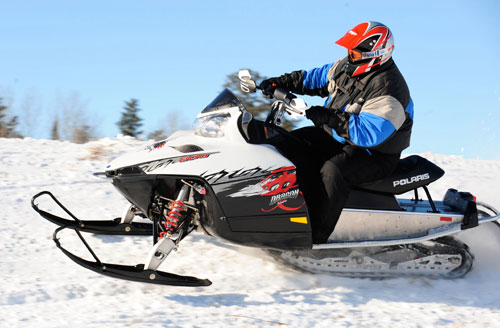 When the end of the season comes, you try to make it special with a bit of hard riding.

We believe that such late snow trail closures, which are probably “normal” by traditional winters, will be good for snowmobile businesses. Although Polaris estimates in its most recent annual report that total sled sales through March 31, 2013 will decline by about three percent from last year. While that may be true, we can’t help but believe that the end of the season impression of plentiful snow and late riding will imprint a sense of a “good” snow year on the brains of many snowmobile enthusiasts. We hear that turnouts at many snowmobile expositions and “demo” ride locations exceeded expectations. There certainly were many of them this year. 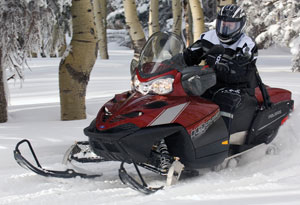 Your end of the season ride can be getting away for one more long distance cruise.

Our last ride brought us back decades before, when getting to that last ride-able snow meant trailering to northern New Hampshire with an older but equally enthusiastic snowmobiling buddy. We left early in the day to join up at a “closed for the season” stretch of highway that ran through the White Mountains. Like this year, the snow lay exposed to the sun and water escaped out the bottom, leaving a “corn” snow structure that our tracks compressed. No light powder here, it was a serious end of the season snow. 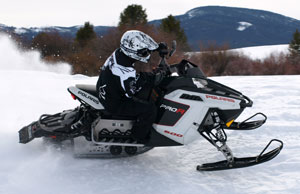 Action riders like to wrap up the season with a big air blast.

Back on that New Hampshire snow highway, we rode vintage sleds; only they weren’t vintage back then. They were current models that put our fannies mere inches off the snow. The skis, long and narrow, plowed corners as the long bogie-suspended tracks overpowered the turning ability. But the sleds were light, about 250-pounds, and underpowered, which proved to be a good thing.

Winter storms in this section of New Hampshire dumped ample snow, which we tore up off the highway and along the ample berms. We found a picnic area that served as a scenic overlook in the summer. We stopped for a break and parked atop a large picnic table, unaware that it was a picnic table. The snow dump had covered it well. 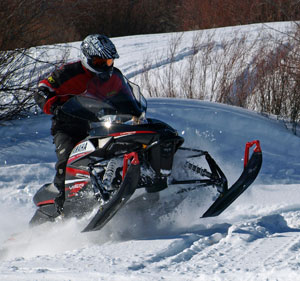 The purchase of a new 2014 action sled like the Yamaha Viper gives you something to impatiently get you through the summer months.

Then we decided that we’d venture off the main highway to explore the sharp hillsides. The invitation exceeded common sense, as we’d run up the hillside, turn around and full throttle back down, negotiate the vee indentation at the bottom and fly up off the berm back to the roadway. It seemed like a good idea and it was fun. Until… the snow at the bottom of the incline gave way and we went head first over the handlebars and face first into the snow, right between the skis.

Since we had split up, my buddy lost sight of me. He climbed the hillside looking for me, finally finding me a bit dazed trying to get out of the snow pack. There was a perfect head first indent in the snow. And, then we looked at the sled. It was perfectly fine, but definitely wedged into the side of the stream of melting snow that we now recognized as undercutting the snow we had been blasting through. It had all seemed so perfect, but we should have recognized the danger.

Years later, when riding near Togwotee Pass outside Jackson Hole, Wyo. in the spring, we got to learn from this experience. The Togwotee area invites rapid riding across wide rangelands, but those seemingly wide 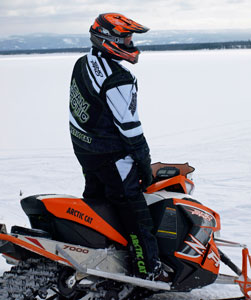 The last ride can mean one last sled-to-shore run before it all turns to water.

open play areas hide small streams that undercut the snows. Once fooled, we learned to recognize the danger, although a member of our riding party augured into a stream bank when the flat snow cover fell away. He was okay and he learned a lesson about spring riding.

Fortunately, on the recent last day of riding we only braved some bare, muddy sections on the most sun-exposed areas of trail. Even as our last day’s ride came to an end, we were tempted to return the next day as we figured that the season’s end could last another day or two. But, we wrapped it up, satisfied that we had gotten all that we needed from the day – enough snow, enough miles, enough laughs. It was a good day. And on such “last” days, we recall that last ride in New Hampshire from so many miles before. We had fun. We had laughs, especially about an intense face-plant. On both last rides we shared a day that takes us through summer and looking forward to another snowmobile season ahead. That’s what last rides do!