A bell rings, a customer finalizes his snowmobile purchase and employees on the sales floor, all wearing matching company team jerseys, break into a song and dance about “driving it like you stole it.” It’s a culture at Rexburg Motorsports. Off-road toys are a religion to these employees.

As a late grade school and early Jr. high-aged young man, Jared Burt would pester the sales staff at a local Rexburg, Idaho snowmobile dealership about the latest snowmobiles while combing through the sales brochures on each new model. Wanting to outsmart his friends on what was hot on the snow, Jared desired to arm himself with pamphlets, but the dealership’s owner told the lad, “If you’re not buying, the brochures remain here.” Being persistent, he offered the owner a quarter for each brochure and a long-standing yearly tradition began. The dealership was Thompson Sporting Goods, an Arctic Cat and Yamaha snowmobile dealership that Burt bought 25 years later. 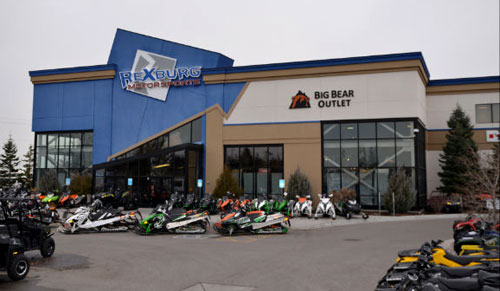 The Rexburg Motorsports facility is a battleship — large and filled with parts and toys to satisfy any enthusiast’s snow, dirt and pavement passion.

Burt, general manager and an owner of Rexburg Motorsports, is a professed off-road motorized recreationist junkie. He is also a numbers man. His formal education is in business accounting and in the practicalities of retail equipment and off-road sales, from tractors (his past history), to dirt bikes, ATVs and snowmobiles.

Burt is the operating partner for a superstore where he and his staff of more than a couple dozen sell and service Arctic Cat, Ski-Doo, Yamaha, and Polaris snowmobiles. Along with that come the ATVs and side-by-sides from each of those brands. Not to end there, the store also sells Kawasaki, Honda, Yamaha and Suzuki on- and off-road motorcycles. His is a large commitment. 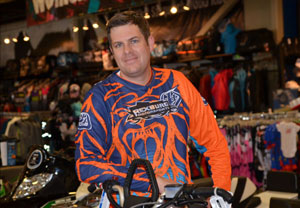 Jared Burt thrives on giving all he can to his work staff, his customers and to the OEMs. Yet, regardless of megadealer status, Jared stays rooted to small farm town ethics. All staff members wear personal and numbered Rexburg Motorsports team jerseys.

When Ken sold the tractor dealership, Polaris and Suzuki became the new breadwinners for the Burt family. As he gained wisdom in sales, service and accounting, Jared bought out one of his father’s partners, thus becoming a Rexburg Motorsports owner. After several years, Jared bought out the start-up owners, completing his full immersion.

With new cash on hand, Jared’s father built a new modern-era tractor and farm implement dealership north of Rexburg. Jared says, “A couple years after my father sold the Polaris dealership to me, he called and said he was going to begin selling Ski-Doo snowmobiles and ATVs.” Jared added, “That was going to make some interesting conversations at the Sunday dinner table; my father being my competition.” Jared said he was less than enthusiastic about competing against his father.

Not long after this though, Jared’s father sold the tractor dealership and Jared purchased the Ski-Doo franchise.

It wasn’t long before the old doors on Main Street just were not big enough. Jared with his partners, Allan and Brad Ball, bought out three other dealerships putting five dealerships together into one location. About the same time, the Arctic Cat dealership in a city north of Rexburg sold its territory rights to Jared. With factory approval from all four manufacturers, Rexburg Motor Sports became a modern snowmobile mega-dealership. 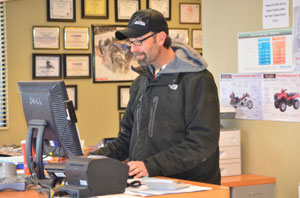 Rexburg Motorsports’ Service Department has experts. Service writers, like the dealership’s mechanics, are product specialists whom and experts on specific brands and models.

Although Rexburg is a farming and university community, it’s hardly what you’d consider a big city metropolis. Yet, it is no stranger to “big.” It has big farms, big potatoes, and a big little university, Brigham Young University-Idaho (BYU-I). The community also is in an area where there is big snow. One of snowmobiling’s favorite areas, Island Park, is 30 miles to the north and the Teton range just 45 miles to the east and both interconnect. South of Rexburg is Rigby, home of Klim, and Idaho Falls, headquarters for Motor Fist, Boondockers, and Starting Line Products; all well-established and respected names to snowmobilers.

Jared and Rexburg Motorsports have survived and endured some battles. As one who lives locally, I watched firsthand as the large two-story Rexburg Motorsports complex grew at the same time as agricultural prices and personal incomes were shrinking (along with snowmobile sales). I gave the super dealership about a three-year mortality. I believed it would grow itself to death; I believed it could not juggle the four snowmobile manufacturers and keep them happy; I believed with its size, it could not please the customer, tossing away its original small-town service to feed the big financial whale; I believed its cash flow would slow and Rexburg Motorsports’ doors and windows would shutter. In some form or another, all but one of these – the last – occurred.

Rexburg Motorsports’ sales and service staff has matured, beholding to education, passion, and savvy about the off-road motorized recreationist – its customer.

Jared told Snowmobile.com Rexburg Motorsports will not be manipulated into a trap where an OEM wants it to use another weaker OEM’s snowmobiles as a way to boost sales for its own models. “To our customer who wants a Yamaha MTX, that snowmobile is the most important brand and model to them; we don’t downplay any brand or model, and the customer doesn’t care about the bashing.”

Jared mentioned an OEM that asked him, “What’s your asking price to drop that other line (a competing line)? I will write out the check for you to drop them.” Jared said, “No amount of money can convince me to drop any of my lines. An OEM may be on top today and tomorrow they may be at the bottom – it all balances out over time.” 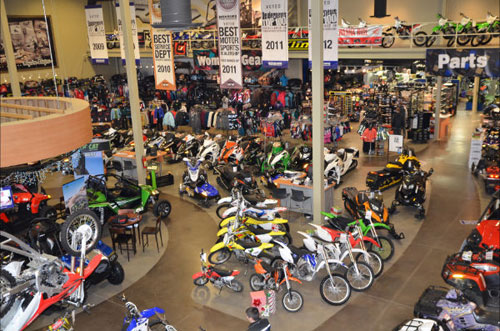 The massive showroom is organized into brand, model and type. Success comes from the fact that snowmobile customers are also ATV riders and motorcycle riders. Note the “Best” of banners hanging from the ceiling.

Jared has positioned his superdealership to be four dealerships within one. Meaning, during the snowmobile season, for example, corner one is dedicated to Ski-Doo and corner two to Arctic Cat and so on. With that, his sales and service staff are subject-matter experts (“Ambassadors,” as Jared calls them) on two brands. Though the sales staff can sell all four OEM brands, “X” amount are Yamaha specialists, “X” amount are Polaris experts and so on. This is also true for the dirt- and pavement-wheel products. Likewise, the mechanics are spread out to be specific experts – trained and qualified on two brands.

This philosophy, according to Jared, keeps the staff at Rexburg Motorsports from being spread too thin. “There is much to learn, so rather than burning out my staff, I’ve made them specialists in a few product lines, which gives the customer and the manufacturer peace of mind that the sales person or the mechanic are the best in that product line.”

But, this does not mean the other staff or mechanics are not aware of the other products. “Once a week we have training where a mechanic or a sales or parts pro will teach all Rexburg Motorsports employees about new products.” Yet, these staff meetings are not for products only, a mechanic may teach about customer service or workplace communication. “Cross training on products and business is important to us.” Jared gives his people buy-in on decisions and gives his employees the treatment they give the customers. Goodness rolls downhill too. 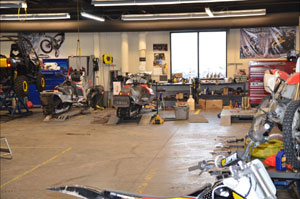 The shop is large. When new snowmobiles arrive, they are sent first to a prep shop and then to the main shop. Within the shop is an exclusive Mod Shop (hidden from view), where modified snowmobiles are built to customer specs. There also are specialty Mod Shop snowmobiles available for walk-in customers to purchase.

“This comes from much hard work, lessons learned from mistakes made, and hiring the right people,” he says. But, Jared does not feel he, rather Rexburg Motorsports, has it all figured out. He believes Rexburg Motorsports is still walking, albeit a fast walk, and is ever learning.

“With that, we have become partners with the OEMs, working as a team to build their image and customer loyalty. But, we remain passionate about motorsports and to those who also enjoy motorsports; we do not put brands and models above the customer and their passion, and I believe they (the OEMs) know that.” Jared mentioned that Rexburg Motorsports has a reputation for standing beside the customer on warranty claims when other dealers have folded to OEM pressure, or called in doubt the customer’s claims of product failure. “We always give them the benefit of the doubt,” Jared says.

Rexburg Motorsports, through its high CSI and its mod shop, has become an authorized Boondocker dealer and service center, basically an extension of Boondocker’s headquarters. Furthermore, Rexburg Motorsports has received endorsements from Chris Burandt, Dan Adams, and Bret Rasmussen as ride organizers for their individual (ride clinic) businesses.

Here’s a side note, when Jared interviews a sales applicant, he grills them on their product knowledge and off-road past. He wants to know what kind of snowmobile they’ve owned, how many, and if they’ve wadded it up. “I want passionate employees.”

Jared is still young and has drive. With that, Rexburg Motorsports, though it resides in a large facility, is very small town, giving much to the customer, while balancing and spinning four OEM basketballs on its fingers.

Those 25-cent brochures paid off by building Rexburg Motorsports one quarter at a time.