If you can't have fun on this sled, get out of the sport now!

If you can’t have fun with Arctic Cat’s 2010 Sno Pro 500, then you should get out of the sport. This is one crazy sled that plants wicked big smiles on your face. And, yes, we were impressed. We really liked it, but then you’ve guessed that already, right?

Arctic Cat’s snowmobile product guru, Joel Hallstrom claims, “There is nothing like this (sled). It fulfills a need as there is nothing in this segment.”

What segment is that — exactly? According to Arctic Cat marketers, that would be the relatively low cost, high fun quotient, race-bred, trail-effective “go have fun” sport sled segment. Indeed, this race-ready sled could be considered dual purpose. If you bought a 2010 Sno Pro 500, you could literally race it on Saturday and trail ride it on Sunday.

Arctic Cat states: “It’s exceedingly light (450-lbs) and agile, with a chassis that has dominated terrain racing for the past two seasons. It comes ready to race and to blast trails and bang ditches. It oozes the latest race-bred technology. And at just US$8,299, it combines unmatched performance at a low-level price.” 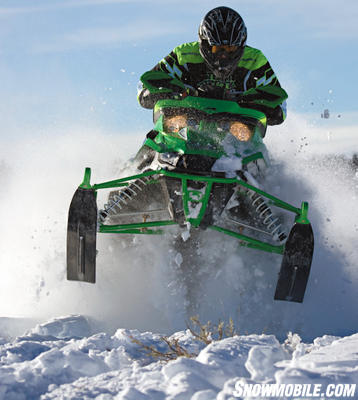 To date, each snowmobile manufacturer offers a unique new model to highlight its specific 2010 production line up. Polaris comes in with the new 600 Rush with Pro-Ride and Yamaha offers a new Nytro for the powder crowd. But Arctic Cat offers us potentially one of the great play sleds of the new century in the Sno Pro 500.

Indeed, you say. How about the 600cc Polaris RR race replica? And what about Ski-Doo’s new 2010 XRS race replica? Indeed, we say. Which one of them was priced like a Shift 550 or Yamaha Phazer? None, we say!

Arctic Cat’s Hallstrom knows a bit about race-ready trail sleds. As Team Arctic race manager, he oversaw Cat’s competition arm when he says the company actually built and sold about 2,000 race sleds — because they could be easily adapted for the trail. He points out the race-readiness of the Sno Pro 500 also includes a full warranty and the use of readily available 87 octane pump fuel. 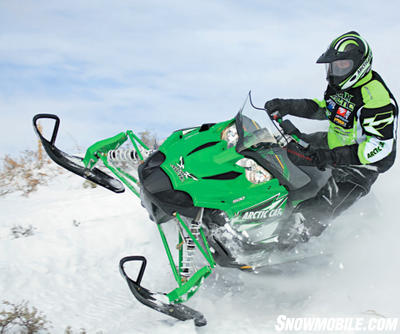 Let’s understand that this sled is not the exact version with which Tucker Hibbert scored wins — of course, that talented young man probably could win with this one, too! Arctic Cat engineers worked the Sno Pro 500 to make it everyday ride friendly. That meant adding oil injection to feed the tamer Suzuki-built 500cc, 85-hp twin. Because Arctic Cat sees the Sno Pro 500 as an everyday ride — and occasional racer — the sled reflects the needs of trail riders, while retaining the key concepts that made Cat’s snocrosser so successful. The engine used is the same one found in the 2010 F5 and in previous model year touring and trail performance models. It features batteryless electronic fuel injection for quick and sure starting. This is one of Arctic Cat’s most proven reliable motors. That is a very good consideration for beginning racers as well as sport minded trail riders.

What really sells the Sno Pro 500 to us — and a legion of sport riders — is the sled’s wicked quick reflexes. It turns unbelievably sharp angles. It cuts trail corners sharper than the best F-series, and those sleds work incredibly well. The Sno Pro 500 is what Cat calls “flickable.” We agree. 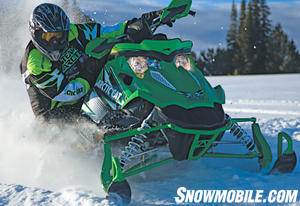 Now, keep in mind that what you are reading here is a first impression based on riding a wounded prototype at a sneak preview in northern Minnesota. But based on decades of experience with Arctic Cat and how it conducts it business, we believe that what we rode, wounded or not, will be very right by production time. The test ride sled had been dumped, side-rolled and tree-pranged by another enthusiastic journalist prior to our ride. Cat’s mechanics managed to convert pieces from another sled and get the Sno Pro 500 back into the sneak preview fleet in a few hours of pit crew like activity. That was impressive enough. As was the embarrassment and chagrin displayed by the journalist in question.

Regardless of this wounding of the prototype, the sled was fitted with converted pieces so we could get an impression of what the finished product would be like. It will be well liked by trail sport enthusiasts. You go really fast guys won’t care for it because there just isn’t the oomph you need. 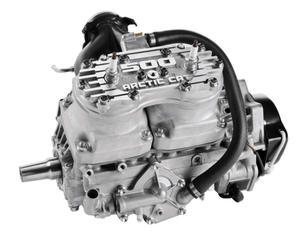 If there were one wish list item we’d like and know full well that we won’t get, it would be a step up to the older but ‘emissions dirty’ 105-hp version of Cat’s 500cc twin. Don’t even bother asking. It won’t be happening for production Sno Pro 500s. As you’ll note in other sled lines for 2010, the dirtiest dawg 2-stroke motors are gone. Sled makers are very conscientiously working on ‘fleet average’ numbers to make emissions and mileage numbers work. So, learn to love the 85-hp twin. All snideness aside, the Sno Pro 500 gives you Arctic Cat’s latest wishbone suspension with tall, extruded ski spindles and a geometry that has the front end traveling in a vertical plane to improve quick cornering. Cat refers to its racer-quick steering as Progressive Steering, which is claimed to provide less effort when initially turning in to a corner but adding progressive effort to reach full steering lock. The steering post offers customization and can be set in one of two positions to suit an individual’s riding style.

While the Sno Pro 500 is not the full-race snocrosser, it shares the look and feel of Cat’s racer. That includes the race-bred slide-action rear suspension for the single-ply 128-inch Cobra track to spin around. You get quality Fox Zero Pro shocks up front. And for you all day sport riders, the 500 comes with an 11-gallon fuel tank.

Understand that this sled will be limited in availability, so, if you want one, act fast. We can tell you that Arctic Cat’s profit margin on the Sno Pro 500 is tight, so figure that the US$8,299 price is a bargain. If you were thinking about a Ski-Doo TNT or a Phazer, think again because Arctic Cat gives you some seriously wicked fun in a very good package at a very nifty price. Think hard about this deal. 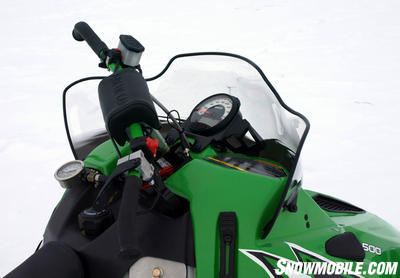