Performance and handling for flatland hotrodders

When Polaris brought us the 2010 Rush with its innovative Pro-Ride progressive rate rear suspension, the thought seemed to be that this would be the end-all big bump suspension for rough trail sleds. It caused some consternation among Polaris’ competitors, one of whom, Ski-Doo, responded with its rMotion as a counter attack. But, now just a few years into its performance trail project, Polaris brings only two Rush models forward to 2014. These are both the top of the line Pro-R models and offer a choice of 800cc or 600cc two-stroke power. The 800 and 600 base models are gone, effectively replaced by new 800 and 600 Indy models.

From a marketing point of view this all makes sense. The dollar difference between the new 800 Indy SP and an 800cc base version of the Rush would be insignificant, so dropping the base model and retaining the more fully featured 800 Rush Pro-R seems like good business. If you must have the upgraded Rush 800 Pro-R, it will cost you about US$1,200 more versus the new 800 Indy SP. You’ll find the “R’s” added value represented by inclusion of top of the line Walker Evans shocks and the more supple Pro-Ride rear suspension. The choice for you comes down to price and what you perceive as the value of the Pro-Ride suspension and other extras that come standard with the Pro-R but may be pricey options on the Indy – if you can get them!

We won’t pretend that we preferred a base Rush to the new Indy SP. We didn’t. However, the standard benefits of the Pro-R do make it a better value than even the top of the line SP version of the Indy. The major difference between the Pro-R and an Indy SP stands out immediately. The Pro-Ride rear suspension gives the Rush a look like no other production snowmobile ever made. Its externally mounted rear shock defines Pro-Ride in both the Rush and longer-track Switchback models.

Trail-wise, the Rush short track rear suspension definitely works the bumps better than the Indy’s shocks inside the skid frame design. With the use of exclusive to Polaris Walker Evans 16-position clicker shocks, the Rush Pro-R gives you extreme adjustability. If you ride well-groomed trails most of the time, you’ll be quite content with saving the thousand-plus dollar premium and purchasing an Indy 800 SP. In those conditions the ride would be comparable. But, reality dictates that trails are not always well-groomed 100 percent of the time, unless you are always the first sled out after the groomer has made its pass. How often does that happen? This is where the Rush has a distinct advantage as it can take the “jounce” out of niggling stutters and react to big “G” rollers, allowing you unprecedented on-trail comfort and ride in comparison to the Indy. 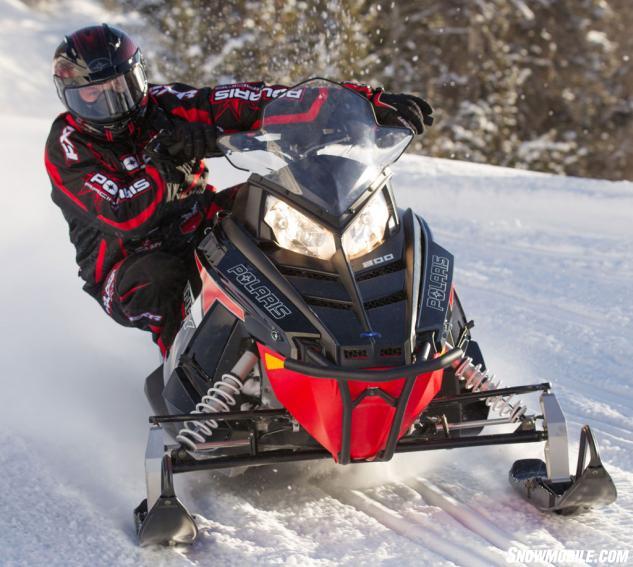 The creation of the all-new Indy SP models hastened the demise of the base Rush models.

You will find that the two Polaris performance models, Indy and Rush, appear similar by-the-numbers on a specifications sheet, but trust your experience. While we truly enjoy the latest Indy SP models, they do not get all the extras heaped on to the Rush Pro-R. Yes, the front suspensions have similarities in function and inches of travel, but the Rush Pro-R controls its 14 inches of motion via Walker Evans piggyback remote reservoir shocks instead of the Indy SP’s Fox gas shocks. You’ll find that suspension adjustments can be made quickly on the Rush thanks to the Walker Evans clicker shocks and the accessibility of the external rear suspension adjusters. You can really establish a personalized ride with the Rush’s Pro-Ride progressive rate set up. This suspension differs from the Indy skid in one major design mode. The Pro-Ride with its progressive rate response is an uncoupled design. 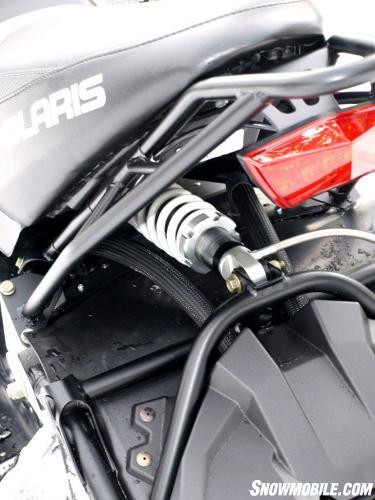 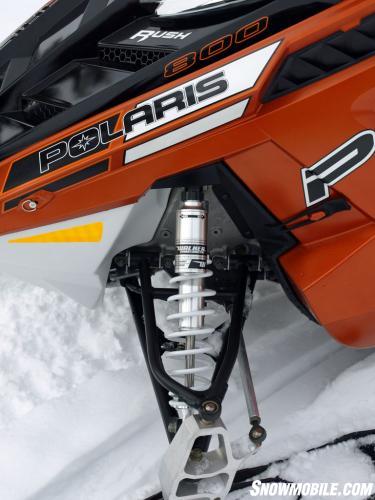 Our pre-Pro-Ride experience with uncoupled suspensions left us leery when we first tried out the 2010 Rush at its introductory ride. We could feel the advantage of the design in soaking up those severe gravity suckers that like to compress your spine to the seat. Frankly, we didn’t really notice any difference in front to rear response when getting hard on the throttle, which was unusual with an uncoupled rear suspension. Normally under hard throttle, the skis come up or, at least, get very light, making it very exciting coming off a corner at full throttle and little ski bite! Polaris engineered in excellent weight transference that feels as secure as what we’ve experienced in the 800 Indy SP with its coupled design.

Things that we like about the Rush Pro-R include the rider integration from its seating position to handlebar reach and hand controls. Consider that Polaris currently makes the most in-demand deep snow sled. It does have to do with lightweight components, power to weight ratio and so on, but it also gets those riders due to Polaris intangibles. It’s these “you don’t quite know why you like the sled, but you do” intangibles. It’s like your favorite pair of gloves or jacket. Everything just feels right. That’s how the Polaris Rush Pro-R feels. It just fits. 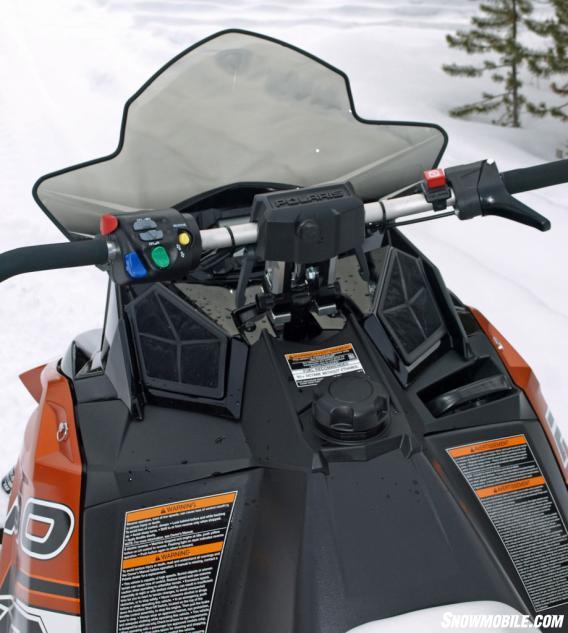 Rider integration between the seat, handlebar reach and hand controls is excellent.

The front suspension works. But it fits the trails thanks to the Pro-Steer skis. Introduced last year, the ski’s evolved keel design allows for a shorter skeg, which greatly eases steering effort. You won’t think about this, but you’ll accept it as one of the intangibles that sets Polaris apart.

As noted, the rear suspension works, but the addition of the Pro-Ride Adventure seat enhances all those rider intangibles. The seat design, with its flat and wide rump end leading to a tapered forward section, leads you to intuitively slip forward to bring your weight up front to corner and slip back to better transfer weight. You won’t even think about what you’re doing – it will just happen. But rest assured Polaris engineers thought it through. They did it because this current crop of sled designers are serious riders. They can work up a design on a computer, but ultimately they give their creations a seat-of-the-pants seal of approval. 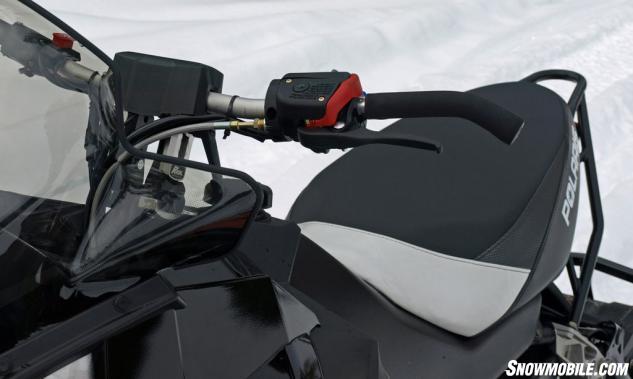 Polaris handlebar design evolved into this one-piece unit with hooked ends, while the Pro-R’s saddle affords wide rear “comfort” area with a nice taper to the front for easy rider movement.

It seems to us that Polaris’ designers and engineers have gotten back to what made them successful in the first place – building sleds that they’d like to own and ride themselves! The company got away from that concept near the end of the original Indy life cycle, but seems to be getting back to its roots. The company’s latest lineup of sleds confirms it. Success in the mountains. Success with the Switchback and its Pro-Ride designs. The reinvention of the Indy. It’s all good.

COMPARISON: Read our review of the 2013 Arctic Cat XF800 LXR

Making the 2014 800 Rush Pro-R a success centers on attention to details. The Walker Evans shocks simply work and are inherently very, very tunable. The progressive action rear suspension works. Overall the Rush Pro-R is easily worth the premium over a similarly powered Indy SP. It has more features and, frankly, better value. While both the 800 Indy SP and the 800 Rush Pro-R come with the same 160-plus horsepower Cleanfire semi-direct Polaris two-stroke twin, the Rush Pro-R offers a TEAM lightweight driven to pair with the Polaris P-85 drive. The Phantom hydraulic braking system uses a lightweight disc. The seat is better, though the new Indy Pro-Ride saddle is pretty close.

We like the 800 Indy SP, but we know that the 800 Rush Pro-R is a better value overall for a serious rider. It has a more aggressive track in the Ripsaw with its 1.25-inch lug profile versus the 1.0-inch lug height of the Indy’s Hacksaw track. When you’re putting an 800cc engine’s power to the snow, you want more bite, not less. The Rush Pro-R gives it. Comfortable cornering and above average bump control are hallmarks of this limited edition 800 Rush Pro-R.

Again, from a marketing perspective, the pricing of the base Rush would have compared to the new Indy SP models, which would have similar features. But, another reason for the discontinuation of the base Rush models has to do with the ever-growing popularity of the longer tracked Switchback models. Stretch tracked sleds are quickly becoming the new standard for trail riders. The Polaris Switchback also comes with a longer bump-bridging version of the Rush’s Pro-Ride rear suspension. Apparently we are not the only snowmobilers who think that the extended Pro-Ride set up is the best rendition of that suspension. It offers all the benefits of the Rush’s shorter design, but adds better bump control and more flotation for getting through unpacked snow. The Switchback’s popularity has to be another reason for dropping the base Rush models.

Even so, serious riders who make their high mile days on mostly groomed trails will find the 2014 Polaris 800 Rush Pro-R well suited to their needs. Plus, if you like the quick turn-in of a short track, blast a berm or two, play fast and furious in the ditches or hit it hard across a lake, the 800 Rush Pro-R is definitely your ride.