Voyager brings back the past with a modern flair

Up to the re-introduction of the current Indy series, Polaris tended to downplay its snowmobile history, which we felt was a serious mistake. Face it; no other snowmobile company has a heritage like the one created in Roseau, Minn. While Ski-Doo enthusiasts will object, we recognize that brand’s emergence only as far back as 1959. Polaris predates that by a scant four snow seasons. Argue if you want that Ski-Doo’s 1959-1960 light-footed, front-engined snowmobiles kick started the recreational aspect of the sport, but by that time Polaris founder Edgar Hetteen and a four-person team successfully drove Polaris Sno-Travelers 1,200 miles across Alaskan ice and snow-covered tundra to prove the viability of the Polaris snowmobile.

Polaris history carries some illustrious names such as the Indy, which was the best selling snowmobile brand for more than a decade. It’s back. And for 2014 Polaris brings back another name from way “back in the day.” The modern Voyager shares nothing with its predecessor except the idea of getting you out into the wilds – and back again! The first Voyagers were incredibly bulky machines with dual tracks that measured 30 inches in total width. They could seat two adults side-by-side. And they could eventually achieve upwards of 25 miles per hour with a 16-horsepower four-stroke motor. Unlike the sporty Ski-Doos of those days, the Voyager could tow upwards of 2500 pounds. Popular with ski slope operators, ranchers and utility companies, the Voyager filled a niche. 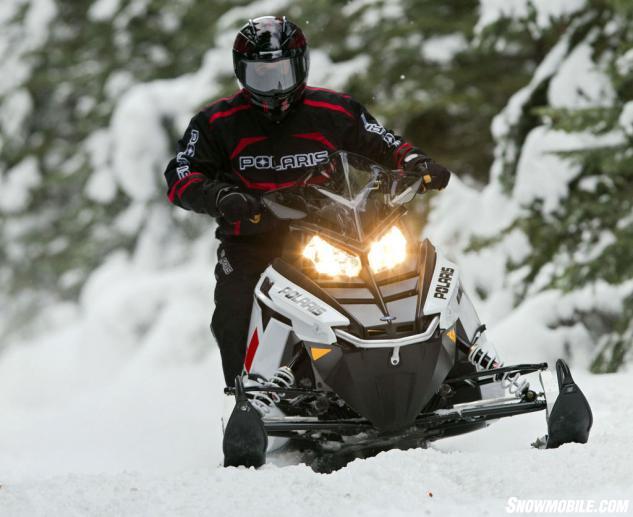 With a long track, deep lugs and low-end grunt, the 550 Indy Voyager can get you off the beaten trail and into the boonies — and back again.

Move ahead to model year 2014 and you’ll see that the latest Polaris Voyager also serves a specialty niche. But today’s version is lighter, faster and more nimble than the vintage version. That’s a very deliberate engineering feat as the 2014 Polaris Indy Voyager blends the best features of the new lightweight Indy with serious capabilities borrowed from the company’s RMK series. The result is a snowmobile destined to find favor with trappers, hunters, reindeer herders and serious ice fisherman. This is a snowmobile that can get you off the beaten track to those hard-to-reach lakes that have the really big fish or get you out to check high country fence lines and such. At less than 500 pounds in dry weight, the modern Voyager instantly gives you more accessibility to the back woods than the earlier generation.

We have to give Polaris credit for some clever engineering. At first the Indy Voyager, which is available as either a 550 or a 600, seems to be little more than a continuation of the Indy 144. To some extent you’d be right to think that, but take a closer look. To maximize manufacturing efficiencies the Voyager utilizes a “straight” aluminum tunnel such as on the deep powder models. These sleds do not accommodate the outside the skid frame shock set up of the Pro Ride rear suspension. They are very conventional with one of two rear skids, either the Indy-type parallel slide rail of the 550 Voyager or an RMK-based unit on the 600 version. 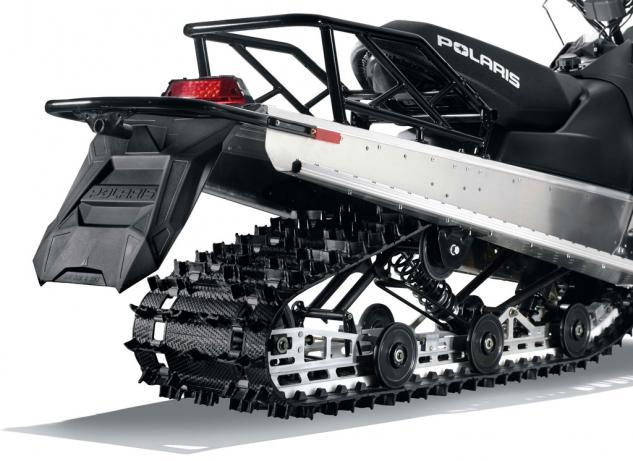 These differences help explain the nearly US$3000 price differential between the fan-cooled 550 Voyager and the liquid-cooled 600 Voyager. While both have narrowed front ends compared to the basic Indy models, the ski stance can be changed on both, with the 2014 Voyager offering three widths. You’ll find that the Voyager bears a close resemblance to the 600 RMK 144. Both feature a ski stance that can be set to 39 inches, 40 inches or a maximum of 41 inches.  This comes from the use of shorter RMK-sourced A-arms and the addition of the high flotation Gripper skis. The 600-engined Voyager offers upwards of nine inches of front suspension travel that is controlled by RydeFX MPV shocks. 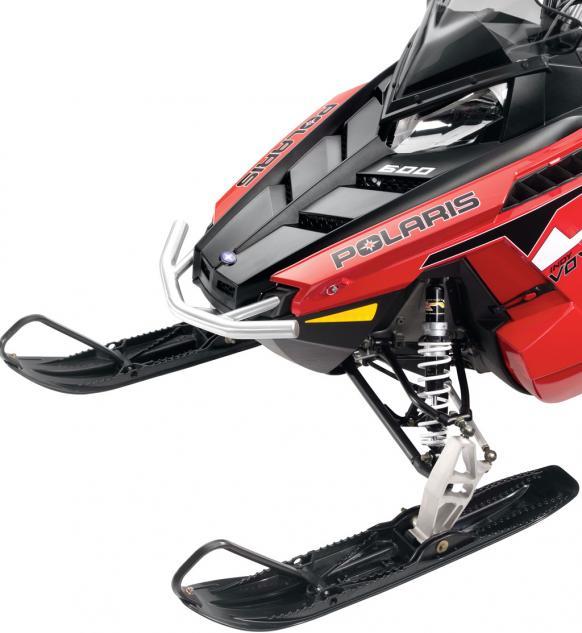 To enhance off trail capabilities, the Voyager front suspension features the shorter A-arms and Gripper skis common to the 600 RMK.

While both the 600 and 550 models offer more than 14 inches of bump absorption, the 550 features a coil-over spring rear design while the 600 gets the cleaner through the snow RMK-type rear suspension. Both models utilize RydeFX MPV shocks to control travel. Add in an Indy Pro-Ride seat with widened rear and narrow tapered front area and you have a very comfortable launch platform to either sit back on or move forward to attack the trail. Polaris has done a very good job with its version of ride-forward design.

The real obvious difference between the two 2014 Indy Voyagers lies under the hood. The 550 version gives you honest but basic performance from a Fuji-built fan-cooled two-stroke twin. The visual giveaway to what’s under the cowl is the console-mounted choke flipper. The 600 Indy Voyager is all Polaris Cleanfire semi-direct Injection, which means the 599cc twin fires up with no hesitation and is ready in an instant to get you off groomed trails and into the boonies. Power-wise the 600 will provide more than double the horsepower of the 550 fan-cooled engine. 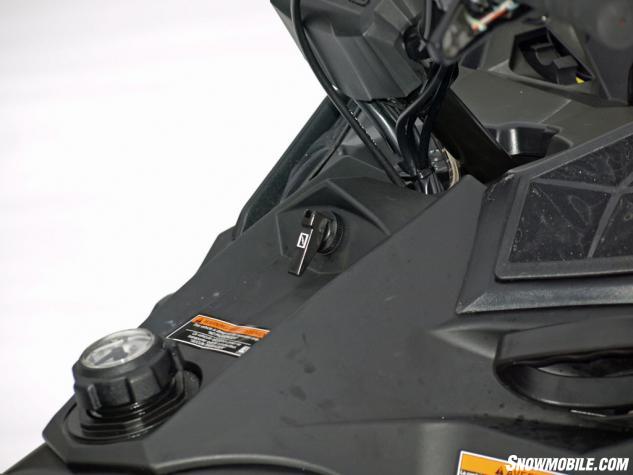 Your visual cue to the 550 engine comes from the choke lever on the console.

That also accounts for the 600’s use of Polaris’ proprietary P85 drive clutch with P2 driven. A signature drive set up, it’s what you expect to see on a liquid-cooled Cleanfire twin. The 55-hp fan-cooled twin works with a proven CVTech Powerbloc 50 clutch that is incredibly durable and should be extremely reliable. It’s exactly the type of powertrain that you want if you head off into unpopulated tundra.

Don’t assume that the greater horsepower of the 600 Voyager will suit you better. You need to look at where and how you plan to ride. The 550 Voyager is more than 30 pounds lighter. Most of that is a result of the air-cooling versus the liquid cooling of the 600 twin. The 550 won’t achieve the acceleration and top speed of the 600, but you should get a slightly better float over the snow. Of course, Polaris engineers took the 600’s heavier weight into account and fitted the deep snow RMK Series 4 Track to the top of the line Voyager model. The 550 Voyager features a Cobra track with a 1.35-inch lug height for off trail grip. 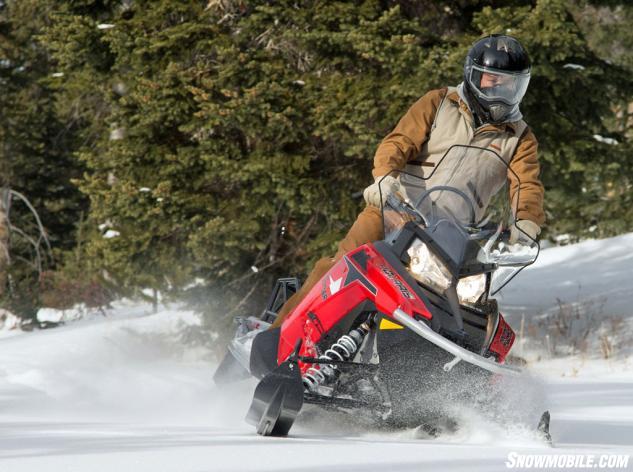 Polaris added a Series 4 track with 2-inch tall lugs to maximize the off trail snow-ability of the 600cc Indy Voyager.

Because there were more snowmobiles sold outside the US market last year, Polaris deliberately fitted the Voyager with features that fill a need for the more rustic areas of Scandinavia and Russia – areas with few groomed trails. The company expects the 2014 Indy Voyager will cover a good range of needs and wants. While the 550 Indy Voyager may be what a snowmobiler needs and fills the bill for durability and initial cost, the 600 Indy Voyager is what more snowmobilers will want in the areas of speed, acceleration and deep snow performance. Both will be reliable and offer a sense of the original Polaris Voyager’s ability to get the work done. It’s just that the modern day Voyager does it with more style.